Gumihorn 2100 m. Highest point of Schynige Platte, forming its landmark as a tower with a rounded summit, which appears hard to access. […] As the summit requires climbing, it is rarely visited.

(translated from a guide book of the Swiss Alpine Club) 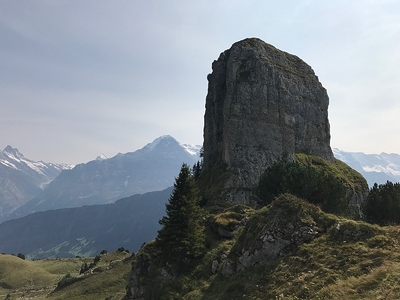 Gumihorn HB/BE-134 is not an ordinary summit. While it is just a short hike away from the top station of the Schynige Platte Railway (a nostalgic rack railway that takes about 50 minutes from Wilderswil/Interlaken and is very popular with tourists from all over the world), getting to the actual summit is a different story. It has been activated a couple of times in the past, with OMs finding that they had to delete their activation afterwards as they had not actually reached the activation zone.

Clemens HB9EWO, Matt HB9FVF and I have decided to activate this unique summit properly, i.e. by actually climbing it. The activation took place on September 8, 2017 under the HB9SOTA club callsign. Despite difficult HF conditions (solar flare), we managed to make 56 QSOs in total (11 unique callsigns on 2m FM). 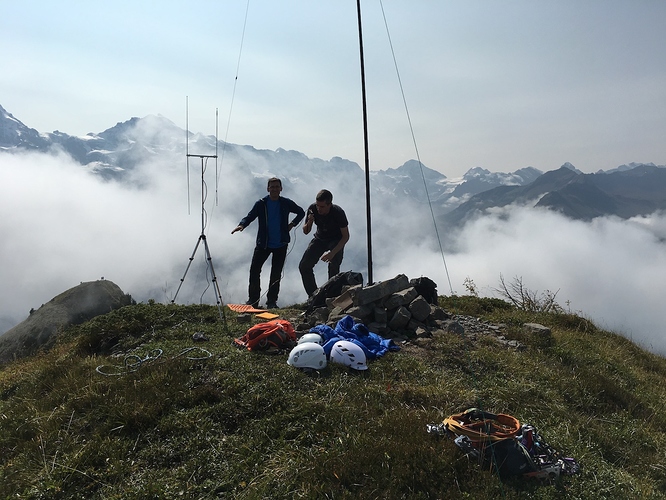 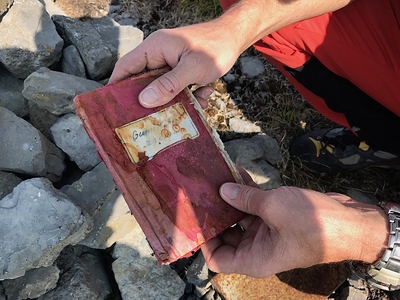 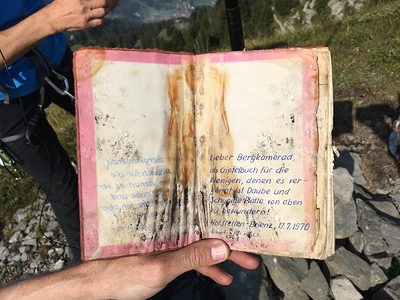 “Dear fellow climber, a summit book for those few who have the privilege of admiring Daube and Schynige Platte from above!” 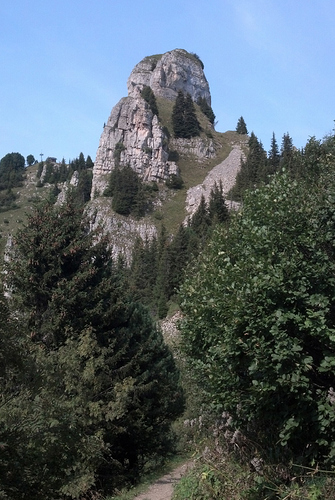 The normal approach is to go up the increasingly steep southeastern grass flank, climb up the rock face about 20-25 vertical meters to reach the ridge, and then follow it to the flat grassy summit. The climbing part is not particularly difficult, but it would be a bit risky without belaying. Descent by abseiling. 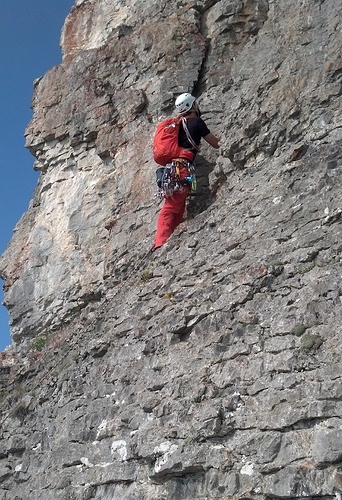 One other activation from 2010 remains, which according to the activator has taken place in the grassy southern flank. We have tried to determine the elevation at the highest point that one can reach there before the rock begins, by using the barometric altitude sensor in a Garmin device and in an iPhone, calibrated at the summit just before the descent. The measurements agreed to an altitude of 2070 m, which is four or five meters shy of the necessary 2074/2075 m (SOTA DB lists the summit at 2100 m, the latest maps put it at 2099 m) – and in any case it would be pretty awkward to activate in the grass section just below the rock. Another easily accessible point just below the north face was determined to be at 2059 m. We therefore conclude that a valid activation of Gumihorn demands climbing up the rock face. 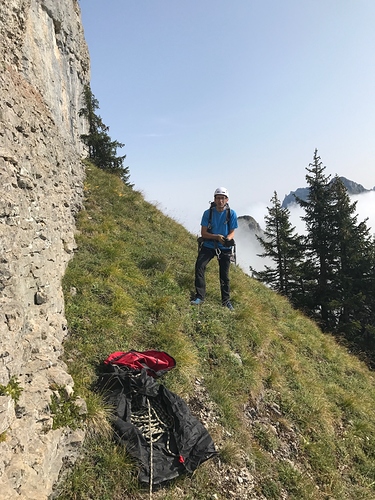 Clemens in the grassy flank, highest point reachable without climbing in the background

Congratulations on the activation. Stunning scenery.

Many thanks for your perseverance on what looks like a very difficult climb,well done all and thanks for the new one and the write up with pics. Great. 73 Don G0RQL.

Some SOTA activations are just more epic than others! This definitely is one of the epic ones! I was at the Schynige Platte this summer, and although I had to miss it due to being at work, I really had the urge to do an entry about your activation of Gumihorn on my blog at http://pa7mdj.blogspot.com.

Congratulations Manuel, Matt, and Clemens for the great achievement!

PS: can you please do it over again in a weekend

A cool thing for a funny summit, activated properly, hi.

Congrats for activation and report! The tourist location is a very nice place even without a SOTA activation.

Dear Michael
thank you very much for this report in your Blog. pity you could not work us. It was a very nice activation. We look forward for other sepcial activations.
vy 73 de Matt HB9FVF

Wow, very impressive! Congratulations on the proper activation.
Thanks for the CW contact on 40M.

One other activation from 2010 remains, which according to the activator has taken place in the grassy southern flank.

For the record: Marco HB9BGG has deleted his activation from 2010, as it was outside the AZ according to our measurements. Thanks for the fairness!

That is one really nice summit! What grade was the climb?

…and for those who have not yet seen enough, given a few pictures, in a short slideshow:

Hi Matt, manuel and Clemens,
Super for this one. In 2016, i was looking for a summit not too much activated in Swiss. So i found the Gumi and decided to go !
What was my face when i have seen this rock in front of me !
i turned around for a while to find the way to climb, but no way, i had no equipment. I was wondering how the HAM did to activate it. The activated zone was not reachable for sure.
So i put of my staff exactly where you start to climb and i chase other friend on air.