With what looks like settled weather in Scotland this week I am heading up there on their Bank Holiday (January 2nd) with a plan to activate 4 X SOTA Completes. It will be lovely to get outdoors after eating and drinking far too much over the Xmas / New Year period, and get some fresh air and exercise again.

To save time on Wednesday only 2m FM will be used on White Comb GM/SS-030.

HF CW/SSB will be used on the other three summits. If the weather is kind and I have time I’ll operate on 40m, 30m and 20m although I may run short on time on Wednesday afternoon on Law Kneis SS-168.

Here is the plan:

Nice one Phil Gerald and I just had a great stay at the Tushielaw Inn while we polished off the “Moffat Four” (Ettrick Pen, Capel Fell, Croft Head and Scaw’d Fell). Wish we’d known about it when we did the other summits in the area, it’s an ideal base and the proprietors Rab and Gail are accommodating to a degree that has to be experienced to be believed! And the food’s amazing… now looking for an excuse to go back

Have a great time Phil, I’m not at all jealous

This crystallises my plan for Wednesday. I will try for G/SB-006 Shillhope Law for 12:00z.

Great news from you both - thanks, and it just shows that tipping off activation announcements on Discourse can pay off.

Yes Paul, never stayed at Tushielaw Inn before but David G0EVV mentioned it must have been a year ago Paul. Its taken me this long to get there on an overnighter. I’ve now got to the stage that single day trips from North Yorkshire to the Scottish Borders or Snowdonia are not sensible, especially in winter and I assessed that two each day would be enough without risking getting benighted.

Well done Paul on your Twixmas SOTAing - I was unable to come on the radio as I was in Cardiff visiting family for 4 days.

For Andrew I will keep my radio on with 1/4 whip when walking using my recently purchased chinese speaker mic with clip. Looking at our profile, once you start rising out of the valley we should easily work across the 44 mile divide. 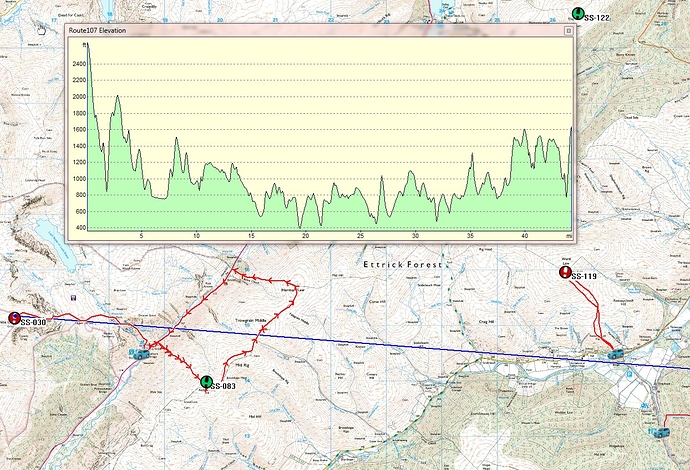 Hi All
Dave G3TQQ & I plan to be on G/LD-035 & G/LD-037 tomorrow and we will be carrying a handheld with us whilst walking. Good luck tomorrow and Happy New Year!
73
Nick G4OOE

I will be working in the Carlisle shop this week so will have a listen if i see a spot. The distance is about 40m and you have a good height advantage for me. It should be possible to work you but i work in a low part of Carlisle so i shall see.

I wonder what power you will be running on the Mell’s?

It will be 30 - 50 watts so hopefully it will be enough for us to make contact.

Just a brief note regarding the route up Ettrick Pen. If you are using the track shown on the OS running to a point roughly WSW of the summit, you will find it has been extended to facilitate new planting on the hillside. The track up is hard to see, but is marked by yellow tape on bamboo canes. It heads off up the hill about 30 or 40m after the start of the new track, running up through an unplanted area which will become a ride. Eventually you will see the path becoming clearer. I hope this helps. Note there are other coloured markers just to confuse things!

I might be able to chase you on White Coomb, but only have 2m as I am up in Northumberland at present, so won’t be able to work you on the others.

It looks like I may pick up a few chaser / S2S points on my trip over the border tomorrow - can’t be bad Andrew, Dave and Nick. For Geoff I should make it into Carlisle from White Coomb and maybe Northumberland to Gerald, but it is one big county! I usually work Derek 2E0MIX also on 2m FM if the summit is prominent enough. I will take the handheld up the other 3 summits with an RH770 extended whip and call on 145.500 when I get there.

Noted Gerald about Ettrick Pen, I remember looking at it a couple of years ago from Croft Head, but it was a bridge too far that day. I plan to walk up from Over Phawhope so intend approaching from the north west. I’ll park at the end of the yellow road at the sheepfold NT189092. The bike is staying at home for this trip.

Yes, we parked at the road end for Ettrick Pen and walked past the bothy (too posh by half) to the track towards the hill. We used the same parking spot for Croft Head and Capel Fell. Scaw’d Fell was from the parking spot by the bridge. Our total for the 4 summits was around 25 miles… my ankles sure ache after a modest 5 mile coastal walk today!

Enjoy the Tushielaw Inn. It is certainly different from our usual bland Travelodge accommodation.

marked by yellow tape on bamboo canes. It heads off up the hill about 30 or 40m after the start of the new track,

Bit more of a pointer…

The path leaves the track at about NT 19042 07683, just short of the 500m contour, and just beyond where a drainage ditch across the hillside is cut across the track. It heads ENE up the shoulder to about NT 19671 07922, from where it goes SE to the summit. We of course discovered this path on the way down and it saved us about 350m with easier walking.

Thats good info Gerald, Thanks. I was going to cut up at the track from around the on 450m contour and head due east but I’ll continue now on the track a bit more to the drainage ditch before branching off.

Worthwhile staying on the track as otherwise you will be going up through the new planting. You will see what I mean when you get there. I recall the drainage channel being as Paul describes it - a useful visual pointer. Will try to get on tomorrow to work you from somewhere near Alnwick… if the Cheviots allow.

Hoping rhe east - west path will work. Bizarrely Alnwick is almost as far north as White Coomb. The Cheviots lie north of the path, so here’s to hoping…

Alnwick is almost as far north as White Coomb

There are just over 60 GM/SS summits that are south of Alnwick. We tend to forget the shape of this country. Just like Edinburgh is west of Bristol.

Unfortunately Phil’s signal was not strong enough to get across to Shilbottle Beacon. I should have applied more thought and brought the beam up to Northumberland. I could detect Phil’s carrier and mod on SSB mode, but it disappeared into the mush when I switched to FM. Say no more!

A great day for sure for me, guys. I feel on top of the world!

As GM4CXP in Kelso said to me today in QSO “Its SUMMIT to do”!

20 QSOs on 2m FM with my 50 watts from White Coomb - best DX in my friend Victor GI4ONL who as my last QSO, was scraped out of the “back of the set” as the CB fraternity say. GW4ZPL/P in Anglesey was also logged. I made a contact into my home birth county of Lancashire (until age 36 - not a lot of people know that - they take me now for a Yorkshireman). This was a station in Accrington, Lancashire. 4 S2S QSOs were logged with G4VFL/P, 2E0MIX/P, G4OOE/P and G3TQQ/P (This is Dave’s original young mans callsign issued “in the day” as folk now say). The path up the side of Grey Mares Tail up to Loch Skeen was heaving on my way down on this local Bank Holiday (Scotland not England) and the Scottish National Trust Car Park was heaving with cars - £3 per day unless you are an NT member.

I set off from Grey Mares Tail CP in the car to SS-168 car park spot (22 miles) and as I passed St Mary’s Loch by the superbly restored AA box in the /M, I heard G4OOE/P call CQ from Little Mell Fell LD-037. Amazed as I was, to make an instant easy QSO when I was surrounded by mountains such as SOTA Andrewhinney Hill, which I activated around 2008/9.

The climb to Law Kneis SS-168 was pretty awful I have to say - a mere 1.8 Km with 272m ascent, but it took me 63 minutes due to the terrain and forestry fallen trees to circumvent before I reached the rotten fence posts which line the summit. I came back down through the forest the same way, however when the graded forestry road was reached, as it was dark on my way down, I used that, doubling the distance walked to 3.35 Km, but it was safer than the really nasty steep dead bracken section encountered by the side of White Sike, which I tussled with on the way up. Coming down took me 59 minutes, a win-win I reckon. It was an expensive 1 pointer, but worth every penny to me as it is a SOTA Complete, my raison d’etre to reach 1000 before I too old for “Summit to do”… The route will as always. be uploaded to the SMP with the appropriate caveats, as I like sharing information.

The activation was OK (No OK actually worked) but not brilliant, using 20m, 30m and 40m I only netted 18 QSOs. K3TCU and K4DY were worked on 20m CW, the rest were all EU (No G stations - skip too long at that time) and unsurprisingly there were no S2S. 2m was monitored throughout with a handheld and long whip - nothing heard at all. Good job I didn’t rely on it like I did on White Coomb… Elecraft KX2 and link dipole as inverted vee at 5m AGL.

Two more summits on HF are skedded for tomorrow near to the pub where I staying - Gerald and Paul were right - the proprietor cannot do enough for the solo guest (which I am) tonight. Being a Scottish Pub they were full and packed to the gunnels, serving meals on New Years Eve.

Tushielaw Inn - recommended and surrounded by GM/SS summits in the Ettrick Valley. I have no commercial interest. I’ll definitely return here, probably with the XYL and dog Treacle. Excellent value - more in line with EU prices for a single guest at £35 per night en-suite with cooked breakfast.