Copied from my Blog 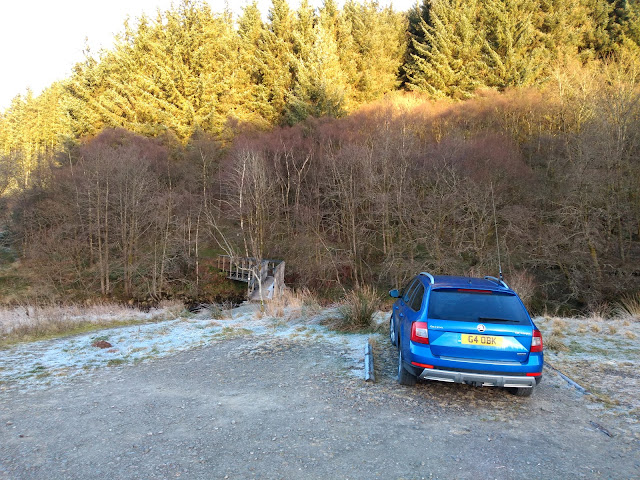 My research on climbing Law Kneis led me to the walkhighlands sub2000s web page where I found several “tales of woe” describing efforts from hillwalkers who had climbed it. In the end I opted for the steep and awkward climb by the side of White Sike burn to reach the forest track. I then followed an awkward and difficult forest ride to the summit itself. You’ll see from the map that I did not return alongside White Sike - it was too dangerous to contemplate descending this way in the dark, the wide graded forestry track traversing the side of Deephope Hill was an excellent alternative, and as I was walking down I wished I had gone up that way: 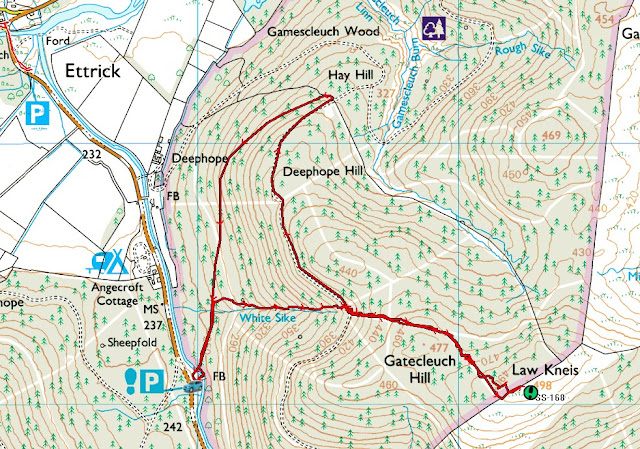 I don’t recommend the rough walk route up by White Sike. Future activators may have no choice but to tackle the forest ride which heads east from 286133 though, unless they know of anything easier. There were around 10 fallen trees to negotiate in this forest gap on the ride and the boggy sections were all frozen, so it wasn’t all bad - not that I will be returning for what is just a one point 498m high summit. 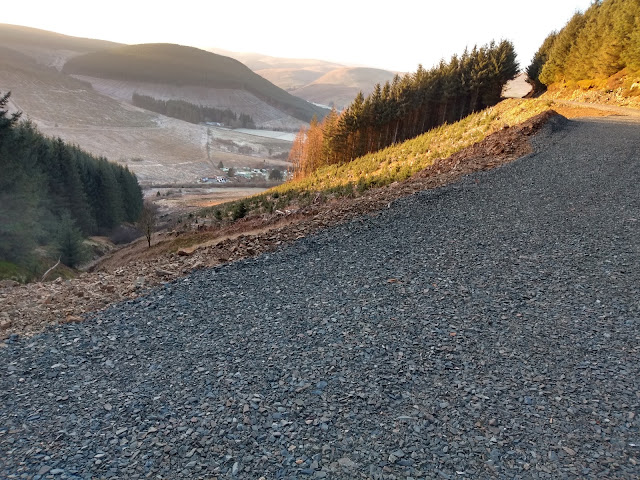 As I exited the forest almost on the highest point it was approaching dusk and I found a place along the old fence. The posts were rotten, but strong enough to support my aerial pole and home brew link dipole: 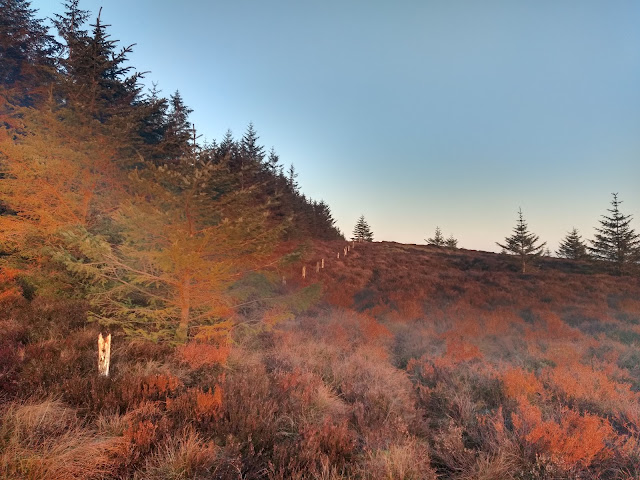 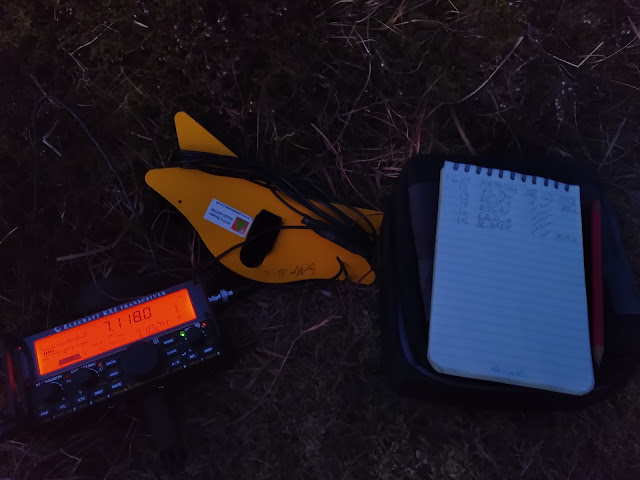 HF operation on 20m, 30m and 40m was successful, 18 contacts were completed, including K3TCU and K4DY in USA. The usual lightweight KX2 and link dipole at 5m AGL were used. Unsurprisingly from such a remote place, VHF with a handheld with long whip fastened to the fence post was ineffective. Constant monitor on 145.500 MHz for almost an hour proved fruitless… 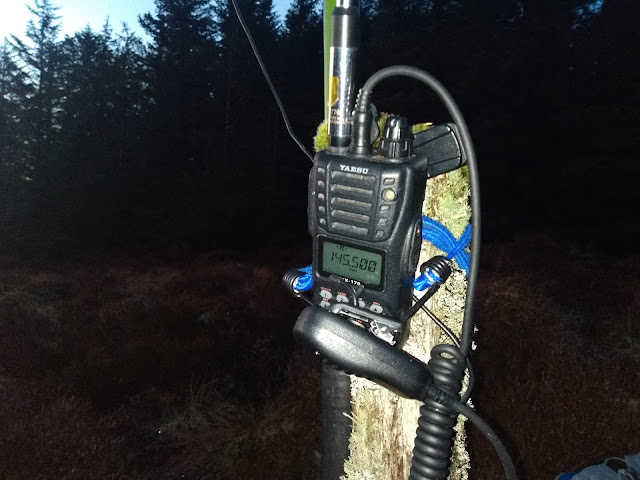 Here is the bag I won in the SOTA raffle at Ham Radio in 2018 - I use it stowing my aerial etc in my rucksack: 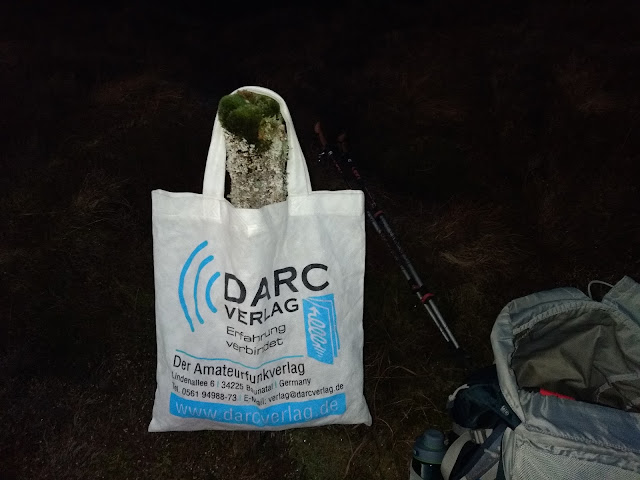 Walking off was most enjoyable with the headlight illuminating the sparkling frost in the ground surface throughout the length of the forest ride. The decision to take the safer track pictured above was made - once I overcame the bad step down the bank on to it and my car was reached exactly 3 hours after leaving it. The GPX track for this route both ways is lodged in the SOTA Mapping Project Tracks page.

Yes that is horrible ascent the way you went Phil. I had been advised not to attempt the direct route up White Sike.
I used my mountain bike to follow the track, first NW from the river bridge and then S, contouring round the bend to just off the bottom of your map to NT28834 12748. I then ascended aside the fence through a reasonable fire break on fair ground travelling NE. I enjoyed the fast descent and in my enthusiasm almost forgot about the road barrier! I listened for you when you were on the Ettrick Pen but too far for 2m VHF and too close for 40m. Nothing heard.

Hope you enjoyed the Tushielaw hospitality.

Interesting to see that the forestry management is zero. The fallen trees were present when Paul and I activated the summit in April 2014. An extract from my report:

The easy access provided by the forestry road was only employed for a short distance until we passed over a stream and gulley shown as White Sike on the OS map. Thereafter, our route required us to turn right off the road and ascend the steep hillside, actually walking up the debris remaining from the felling operation. Despite the steepness of the hillside, the going was quite easy at first and we made good progress. We stopped for a breather part way up where we could see a sheep fold in amongst the debris, which showed that this had been grazing land prior to the forest being planted. The route up the hillside slowly became more difficult and slow and it was with some relief that we reached an old forestry road The report on Scottish Hills advised that from this position, the central of three rides was the one to take to get access to the summit. This proved to be entirely correct and we made good progress along a reasonably wide firebreak, turning right after about 400 metres. A number of fallen trees had to be negotiated - evidence that others had cut their way through was clear to see. Generally the gradient was quite gentle apart from one section which warmed us up. We exited the forest and turned left and heather-hopped to find the summit marked by the smallest cairn that I have ever seen. It was now 09:15, which put us well ahead of schedule.

The return route via the forestry track was a wise decision:

On reaching the old forest road, we decided to avoid the felled section below us by walking close to the stream along White Sike. Here the ground still had to be negotiated carefully, but it was far preferable to descending down the debris, which was now visibly damp and would have been very slippery.

Overall not a bad summit. Certainly as enjoyable as many others in that area. Unfortunately there was no chance of working you as I only had 2m with me at the time. Well done on what you worked.