The forecast was for a hot dry clear day. We wanted to get up high where we hoped it would be more tolerable for walking but getting up high normally involves walking from low level. The gondola up Aonach Mor would enable us to start walking from 650m, but there would still be over 700m more ascent over Aonach Mor and briefly down and up to Aonach Beag at 1234m.

We had hoped to get to the Gondola base around when it opened at 10am, be we didn’t get our act together to leave the cottage early enough and then had slow traffic through Fort William. So it was about 10:30 before we parked at the Gondola base. It was busy in the car park, which had an area taped off where a helicopter was repeatedly landing and taking off with building materials being ferried to work being done near the top station. It was around quarter to 11 by the time we had got our rucksacks and poles into a state that they could go in the gondola. We didn’t have to wait long for one to take us the approximately 15-minute ride to the top, taking in the views. At the top we had a brief look round, used the conveniences and attached poles to our rucksacks and were on our way around 11:15 heading upwards towards the Aonach an Nid ridge by the ski fences.

We wanted to get the gondola down, though walking down was a possibility if we missed the last gondola due at 18:00, so we timed our ascent. We soon left behind most of the other gondola users who were either aiming at the restaurant, the bike track or the paths going our roughly horizontal to viewpoints. The first section up to the ridge was the hardest: relatively steep and under hot sun with clear blue skies. We stopped to take lots of photos, and observe the helicopter going to and fro. 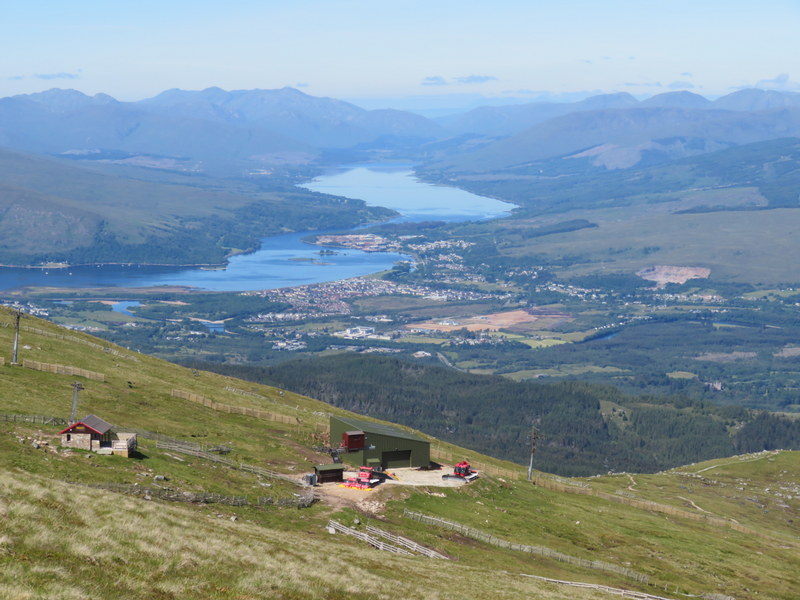 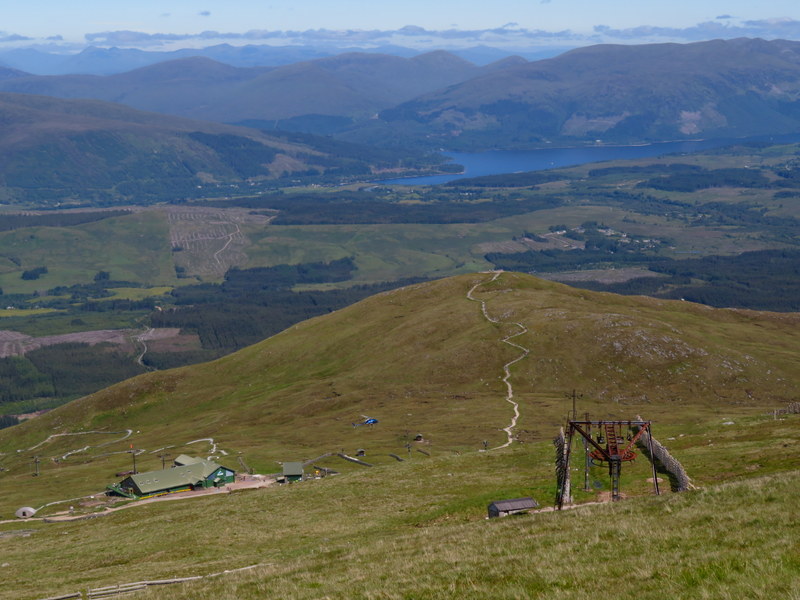 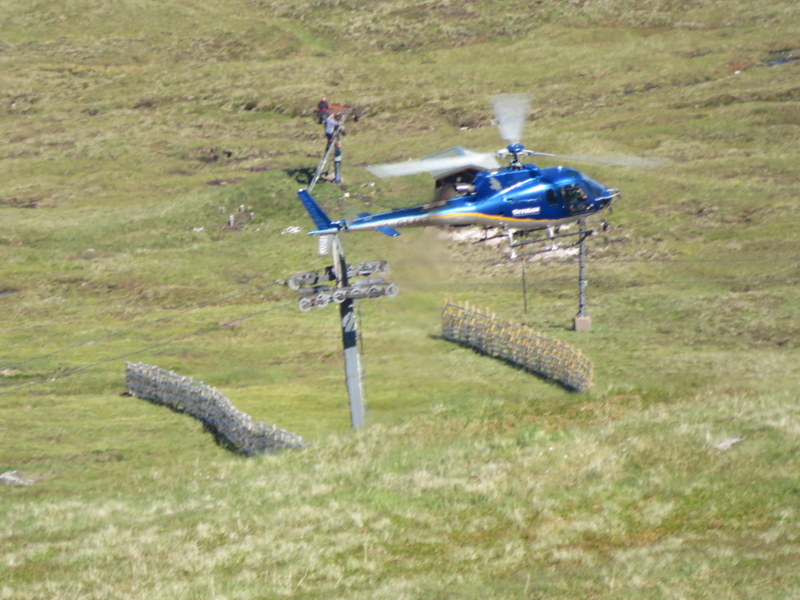 Once on the ridge even more views opened up towards the Grey Corries and the going became easier, until passing the top of a ski tow we were on the Aonach Mor plateau, with the mass of Ben Nevis coming into view. Heading towards the west side of the plateau we got increasingly good views of Ben Nevis. Martyn used the zoom on his camera to take photos of the summit, from which we could see that it was very busy on the Ben, with people standing on the trig point: unsurprising on such a bright sunny day. Once away from the gondola area we probably saw no more than a dozen other people on Aonach Mor and Aonach Beag: good to be away from the hordes! 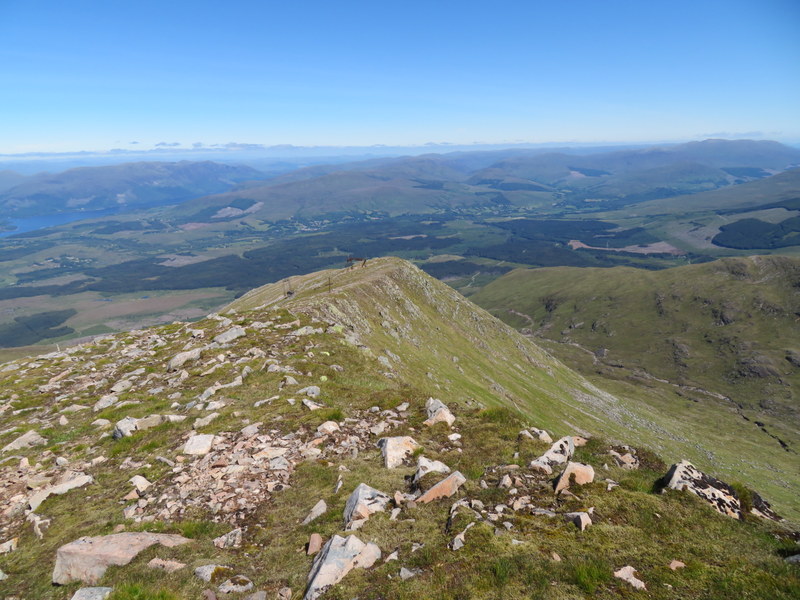 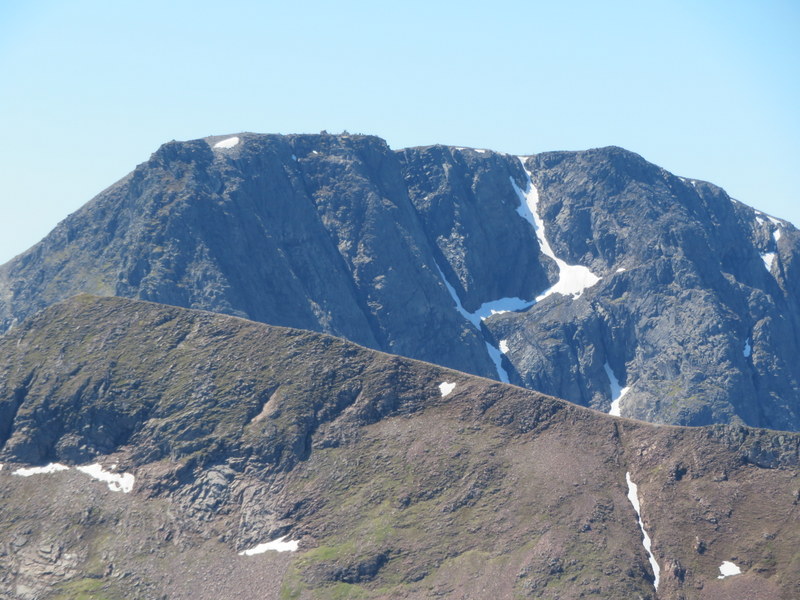 Continuing on to the Aonach Mor summit cairn we then had a gentle descent of around 134m to the col between it and Aonach Beag with a narrow section with a snow patch still present on the eastern side. The path up the other side was steeper and stonier, leading to a cairn on the stony barren top of Aonach Beag. Now there were also views to the south towards the Ring of Steall and of course Ben Nevis loomed to the west. 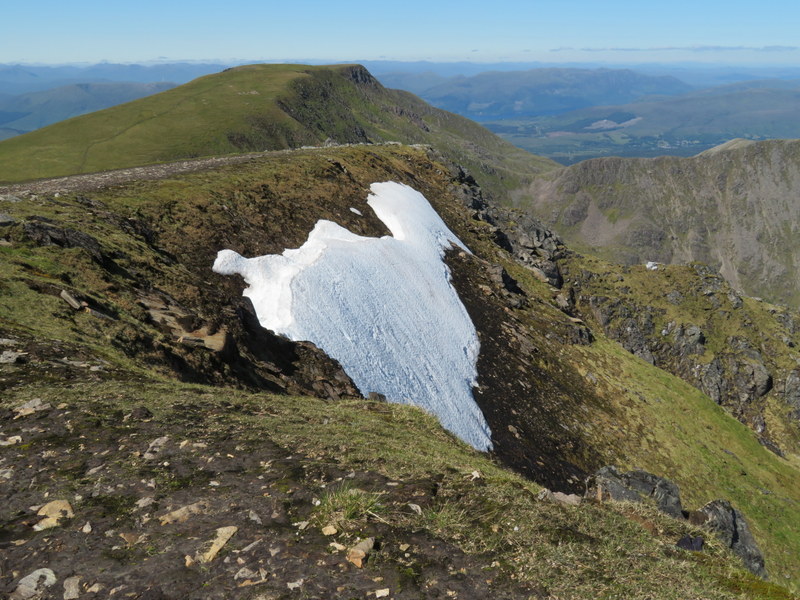 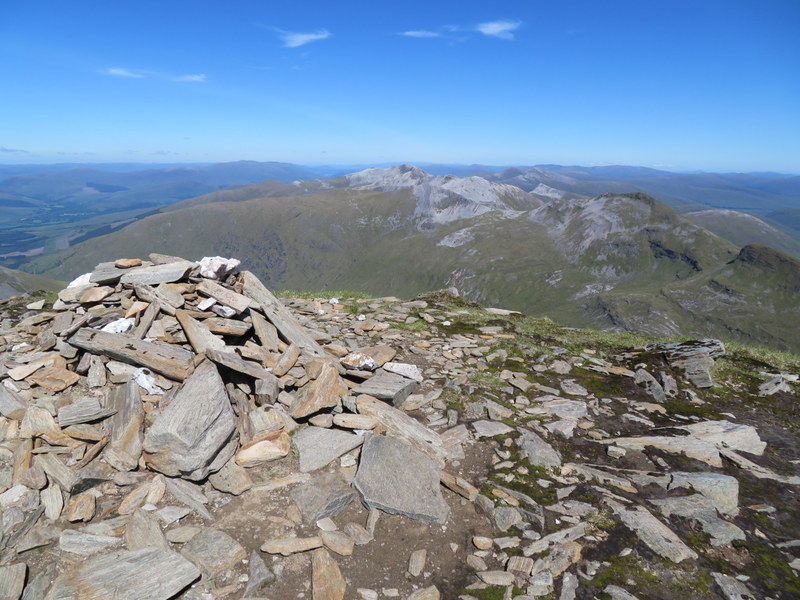 It had taken about 2 hours 35 minutes to get to the summit, and we thought we should allow a similar time to return, although we hoped the descent from the Aonach an Nid should be faster than our ascent. That meant we had an hour and a half at the summit if we were to be sure of getting the gondola down. On the ascent we had chased Rob GM3YTS on Stuc a’ Chroin, but he had unfortunately gone by the time we got to the summit.

We moved away from the summit cairn so as not to disturb any other visitors, though there were few given the weather. It was lovely sitting on a 1234m summit in shirtsleeves under blue skies playing radio. Caroline was surprised to only get 6 2m FM contacts. Martyn found 5MHz in poor condition managing just 3 contacts, so he grabbed a 2m FM contact to qualify, before moving off to 40m. It was in better condition and he got 8 contacts, before Caroline pointed out he still needed to eat a belated lunch before we left, so she took over 40m getting another 10 contacts. 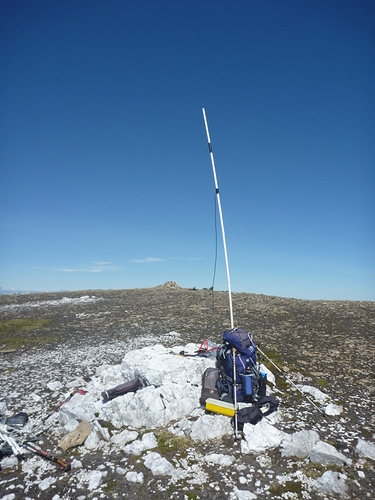 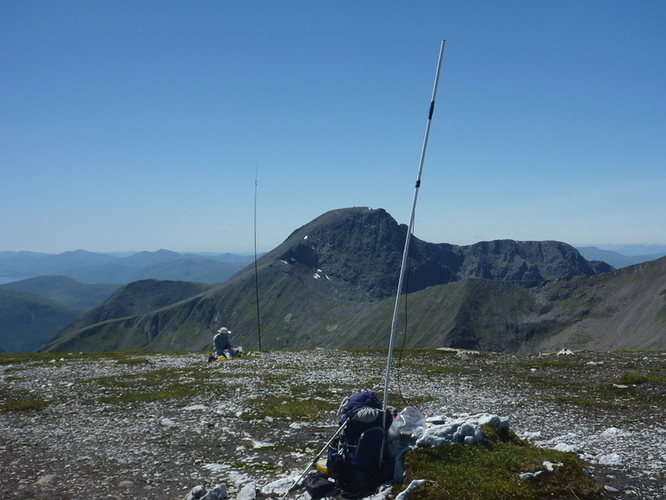 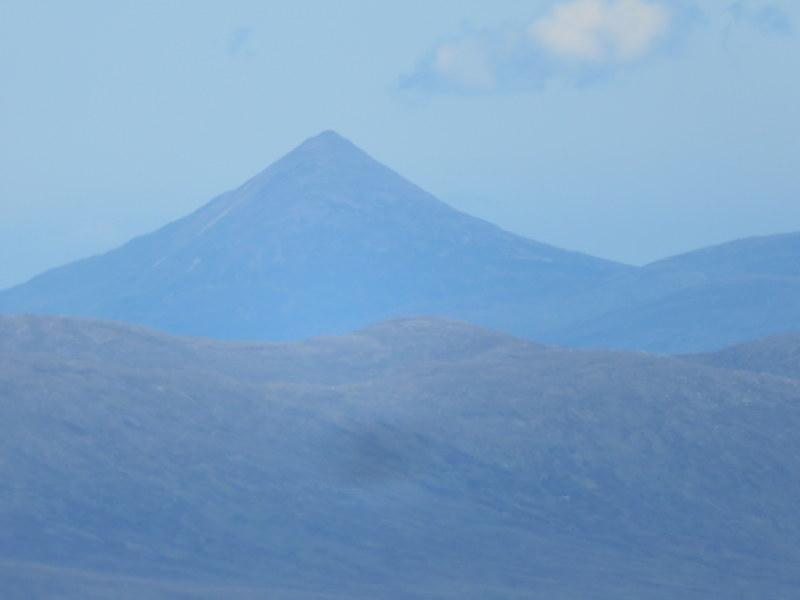 The return basically retraced our steps, but this time along the eastern side of the Aonach Mor plateau for a different set of views. We were back at the gondola top station in 2 hours from the summit, so plenty of time for the gondola. Part way down the gondola stopped for an extended period, and when we got to the base, we realized it was probably because they had been unloading a wheelchair. We hadn’t had time for our afternoon apple, so ate them at the base and took a walk round the base to look at the gondola in action and noting how they detached the gondolas from the cable and sent then round some sort of points to a storage area. 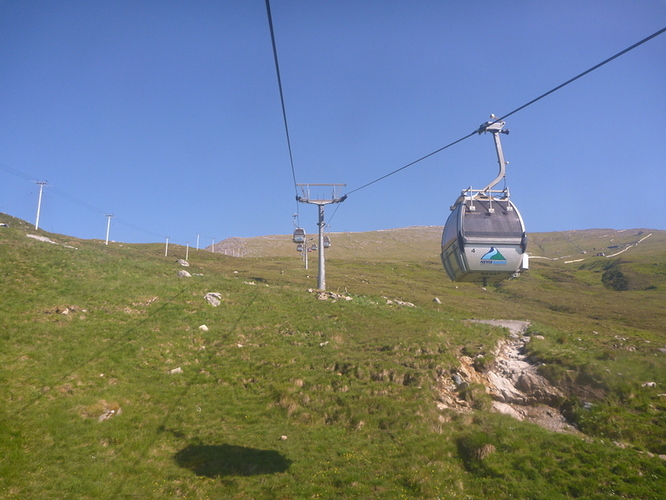 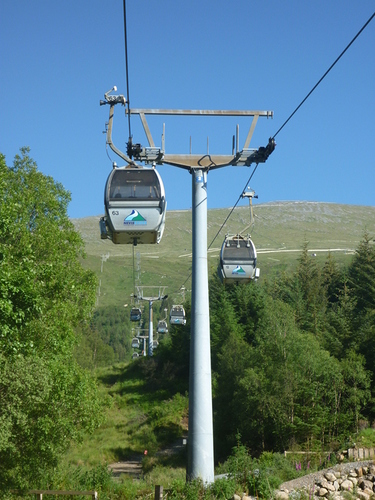 Great pics, thanks for sharing. I love Schiehallion, one of my favorite beers

Zoomed into Ben Nevis about 4km away, with hoards on top! 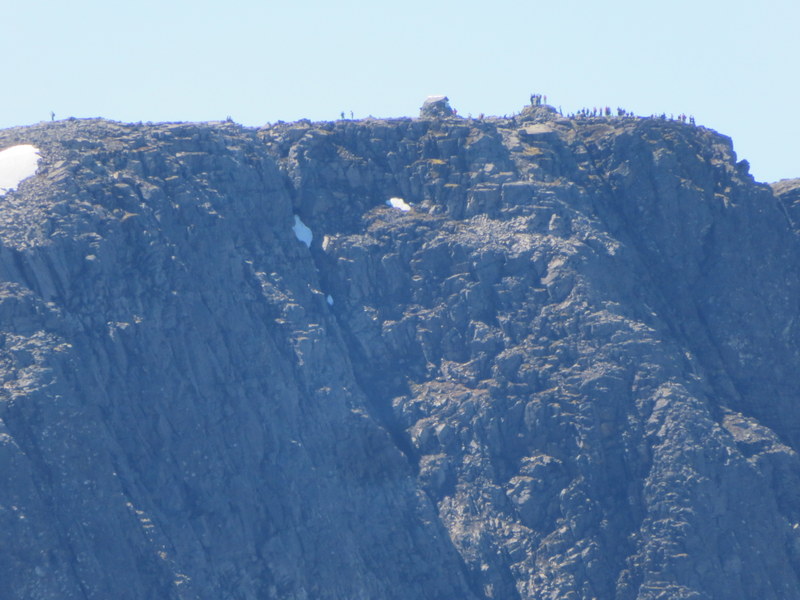 Great report and stunning views that particular day. Sunburn weather I don’t doubt. I love WS2 and I bet you do too after that day out. Brilliant camera. Hope it’s not too heavy.

It’s a Canon PowerShot SX720HS, i.e. a “superzoom compact”. In a carrying case, with a spare battery, it weighs around 385g.

This photo was taken at the maximum zoom, focal length around 960mm in 35mm equivalent terms. The hardest part of taking photos like this is actually getting the desired subject into the frame. I don’t know how the image stabilisation works but somehow it does.

I have to say that I was surprised by the detail it picked out in this photo. Far more than I could see with my aging eyes. Nowadays I quite often take photos of things on the horizon just to see what they are!

Great report and stunning views that particular day. Sunburn weather I don’t doubt. I love WS2 and I bet you do too after that day out.

Yes, it was a fine day on the hill and we do like WS2. Definitely recommended, though I wouldn’t like to do it on a miserable day: there didn’t look to be any shelter in bad weather!

I both burn easily and am attractive to flying things that bite, so go for long sleeves and full length trousers even on hot days. I probably look a bit odd on a sunny day as I also often wear thin fingerless gloves both to protect hands against sun, and because it stops my hands getting sore from rubbing on walking pole handles! We needed sun hats and sun cream on the little remaining exposed skin too!

Yes, amazing detail and I can see WS1 is heaving. Nevertheless I wish I was there to do it again. I like the camera after looking on ebay but not the price and maybe not the size for trouser pocket convenience. I can see the value for use as an impromptu telescope however and to get really great photos. I have had so many second hand digital cameras (for about £20 to £40) that I’ve lost count and I usually wreck them within a year. Very often it’s the lens that sticks and I’m on that stage now; it needs to help to retract. I don’t know whether I dare get one like yours but it’s a thought.

Thanks for those tips Caroline. I too react badly to sun and heat. Like you, backs of hands have been ‘cooked’ a few times over the years. If I use sun screen (very rare - rather have a big hat) I have to remember to keep it below eye level for when it runs. I fully agree with you. Cover everything possible in summer or better still, do most of it in winter as I’ve been forced to do.

Yes, WS2 is a windswept top. Luckily I have only been there when it’s not been too bad. You could get down over the edge but it’s a bit too steep for safety. It was good to see the quartz outcrop in your photos. I brought a nice lump back from up there. It’s still on the window sill to remind me of that lovely mountain.

You did well! It’s a fair walk even with the assistance of the cable car.
73, John