The forecast was not good: showery at first with heavy rain later, so a day for wearing the waterproof trousers and doing hills without too long a walk in. The two one pointers in the Sidlaw Hills fitted the bill, and the weather was fine when we got up, so we got things together and drove south.

The sun was shining brightly as we parked in the small parking area for Dunsinane Hill at the corner of the road just south of Collace. We were soon getting warm as we headed up the steep grassy path, passing some trees before the hill fort of Dunsinane came into sight. The sun was shining brightly as we explored the extensive earthworks, though there was plenty of cloud elsewhere. The extensive views from the top made it clear that this would have been a fine defensive position. 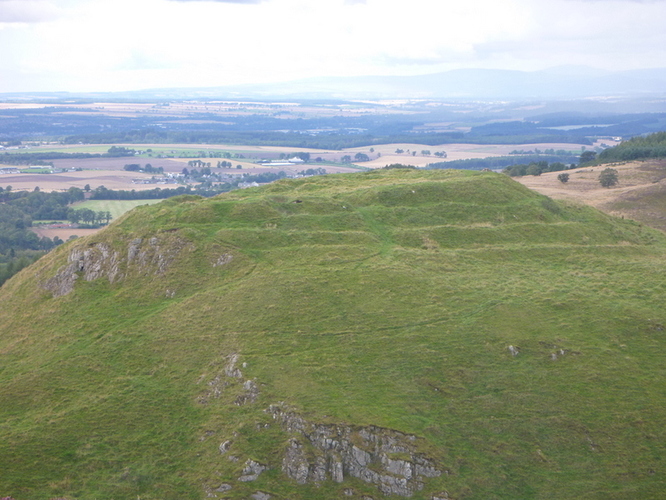 We needed to head off the hill slightly north of east, but it was too steep in that direction, so we headed down southish and picked up a path which angled down the hill towards the col between Dunsinane and Black Hill. A well defined but narrow path wound its way up through the heather on Black Hill, and there were fine views back to Dunsinane showing the lines of the ditches and banks. Passing the summit of Black Hill we now had sight of our SOTA target – King’s Seat. Dropping down to another col with a tumbledown wall the path headed off north, and we were faced with a heather bash following the ridge line. It was hard work crossing the heather, not helped by a heavy shower passing over when we surrounded by knee-deep heather. Waterproof coats on we continued, dropping down to another col where we picked up a faint path heading up and slightly round the hill. A path was better than no path, but we realised that it wasn’t ascending fast enough, and once we assessed that the trig point was well to our left we hacked over the rough ground, and before long the bright white trig point appeared. 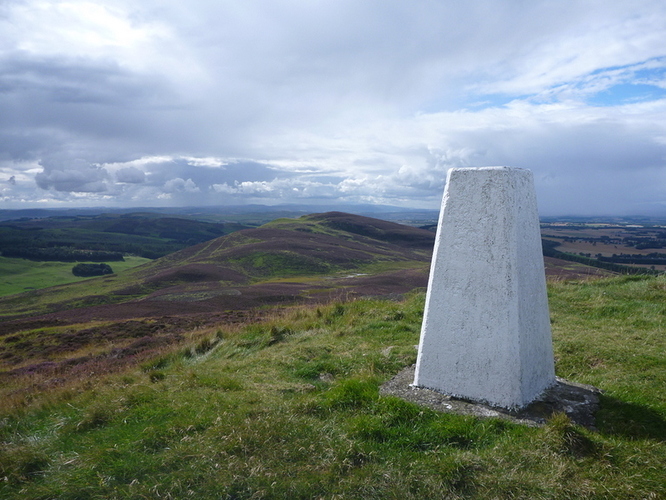 The sun was now shining brightly again, though we could seeheavy rain to all 4 points of the compass! Any ideas of using the trig point to support the VHF antenna were soon dashed when it became clear that both it and the nearby cairn were infested with a swarm of flying ants. Thankfully moving just a few yards to the north was enough to be clear of them. On the ascent we had been listening to Jack GM4COX talking to Walker MM/VA6MCB/P on the Cobbler, though Walker was rather weak. We started off with the S2S with Walker and also worked Jack. Martyn then set up on 5 MHz, while Caroline set up the proper VHF antenna. She only managed one more contact, so after Martyn had qualified the hill with a run of 8 5MHz contacts, Caroline moved to 7MHz where she got 17 contacts. Reverting to 2mFM while Martyn tried 14MHz, Caroline picked up Ken and Christine to qualify the hill on 2mFM as well. Martyn got 12 contacts on 14MHz including a Hungarian S2S also grabbed by Caroline. We managed to do the whole activation and have lunch without being rained on again – in fact it was a very pleasant activation, with slightly better radio conditions.

We were doing a circular walk, and descended roughly WNW, aiming at a triangular wood and the end of a track which would take us to the road. We found a path that started in the right direction, but then started heading too far west. We hacked over rough ground, but as we descended into thicker shrubbery, and we spent some time trying to find a way through, but we finally spotted the gate to the track and just had a boggy area to negotiate to reach it. The rest of the route was then easy – down the track to a road, left on the road, then left again to go through Collace to the car. Despite still seeing distant rain, we were bathed in sufficient sun that we needed to stop to remove excess clothing layers.

We drove down to the A93 to head east through the outskirts of Dundee to take the minor road leading to Hillside of Preiston. As we hit the Dundee bypass we also hit both heavy rain and heavy traffic. This wasn’t looking good for a second activation. We headed through some back roads to join the road north, and before long we were out of the rain. By the time we were turning round at the end of the public road and parking tight into the fence the weather was looking a lot better, though still cloudy with rain over Dundee only a few miles south. We walked up the road to the transmitter installation on the summit – initially heading straight towards the antennas and then winding round the hill to approach the summit from behind. The highest point and trig point were between two antenna complexes. The hole in the trig point was too small to support the VHF antenna, so Caroline strapped the antenna to the trig point while Martyn set up HF just below the small summit mound. Conditions seem to have worsened and Martyn struggled to 4 contacts to qualify on 5MHz, while Caroline again got stuck on 3 on VHF. Moving to 7MHz Caroline had a better run of 22 contacts over a wide area – England, Spain, Italy, Poland France, Germany and Belgium. Wanting some of the DX action Martyn tried 14MHz but only managed one Italian. In desperation and because we had enough time, we tried 80m for the first time this holiday – 2 contacts, including Mick M0MDA who had failed to make the contact on 5MHz. 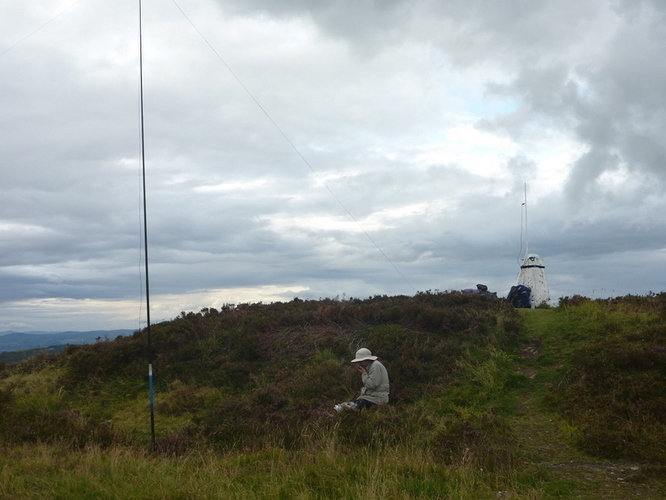 The light was beginning to fade as we descended. As we walked on the edge of the straight road avoiding the cattle we spotted something in the grass just ahead. We got close enough to work out that it was a Leveret – a moderate size but clearly not yet an adult Brown Hare. We were so busy watching it we forgot about the cameras until it ambled off! A wildlife treat to end the day.