The forecast wasn’t good, with low cloud and some rain forecast coming from the south, so heading north for a relatively small hill seemed prudent. We also wanted a less strenuous day than yesterday.

Our target was GM/NS-105 Cnoc Ceislein, and we headed to the small car park at NH627715 on the minor road north of Alness. Surprisingly for a dull weekday it was almost full, but we squeezed into a corner. It later became clear that this was a favourite location for local dog walkers and joggers. A good “Millennium” path left the car park heading for Cnoc Fyrish, but we didn’t want to go via Cnoc Fyrish and it soon became clear that quite a lot of the tracks shown on the map did not exist. We came to a track crossing where the main path went straight on downhill. Here we turned right onto a forestry track which took us round the southern flank of Cnoc Duchaire, and at the western end of it took another forestry track bending round to the SW. We had hoped to take a forestry track heading WSW over Cnoc Gaoithe, but there was no sign of it on the ground so we took the longer track that looped north and then back south. As this track left the forestry light rain started, so we had to cover up us and rucksacks. As we curved round we got some glimpses of the flank of Cnoc Ceislein, but the top was in the clouds – though the lower Cnoc Fyrish was still visible. We followed good tracks which headed towards the eastern side of Cnoc Ceislein. Where the path bent right (north) we struck off into the deep heathery vegetation to ascend up the spur. It was quite hard work, but as we climbed we were surprised to find a narrow path heading towards the summit. That made going easier, and we headed up the spur and round to the summit.

The summit was rounded, damp and boggy with some cotton grass. As well as the trig point there was also a strange square concrete block with a hollow metal pole sticking out of it. Caroline tested the inside of the hollow metal pole as an antenna support, but it was clearly longer then the 1m plastic pole, so she decided not to risk losing the pole in it, and instead lashed the antenna pole to the outside. The concrete block made a convenient radio support and seat for VHF operation, while Martyn set up HF nearby – plenty of space. Martyn drew a complete blank on 5MHz, while Caroline had the hill qualified on VHF in 10 minutes, getting 5 contacts in all, including one in Stornoway. Martyn resorted to 7MHz, which qualified the hill with 10 contacts, after which Caroline tried 14MHz, which yielded 9 contacts including 2 S2Ses with HB9BIN and S57MS which Martyn also grabbed. The cloud covering the hill when we arrived lifted briefly during the activation to give glimpse of the landscape, but had returned by the time we packed up. 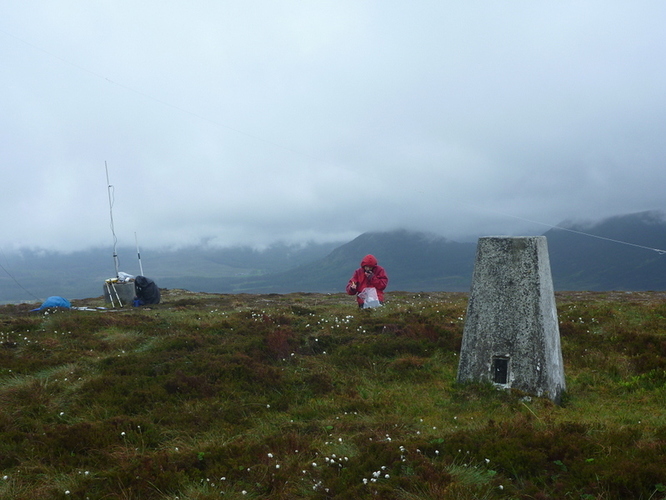 We followed the narrow path through the heather we had found on the way up which led to a the SW corner of an excavated rectangular area around NH596707, we headed north through this area to the NE corner which led to the track we had left on the ascent, but a little further north. Even if we had known the path was there I think it would have been difficult to find! Despite the poor visibility we decided to go over Cnoc Fyrish on the return, and thankfully the paths we wanted were approximately where shown on the map. I’m sure there would be good views on a clear day, but this definitely wasn’t. The strange folly monument (evidently an 18th Century job creation scheme) eventually appeared through the fog. We took photos, and were surprised that we weren’t the only ones visiting it in such poor conditions. We then took the main path back down to the car park, meeting a number of dog walkers and joggers along the way. 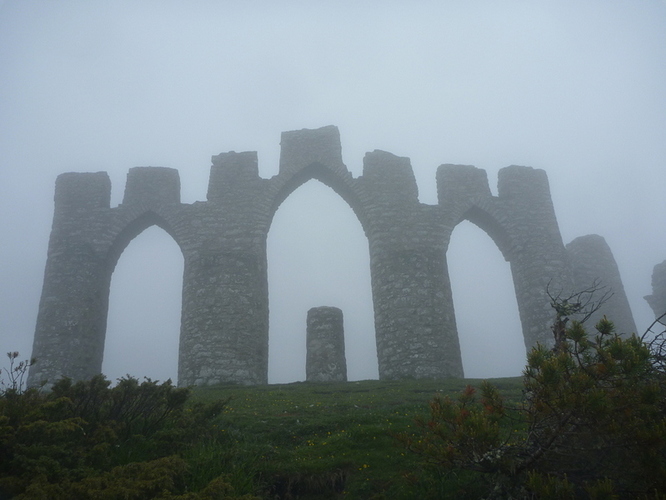