After the long day and late return the previous day we were late to get up and wanted a less strenuous day. The weather was also less cooperative with cloud and intermittent rain, which was due to clear by about lunchtime. We also needed to top up our food supplies, so our first stop was the Co-op in Brechin, where we got the shopping in without getting wet.

Our intention was to head for the 2 point Kerloch, approaching it from the north. We drove through the narrow arch in the middle of the pretty village of Fettercairn, but a couple of miles up the B974 we came to an unexpected Road Closed sign. Inspection of the map revealed that the alternative was a long way round: we would have to go all the way to Stonehaven, and then all the same way back afterwards. We needed a plan B, and Strathfinella Hill was the closest to us. Caroline had researched two routes up, but the closed road made the eastern approach the easiest to get to. We drove to Auchenblae and parked in the car park by the recreation ground next to the cemetery at NO723789. Unfortunately, the rain which we hoped should have passed had returned with a vengeance. It had just turned noon, so although it was a bit early for lunch we retrieved it from the rucksacks and ate it in the car.

By the time we had eaten lunch the rain had stopped so were able to set off in the dry. We turned left out of the car park and walked up the road to the track at NO721792 which we took to get to the gate at the edge of the forest. Through the gate and were into negotiating the maze of paths: past a felled section before entering the trees, sharp left a wider forest track for about 400m, then right along a pleasant narrow path up through trees, levelling out as it crossed another track, narrowing and becoming steeper to climbed up towards the summit of Black Hill, now under bright sun. There was a multitude of fungi under the trees. The path emerged onto a slightly wider path running along the ridge of Black Hill. Passing its summit, dropping slightly and then gently climbing along a pleasant wooded path, we turned left onto a wider track by a felled area which gently climbed to an almost imperceptible high point on the track, from where a ride headed right towards the true summit.

We knew there was a trig point, but it wasn’t immediately obvious as we walked down the ride, and it took some wandering back and forth before Martyn spotted it hiding in the trees to the west of the ride. The trig point did have a hole in the top, and Caroline used it to support the VHF antenna, though this turned out to be a futile exercise: she hadn’t really expected to get many contacts from a low summit in the middle of trees, but 0 contacts was still a disappointment. There was a small clearing a little further down the ride from the trig point, where Martyn could just about fit the HF dipole. He started on 60m and found it hard going, so by the time he had 6 contacts Caroline was hovering hoping to take over HF. 40m was also difficult, but Caroline managed to get the necessary 4 contacts, after which it went quiet. Martyn then noted a spot for John G4YSS operating on 80m as GT0OOO/p on Mull Hill. With the links all back in the dipole wasn’t matching that well on 80m: perhaps because of a combination of the ends being close to the ground, and the dipole being cut for a lower frequency than John was using, but we tried for the S2S, and John heard us despite there being other callers. Having worked John, we decided to find our own frequency where we had a better match: Caroline’s 5W didn’t attract as many callers as John’s higher power but Caroline got another 5 contacts to make her log a bit more respectable. 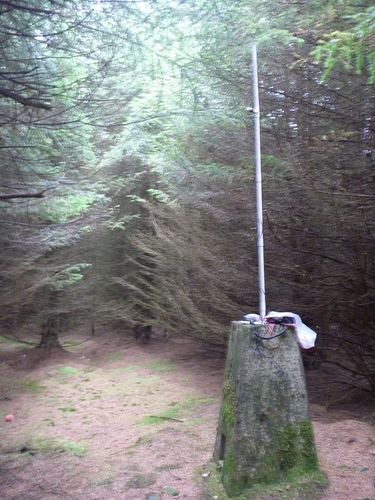 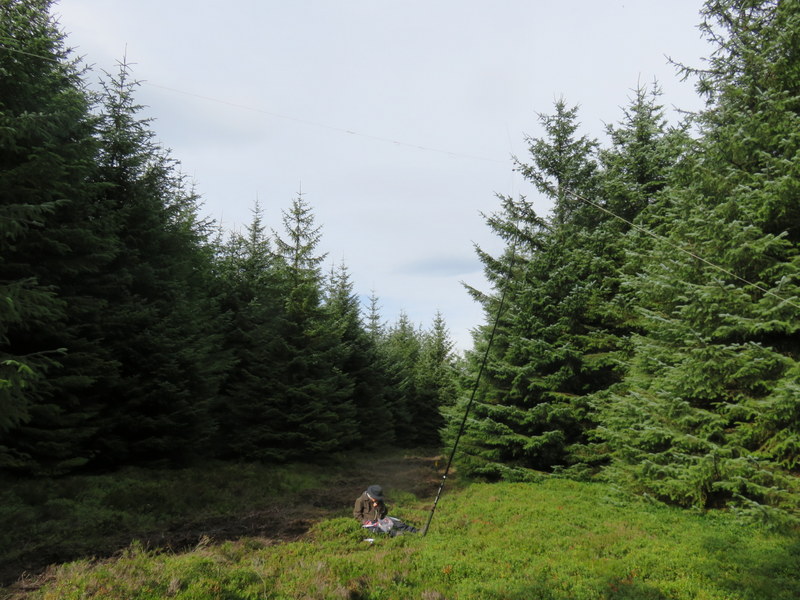 On our return we decided to vary our route taking a longer loop to regain the summit of Black Hill, then staying longer on the main ridge down before re-joining the outbound path back down to the wide forest track. We were about to turn left to retrace our steps when we noticed a faint path through the trees opposite: a reasonable direction. It meandered through the trees bringing us back to the felled area near the gate where we had entered the forest. As we walked back to the car park we repeatedly disturbed a flock of starlings making small murmurations as they moved between roosts. We had hoped we might also have time to activate Hill of Garvock, but it wasn’t to be. 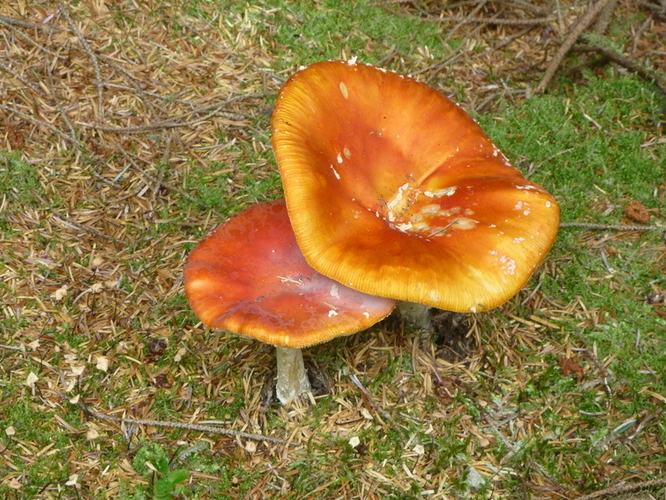 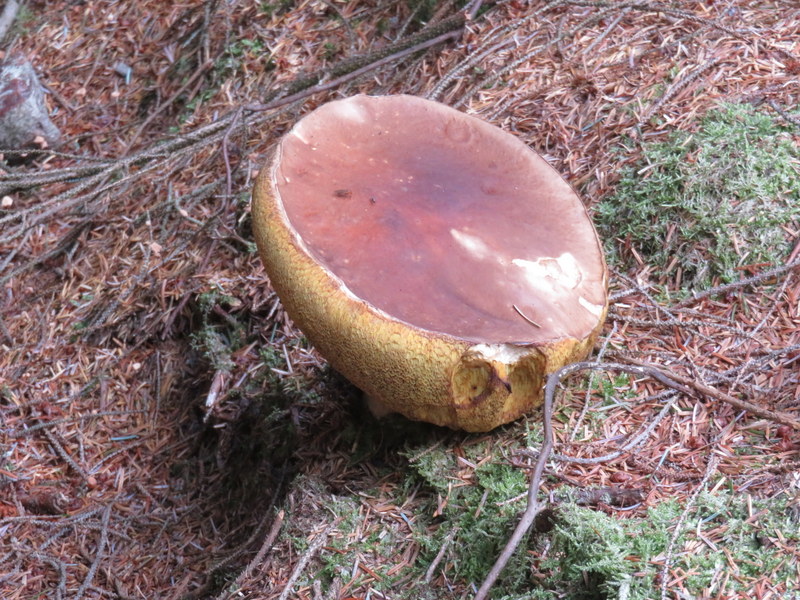 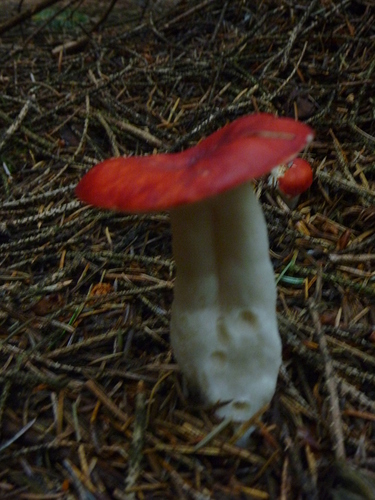 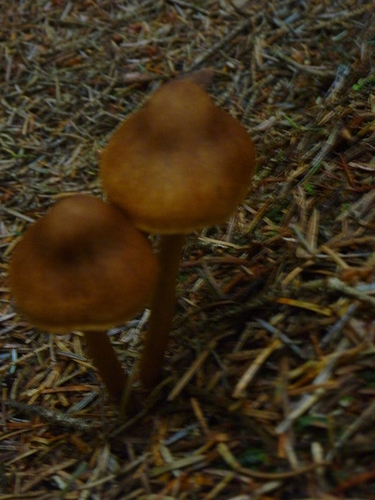 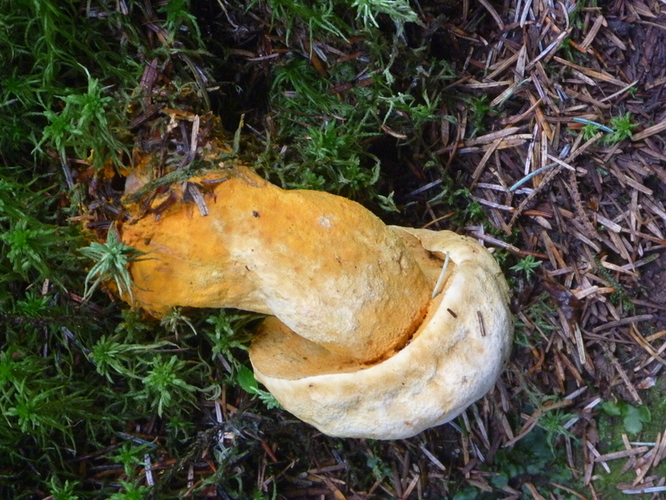 In case anyone else is interested in our route and for the benefit of the link on the summit information page here’s a graphic of our route:

Hi Caroline & Martyn,
A good read including useful route info. Thank you for the summit to summit QSO’s. I didn’t work that many from IOM so ES75 was very welcome.

80m dipoles don’t cover the whole band easily, especially with thin wire and low AGL. I have short sections at the ends for CW but I’m usually too lazy to use them.

Love the toadstools. Some mushrooms picked last week were sadly destroyed in the cooking. I’m no expert but there are quite a few edible fungi. Risky business though.

Looks like a well hidden trig point and what big trees for a SOTA summit! You were lucky with the weather. Keep up the good work.

“We drove through the narrow arch in the middle of the pretty village of Fettercairn.”

I thought that name was familiar. My son had a holiday cottage there last year and we managed to work Aberdeenshire to Scarborough on 2m-SSB from our respective high points.

I’m no expert but there are quite a few edible fungi.

All fungi are edible - ONCE