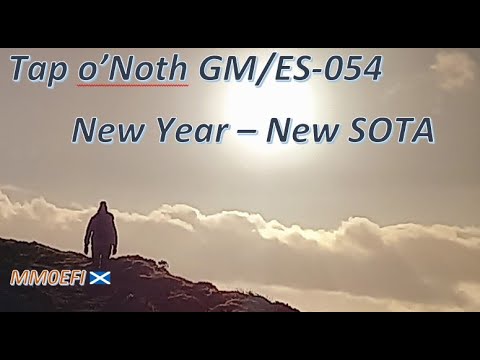 Tap o’Noth is a cracking wee hill, just a couple of miles west of Rhynie and about a 30 minute drive north of our QTH. Mo and I had been up here before, although she had no recollection of it. My recollection is that she borrowed my big North Face jacket to climb it in sub-zero blizzard conditions! I wonder why she can’t remember?

It’s a reasonably short 1.5 mile hike. We started around 1015 and it took us just an hour to plod up the steady grade which was a mix of constructed path, grassy track and rocky hill path. 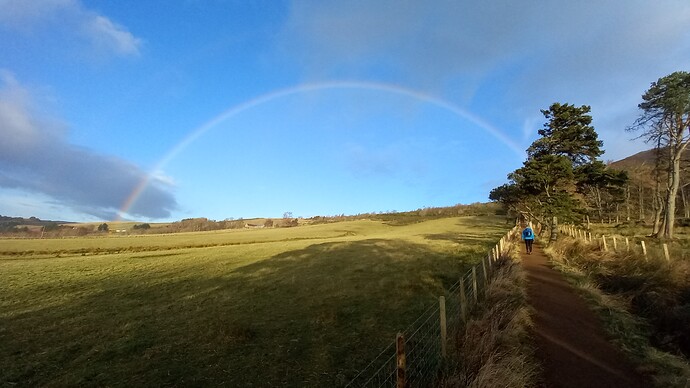 It doesn’t feel like you’re climbing the hill initially, as the track countours round to the left for a fair bit before picking up the hill path which zigs up and across the south face of the hill, before a short zag leads up to the unique summit area. 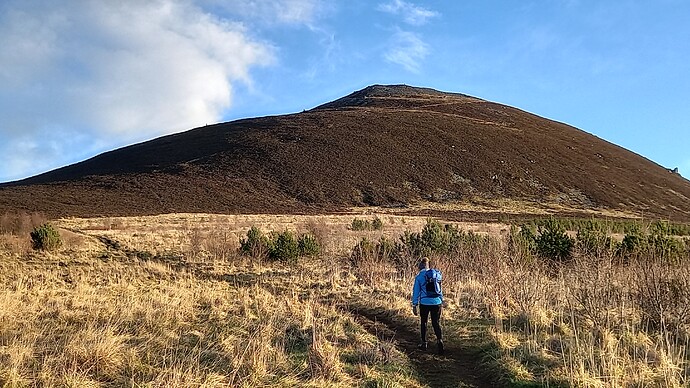 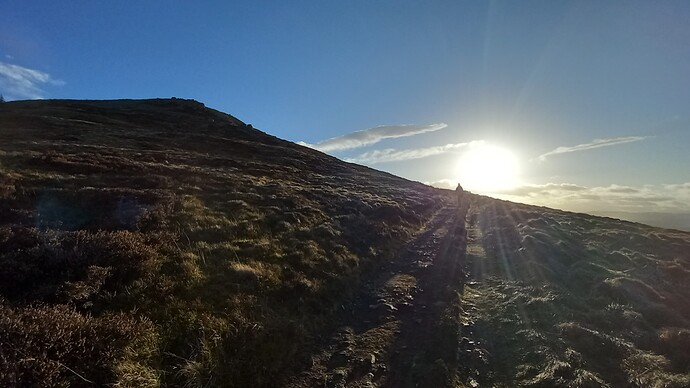 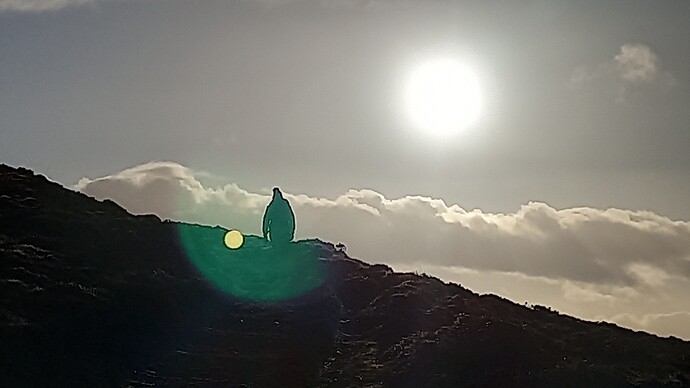 Why is it unique? Well the entire summit area is taken up by the remains of a hill fort. Estimates of its age are between 1000 and 3000 years old. In areas the rock has been vitrified (fused through heat). It means that the summit plateau is actually a slight depression, with the remains of the rocky fortifications all around. 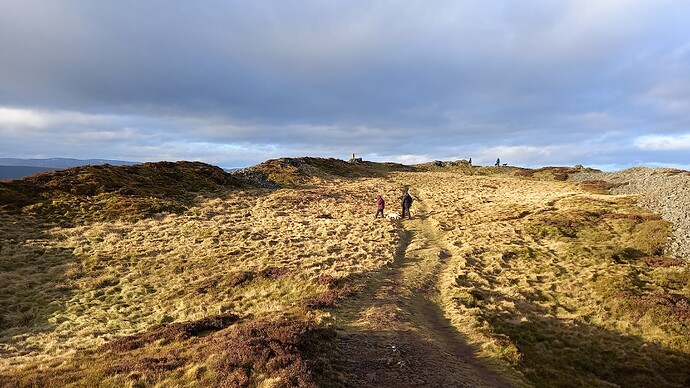 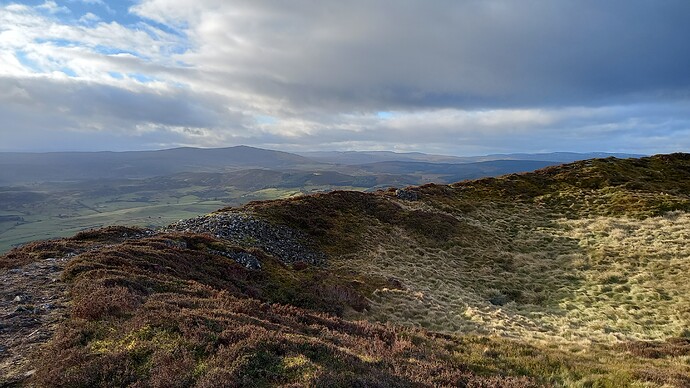 When it came to setting up station, I was a little concerned around going too low into the middle, but also keen to keep away from the summit trig point, given the popularity of this place. In the end we found a shelter at the extreme west end of the plateau. Mo wasted no time in getting the kettle on and I set up the W3EDP running west to east, easily guying the mast in the grassy depression. It was a fairly windy day, with a strengthening southerly, so the decision to use an end-fed was based on shelter and practicality rather than propagation. 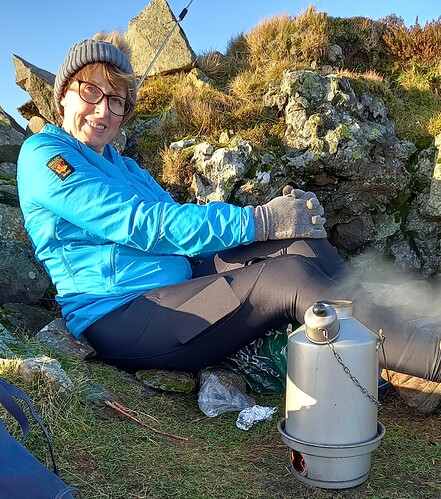 After tea and cake I got myself organised, plugged in the KX2 and somehow managed to find a spot on the 40m band.

The activation was straightforward, with many of the usual Chasers and lots of Happy New Year messages being passed back and forth. What amateur radio is all about! Highlight was a S2S with @LB4FHP/p who was on LA/RL-063

I used VK port-a-log, although I had a pad and paper in my pocket, however I’d forgotten my watch. I still haven’t worked out to log a Summit-2-summit with this in real-time. Must RTM.

I was conscious of dogs running around and when I looked up I couldn’t believe my eyes. There were half a dozen dogs running around and about 20 people. Too many for my liking, so I decided to pack up. One chap who spoke to me turned out to be an ex Navy radio operator. He asked if I was doing voice or morse. Another chap asked how far I’d got and I heard him explain to his family that I was on HF. 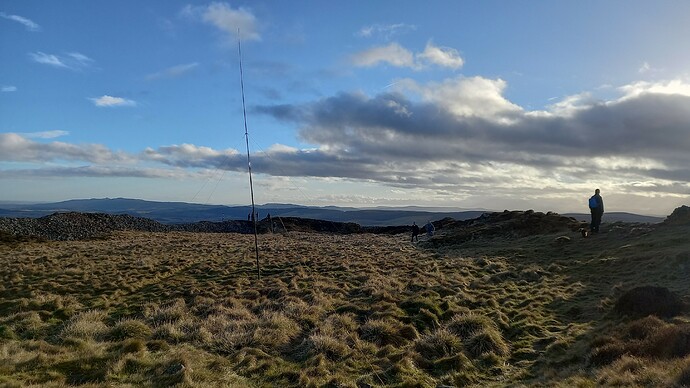 Another reason to pack up was that the wind was really picking up and Mo was starting to express her displeasure at any prospective band changes! 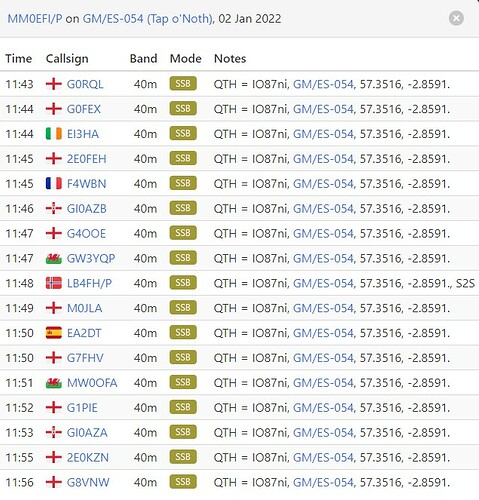 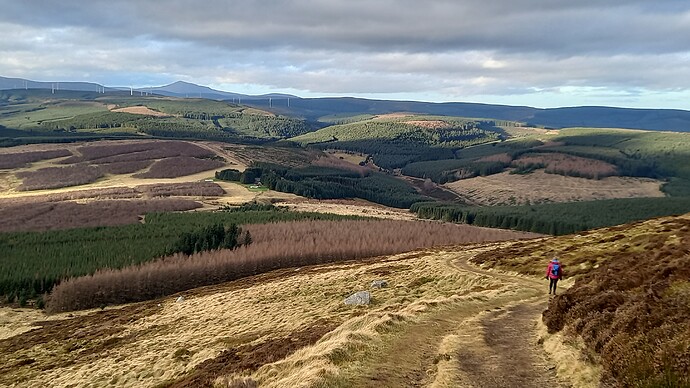 Descent was by the same route. We must have passed another twenty folk who were heading up (plus dogs). Should have known better really - New Year weekend and a nice(ish) day. Everyone wanting to walk off their steak pie! Lots of large groups too, so maybe families and friends playing it safe and meeting up outdoors.

Well that’s 2022 off to a start! Thanks Chasers. Great to hear you all on good form today.

Thank you for the report and the beautiful photos of the landscape.

Thanks for the qso and the FB report. It looks a good little hill and one that I will try and do next time I am visiting Aberdeenshire. My xyl is from there and we hope to visit family later in the year.

Thanks Fraser and Mo for your activation report with great photos.

Cheers to you both

With vk port-a-log to log an s2s there are two methods I use.

The first is by entering the summit details yourself. Start the same as for other contacts but you need to display the lower parts of the logging area (by moving the logging area up the screen) so you can find the other station’s SOTA reference fields where you can record the association, region and summit codes, each in their own field. You don’t need to enter the slash / or dash - in the code. Just tap in each field and enter the data for that field. Eg. G SP 013.

The second method can be used if the other station has been spotted on Sotawatch. First swipe to the left to display the latest SOTA spots and find the relevant spot for the other station; tap the spot for the station you are working and you’ll be returned to the logging page where all you need to enter is the signal reports. The callsign, frequency, mode and summit code are copied automatically from the spot.

Hope this is useful.

Thanks Andrew! Swiping left, right or down were actions I’d not even considered! Now it all makes sense.

It really is a cracking and versatile piece of software. My mistrust of the tech. lies with my phone and its screen in damp and wet conditions, as well as my frozen fingers in winter! However I will percivere when the conditions allow.

Lots of folk on Gummer’s How the other day and at one point two very lively dogs approached my prone position and one managed to jump clear over me and all my gear. Luckily apart from some mud splatters everything survived but with an IC-705 on a summit I’m bound to be paranoid!

Cheers for the report, Mark.

I think a phone screen would be too small for me. I use an android tablet, either a 7” Lenovo or an 8” Samsung. I can tap the onscreen keyboard without making too many mistakes on those.

Have a look at the manual when you get a chance. Swiping in the other direction lets you post a spot, either for yourself or for the station you just worked, or for someone else. It’s really a very nice piece of software.

Short video now at the top of the original post.

Thanks for the report Fraser, I like the video, especially when you include the reports from the chasers, as it’s nice to hear the familiar callsigns. Keep up the good work

Thanks Richie! Always tricky to balance, as some like to see the scenery more than the chat, but I always think it’s nice to hear what your SSB voice and modulation sound like on the other end of the radio from time to time!

Haha thanks Fraser, I know I do wonder what I sound like via HF. Managed to get a quick QSO with you late last year and you didn’t show it on your video! Gutted lol. To be fair I think you were in the 30’s with QSO’s, so I’ll let you off, as that would have been a long video to post.
So will this be the year of the Mountain Goat for you, as you can’t be far off now?
Hope to catch you on the air again soon.

Next time I shoot some footage, I’ll post an unedited QSO edition and then fans of my bad operating and pileup management can indulge. It will be Comedy Gold!

Or I’ll get my license revoked…

Haha yes can’t wait to see the B roll or bloopers! lol