There had been overnight rain, and when we first got up, but it had stopped by the time we had had breakfast and were ready to go out. We had two possible routes for Hill of Wirren: one from Bridge of Lethnot and one from near Stonyford and weren’t sure which one to do. We drove past the possible parking by the Bridge of Lethnot around NO537684, as it wasn’t obvious where to park, and we carried on up Glen Lethnot passing Stonyford and crossing two bridges and a cattle grid. Just past the cattle grid there was room to park a couple of cars opposite the public footpath to Glenesk and Ballater sign. We pulled in behind the car already there, only to be greeted by sudden heavy rain.

By the time we had booted up and assembled the rucksacks and antennas the rain had stopped, so we decided to risk not putting our waterproofs on, but left the rucksacks covered. We followed the public footpath track as it ascended very slowly as it headed gently west. We knew we needed to leave the right of way to take an unmapped track and started to worry when the track started to descend, but then spotted the right of way heading off to the left while the main track slowly bent right to start climbing up of the ridge of West Craig, passing a number of grouse butts. There was some light rain and we could see some heavy rain approaching so took refuge in a convenient grouse butt to get into full waterproofs. After all that the worst of the rain passed us by!

We came to a point where the main track went through a gate in the fence and looked to be heading away from the fence line we knew we wanted to stay close to the fence, so took a grassier track staying on the same side of the fence. Mistake! The track narrowed and eventually faded away leaving us with a heather bash to find our way to the track which had now reappeared the other side of the fence, which was easily climbed to pick up the track again. We followed the track almost to the summit, where we had to cross the fence again to make our way across peat hags on the flattish summit to get to the trig point. 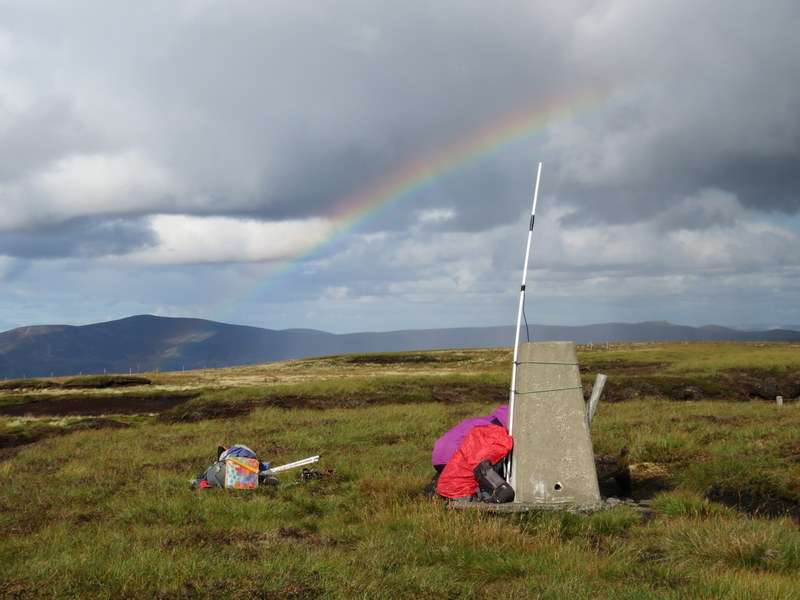 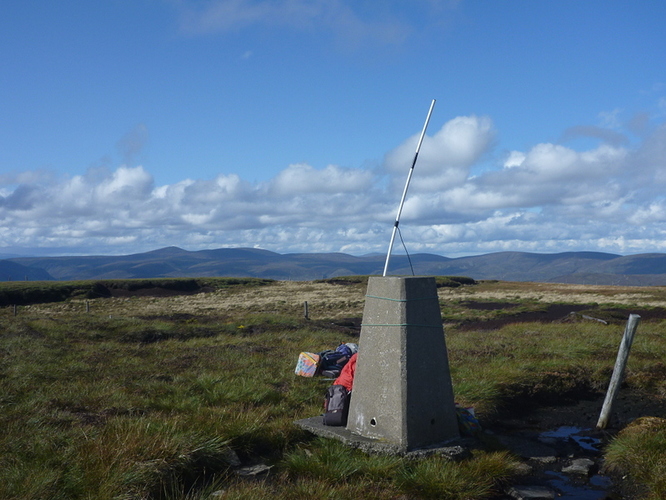 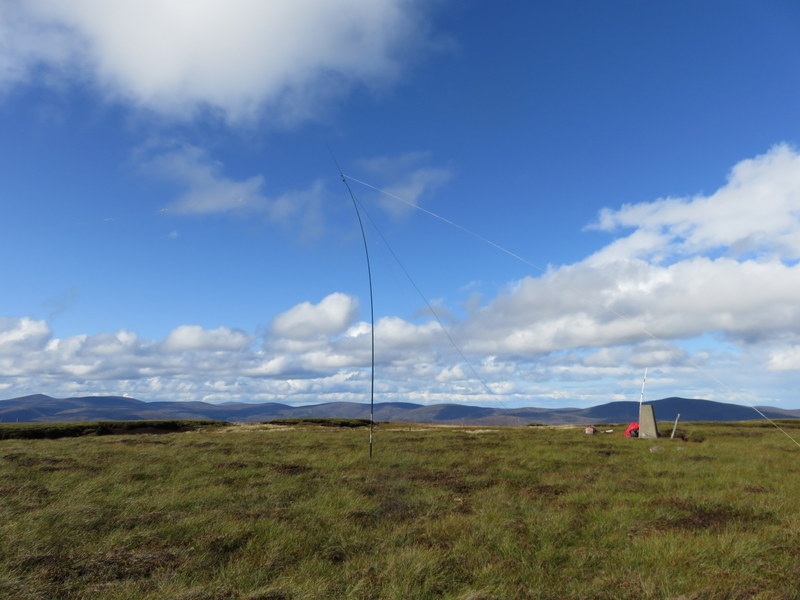 There was plenty of space to set up HF, taking care to avoid the boggiest areas. There were some wet areas by the trig point, but enough remaining of the concrete base for Caroline to be able to use it as VHF base. Caroline got 4 contacts on 2m FM while Martyn got 7 on 60m. Caroline then got 11 contacts on 40m with 2 S2S, but Martyn only got one of the S2Ses as the first contact was very difficult. Caroline’s return to 2m FM gleaned another 3 contacts, while Martyn was drawing a complete blank on 17m. There was rain about, producing a rainbow, but thankfully it didn’t fall on us. On the way down we followed the track all the way: it was slightly longer than outbound but easier going.

We didn’t have time to so another SOTA summit, but the cottage owner had recommended visiting the twin hill forts of White and Brown Caterthun, so we headed to the parking between them. White was the shorter walk and looked the more interesting: it was a nice change to be walking up a hill without SOTA rucksacks. There were substantial areas of stones surrounding the open central area of the fort and a marker on one side of the inner embankment, made more impressive by the nice evening light. 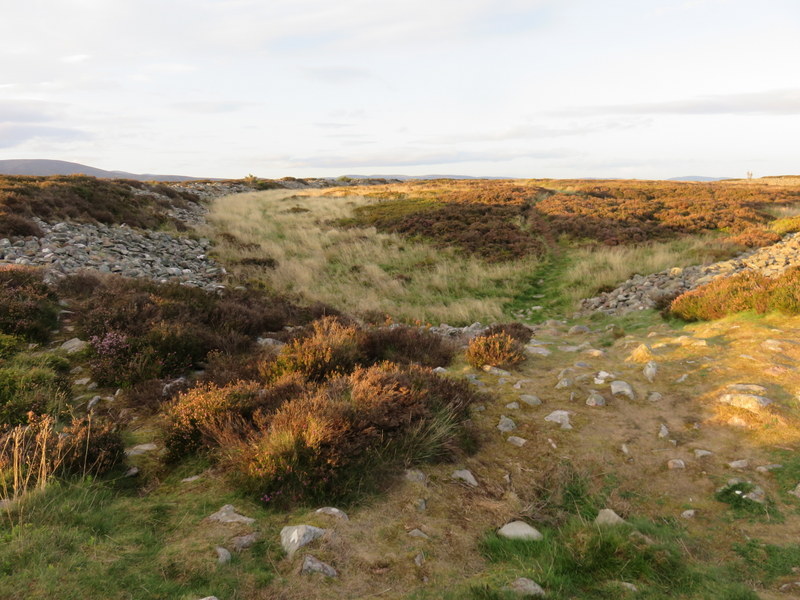 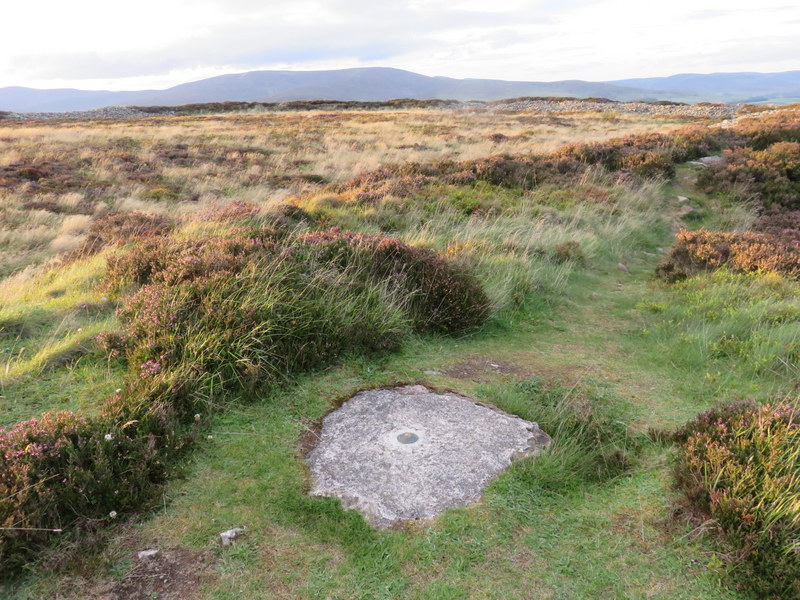 White caterthun is a hema summit. I didn’t see much of it when I was up there doing the 2m contest, due to pitch black and snow falling. Nic to see it in daylight. Martin 2m0kau

Good report Caroline,
Never done that one for SOTA but climbed it in Aug-1993 to look at aircraft remains. There are four on that hill from WW2. A Bristol Beaufort at NO516741 and Boeing B24 Lib at NO521735. Just wondering if you saw anything of them. Would love to go back.

Don’t like heather bashing much, reminds me of the Lyke Wake Walk if you go wrong but you put it right by climbing the fence.

Good report Caroline,
Never done that one for SOTA but climbed it in Aug-1993 to look at aircraft remains. There are four on that hill from WW2. A Bristol Beaufort at NO516741 and Boeing B24 Lib at NO521735. Just wondering if you saw anything of them. Would love to go back.

No we didn’t see anything of them: the track mostly stuck to the ridge line roughly following the fence over West Wirren: I think they would have been quite a way down the SW spur of the hill, and we were on the NW spur. It wasn’t a spectacular hill but there were good views down Glen Lethnot and Glen Esk.

We did see a couple of impressive cairns a way off the track which we didn’t investigate: I don’t know if they were markers for any wrecks. 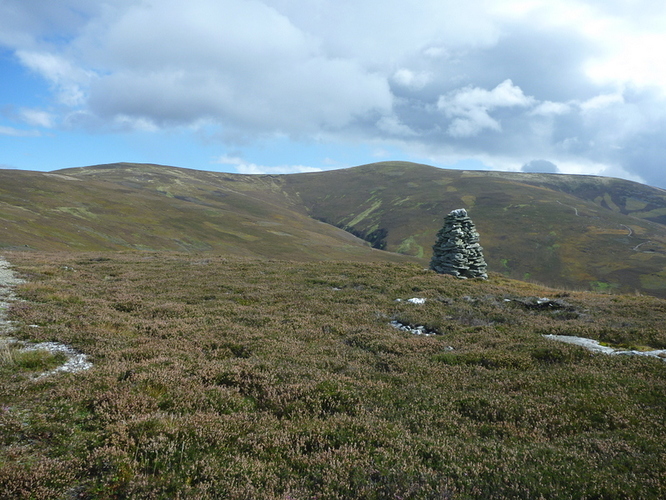 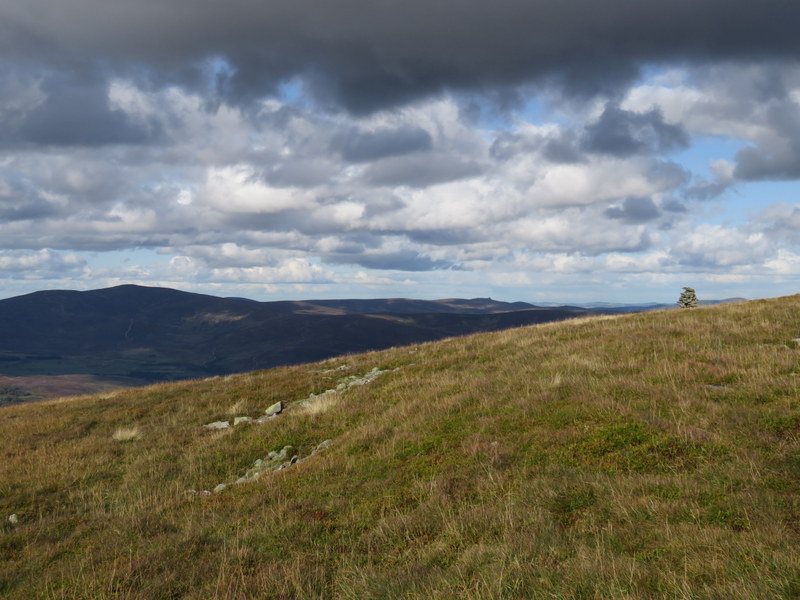