After overnight rain it was bright with some sun when we got up, but it had clouded over by the time we were ready to leave. We had tried phoning the contact number relating to access to Mount Battock but had only got an answerphone: since our phones didn’t have mobile coverage in the cottage we were using Wi-Fi calling via the cottage’s excellent Wi-Fi, so it wasn’t sensible to leave a message for a call back. We decided to risk it anyway.

We drove up Glen North Esk to the parking area by the Telephone box (still with a telephone) at Milden NO540789. We started off walking with just jackets on and got quite warm on the long walk in. We followed the road uphill past a restored mill, leaving the road for a track past Muir Cottage which led down to a crossing of the Burn of Turret. We found a footbridge over one branch of it, but a second footbridge was missing, so we had a careful ford, and it was only after we had ascended on the other side that we spotted that there was a better footbridge if we had carried on past the first bridge!

Over the other side we ascended Hill of Turret. It had been blowy from the start of the walk, and it got windier as we headed up Hill of Turret. We were beginning to get cold and noticed that heavy rain was falling behind us so we stopped to put on waterproofs. Thankfully the rain didn’t get to us but we needed the extra layers for warmth anyway. As we headed over Hill of Saughs the wind was making progress difficult, but we pushed on. Descending from the hill the track faded away and we had a slightly awkward section through boggy heather to eventually cross a fence from where a faint path headed up, becoming better defined as we approached the summit. On the way up saw birds of prey circling: we couldn’t get very good views, but they looked more like red kites than buzzards (tail flat/forged rather than rounded). We also saw a mountain here only a few feet away before it noticed us and sped off.

There was a good shelter at the summit with two sections, one of which even had wooden planks making a seat. It was very windy at the summit, though not as bad as on the ascent, so we needed all the shelter we could get, and even with the benefit of it Caroline ended up with 5 layers on. windy Martyn was having trouble with his FT-817 so grabbed a contingency 2m FM contact. Caroline’s initial 2m FM session just got her 4 contacts to qualify the hill, so she started on her lunch. A power cycle and little rest later and Martyn’s FT-817 was back in action getting him 10 contacts on 60m, after which Caroline took over HF for 11 40m contacts. Another swap and Caroline got 2 more on 2m FM and Martyn struggled to 4 on 20m, but with one transatlantic. A final swap put Caroline onto 80m, but she couldn’t raise any contacts. One other couple and dog visited the summit briefly while we were there (they had come from the East via Glen Dye) but we saw nobody else on the walk. We could see more rain coming but got packed up in the dry with the rain starting soon after we left the summit. 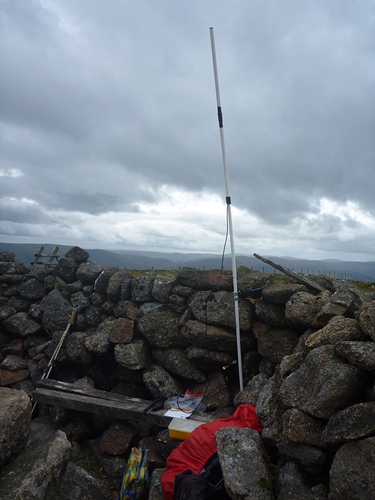 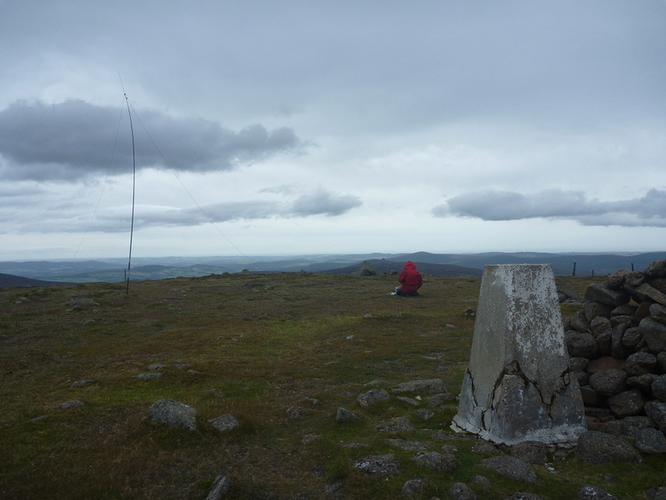 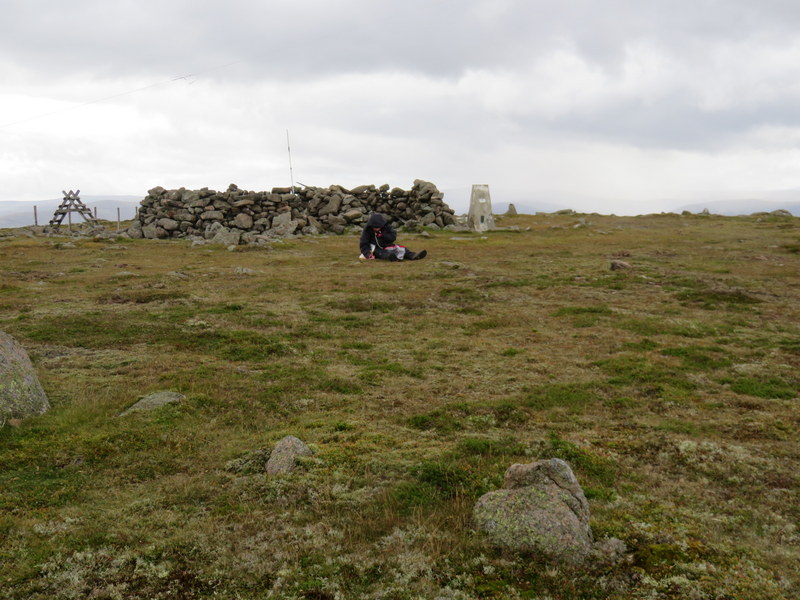 Since we were doing a circular walk we left the summit heading west following the fence towards Wester Carin but were upset to see about a dozen dead hares in a group near the fence, which looked to have been killed deliberately – just thrown on the ground – not nice. The descent route looked as though it should have had better views but the rain and low cloud obscured most of them, with occasional tantalising glimpses as clouds swirled away. From Wester Cairn we headed over Bennygray and Mount Een, catching sight of a live hare. By the time we were descending Mount Een towards an impressive row of turf topped stone grouse butts the rain had turned to intermittent drizzle and we found a convenient rock to sit on to eat some apples. Back at the car the trees sheltered us from the light drizzle, enabling us to pack up the car without getting too wet. 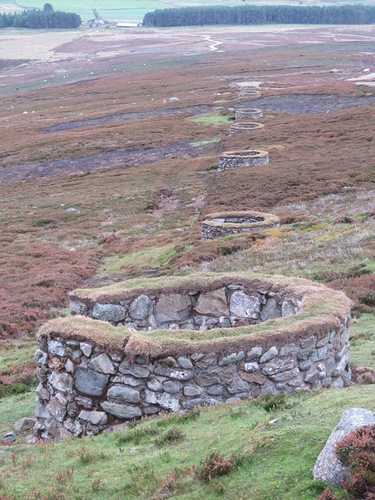 Was there a nearby young tree plantation? Hares are wonderful creatures, but can be extremely destructive in new tree plantations where landowners will cull them.

Was there a nearby young tree plantation? Hares are wonderful creatures, but can be extremely destructive in new tree plantations where landowners will cull them.

No trees anywhere near the summit, though it is clearly an area with a lot of grouse shooting and there is deer stalking in the area (not that we saw any deer, but we were avoiding the corries).

This estate is notorious for its attitude to “vermin” I found a red kite that had been shot (and reported it) and found numerous, heavy load, abandoned and used shotgun cartridges. Any keeper who can’t even be bothered to collect used cartridges to dispose of properly should not be employed and the attitude of the estate owner should be questioned.

This estate is notorious for its attitude to “vermin” I found a red kite that had been shot (and reported it) and found numerous, heavy load, abandoned and used shotgun cartridges. Any keeper who can’t even be bothered to collect used cartridges to dispose of properly should not be employed and the attitude of the estate owner should be questioned.

Now you mention it there were a large number of spent cartridges in and around the shelter, and some seen by the sides of the tracks. I don’t recall seeing significant numbers cartridges on any of the other walks.

Nice reading, thanks for sharing!