I’m thinking of heading up here on Sunday with Mo. It’s a short walk and has a track to the top.

Can anyone vouch for hill access here, given Andy’s report a few years back of new mining activity?

There already exists a Barytes mine between Farragon Hill and Meall Tairneachan. This is no longer economically viable and is now going to be closed with a new mine opening to the East of Farragon Hill. This new mine received approval in September 2016. The surface workings will only be 1 hectare with most underground but there is some 15km of access road to be built and approx. 16 heavy vehicle movements each way per day when the mine is operation. There is an estimated 50 years production in t…

Walk Report - Grab some snow whilst its there!

our_route.gpx Thought I would try to get some hills climbed in a gap in the wintery weather on the Sunday, but my main criteria were that...

This WalkHighlands report from 2018

Doh! WH is usually my first port of call for those things. My mistake was searching on here first!

I think there are only 2 routes published on there since the new mine was approved. Neither mentions issues. TBH I’d forgotten about the new mine and I have both those summits on a "do again on different bands " list for 2022.

I think we’ll leave Farragon Hill GM/CS-081 for another trip and just take in Meall Tairneachan GM/CS-080 this time. It all depends on how Mo is feeling and also how much tea I can carry!

If you do the route from the B846 up the mine track it’s quiet easy. It’s a good track as they have huge lorries moving over it. I did it with Mrs. FMF on a Sunday and there was no mine traffic. When it levels out you turn off to the summit. So most of it is on a hardcore track.

It’s about 3.75km on the track and about 300-500m over the rough grass. ISTR the initial slope on the track was enough to make my legs warm. But Mrs. FMF did it without too many issues and wasn’t going out walking very regularly.

Thanks. That’s the plan. I thought/hoped it would be a decent track. Leaving after work Saturday for a Land Rover sleepover in Dora the V8 Explorer…

The new Barytes mine is about 3km East from the summit of Farragon so well out of the way. I did Farragon as a single summit walk from Edradynate, longish walk but mostly good estate track.

The Meall Tairneachan Barytes mine is more or less closed I think, leaving a nice track almost to the summit as Andy describes. I paired that with Drumcroy Hill GM/CS-107 as a nice one for a windy winter day. Good shelter in the trees on Drumcroy and not too bad a walk up the edge of the wood from the west.

Dun Coillich GM/CS-100 is knee deep heather and not nice. Have fun!

I can recommend this one. I don’t recall it even having any slope! Walking through the quite spread out trees towards the top is great. They made a great wind break when I did it.

Dun Coillich GM/CS-100 is knee deep heather and not nice. Have fun

Thanks for the tip Gavin. That’s best avoided if I don’t want to end up in divorce court or hospital!

The Activation - a mini-adventure

Saturday 15th January 2022
I was working Saturday but nipped home at a decent time, collected Dora The V8 Explorer and then picked up Mo from a cocktail fuelled late lunch with her pals in Ballater.

Thankfully she survived the run over Glenshee and over to Loch Tummel. There was a high level of Geo last night, so I parked up on the Schiehallion road at 500m ASL, hoping for a glimpse of an aurora, but it wasn’t to be. 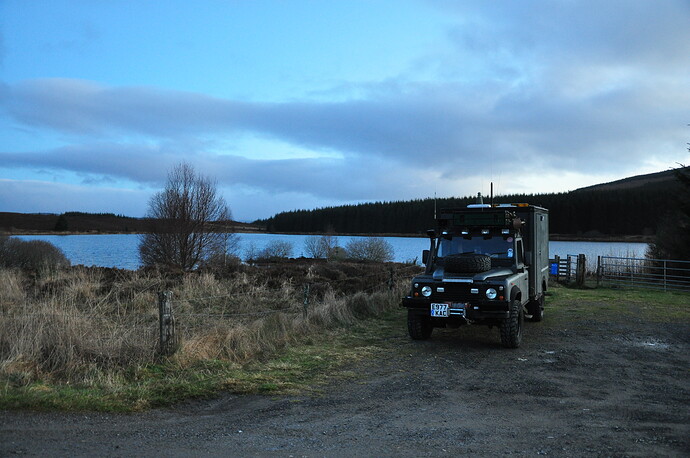 0900 and we’d moved round to the access point for GM/CS-080 Meall Tairmeaneach. There was a 4x4 parked in the sole car parking space opposite the mine entrance, so Dora made a new space. 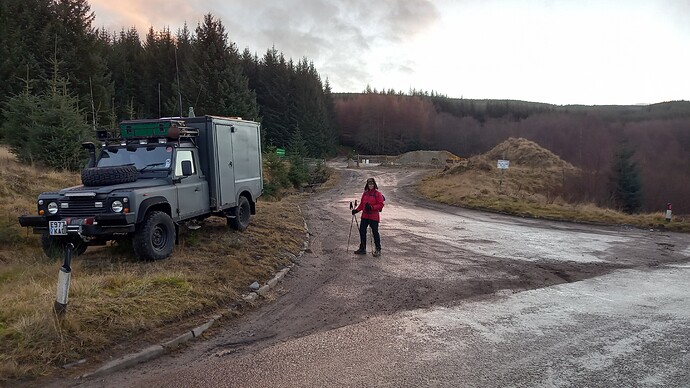 No sooner had we started walking up the track, the 4x4 moved up to the locked gate. The driver opened the gate and drove up the forest track.

The ascent was steep at first, through forest plantation, before opening out on to moor. Occasionally there were glimpses of the hills to the west. There was occasional evidence that this was an industrial site. Skips, debris and a couple of abandoned Swedish built snow-traks. 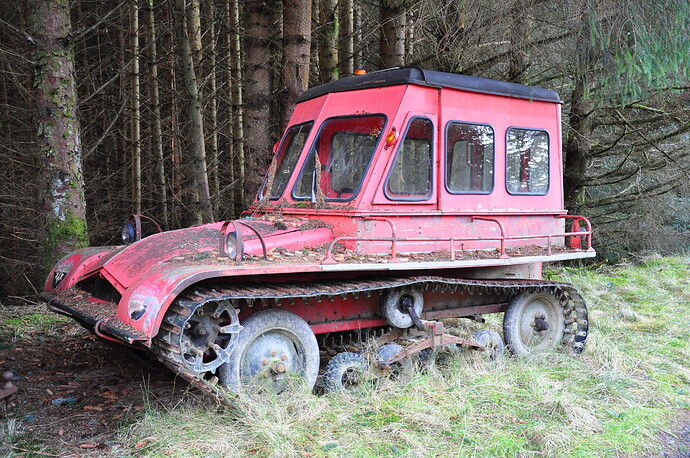 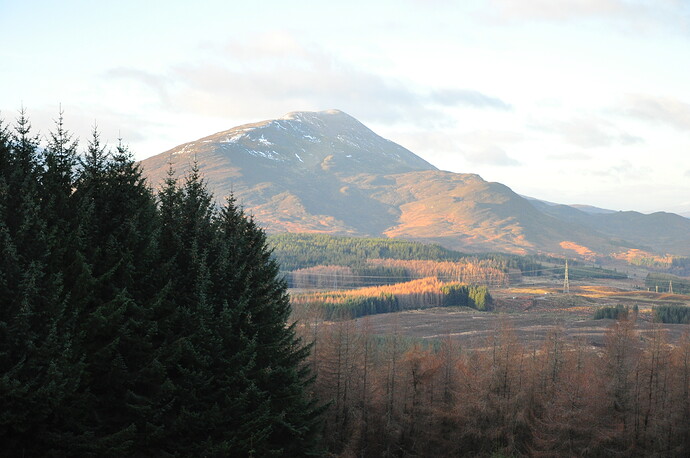 Once we cleared the trees, the views to the north end east opened up. The only obstacle was a cattle grid which had had the bars removed. Otherwise it was a dream track to walk on. The mystery 4x4 was parked at the cattle grid. 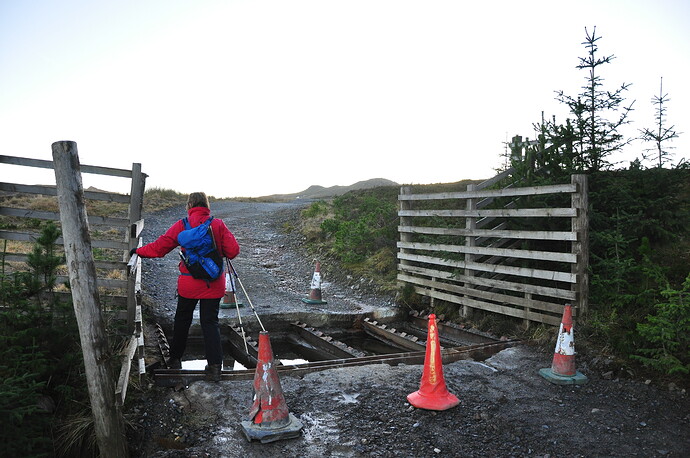 As @MM0FMF Andy mentioned, where an iron stake and a small cairn come into view at the top of the climb, it’s time to follow a faint trail across the grass and up to the summit. It was only a couple of hundred metres and we were on top. 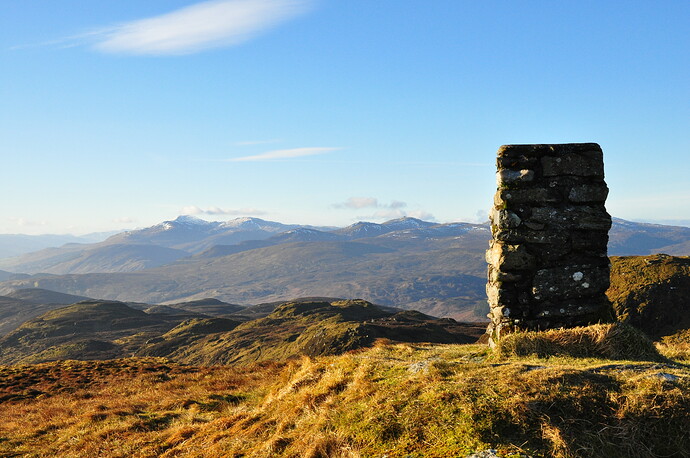 There’s a stone built trig. point, no shelter and it was blowing an icy 50kph NW wind. Thankfully the southern aspect of the hill falls away steeply in grassy terraces, so it was a simple of matter of dropping off the summit area until we we got some respite, although the wind continued to whip around.

The hill is amazingly well placed, with views to eastern, southern and western hills of Scotland. It was really evident too, how much of the early winter snow had been wiped out by the recent warm spell.

I’d Alerted an array of frequencies, but said I’d do 2m first and some more WX dependant. Once we’d had a cup of tea, I assembled the 100g 2m yagi, attached it to the Yaesu FT-3d and then realised I’d forgotten the hand mic. Never mind - at least I remembered to set the radio to record, so no paper logs needed today.

Over 20 minutes or so, I worked six stations, two in Edinburgh, one in Fife, one Dundee, one in Falkirk and @GM0GAV Gavin who was up on GM/SS-014 to the west of me. so, quite a spread over a 180 degree radius. Of course, nothing to the north, as I was down the southern slope. It was the usual 2m, with more relaxed and meaningful QSOs. 95km was ODX. 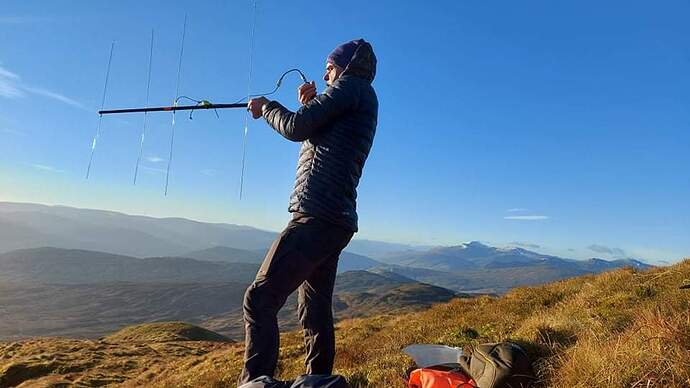 Activation and qualification achieved, I now had to choose, HF or pack up. Pack up won, due to the biting wind. I was delighted to have qualified the summit on 2m, which will sound perverse to some, but it’s highly unusual for me on my local hills.

We followed our route of ascent and were back down at Dora at 1220, the whole episode having lasted 3hrs 20mins. An hour of that was on top. Mainly due to cups of tea and admiring the views on this occassion.

On the way back we found the 4x4 owner. He was flying a drone, surveying ground re-generation from a clear fell area and also surveying the moorland. Peat moor holds an extraordinary amount of carbon and Forest Enterprise Scotland had asked for all of their land to be surveyed to see how much peat moor they had. He was going to be at it for a long time…

I’ve been carrying a “real” camera with me on every activation this year, it’s one of my goals for 2022. Here are some of the summit shots I captured. It’s a Nikon D90 BTW. 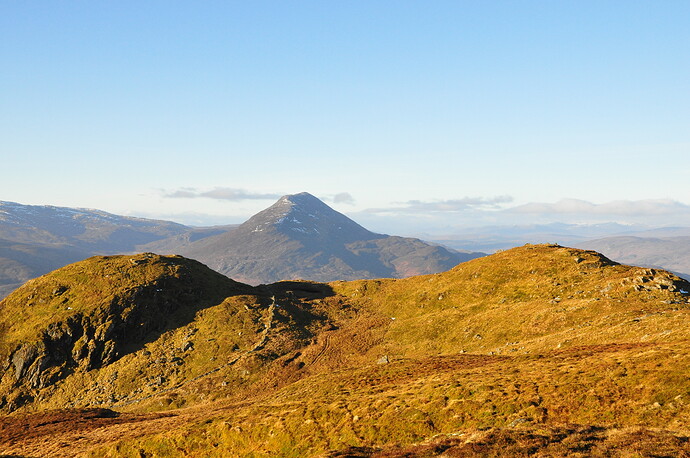 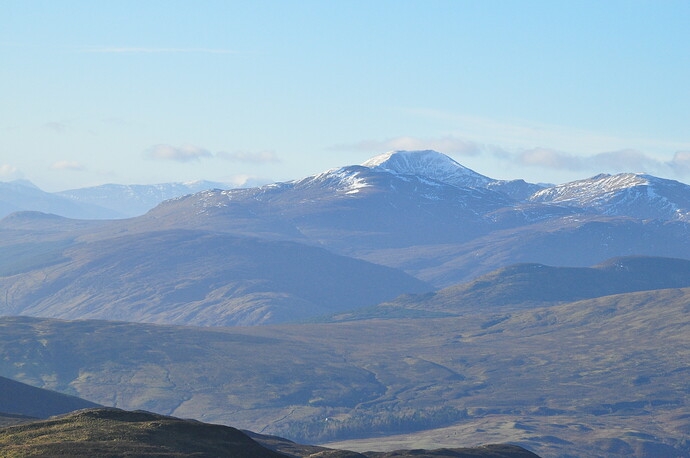 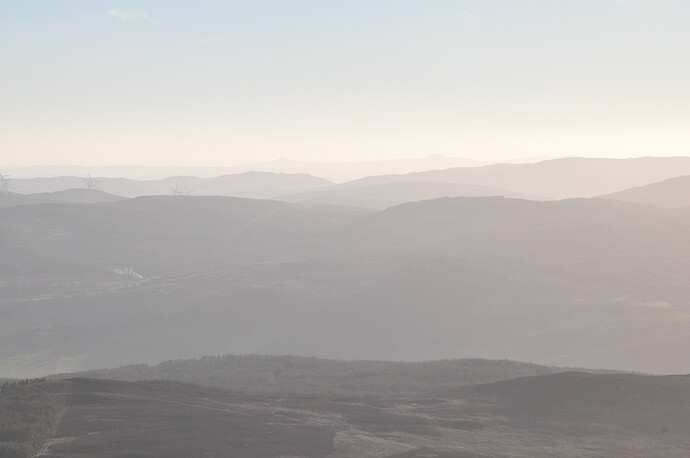 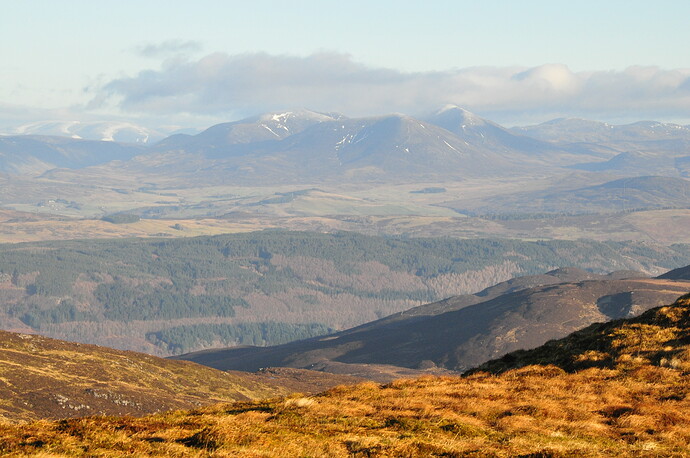 We stopped to eat our packed lunch on the way home, high up on the Moulin Moors Road (A924 between Pitlochry and Glenshee). Looking back, we could see that we’d had the best of the day, as the cloud had now lowered over many tops. 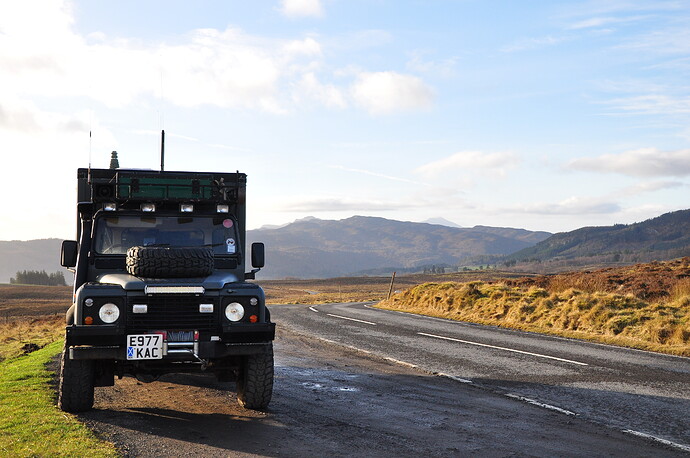 In summary, great to get a night away, have a nice wee hike on a hill that really was with in Mo’s current limits, with some lovely clear conditions and to work some new stations (plus Gavin S2S) on 2m!

I was sorry I missed you. I missed the spot when I had a look just after arriving at 1100Z. If I had turned the handy on you may well have still been on 2m. I was hoping for the complete as it was just across the way from me. 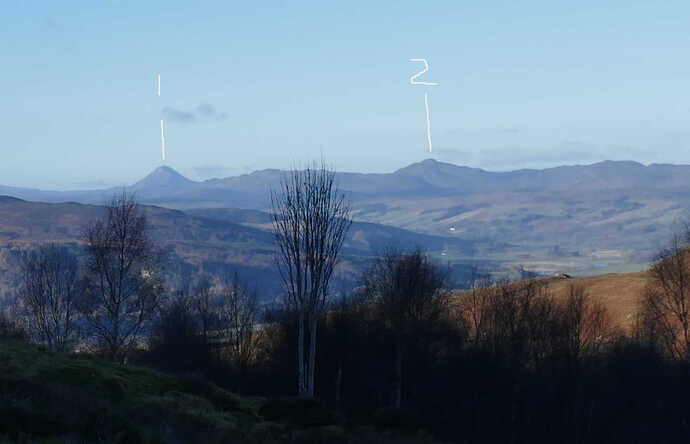 The Snow-trac is starting to look worse for wear. It was pretty beaten up when I was there in 2010. 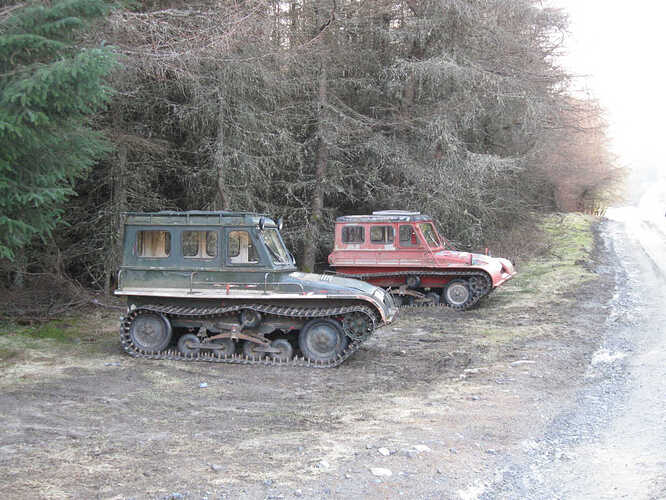 I bet the wind was stronger for you about 200m higher.

It’s a reasonably simple walk with the mine track but it’s not activated very often.

you may well have still been on 2m

I would have been. What hill were you on?

I turn mine on when I get up a bit. It’s gained me a few unplanned S2S’s on occassion, the best being when Mo and I were approaching the summit of GM/WS-023 Beinn a’Chlachair in September, only to net @GM3YTS @GM0GAV and @G4YSS all on Aonach Beag! That was the LD weekend.

Hi Fraser and Mo, thanks for another great report and photos, well done with the activation.

The depth and saturation of colours from the D90 are perceptible even at low resolutions. Nice pics…