The forecast was for a good day, with high cloud, and the possibility of some showers. This was our last chance to do any Munros this year, so we headed north up the A93 to the Ski Centre at Glen Shee, parking in the car park near the café and toilets. Workmen driving heavy plant were working on ski runs on the opposite side of the road and there were a few people around.

Starting at around 650m felt like a bit of a cheat. The chair lift wasn’t working and we wouldn’t have used it even if it had been – that would have been just too much of a cheat! Instead we headed up the gravel road, leaving it near a closed café to make our way up the rough slightly boggy ground running up the side of a ski tow. About half way up we spotted a mountain hare a little way ahead and then a second. A different day and a different species of hare. We carried on up to the ridge line where we rejoined a stony track to head south and up towards the Cairnwell – a non SOTA Munro. 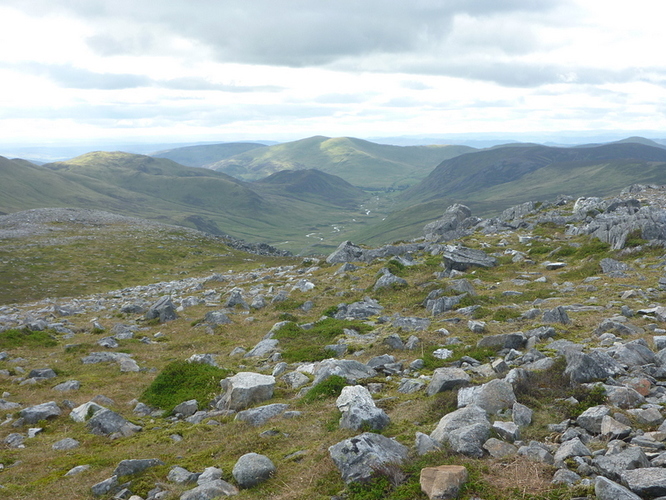 The weather was pleasant, some sunshine with broken clouds, though cooler than previous days with a noticeable chilly breeze. As we approached the Cairnwell we heard Robin GM7PKT on Meall a’Bhuiridh, but he was very weak and we failed to find a position where he was strong enough to work. The Cairnwell has a large antenna installation, and a little enclosed shelter whose roof was weighted down with a large number of stones – it can clearly blow there! There were excellent views, especially of the fine ridge walk ahead of us towards our main target of Carn a’ Gheoidh, and down Gleann Beag. We returned down the track following it down to a flatter area where we turned left onto a faint path heading through heather over a small hummock to follow the ridge round the corrie. Coming over the hummock we spotted a mountain hare in the dip beyond, and another, and another and another, suddenly there were lots of them! Their camouflage was working well – they were almost invisible until they moved. The path became better defined, and we followed the ridge round taking in the views, passing over Carn nan Sac and the Coolah. Around the Coolah Caroline again picked up signals from Robin GM7PKT, but as we started on the final ascent of Carn a’ Gheoidh we lost him again. After a pull up the gradient eased and within a few yards Robin’s signal had gone from unreadable to S9! He was now on Creise, and chatting, so we carried on to the summit cairn and shelter. 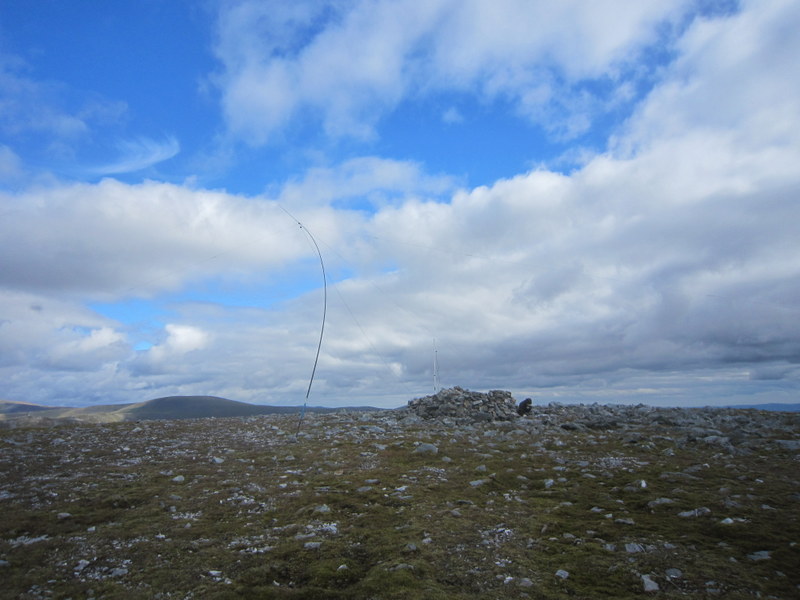 We hadn’t seen anyone else since we left the track near the ski centre, so we felt confident that we wouldn’t be in the way if we made our base in the shelter, and indeed we saw no one else on the summit, or indeed until we were back near the Ski Centre. We worked Robin S2S on the rucksack antenna and handheld and then set up our stations properly. Caroline was inside the shelter with the antenna propped up against it, with Martyn just outside – there was plenty of space for HF on the flattish top, though the stony ground made pegging it out a challenge. Caroline qualified the hill on 2m FM, Martyn on 5MHz. Caroline then had a reasonable run of 18 7MHz QSOs. We swapped around again for Martyn to try 14MHz – conditions better than the previous day with 15 contacts including one Canadian. With only one activation in the day we had time to try other bands, and 21MHz appeared to be lively, but we didn’t have a 15m antenna. However the 40m antenna matches reasonably well on the 3rd harmonic, so we tried that – only one contact – the same Canadian, but much stronger here than on 20m. 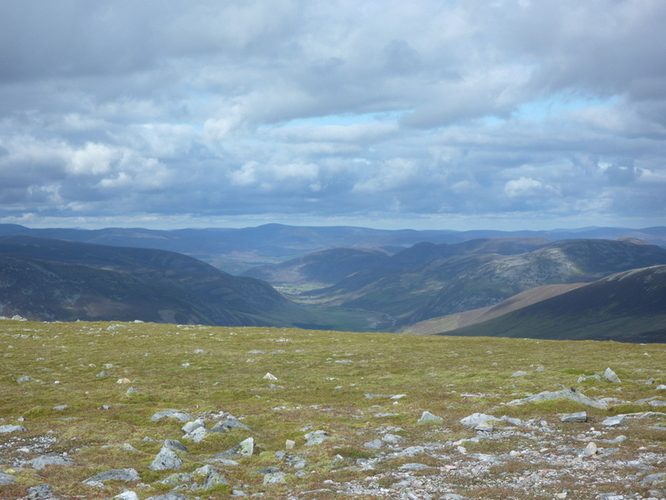 There was a chilly breeze at the top, so we packed up and moved on to warm up, retracing our steps along the ridge, seeing more hares, finally picking up one of the ski centre tracks between the Cairnwell and Carn Aosda. A quick calculation and we did have time to do the non-SOTA Munro of Carn Aosda. The scenery is scarred by the tracks associated with the ski centre, and Carn Aosda’s summit is mostly bare broken grey rocks. As we approached the summit there were even more hares, who seem to be able to magically blend into the grey rocks as well as the grassy heathery area. There was one who posed for a while silhouetted on the ridge – but not long enough for us to get the camera out! The summit gave fine views, especially to the north down Glen Clunie, and we sat by the cairn munching an apple. We returned to the car down one of the Ski Centre tracks. An excellent day with good views, no rain, lots of hares and better radio conditions than previous days. 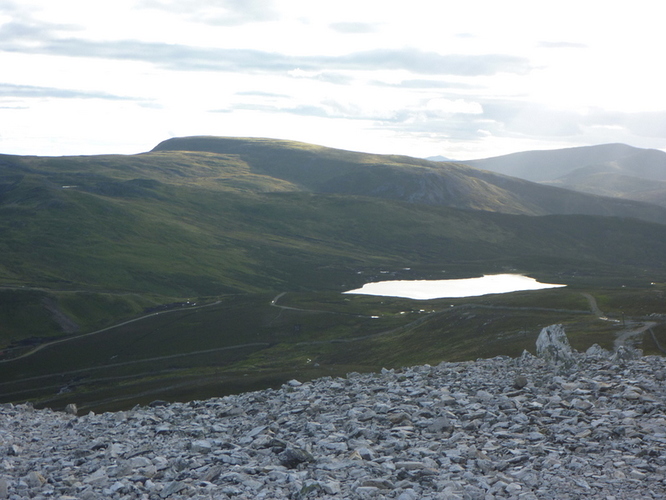