Friday 21st January 2022
I so badly wanted some 2m DX. Glas Maol was my choice, given it’s height and great take off to the south. Friday was the day, with calm conditions and high pressure. 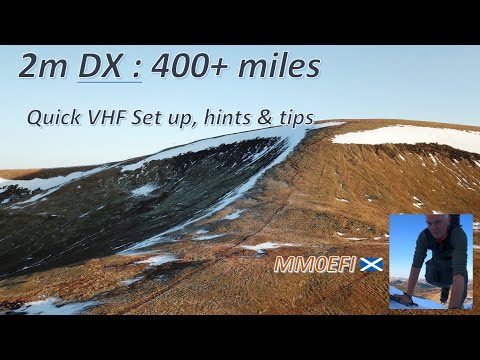 The upper slopes of Glas Maol steepen and a path zig zags up to the plateau. Little snow remains, however there was a nice rib of nevé at the edge of Glas Choire, so I donned the crampons, took out my axe and plodded up. Good fun, especially as it steepened at the headwall. 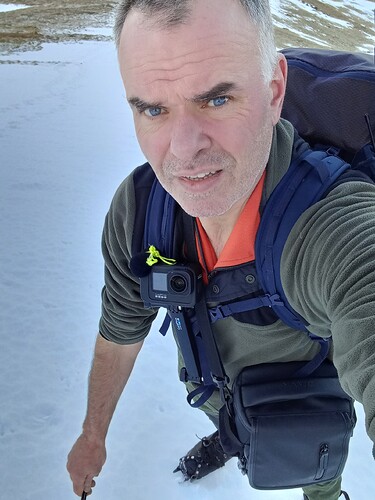 Soon after I was sat in 0°C temperatures, with a light breeze, in sunshine and on grass. Hardly any snow to be seen.

No wonder my pack felt heavy.

Thanks to the fine conditions and the short climb, I was prepared to spend a couple of hours getting some contacts. Although the VHF propogation forecast didn’t show any Tropo. this far north, I was still hopeful for a bit of a lift. 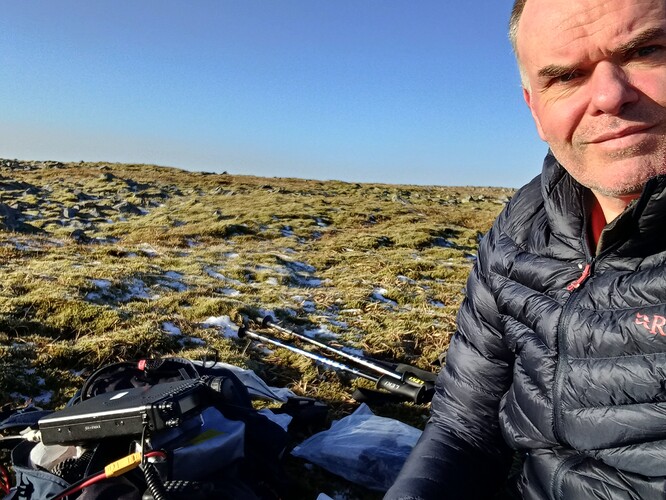 All I’ll say is I didn’t have time for FT-8. Sorry to anyone looking out for this.

Highlights were Don @G0RQL in North Devon, ODX at 416 miles and Richie @MW7RJO summit to summit to GW/NW-005. 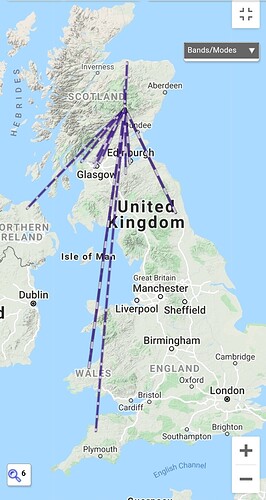 Richie had only taken a decent aerial with him because he’d read that I was going to be going for it on 2m! Good choice Sir.

After the activation I wandered over to the eastern side of the summit to peek over the wonderfully isolated Caenlochan Glen.

Standing on the summit of Glas Maol is like standing atop a massive space hopper. It’s very difficult to appreciate the surrounding, sometimes dramatic landscape. Popping the drone up revealed a lot more of the mountain. 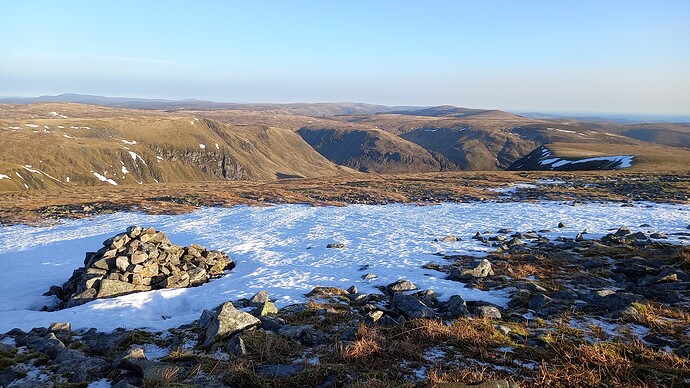 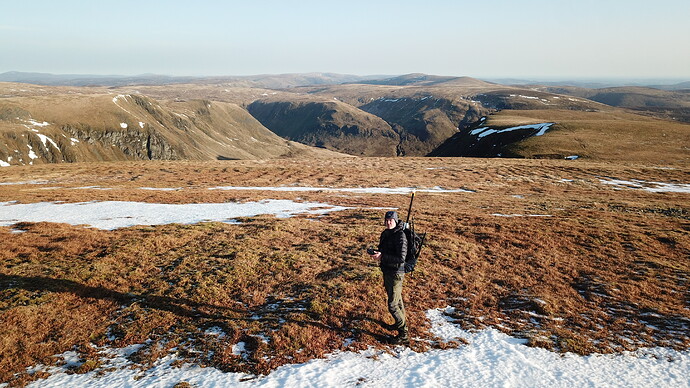 That done, I plodded down, incredibly happy with the way the day turned out.

For those that haven’t seen it, this is what I was doing the day before. A complete contrast.

Well I will say that I don’t think that my time on the hill this morning was as pleasant as Colwyn and Gavins. It started off OK and I was able to cycle the shorter route, the ones walkers would use, thanks to a firm and ice-free surface. [20220120_082818] The direct route Once on the hill however, the wind picked up dramatically and it was blowing a strong and icy NW at 40mph in to my face. [20220120_111229] Eventually I reached the summit only to find it was the wrong one - there are t…

Hello Fraser, thanks for your activation report a video, really enjoyed that. Your 4 element beam looks really interesting.

Can you tell me about the design, where did you get it from etc.

Can you tell me about the design

Thanks Geoff. It’s based on this.

Introduction One of my favourite hobbies is to trek and climb the Alps and do ham activity wherever I reach. During the warmer seasons, I often reach high summits: what better place for some VHF activity? So far I worked with a 4-elements 1m long...

Thanks for the nice report and video Fraser.

That brought back nice memories of my last visit to Glas Maol, one January nearly 40 years ago. A friend took me winter hill walking to teach me some winter mountain craft. There was a lot more snow around then! Once we had left the crowds behind on the ski slopes we found a nice steep slope to practise sliding down and stopping the fall with the ice axe. Also some step cutting on the way up. It was almost a complete white out that day but one highlight was walking within a few feet of a Ptarmigan in its winter white plumage. Its funny how mountain memories are often so clear.

A friend took me winter hill walking to teach me some winter mountain craft.

Yes, Glenshee is a great place for that. Steep slopes and you hopefully won’t kill yourself if you get it wrong.
Glenshee is scarred by the ski development, but it allows simple access to the hills and once the tows are out of sight, the hills are as good as anywhere.

Hi Fraser, another great report and video there. Good to get you ITL S2S at 270 miles!

It was a good motivation to get out with the yagi and try to get a QSO with you, knowing that you were out with the beam. I won’t say I was waiting in the cold for very long whist you were basking in the sun, or that there was ice forming on my antenna!

To be fair thought, it’s given me some motivation to keep taking it out and see how further I can get with the yagi on 2m.

Richie, It was great to hear you twice. It was really marginal the first time.

I’m thinking more 2m fun from the Southern Cairngorms tomorrow morning. If I can get the electric back on to charge my battery!

Oh no has the wind knocked the electric out over there? No SOTAing for me till I can come out of self isolation which will be on Monday and as luck will have it I have 3 days off work, so all being well I’ll have three days out with the Yagi to see what that will bring.

Haha yes sorry you had to hear from me twice, I didn’t realise my mistake, having the Yagi pointing in the opposite direction to you, till I was going QRT. Could hear you were still on freq so thought it would be worth coming back for a second go, which I think it was.

Oh no has the wind knocked the electric out over there?

Yup. Power off for 13 hours now. Fired up the genny, so back on line and saved the fridge/freezer. Battery charging, so will hopefully get up the hill tomorrow in the lull between storm Malik and Storm Corrie.

I thought these storm names were supposed to run in Alphabetical order?

This storm was not named by the Met Office.

Nightmare, but at least and it sounds and looks like you’re prepared, certainly living where you live, you’re probably used to it by now. I should really invest in a genny, have most of everything else in case of an Zombie apocalypse

Think this storm was named by the Danish, as their getting the brunt if it apparently?

Power off for 13 hours now

Hope you are sorted soon.

Power still off Gerald and the SSE website tells me it won’t be restored until midnight on 1st February, which will be a day longer than Storm Arwen.

Good job you weren’t up there yesterday.

I know, but I was up there today! 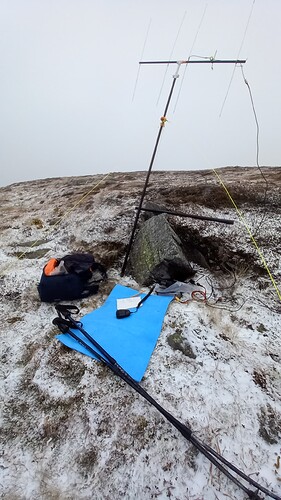 it won’t be restored until midnight on 1st February,

Sorry to hear that! We’ve always been susceptible to power outages in high winds in the UK, with our combination of overhead wires and a lot of trees. Not sure what the answer is in the long term with climate change causing more destructive events. Burying all the HV cables would be very expensive.

Seemingly in the future there won’t be a grid as such. We’ll all make our power locally. Can’t wait to for the install of my home fusion kit!

At the moment I have the genny feeding the house essentials, the bothy, we’ve got coal and log fires on and 60l of petrol. The lash up would give an electrician sleepless nights!