So we’re back in Belfast for another pre-Christmas visit to Marianne’s dad (Grandad Jimmy).

I used online mapping to suggest a postcode for the access road up to the summit, but once in the vicinity, I couldn’t find the correct turning.

Instead I parked in the Cairn Wood car park and attempted to walk to the summit using the forest trails. Without adequate mapping or preparation, I couldn’t find the route out of the woods and across to the summit either.

Nonetheless, it was an enjoyable walk, most of it accompanied by a Cumbrian man who has been living in GI since 1970, and his little dog.

So a failed expedition. I reported back to Jimmy M0HGY later, who showed me on the map the exact turning I needed, showed me a photo of it on Google Streetview, and programmed the coordinates into my satnav!

We had a great meal that night in Bootleggers, Belfast - highly recommended.

Determined to exorcise the previous day’s fail, I got up at 5am and had an early breakfast cereal and coffee. The storm was hitting hard and I set off driving across Belfast in torrential rain. Several areas of flash flooding needed to be carefully negotiated.

This time I found the road easily and was parking up just a few yards from the summit well before dawn. 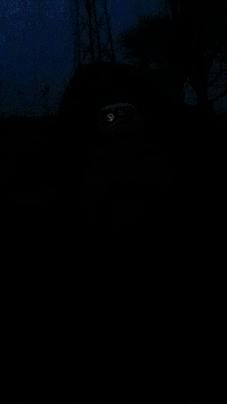 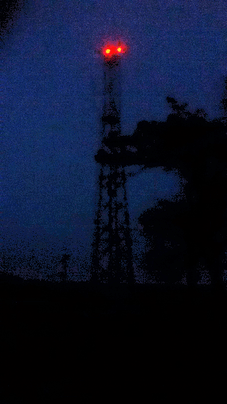 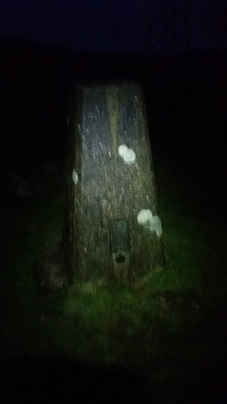 The rain actually eased off, very conveniently, for the period of my activating. I just used the handheld and gathered five QSOS on 2m FM.

No chance of a QSO on 2m FM for me with GI, although in the lift a few weeks ago on the 24 Oct Tropo VHF lift I heard an EI station at 57 working G4OOE/P who was also 59 on WB-003. Also with your early start being in bed doesn’t help either! Good to know that its possible to qualify on 2m FM from some Northern Irealnd summits should I need a quick or wet activation when I am there, hopefully next year.
The Cumbrian guy you met went to live there in the early years of the troubles, I imagine he finds it a lot more peaceful now. Lets hope it stays that way…
It looks like your tour playing for Joe Longthorne has now finished, you must have done some miles this year driving.

PS No gurning face this time… must have been too dark I guess.

Phil - the first photo is a selfie - but very dark. I’ll see what photoshop can do when I get home!

The tour with Joe continues apace. Bit of a gap just now, allowing the GI break - but flying to Benidorm for a Joe gig at weekend. Then back on the road in the UK. Theatre gigs booked up to the end of 2019. Which is great for my SOTA! 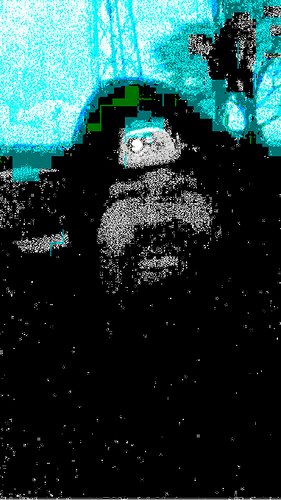 OK on the dark selfie and Simon’s captured ghostly image…

Wow! Benidorm - FAME - are you playing The Solana? Sounds like you have a great paid hobby to me!

It’s a full time job, not a hobby Phil - but I love it and it feels like I’m not working even though I’m doing much longer hours than when I was teaching! I think the venue in Benidorm is the Marina Hotel. We did Benidorm Palace last year and I had breakfast on the next table to Sherrie Hewson in the hotel one morning!

Yeah Kelly is a great bass player, and very marginally better looking than me.

I had breakfast on the next table to Sherrie Hewson in the hotel one morning!

LOL! I expect she will be telling all her friends that she had breakfast on the next table to Tom Read one morning.

I expect Sherrie would have been filming Benidorm - the TV programme. I liked her part when she played Reg Holdsworth’s (Ken Morley - a Chorley friend of my brothers) wife Maureen in Coronation Street, and she was recently in a reality TV programme as one of the ageing celeb tourists caravanning around Britain, I enjoyed watching that also, as they came to the area near to where I live.

We hope we see you on 20m before or after the gig Tom - single hop skip distance is perfect for 20m in the daytime for me! 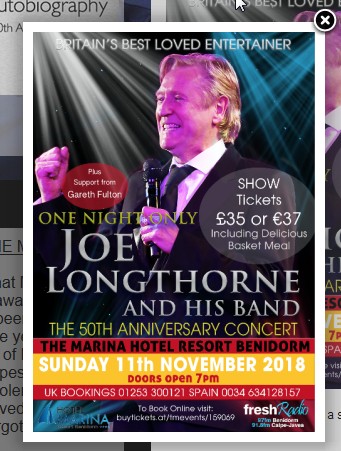 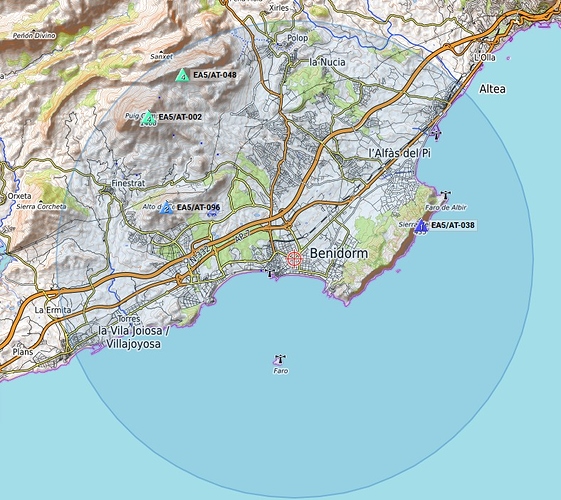 Well, I’ve never heard of him. But each to his own …

No new uniques without Jimmy - not that I’d have time or transport to do an activation anyway Phil. Flying out Saturday, gig on Sunday, flying back Monday. Highly unglamorous and no SOTA potential. I’ll be more than pleased if I even get chance for a dip in the pool and a paella!

Walt - JL was a household name as I recall in the late 80s, with a weekly TV show on ITV, but you are not alone in never having heard of him - plenty I speak to haven’t - even my XYL when I first got the job! Fortunately, enough have to keep box offices good - and keep me in a job!

Anyway, two belting activations in GI today, including Marianne’s very first time up Divis summit - even though she is the one originally from GI! Relaxing now in a Belfast bar before the overnight ferry home tonight.

For the first activation of the day, I set out alone around 0530 UTC. Around 45 minutes later, I was in the parking area adjacent to the start of the access road up to the masts on summit.

I started along the track via headtorch light, but soon turned this off as dawn started. 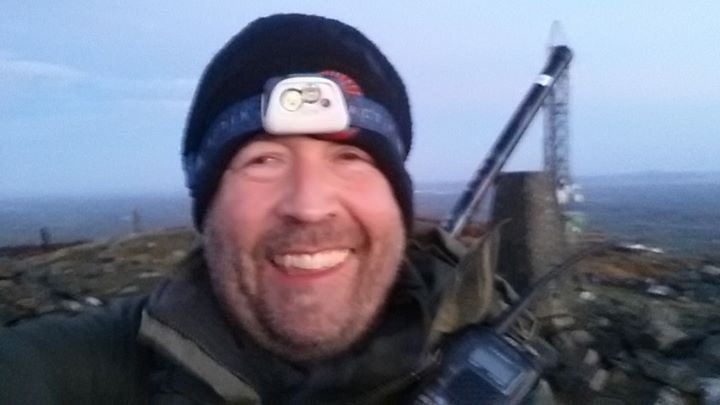 I enjoyed the easy 30 minute walk to the summit, and the views rewarding me at the summit.

We had to check out of the accommodation in Belfast at 10am, so considering the likely heavy rush hour traffic getting back into the city, I opted for a 2m FM handheld-only activation.

This was an easy qualification - four QSOs coming inside six minutes. As ever, Robert MI0GDO in Antrim was first in the log! 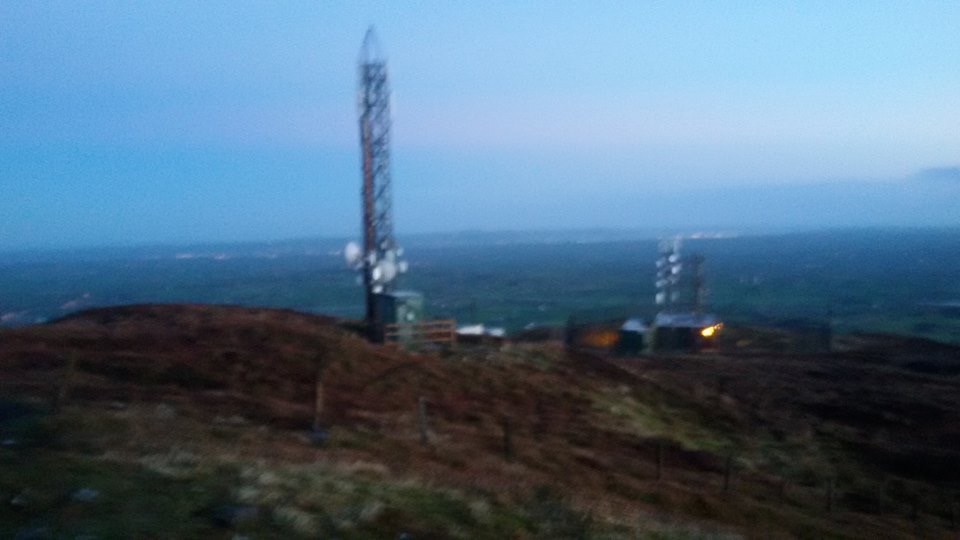 I was back in Belfast by 0915 UTC, so all was well. We checked out, then went for a wander in the city centre, with breakfast being a key priority.

After eating, Marianne was up for a walk, so we drove back up through the Falls and onto Divis. We parked in the main National Trust car park opposite the start of the track. 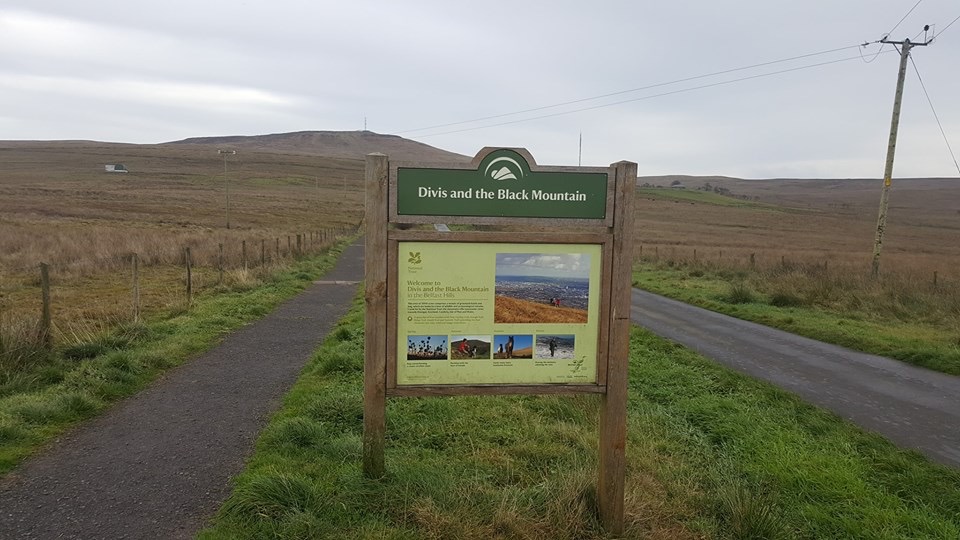 Marianne and Liam marched on ahead on the access road, so I followed them. Jimmy, behind us, was seen to branch off left on the Summit Trail route - we would see him again at the summit. 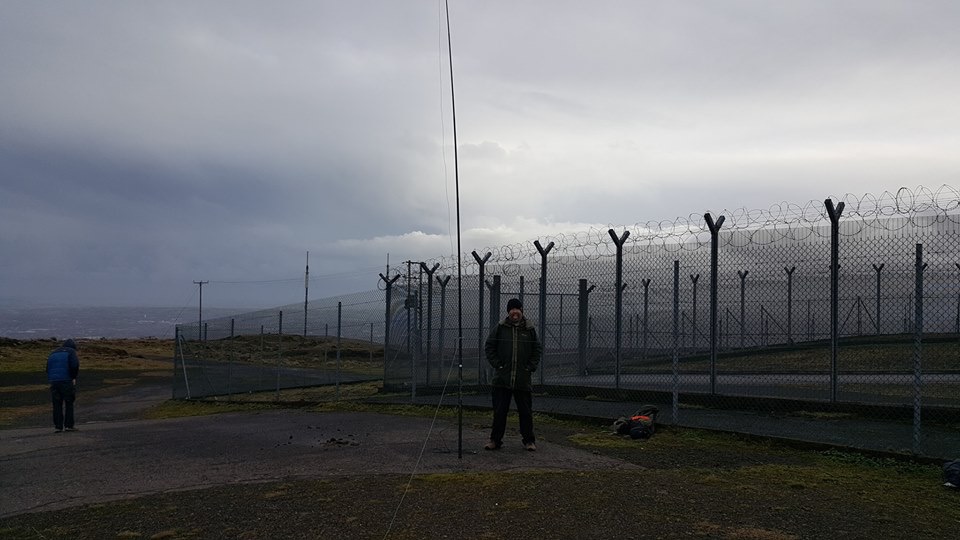 The views were good, with Belfast Lough, Strangford Lough and Lough Neagh all visible. I did wish we had been up earlier though, around 11am when we had clear blue sky and sunshine; it would have been spectacular. 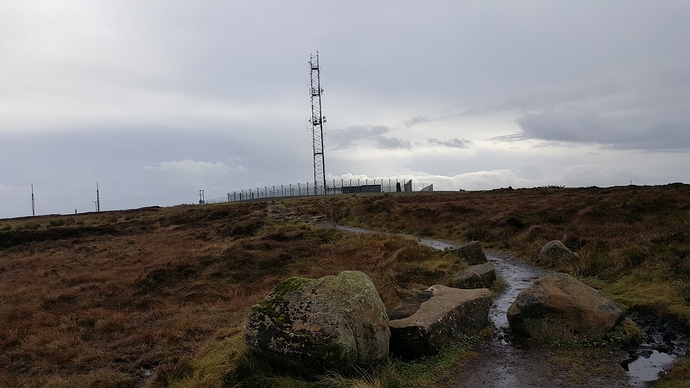 Jimmy and I both set up our stations on the sheltered side of the transmitter compound, both using the compound fence to secure two minutes f our guylines/ radials. 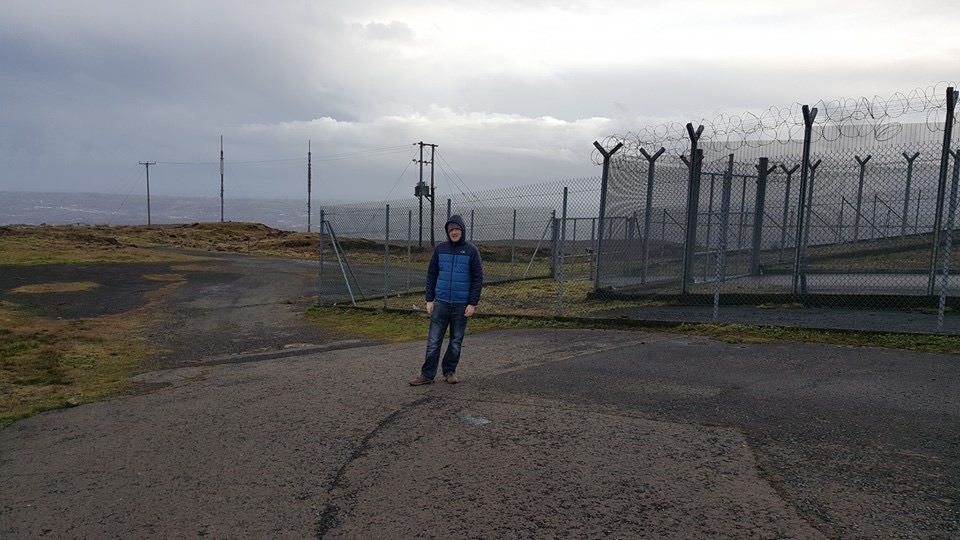 Jimmy MI0HGY/P got a decent response on 2m FM, and racked up seven QSOs back-to-back. Meanwhile, on 20m CW, I made 18 QSOs for an easy qualification of my own. 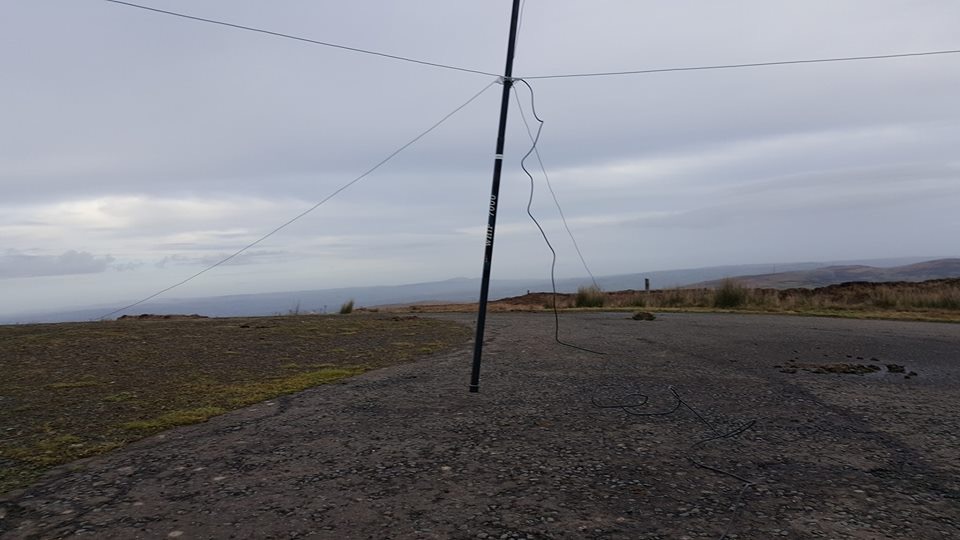 Marianne and Liam pottered around the summit, taking photos etc. I anticipated Marianne might enjoy Divis, but she wasn’t at all impressed, although she did like the walk. 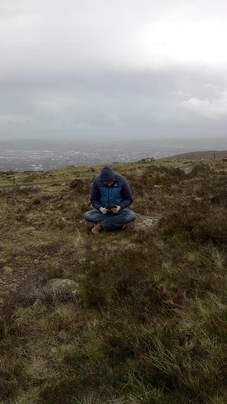 Marianne did eventually demand the car keys though, and set off on the descent with Liam. Jimmy and I wrapped up the last few contacts and started packing away. 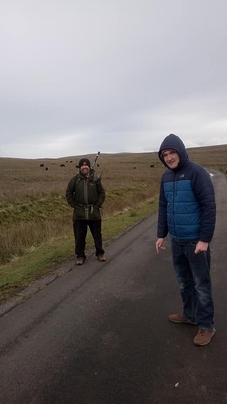 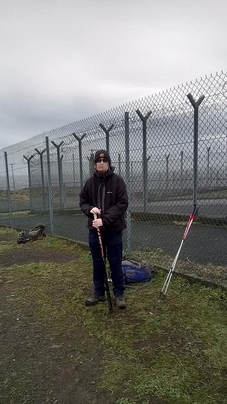 I was next to set off, leaving Jimmy behind to complete his packing away. I took the Summit Trail route back to the main track. Jimmy did the opposite and walked down the road track. 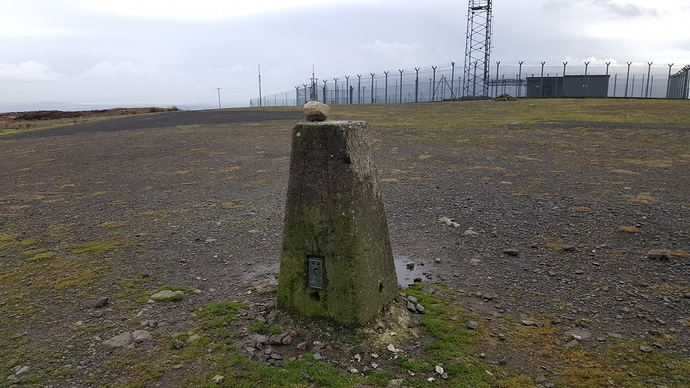 It was beginning to feel a lot like Christmas when we got to the car to be presented with iced mince pies by Marianne. We then returned to Belfast and a great bar called McHugh’s where we enjoyed some tasty wholesome food and fine local ale. 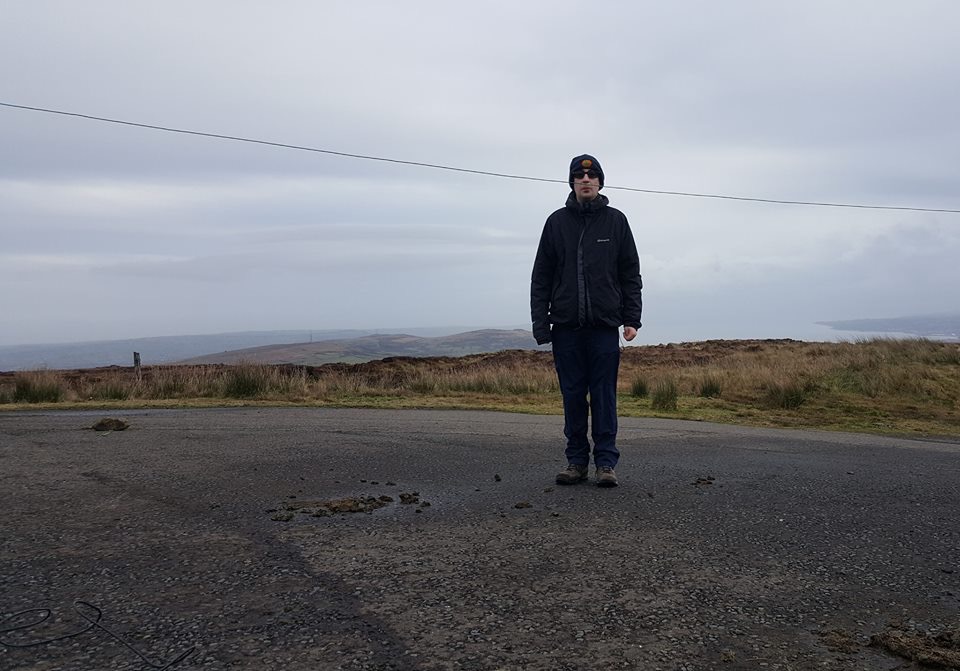 After a bit of a wander around the city centre shops, we returned to the car and checked in for the overnight ferry back to Birkenhead. 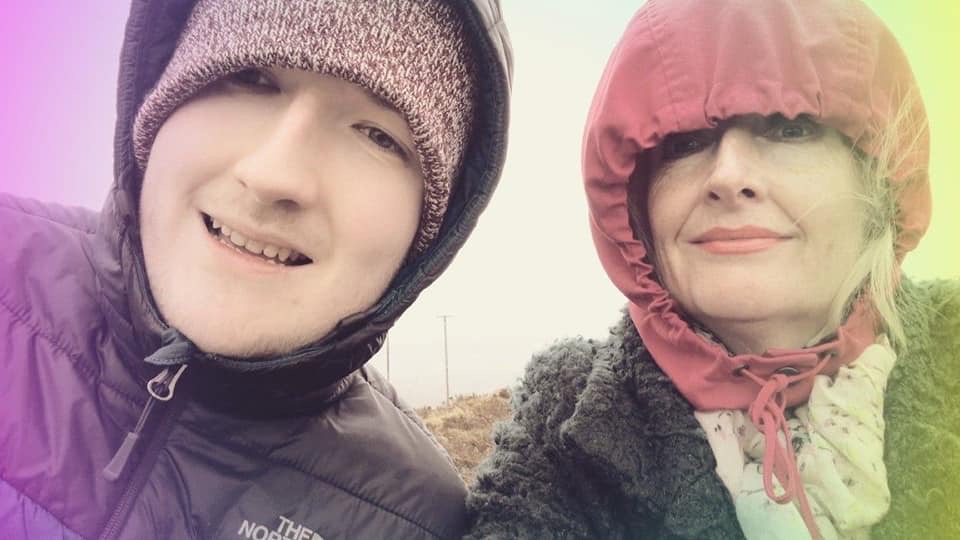 I had a fiddle with my satnav, which had been stuck on “Lookng for GPS signal” for three days. I couldn’t get it to see the satellites, nor find a solution online. Any bright ideas out there?