We woke to another glorious sunny day – sad to be packing up, but at least we had another day’s worth of activating before catching the ferry home. We left just after 10 having been chatting to the owner for a bit. It took us a bit under an hour to get to the parking for Slieve Gallion quite of lot of which felt to be stopped at the many traffic lights in Cookstown! We parked at the official car park picnic area and viewpoint at H822882, though we later discovered that there were places further up the road where it would have been possible to pull off the road and park.

The sun was shining brightly as we set off up the road, we cut across the first hairpin, but otherwise followed the road as it meandered its way upwards, getting views over Lough Neagh and towards the Antrim Hill, with the distinctive whale of Slemish visible, though the views of Lough Neagh itself were misty. Where the road took a 90 degree right towards the lower sub-summit with a transmitter station we headed left on a track which started off slightly downhill, but then ascended via several turns becoming progressively fainter, before coming to a fence with a stile, from where a boggy path led towards the now visible trig point. We now had good views back to the main Sperrin range. The trig point had a distinct lean, but seemed stable enough, so Caroline took advantage of the lean to get the VHF antenna more vertical than usual, which Martyn move a little away to find a reasonable dry patch for the HF antenna. This hill had a good take off and Caroline had the hill qualified in under 10 minutes, getting 9 contacts before moving to 7MHz for another 16 contacts. Martyn got just 7 contacts on 5MHz, but we both grabbed another S2S with Victor GI4ONL on EI/IN-042. Having finished with HF Caroline returned to the VHF radio to do some final calls, and was very surprised to hear a faint GM7PKT calling summit to summit, and even more surprised when Robin told me he was on GM/WS-161 north of Fort William, we exchanged reports, but his signal disappeared before Martyn could also work him. We later concluded that the path was probably aircraft reflection: it’s this sort of unexpected contact that fascinates Caroline about amateur radio. This was one of the summits where we saw some other people both on the road and passing the summit, but it was still pretty quiet.

We returned to the car and decided we needed a fairly simple hill to do to ensure we were in plenty of time for the ferry. We chose Big Collin, which we had chased earlier in the week, so an activation would make it a complete. We parked in the picnic area car park at J237973, and having read the information board about the two aircraft crashes on the hill, headed SE along the road to the track entrance at J239971, where there would also be room to park without blocking access. Over the gate we followed the track briefly, but then headed over the rough grass straight towards the highest point. The exact highest point was unclear – there were several depressions in the summit round. Although the sun was shining there was enough breeze to make it worthwhile dropping down slightly away from the wind. Again Caroline qualified with 4 contacts on 2m FM in under 10 minutes, but then nothing, so she moved to 7MHz (9 contacts) after Martyn had 12 5MHz contacts in under 15 minutes. We decided we had time to try 14MHz before heading off to the ferry, but it yielded just 3 contacts. We dropped down to the track a little quicker on the return and returned to the car. Our next stop was the Tesco at Glengormley where we bought dinner to eat in the car. We had intended getting salad and cold meats, but on passing the hot food section realised that they had Cumberland sausages and bacon rolls reduced for quick sale, so we got some of them to go with the salad. We slightly overestimated quantities, and Caroline couldn’t manage all the Cumberland sausage, but it made a nice change from cold meat. We were glad we had eaten before heading off to the ferry, because although it had arrived on time, there was a problem which stopped us from boarding until late. Despite the late departure the ferry caught up the time and arrived in Birkenhead on time at 6:30.

having read the information board about the two aircraft crashes on the hill, headed SE along the road to the track entrance at J239971, where there would also be room to park without blocking access. Over the gate we followed the track briefly, but then headed over the rough grass straight towards the highest point. The exact highest point was unclear

Just two aircraft crashes!
As a youngster (well younger than I currently am) I spent hours on top of Big Colin flying (and crashing) R/C Gliders!
There were few weekends when the bins at the carpark were not full of balsa wood

The summit is actually very distinct, It has a burial mound on top which has slightly collapsed, giving it a little depression you can sit in!

Looks like you had fun, thanks for all the reports.

The summit is actually very distinct, It has a burial mound on top which has slightly collapsed, giving it a little depression you can sit in!

Ah, so that’s what the undulations were about. Yes Slemish looked a “must do”: we had thought of doing it on the Saturday we arrived, but the weather was poor and we thought it deserved good weather. We hope to be back some time to do it.

Good to see a picture of Slemish (and read the accounts of your many hills) which brings back memories of our visit last year. It has a large car park, visitor centre (with toilets!) and a waymarked (at the beginning anyway) route up. I would strongly suggest that you each take an additional large rucksack when you decide to ascend that very steep hill. This will give you an extra option (that of paragliding down…) when you peer off the top and wonder how to reach the level ground way below. I have vertigo so this if fairly often a problem and particularly so on this superb, but very steep, hill. It really is a fantastic view from the top and well worth a visit in good weather. We ended up walking quite a long way along the top before finding a path that started down and then managed to wind our way down until the flatlands were reached again. It is certainly more interesting than Big Collin and, in clear weather, you will certainly know when you have reached the top!

Thank you very much indeed for all the detailed accounts of your ascents which we will be noting down as we may possibly be in the Sperrins next year. Would you recommend Pat Larry’s Cottage - and is it fairly easy to reach the summits from there as I was expecting to want to be a bit further north (Plumridge or similar) but hadn’t found anything that looked promising (with wifi) in the area?

Good to see a picture of Slemish

OK, here’s another one, taken from the top of Big Collin at 780mm focal length (35mm-equivalent), It probably won’t show on the reflector but in the original image you can just make out two people standing on top. 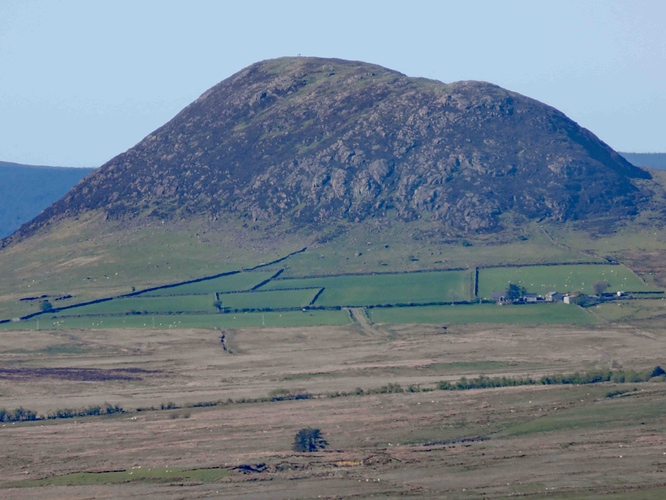 Taken from the same location, this photo of my antenna was a bit less successful: 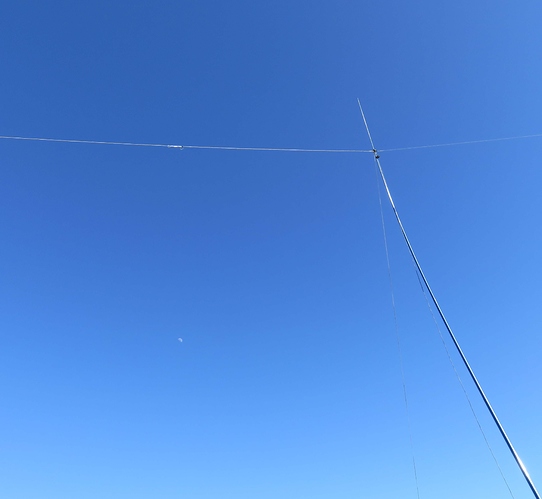 It was meant to feature the moon, but it came out a bit small

Would you recommend Pat Larry’s Cottage

We certainly would. It was an excellent cottage; Isabella works very hard to make guests welcome. Mobile phone coverage in the area is poor but the WiFi was fast and reliable and took everything we threw at it including daily backups of all our photos.

Would you recommend Pat Larry’s Cottage - and is it fairly easy to reach the summits from there as I was expecting to want to be a bit further north (Plumridge or similar) but hadn’t found anything that looked promising (with wifi) in the area?
73 Viki M6BWA

To answer the second part of your question, it was a reasonable base for getting to the hills. The roads to the north of the cottage weren’t good for getting anywhere quickly: mostly single track with poor visibility. However the road into Greencastle and onto the B & A road network was pretty good, and the road running east through 6 towns was reasonable. Ideally we would have liked somewhere in the Plumbridge or Newtonstewart area but we couldn’t find anywhere that fitted our moderately demanding requirements.

Thanks very much Caroline, if we go to the Sperrin Mts then I think we will follow you there (as we did to the Jays near Newcastle). Where are you going next year???

Where are you going next year???

Not thinking that far ahead yet, but we’ll probably give Northern Ireland a miss next year. Quite likely that two of our trips will be Scotland, and one will be Wales.