Tal-y-Fan was the first of two activations during the Llandudno week. The second was Snowdon; see: G4YSS: GW/NW-001 Snowdon on 11-04-17

INTRODUCTION:
A one-week family holiday in Llandudno made this possible. However, I had actually planned to be at Blackpool Radio Rally but my XYL booked the holiday instead. So as not to miss out on the fun completely this year, my best option was to work the rally or at least as many as the attendees as possible, from a suitable summit. I managed to put on a SOTAwatch alert using the hotel internet facility.

Tal-y-Fan is an easily climbed summit that overlooks Blackpool very well and it’s only a 25-minute drive from Llandudno. Normally there are views of the Irish Sea to the north and big mountains to the south but there wasn’t too much visibility today due to haze. Grass, bilberry, gorse and heather characterize this summit. Tal-Y-Fan was resurveyed a few years ago and found to be a no longer a hill but a mountain, a few inches over 2,000 feet.

It’s best to avoid the gated road via Rowen, which is a short-cut but a very narrow road with two gates to open. Instead it’s worth going further down the B5106 from Conwy to the south of Castell, before turning NW to the start point.

Route:
The route up is via a grassy path through gorse and heather; easy to follow and not too steep. There are ladder stiles to climb at the start and at SH 7278 7222 and SH 7272 7236. Three options are possible before turning right for the summit. You could take the path south of the wall but it looks a bit rough. The path immediately to the north of the wall is a bit rocky and one must lose height on the way, albeit 5m or so.

I set up beyond (east of) the trig point amongst some large rocks but I had to probe around to get the mast for the 2m beam firmly anchored in good soil. The 4m vertical sits on top of a thin carbon rod. Both are fed with RG316 coax.

145.600 FM (GB7RW - Scarborough) - 2 QSO’s:
145.400 was occupied and while casting around for a clear channel, I heard a familiar voice. Unbelievable! This was Ken 2E0KEE from my own village, Irton near Scarborough. He was talking to the chairman of the Scarborough Amateur Radio Society; Dave G0VXE through the dual-mode repeater at Robin Hood’s Bay.

To say these were QSO’s was stretching a point. Despite 50 Watts and three elements, I was not getting into the repeater at all well. All they managed to get out of it was my callsign but at least that told them that I was ‘somewhere in Wales.’ ‘You’ll have to tell us where you were at the next club meeting, John.’

145.575/ 145.400 FM - 34 QSO’s in total:
First in the log was M0CQE and Paul remembered me from the New Year overnighter on NP10. He also took it upon himself to provide a spot, which seemed to set the scene for the remainder of the activation.

Next came G0VOF/P and having stayed overnight at the Norbreck Hotel, Mark was outside and waiting for the Rally to open. We exchanged at 59 both ways and had our customary chat. Power for this and the next few QSO’s was 5 Watts.

After Mark, the activation started in earnest, albeit at a leisurely pace and I worked the following stations: G0OHY Arthur near the M6-J13; M0OSA/P David nr. Huddersfield at 450m ASL; M0YDB/P Dave in a camper van outside the Norbreck; G6NHW/A Pete at Morecambe; 2E0EVD living in SW Cumbria; GM4WHA Geoff in Annan; 2I0NIO Andy in Armagh and GW4BZD/M Chris at Bangor.

At some point I must have switched the linear on but just when that was I don’t remember. After this it was going on and off as required and there were also beam heading changes. It must have sounded bizarre to some of the people trying to contact me.

If this had been a stage performance, we were now ready for the ‘main act.’ A lot of the planning had been aimed at trying to work my friends from Scarborough and Pickering, who were travelling across the Pennines to Blackpool for the rally.

At 09:15 local time, I heard a strong call from Dave G3TQQ. Dave passed the microphone around the vehicle and very quickly Pete M0HQO/M, who gave the QTH as ‘M62-J21’ was in the log. Roy G4SSH/M told me they’d just passed Scammonden Dam near Halifax before the driver; G4OOE/M - Nick made it a full house. Due to undulations in the motorway and the lie of the land, I got four different reports ranging from 53 to 59. Job done! The ‘lads’ were all in the log.

With the excitement over, it was back to business at 09:25 as follows: 2E0KHI Keith in Liverpool; G6LKB Dave in Ulverston; G6WRW/M Carolyn and M0YHB/M Helen, rally-bound from Kidderminster (next stop IOM) and parked up at Fleetwood.

Back to 145.400 FM:
Re-establishing the 2m frequency didn’t take long. From 10:07, into the log went: M1LSD/M Lee waiting outside the rally at Blackpool and M6ADF/P Ted also at Blackpool with the same intention. Graham M0OAT/P S2S on Pike of Blisco G/LD-024; G0CWP/M Keith also parked at the Norbreck; M0PWD Paul – North Lancs (actually Silverdale); M3XYY Alan in Liverpool; M0SSD George, Dalton-in-Furness; M6AIF/P Kieron near Wigan; GW4CQZ Martin – Denbigh and GW9NZN/P Dave S2S on GW/NW-054. Lastly on 2m, G0TDM/M John ‘medically rebuilt’ and in the ‘Blackpool Rally lane’ of the M6 south of Penrith, with Geoff G4WHA/M the driver.

At some stage during the above, the linear stopped working, probably due to under-voltage and the battery had to be changed. A test confirmed its no-functionality but whether it worked with the new battery hooked up, I wouldn’t know and it wasn’t really needed.

70.400 FM - 2 QSO’s:
Using the maximum available power of 3.5 Watts to the home-made end-fed vertical, I re-worked GW4BZD Chris (Bangor) after arranging a 70.450 MHz sked on 2m-FM. Somehow, when picking up the rig, I fumbled the VFO and we ended up on 70.400. It was lucky that Chris’ rig was a posh one with a cascade display that showed up my error.

Chris was using an upside down G5RV with various attachments to provide resonance on some of the VHF bands; 4m being one of them. Chris was a cracking 59 to me and that’s the report that came back. His invention obviously works well.

The final QSO was with a 4m ‘old hand’ namely John MW1FGQ in Holywell, Flintshire at 11:10 local time.

Descent:
With an easy-going 13:30 Llandudno deadline to meet, packing up was a leisurely affair. I reached the car at 12:06.

Comments:
This was a pleasant morning out with sunshine and barely a breeze. Everybody I met up there was smiling! It was great to work the rally punters and my friends from North Yorkshire. I hope you all had a good day out. All being well, I plan to be there next year, after a morning activation of course.

The equipment did its job well. The linear apparently has a pre-amp in it. Signals at the 54 level jumped to 59 when it was switched on but no real testing was done with this.

THANKS TO ALL STATIONS WORKED and invaluable assistance from Paul M0CQE for providing a spotting service which undoubtedly helped. 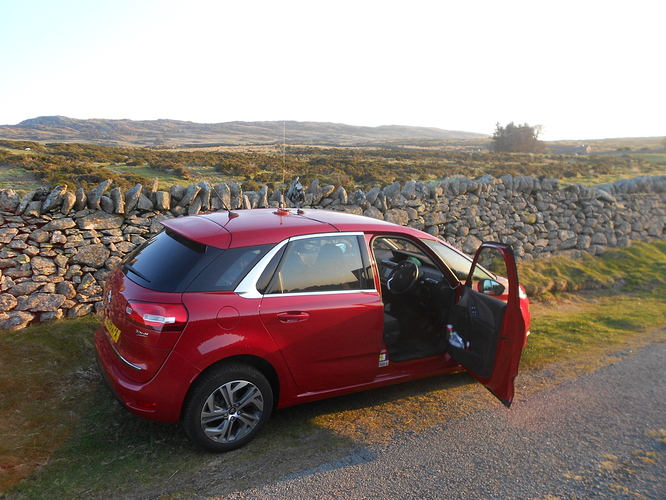 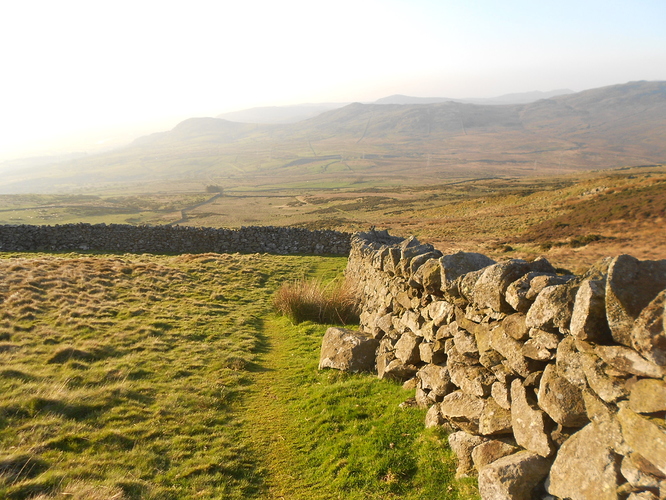 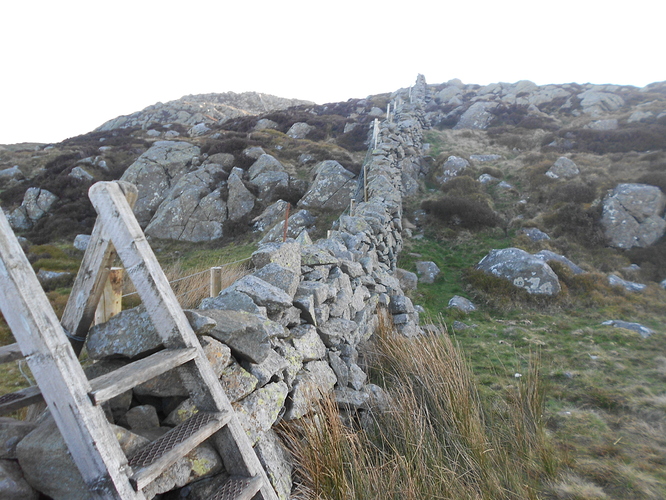 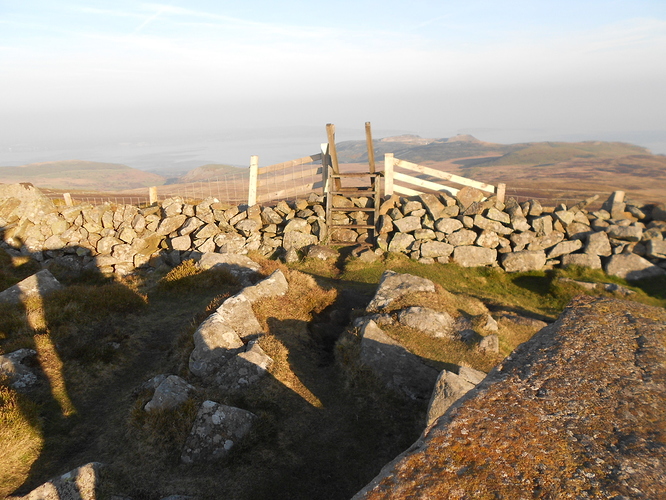 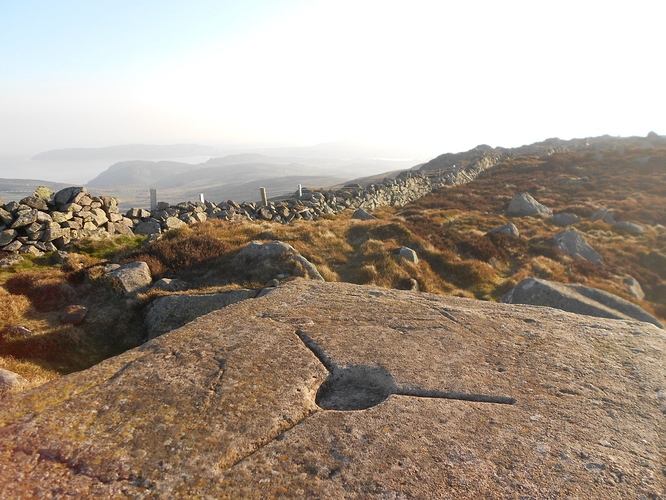 Above: Summit of Tal-y-Fan GW/NW-040 and top of trig point 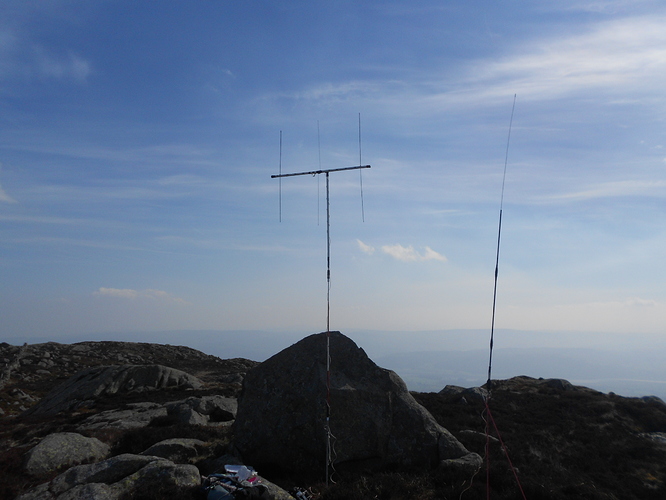 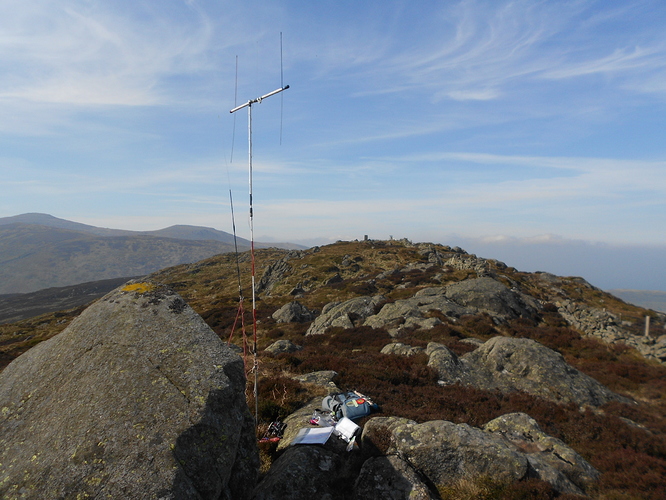 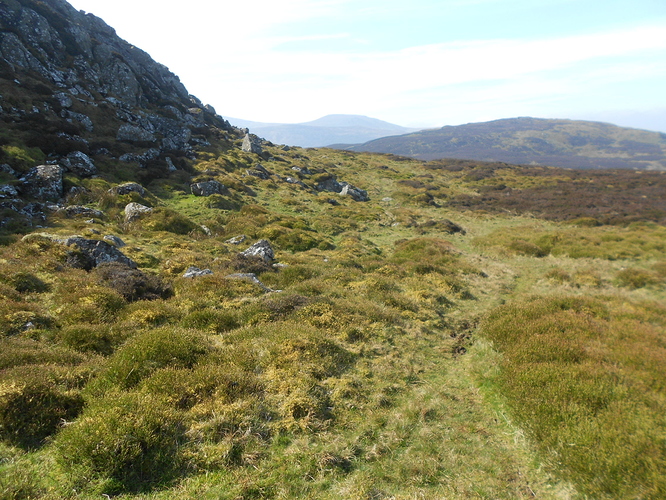 Above: Grassy path which skirts the rock features just after leaving the summit of Tal-y-Fan. Photo from approx… SH 7285 7266 looking approx. SW 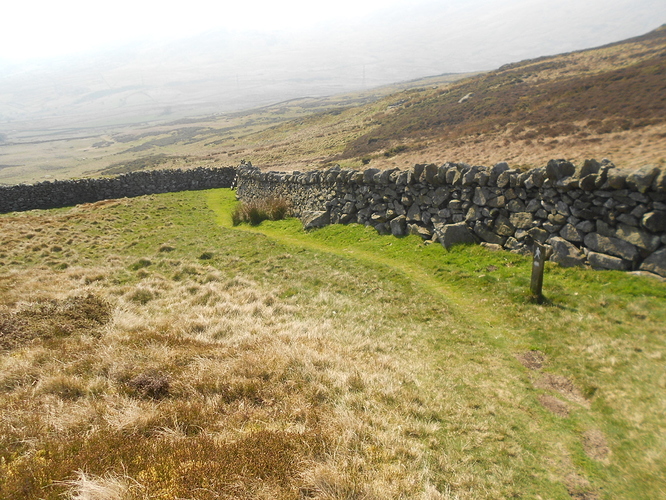 Hello John. Thanks for the report, very descriptive and interesting. I look forward to the photographs to follow. Sorry you missed the rally, but you did provide a lot of enjoyment for many people with your activation of GW/NW-040.
I am happy to have helped, in a small way, with the up to date spots. Well done with the re-location of your TX to 145:400 and contact with Dave G3TQQ/m, Pete M0HQO/m, Nick G4OOE/m and Roy G4SSH/m. That was good to hear. They where close to my QTH at the time and I managed to have a short QSO with them after they cleared with you, Great Guys and fine SOTA Activators, I have had many good contacts with them and lots of Chaser points.
Best Wishes to you and our Family. Hope your holiday is great. 73 de Paul M0CQE.