INTRO:
Another rotten day - our third out of the five available! There was no set walk; just a late morning ramble along the banks of Derwent Water by Nick, Leslie & Joan in constant rain. David, our walk leader did the same in the afternoon, mainly to test a new purchase – a pair of waterproof boots, while I elected to have a crack at Blencathra. ‘Why bother?’ they asked, ‘It’ll be dreadful up there.’ But we’d come to the Lakes for a walking holiday that had been curtailed on two consecutive days so far. I thought it was about time we ‘took on’ the weather.

Blencathra was a reasonable choice except that it has no kind of summit shelter. It’s just up the A66 from Keswick and relatively quick to climb. If I got wet, I could be back to Keswick and in the shower within half an hour or less. However, I wasn’t going to get wet was I? The forecasters had the rain stopping at 3pm so if I went mid afternoon, it would be OK. All I would have to contend with were high winds on the summit. Oh yeah? As I write this at 10pm the same day, it’s still raining!

The rucksack was emptied of batteries and all things HF but the handheld plus poly-bag stayed in. I pre-attached it to the j-pole and assembled the short mast as much as possible to make it easy on arrival.

Execution:
I left the Sandon B&B in Keswick just before 2pm, parking in the layby just before Scales (see ‘Route’ above). A young chap was there with his bonnet up and steam issuing forth. Using my vast experience with old bangers, I offered a few suggestions then set off walking at 14:18 wearing a fleece, over-trousers and a brolly. I had a Goretex jacket in my pack but I don’t like waterproofs and will resist them to the end. An umbrella is far more sensible. It allows air circulation and I have used one to good effect on the fells countless times. You just have to remember to keep it pointing into wind.

The DAB radio was tuned to BBC-WS as I am not fond of the DJ on radio-2. So far, so good but the higher I got the windier it became. Normal, thought I but before long I was in cloud and walking beside a sharp drop. These features tend to upset lamina flow, sometimes augmenting the wind and sometimes almost reducing it to zero. The direction kept changing abruptly and it was blowing so hard that I had to partially furl the brolly into a point shape rather than a canopy. Of course it was only a matter of time and two thirds of the way up a massive gust from behind wrecked my favourite brolly for good.

Now defenseless against lashing rain and quite wet already, I elected to carry on hatless in just a fleece and base layer. Eventually the summit loomed out of the fog. Just to prove I was there, I took a summit selfie but what a grimace!

I managed to find a partial null point a few metres NE of the summit that would negate some of the wind, whilst still allowing the top of the j-pole to peep over to the south but it was still going to be a challenge. Sitting down on the grass in the rain and setting the rucksack base-first into wind, the log remained just inside. Pulling out the Primaloft jacket, I put it on and raised the hood. It isn’t waterproof but it would certainly keep out the wind.

A call to Geoff G4WHA/A on 145.400 MHz ‘just in case’ was not answered but the same call on S20 thankfully was. When you’re hard pushed, it’s a relief to hear a friendly voice and although Geoff was at work at the shop in Penrith, he spotted me immediately.

John G0TDM, also a handful of miles away in Penrith, was next to call in followed by MW1FGQ in Holywell, North Wales. Then the frequency dried up with the crucial fourth QSO absent from the log. I was getting wetter and already a little desperate as I plumbed S20 for another QSO. Geoff spotted me again. ‘One more QSO needed.’ John offered his ‘throwaway’ ‘B’ class callsign and I eagerly ‘snapped his hand off.’ However, that might fool the database but it wouldn’t satisfy me. I had to get that fourth QSO somehow but Geoff pointed out that chasers would not be expecting to hear local summits on the air on a day like today.

Eventually, after more calling on S20, I heard a 59 signal coming back! This was Ron G0UCB in Keswick, who I’ve worked before. After telling him what a savoir he was, we exchanged at 59 both ways but he couldn’t remember my name. Unfortunately, every time I gave it he missed it due to ‘terrific wind noise.’ He mentioned that he was a bit deaf and moreover, he had just been given a fancy new active speaker that may have been ‘muffling my voice.’ After what seemed like an age but was actually around five minutes, he had the name in his log and we were both happy.

Just as I was going to QSY to 70.450, I heard a fifth caller. This was Derek 2E0MIX in Whitehaven. Good insurance, we had a brief chat. John asked if I was doing any other bands but the only one I could offer was 4m-FM, so we agreed to meet there. All reports were 59 which was a blessing, because I can barely read the log.

70.450 FM - 2 QSO’s:
John G0TDM and John MW1FGQ were reworked on 4m using 3 Watts from the IC-E90 to an extended 2m band rubber duck. These were 59 reports both ways. Geoff G4WHA/A in Penrith (who spotted the QSY) could not work on 4m today because the gear was inaccessible. John G0TDM had to climb up to the loft to work me and to ensure a contact with MW1FGQ (59/ 55) I had to stand right on the summit in the teeth of the howling wind and high-speed horizontal rain.

After announcing ‘QRT if not called’ I was called by Derek 2E0 MIX who gave me a 59 report. I thanked everybody; yes I was truly grateful to these dedicated chasers and especially to Geoff G4WHA/A for those vital spots.

Descent:
With no more takers, I was free to pack up and descend. Throwing everything into the pack ASAP, I switched on the GPS and started the walk down through the fog. I couldn’t listen to the one inch cube radio. A wet hand in a deep, wet pocket stopped me reaching it among the many other items, so I zipped up and headed down as fast as the slippery conditions would allow. Nothing I had on was waterproof so I was soaked to the skin. At least I was still warm and that’s the main thing.

The car was reached in 45 minutes at 16:47 and I was back to the B&B 20 minutes later. It was here that I discovered that six square inches of my underpants were dry. Everything else was a soggy mess and that included most of the pocket contents but I had the satisfaction that I’d taken on the weather and won! Well, sort of?

Comments:
Where would we be without chasers? When I needed a quick turn round in bad conditions they were there to help.

This was what you’d call a ‘smash and grab’ just the job in the circumstances. Bad weather or not, I didn’t have a lot of time either.

The forecasters don’t often get it wrong, well not on the bad side at any rate. They usually err on the side of caution but the rain that I was banking on stopping at 3pm carried on all afternoon and evening. Yes, I got a soaking but at no stage did I feel cold; probably due to the ratio between physical activity and summit time.

That’s it for this holiday. Just three summits activated (the three in the LD Northern Fells) and two days lost to rain. We hope for better next year. I hope to get out and on the air again soon, when summer returns, if it does? Looking forward to a sortie with Sasha the Lurcher or maybe VHF-NFD will be the next.

Thanks to this small band of chasers and especially to Geoff G4WHA for the spots. Magnificent support! 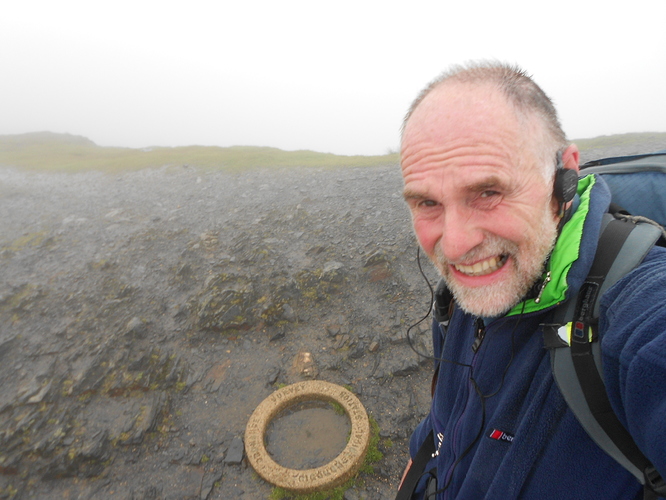 Above: Summit of LD8 and op. You can’t see the wind and rain. Just go by the expression. 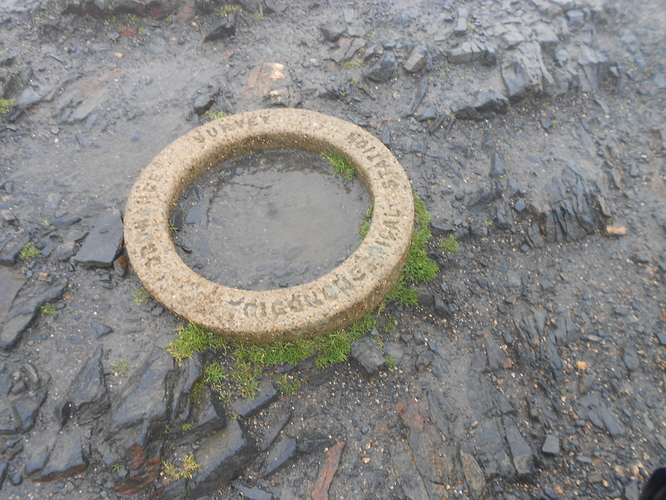 Above: Summit of LD8 and diminutive trig point 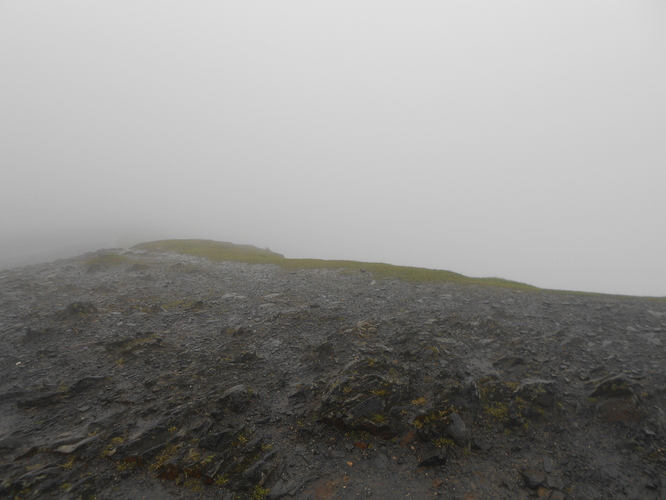 Above: Summit of LD8. The view 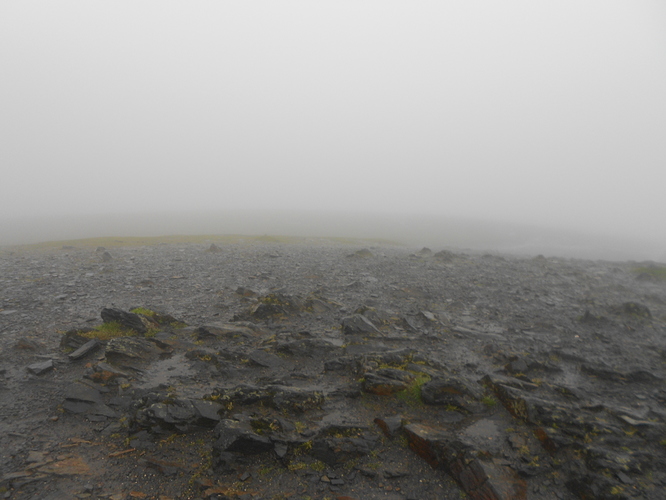 Above: Summit of LD8. The other view

LINKS to other Lakes Week 2017 reports:

Pleased to be of assistance in spotting you. I did not expect anyone to be out at all given the weather. I never noticed your alert as work was very busy that day and I was not bothering looking at any alerts. At least you got it qualified fairly quickly so you could get off. I see Blencathra every day while coming to work and today (Friday) the top was covered in cloud. Most days this week you could not see anything of the mountain. Weather was that bad.

Many thanks for all he contacts on the 3 summits this week.

Well done John! True dedication! I now have a 2m FM waterproof handheld, which might be a ticket to previously unconsidered activations depending on whether I find out I enjoy extreme weather or not. I’ll be taking it on days where the weathermen cannot make their minds up (more often than not).

I did listen out for you but Blencathra is ‘tucked around the corner’ compared to Skiddaw when checking line of sight to Windermere. Rather than skirting through Thirlmere valley you have Helvellyn and Seat Sandal firmly in the way! I don’t have HF at home so it is 2m or nothing at the moment.

Thanks for the effort writing the reports - it’s a great help for the rest of us ‘noobs’.

Wishing you better weather next time. Regardless, you have made some memories although maybe some you’ll be forgetting rather sooner.

I’d also like to re-iterate thanks for the dedicated chasers. Please continue the fine work!

Hi John,
Pleased to see that you had the same fantastic WX on the 8th of June as I had 70 miles north of you in the borders!

With me the day started dry, then became progressively wetter until a downpour about 14:00bst. It was the same for me, the rain got in where it normally does not. As a matter of clothing I wear fully polyester garments, Buffalo top and a Gortex (past its sell by date) waterproof jacket and over trousers. I don’t plan to keep dry just warm and wet.
Regarding the 857 It has always had a soft bag, I now have an additional roll top waterproof bag, I have learnt from my FM experience.