INTRO:
The set walk for today was Ullswater and the Dodds but after two days of almost non-stop rain and no activations, I elected to go solo on Skiddaw and spend as much time up there as possible. For once no rain was forecast but it wasn’t going to be perfect with 30 to 40mph winds and 4 to 7C. The easiest route from the southeast at Underscar was chosen again, as means to an end. The walking wasn’t important but putting a decent station on the summit with enough power to work for a few hours was.

Execution:
After a quick breakfast at the Sandon B&B and a 10-minute drive, a start was made at 09:47. The DAB radio helped distract from the monotony of ascent and a steady non-stop plod was adopted as usual. Last year it took 84 minutes to reach the trig point from the car park because of temperatures in the low 20’s but today with cooler, windier conditions; the time was shaved back down to a more usual 75 minutes.

Following summit photos at the trig, I set up the station 20 metres to the NE and about 1.5m height wise down the east side. This gave a little respite from the wind, though it was still strong. A large rock was procured and a seat made.

Getting the dipole up was tedious and took a little longer than on most other summits. This is because the soil depth is not much more than two inches and that’s where there is soil. I had to use the coax as a temporary guy until I could get the dipole wires up and angled right to keep the mast vertical.

CW signal:
At the end of the SSB session, I heard weak CW on the frequency, eventually making out ‘S2S…S2S.’ Because the rig jumps to one side when you change modes, I kept loosing the signal. Every time I got the mode changed and scanned to one side or the other, the signal had stopped. In the end I had to say in SSB, ‘Please give a long call so I can tune you in.’ I heard a di-dah-dit in reply. By this means I found Jack GM4COX/P and worked him S2S on GM/SS-097 with 559 both ways. To allow this QSO to happen, a frequency readout of 7.131.8 MHz was required. In other words 800 Hz down from where I’d been working LSB. I have fallen foul of this before. This QSO is one of the 22 indicated in ‘7.033 CW’ above.

1.832 CW/ 1.843 SSB - Nil QSO’s:
Despite being spotted by Geoff G4WHA, I had no success with 50 Watt CQ’s over a period of 10 minutes. Given the time of day, it was not surprising. A few people told me afterwards that they’d listened but heard nothing but thanks for trying!

Just like on 40m there was QSB about and some stations didn’t come back to the call-in but most of the ones that did gave me good reports. There were some lower figures from the USA as you’d expect. Power remained at 30 Watts.

14.285 SSB - 18 QSO’s:
Geoff G4WHA gave me a spot on this frequency, which I believe is a SOTA favourite. I usually use the old WAB channel of 14.265. First in was RW3XZ followed by UT7HA. Other countries worked: G; SP; OE; SV; OK; YL; DL and SQ. Again the same 30-Watts, produced by a 2.5 Watt drive level to the amp, gave the station a useable signal. DL3VZL, name ‘Sig’ near Dresden, asked for the GX0OOO direct QSL route, which is via G4SSH. The main battery, a 5Ah, was discharged by the end of this session.

5.400 SSB - 17 QSO’s:
My QSY text to Roy did not indicate the mode, so poor Roy was left guessing. However John G0TDM found me and spotted the new frequency. Just to be on the safe side, I used G4YSS/P on here.

60m wasn’t expected to yield many QSO’s but I thought it might help the closer-in chasers who wouldn’t have heard me on 40m. Adding 17 to the log was a very pleasant surprise and although there was QSB, the noise level was very low, at least on my side. I worked: G4ISQ; MI5UTC; G0TDM; G4WHA/A; EI9GLB; G0FEX; G0RQL; MI0WWB; GW4VPX; G1BLJ; G6NHW; G0WFH; G0NES; G4ZRP; G3UHN and GM0AXY. Reports were mostly good but QSB was deep at times so some 44’s, a 41 and a 33 report came in.

After packing up fully, I fought my way along the top with watering eyes in a 4-minute walk, in order to relocate further south at the edge of the ridge. I passed a mountain biker coming the other way and pushing his machine. It was impossible to ride in such a strong side-wind and impossible to talk even from short a distance. I waved and he waved back.

This time I was only a foot or so down the east-side, hiding behind some low rocks and getting battered by gusts from 15:53 to 16:37. The mast wouldn’t go into the ground at first either so I had to ‘mess about’ a bit to get it to stand up in the gale.

145.400 FM - 5 QSO’s:
I worked Geoff G4WHA/A (patiently monitoring .400 and also providing a spot). Next in was John G0TDM also in Penrith. There followed Tom M1EYP/P S2S on the Cloud G/SP-015. The latter contact left me feeling a bit stupid. Initially and without the phones plugged in, I only got part of his callsign so introduced myself fully. The response was something like, ‘No need for name and QTH John, it’s Tom at this end.’ I put it down to the racket caused by the wind and the fact that I’d now been combating it for over five hours, causing brain fade.

After Tom, M6VMS called from Windermere. Mark had been following my progress on HF all day and finally got his QSO with Skiddaw. The final caller was Adrian EI2KJ in IO63ST.

The above were worked with 5 Watts from the FT817ND plugged into a vertical J-Pole and supported by the bottom section of the HF mast. After a clear summit up to now, low-cloud was beginning to race across the ridge.

70.450 FM - 2 QSO’s:
John G0TDM and Geoff G4WHA/A in Penrith (who spotted this final QSY) were reworked on 4m using 3 Watts from the IC-E90 to an extended 2m band rubber duck, which has been modified to eliminate a previous poor contact. There were 59 reports both ways.

It was nice to get 70 MHz on SOTA again but further CQ’s went unanswered. To be honest I wasn’t sorry. Weather conditions had deteriorated somewhat. The wind, predicted to decrease to half the morning strength, was as violent as ever. I could no longer see more than forty yards and judging by the fact that nobody had followed the mountain biker to the summit, I was the only person left on Skiddaw. The station was closed at 16:23 BST but it took a while to pack up for the second time.

Descent:
After picking up a nice looking slate slab for a friend’s rock garden and with an 8 minute delay for boot adjustments, the walk back to the car was completed by 17:40 and I was back to the B&B 10 minutes later.

Comments:
HF conditions were very good with no sign of the summer doldrums just yet. 40m was doing a great job around Britain and out to the near continent. However I really would not have bet on 20m outshining 40 from the point of view of QSO count (42 to 40) and it also provided some DX.

When trying to bring in the closer UK stations, 60m did a reasonable job but I had to really concentrate not to give out the club callsign. The pace was slower on here, especially when compared with a semi-manic 20m CW.

160m CW brought in absolutely nothing and the same happened when I tried SSB. Several people had listened but didn’t hear a thing. Top Band was activated on the off chance but the middle of a June day is about as bad as it gets for 160m. Not only that but some 160m chasers were not available. Mark G0VOF was at work and Phil G4OBK now only goes down as far as 80m, though I believe his new Carolina Windom will tune 160. Roy G4SSH heard nothing and Nick G8VNW was not worked on any band today.

VHF takeoff from LD4 is as bad as ever. If you want to work to the south where many of the chasers live, all the big stuff is in the way.

I wouldn’t say that five and a half hours sitting up at 3k in a high wind was a picnic but the work load helps to take your mind off the discomfort. It’s nothing like what you have to put up with in winter, and at least it didn’t rain which was a blessing after the previous two days when it rained without a break.

106 QSO’s on a 10-pointer certainly made the day worthwhile and Skiddaw was relatively easy to climb in the cool conditions. 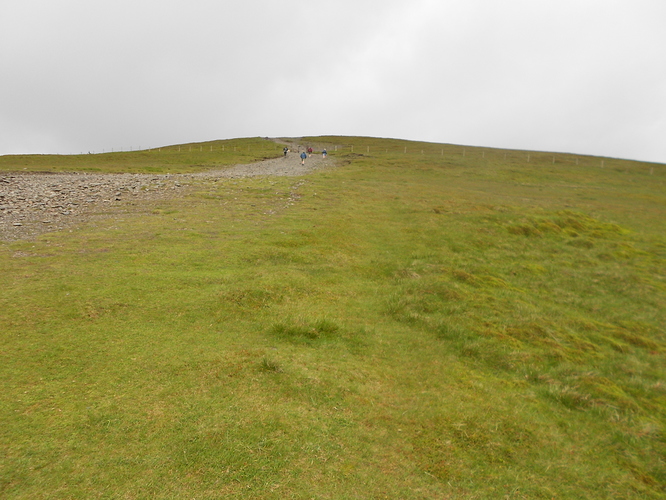 Above: Walkers approaching the summit ridge 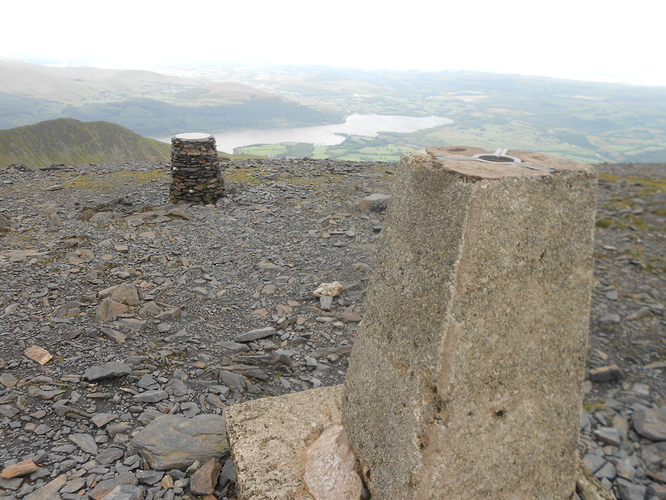 Above: The classic shot of LD4’s summit furniture 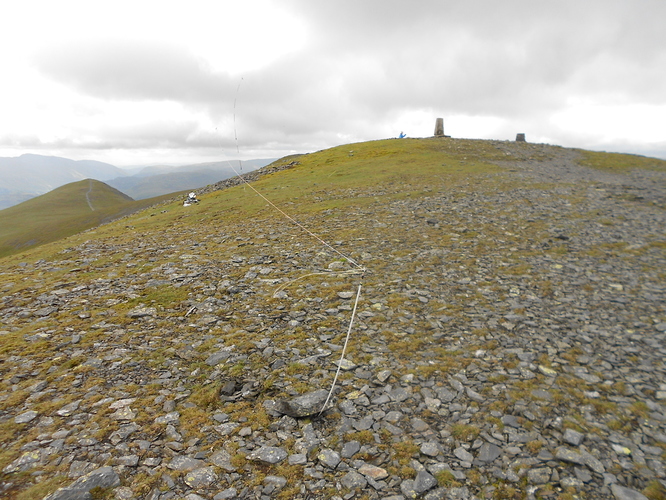 Above: The G/LD-004 Skiddaw HF activation in a strong wind 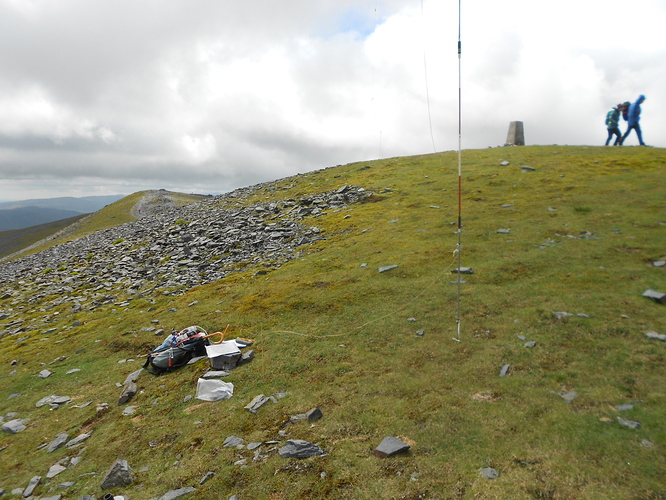 Above: The G/LD-004 Skiddaw HF activation a little way down the east-side 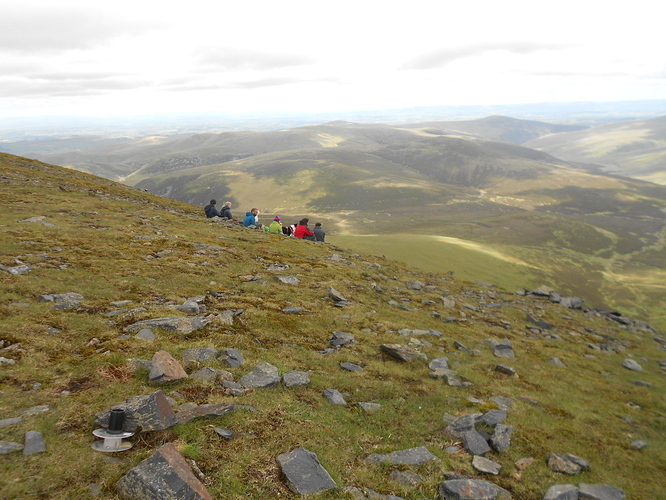 Above: The G/LD-004 Skiddaw HF activation. Walkers sit down the east-side to avoid the worst of the wind 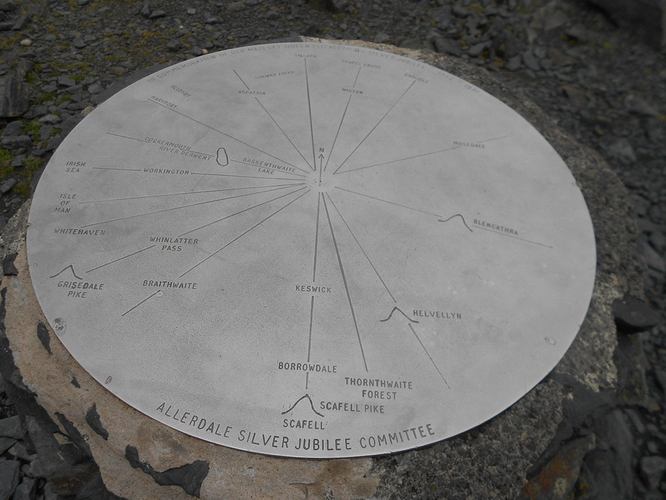 Above: The G/LD-004 Skiddaw summit plaque 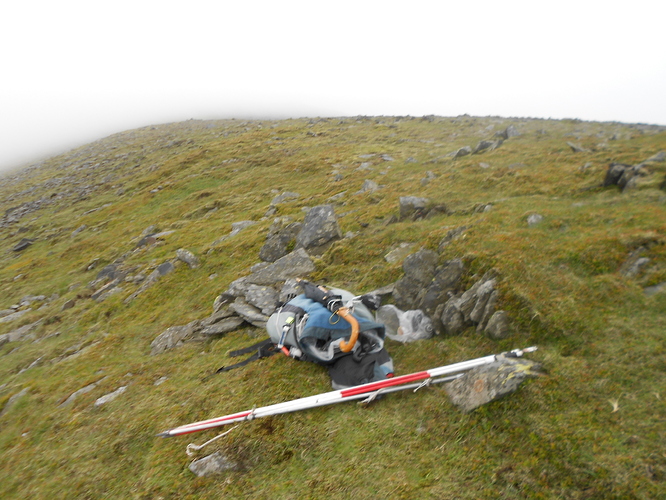 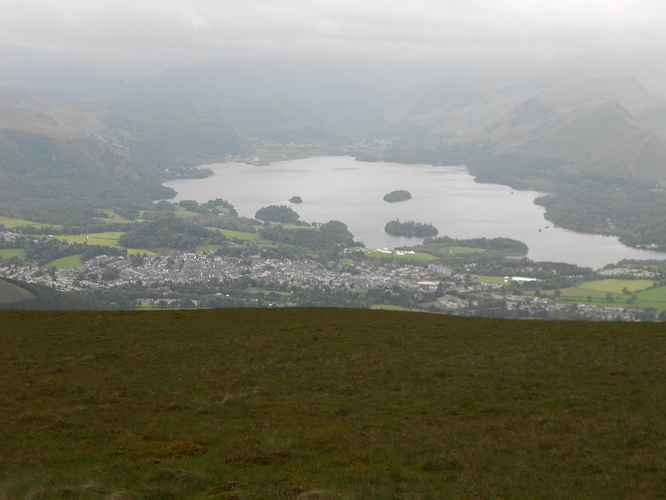 Above: A magnified view of Keswick from the Underscar - Skiddaw path on descent

LINKS to other Lakes Week 2017 reports:

A great report many thanks John and well done for the persistence - I’d like to think of myself as slightly more hardy than your average townie but I’ve been in situations before where I was either glad of a lack of contacts or deliberately using a rubber duck to limit the chasers and get the job done - shameless I know!

So far I’ve only had one SOTA QSO on HF (20m on Coniston Old Man to a Polish ham) - using the FT-817 on 5 watts with a Sotabeam quad-band dipole. I’m going to try 40m (out of my options of 20m, 30m, 40m or 80m) first next time I’m out-and-about but I think the key here is the MX-P50M which will be on my shopping list when I (hopefully) pass my Intermediate exam in a couple of weeks. I was going to ‘upgrade’ to an FT-857 or similar but now I’ve had some advice from fellow SOTA activators that the FT-817+amp is around 1kg lighter than an FT-857 I think I’ll revise that plan. I need to learn CW as well as at the moment it is SSB or nothing!

I’m hoping to activate Skiddaw in the next few weeks when I get a pass out from the YL and the weather looks tentatively agreeable.

You can add me to the list of people who listened out for you on Top Band, John. Nothing heard but at least I tried!

Great report and very pleased to have completed a QSO with you.