Plan is to be on Blencathra G/LD-008 this evening for the 70cm event. However only 5W to a horiz 7-ely ZL and LD8 is well screened in many directions. I don’t expect much on 70cm but will TRY to work Phil G0UUU/P & Phil G4OBK if he’s about, beaming east at app 8:30 local.

Plucking a frequency at random for SOTA chasers 432.222 +/- at say 9pm local and same for the easterly sked at 8:30pm. I will try to be there +/-. If there’s phone signal I will self-spot in case that’s occupied etc. Not promising anything - still got to climb it and already done LD10 today. It’s a bit warm here.

Well, I see that Corndon has never been activated on topband, so I’ll have to take my monster dipole with me!
No promises, but I will watch out for John’s spot, and try to be on around 10:00pm local also…

I will be listening for you both on 160m SSB.

I don’t have a 70cm beam here but I’ll see if I hear you with my 2m beam. The SWR on 70cm is acceptable and I’ve worked as far as LIncolnshire in recent RSGB activity contests with it! I should hear Phil G0UUU/P though as he is local to me.

No bother on topband though, I’m 99.9% certain that I’ll work you on that band. The aerial for that in my beech tree is a permanent installation - always in a state of readiness - now in full leaf and hopefully there won’t be much attenuation!

Good morning John. I hope you are not suffering too much from yesterday’s efforts.
I posted this on the 70cms Fun Night thread and then realised this one would be more sensible.

I hope the evening ended well, John.
I could hear (but not copy (apart from CQ)) lots of CW exchanges, one of which was VERY loud. Then Phil, G4OBK, came up on ssb, clear as a bell 57 with a bit of QSB but not a squeak from G4YSS/P or anyone else. I did not stay long enough to see if I could work Adrian, G4AZS/P, as he was still on CW.
73,
Rod - in Hereford City

I managed to work Adrian on Top Band SSB but while I could hear John he was too weak under my high local noise level to call. Later on the band was pretty busy. Incidentally I could copy John OK on CW so I really need to work on my sending problem!

Managed to work Aidrian and John on SSB - low noise level here Brian, but Adrian - despite running lower power was significantly stronger - I might have been a bit close for the skip? Paul

ALL:
Thanks everybody for your efforts in working me last night or for listening and trying. I was quite pleased that I managed to qualify 160m but only just, needing two modes to do so. It was very gusty up there so the loading coils were going up and down a factor of two which causes QSB. It’s all a big compromise due to weight, particularly if doing UHF too. Hard work but that’s where the rewards come from.

Sorry not to have worked Rod and Brian but I realize about the noise levels. I hardly ever work from home.

The band should have been improving but instead it seemed to get worse. By the time we got to SSB, the reports on the S2S with Adrian were down from 599 both ways in CW to very poor indeed but what a rare thing was achieved. S2S’s on there are not common at all. The trouble with 160m in summer is that all PA’s and DL’s have mostly gone to bed. Sunset is later in the west too.

I got 15 on 70cm-SSB in 30 min net/ 1 hour gross. My UHF mast kept uprooting itself in shallow soil and I was set up on an edge. I swapped QTH’s to a much bigger (& safer for equipment loss) area for 160m but I still had to rugby tackle the sit-mat when packing up at 11pm. Got down to the car at 00:02. There was a little difficulty keeping to the path in crosswind. Enjoyed the evening and worked my son on the Yorkshire Wolds on 70cm. It’ll be a memorable one and I like Blencathra.

Hi Jimmy:
Roy and I talked about swapping the callsigns to me - his wish - but we never got around to it. I’m in touch with the family but I don’t want to push anything as they are still bereaved as am I. It may happen in future. Oddly I am constantly stumbling over my own call now. I’m not used to it at all. I only used it /M for the past 20 years or so.

Lazy day today. Not really - routes - reports - further planning etc.
Many thanks for the QSO’s, Phil’s response to my email and special thanks to Adrian for enabling that rare 160m S2S. I remember my first in 2004 but I’ve had very few since then. Report & photos eventually.

I consider myself lucky in having a choice of nearby SOTA summits, and having made a last minute decision to head out, it was a toss up between Longmynd G/WB-005 (accessible, but popular and possibly busy on a nice evening) and Corndon GW/MW-013 which is more of a climb, but a good VHF/UHF site.
Corndon won, and I placed an alert.
Moments later, I realised that I had no lightweight antenna system for 70cm, but at least it would be good exercise.
Then John @G4YSS mentioned Topband, and since I have a topband dipole and would be on the hill anyway, it seemed churlish not to try that too. I have only activated twice before on 160m, and in each case I took my 8m fishing pole, which is rather heavy, and only just high enough to keep the 80m long dipole clear of the ground - but I couldn’t carry that as well as the aluminium pole I use to support the 70cm Yagi. Time was running out, so I took my normal rucksack friendly 5m pole, and would think about how to use it when the time came…

It was a glorious evening to be out, sky larks singing, and indeed a small family of them were playing in the heather just a few metres from me - taking off and gliding back again. I’ve never seen so many together!

I was in time to catch the second half of the FMAC, working nine stations including S2S with M1EYP/P and G1ZAR/P.
Moving on to the UKAC, I managed 38 QSOs - M1EYP/P being the only S2S - and finishing at 21:30 local. Conditions didn’t seem good to me, noise levels were quite high, but I heard some high serial numbers being exchanged and I see from the claimed scores (on RSGB website) that some good DX was worked by others.

This gave me half an hour before our tentative sched to set up the 160m dipole, which proved to be just about enough. On arrival, I had paced 50m from the trig point to my operating position, as that would leave room for the dipole without having to move the “shack”.

I used the sturdy telescopic aluminium pole which had supported the 70cm Yagi, and - having removed the end cap - dropped the fibreglass fishing pole over the top section. This put the feed point of the 160m dipole at around 7m, just enough to keep it from sagging to the ground, with each end supported by a walking pole. The wire was running roughly East - West.

Having matched it with the Elecraft T1 tuner, I heard Phil G4OBK working John on CW, and soon after, we had completed the S2S with 599 both ways. FB!
G4OBK and GM0OPS followed into the log. Moving to SSB, it was good to work Brian G8ADD 58 / 44 and G4IPB 58 / 57. John then called me, and we did complete the QSO, but it was a struggle compared with CW earlier - 34 / 44. Sorry to have missed Rod M0JLA. With hindsight it might have been more helpful for me to start on SSB while John was on CW, and then move to CW later…

Anyway, a very enjoyable evening. Thanks to all who called or listened in hope, and to Tom and John for encouraging me up and out! 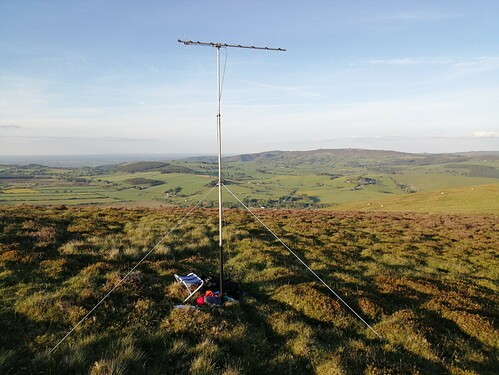 70cm the hard way! Photographed at home this telescopic rotatable mast is a nice bit of kit, but at 2Kg not ideal for SOTA. The “half a Tonna” is not ideal either, but we use what we have: 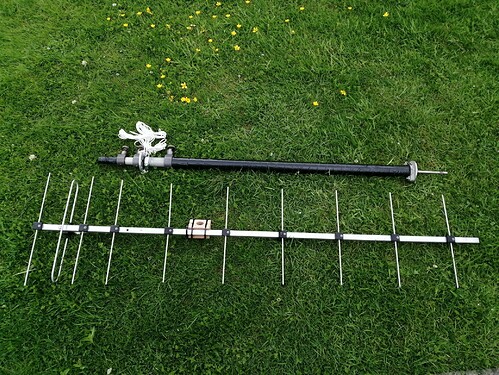 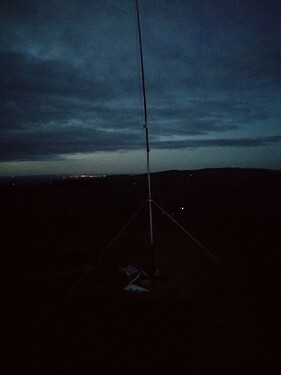 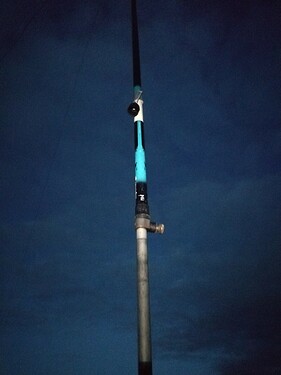 Magnificent effort Adrian and a very readable account. You must have carried more than I did and I thought that was enough. Your hill looks like a substantial climb too on the map. Great work and brilliant S2S on 160m. Many thanks for your efforts which paid off. Loads more 70cm QSO’s too to my 15!