Many thanks to Bill G4WSB for his kindness and help,without which this would never have happened.Together we activated Black mountain GW/SW 041 and Wentwood GW/SW 033.
A short Youtube video has been produced and can be viewed by following this link:

Also thanks to the many stations who put up with a newbie like me.
73 Sandy

Well done on the debut Sandy. You will be seeing plenty of the hills in the UK if you are teaming up with Bill!

Also thanks to the many stations who put up with a newbie like me.

This is without doubt a strength of the SOTA fraternity. Rather than “put up with”, new activators are welcomed enthusiastically, as young Edward M6NSR found yesterday - he was also doing his first SOTA. The same welcome is also given to experienced activators, but who might be doing their very first CW activation.

After our activation yesterday, we were invited to Edward M6NSR’s house for his 18th birthday party. His grandad Roy G1NUS was there. Roy was a membership secretary and long-time activator and chaser for WAB - Worked All Britain, and as such, remembers Bill G4WSB well!

In reply to M1EYP:
Tom,
Thanks for the warm welcome.Yes,Bill is very active and has plenty of free time unlike me!But I will do my best.I feel sure that Bill won’t mind me tagging along from time to time though!
73 Sandy G0VQW

many tnx for the fb qso and the excellent video.
Your operating does´nt looks like the one from a 1st time SOTA-activator.
Maybe you have been on Mount Everest as a radio-operator before

In reply to DF3MC:
Thanks Martin.Hope you had fun from DL/AM 104 Policemans hill!
Without the chasers it wouldn’t be so much fun!Ha hah
73 Sandy

In reply to G0VQW:
Fantastic video Sandy.
We look forward to many more activations. Thanks for the qso.
Good luck in 2011 and I hope to work you again as a chaser and maybe even a summit to summit.

In reply to DL4FDM:
Hi Fritz.Yes,Bill is a smooth operator on SSB but CW is my mode.Thanks for the nice comments.Wentwood was my second activation so I had honed my skills a bit by then and just replied with contest style exchanges,although by nature I am a ragchewer!
I would love to do Everest.Must have a word with Bill to see if he is up to it first!
73 Sandy

In reply to G4OOE:
OK Nick.I was pleased to work you.Bill G4WSB thought your name was Robert!Ha hah…I don’t know when I will be out next,but hopefully sooner rather than later.Always on CW and will make another video for Youtube.
73 Sandy 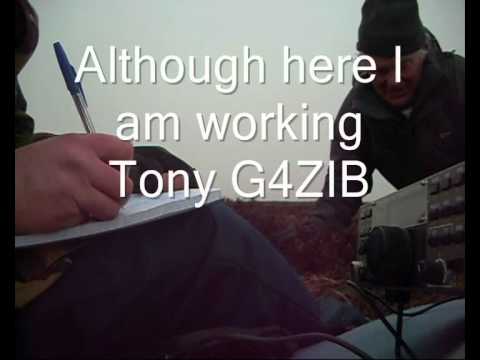