I would just like to say many congratulations to David G0EVV who achieved Mountain Goat today on the iconic summit of Ben Macdui GM/ES-001, the highest point of the Cairngorms. David has been chasing points recently activating many high point summits and I wondered what would be the summit.

Well done on the excellent achievement David. Conditions inter-UK were marginal and with signals in and out the noise I didn’t manage to work you on this one, but many thanks for all the points you have provided in the past on your way to MG.

I’d noticed you had been focused on the big ones over the last few months. Thanks for all the points on your journey to MG especially all the encouragement and contacts you gave me on my return to cw.

73 and welcome to the herd

Many thanks for all the points you have given me.

Many congratulations, David, and thanks for the contacts along the way. My log says 82 but some of those will be you chasing me instead. I hope for many more as you progress towards the next target.

Well done David, welcome to the herd. Shame we missed the S2S but good to work you on the way down. I hate to think how windy it was on ES-001 because we were having trouble standing on Mount Keen ES-014!

Congratulations David. It is always a pleasure to work you.

Congratulations David and well done on the MG.73 Don G0RQL.

Well done David on your Mountain Goat! Speaking as a chaser, you are always one of the most consistent signals on HF when operating from summits.

Well done David on your Mountain Goat always nice to work you.

Well done David, you are always a good CW signal on any band, thanks for all the points, including the trigs !!

The Peak of your activating & i’m sure well under way to your next. Congrats from the wild west of Wales.

Congratulations on attaining MG status David. Thanks for the many summits on the way and here’s to many more on your way to the next 1000

Many congratulations on reaching MG, - always
a pleasure working you.

Congratulations David for MG.
Thank you for so many activations and QSOs.
Today’s was hard work as it was tough for me copying your signal from GM/ES-002.
But we finally made it

Hi all,
Many thanks for your congratulations, I very much appreciate your kind words.
It has been a long journey, from humble beginnings on Place Fell G/LD-027 to Ben Macdui GM/ES-001. My first SOTA was actually activated as a Wainwright, with 4 Q’s on the 16th May 2012. On that activation I used a 2m IC92D that I had purchased to use on D Star. As I descended from Ben Macdui I worked Caroline MM3ZCB/P and MM1MAJ/P who were on GM/ES-014 using the same radio.

During the journey I branched out into HF and developed that further with a passion for CW. As many will know, I usually run 80W from an FT857 with 10Ah of Lipo battery. That gives me 2 hrs of operating time.

I am very fortunate to have had companions Chris and Colin, who have accompanied me on the more rigorous summits. On Tuesday, as Chris and I climbed Fiacalill a Choire Chais to reach the Cairngorm plateau, the wind picked up to a very blusterous 50-60mph, I began to think this was going to be the first SOTA summit I would failed to top out on, but as we reached the plateau the wind steadied, but remained strong, we pressed on and made the top. 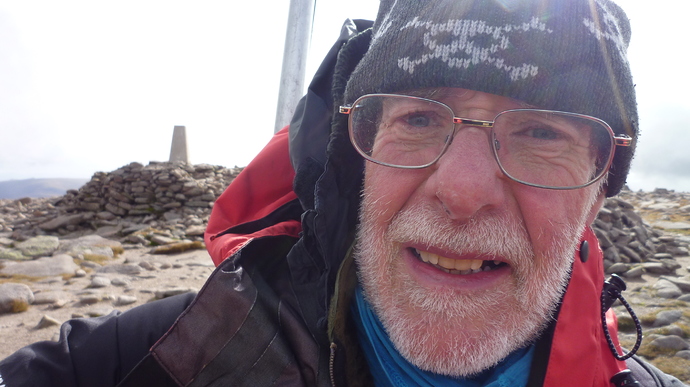 Thanks especially to all of the loyal chasers without whom this would not have been possible.

PS, When I returned home Mrs Stansfield had prepared for me a congratulations card, purchase a T shirt with an embroidered mountain goat and my shack was draped with “congratulations” banners.

Many congratulations David! It’s been a while since we spoke - sorry to have missed your MG activation. Well done! Hope to work you again in the near future.

Congratulations David from across the pond!