We were up early to make the most of limited daylight, but there was thick fog outside. The intially thick fog eased as we headed through the outskirts of Bournemouth and Poole on our way to Purbeck Hills, but as we left Corfe Castle and headed up towards Kingston the fog rapidly returned. By the time we were on the single track road to the parking at SY943793 visibility was down to less than 50 yards. Even so, there were two other vehicles in the rough and muddy car park as we drew up.

We headed out on a well defined path to across a field, which led to pleasant grassy area running along by a wall – we could see the wall and that the ground dropped away steeply to our left with a few gorse bushes, but that was all. At the point at which the wall headed away from the steep edge we bisected the angle between them, and before long the trig point appeared out of the fog with a wall beyond. Given the quietness of the summit we set up by the trig point, Caroline strapping the VHF dipole to the trig point, while Martyn set up further away from the trig to avoid the path running between the wall and the trig point. The fog was such that we couldn’t see the ends of the dipole from the trig! After a while some cyclists went by and we exchanged pleasantries about the lack of view. VHF conditions weren’t as good as the previous day, but Caroline still managed to qualify the hill on 2m FM while Martyn got 17 contacts on 5MHz. As usual we then swapped stations. Martyn managed just 2 2m SSB contacts, while Caroline picked up 26 on 7MHz including a S2S for both of us with Lutz DL3SBA. Having noticed a spot for Sylvia OE5YYN on 14MHz we dropped the antenna and changed the links: by now the fog had lifted enough that we could see what we were doing! We both grabbed the S2S and Martyn then worked OE5AUL who was with her, and we both then grabbed another S2S with LA5WNA. Martyn then handed the station back to Caroline who ended up with 25 14MHz contacts, ending with another S2S with S52CU. 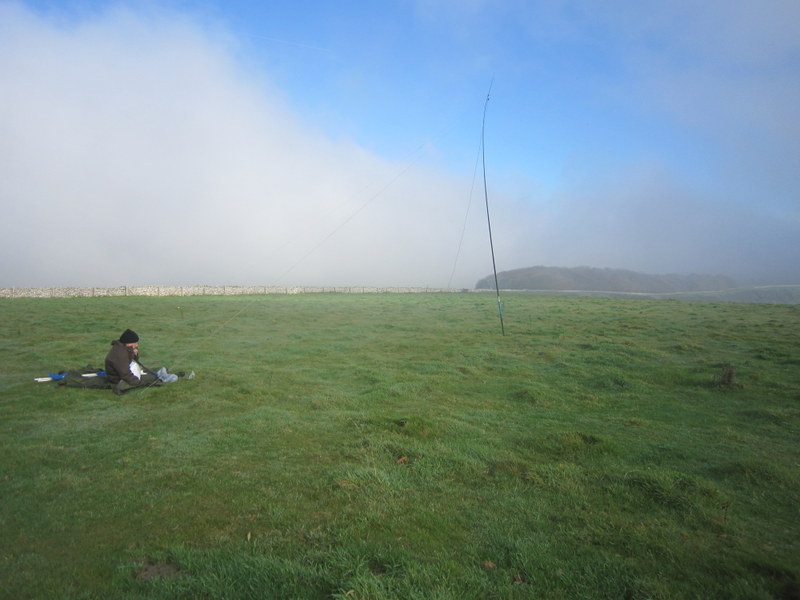 In the almost two hours we had been on the summit the fog had lifted enough for us to get some views – though it was still misty in the distance. This had revealed that the trig point wasn’t the highest point – there was a raised flattish area to the south. The summit had also got a lot busier, though most people weren’t staying long. We needed to get on to our second summit, but did a circuit of the summit area taking photos before retracing out steps to the now full car park. 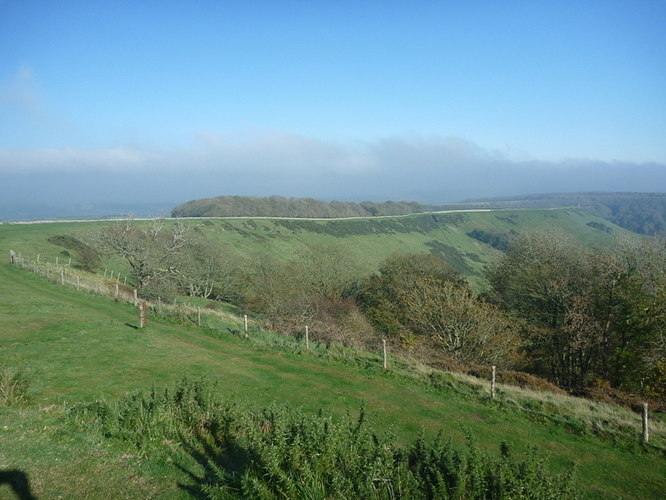 We then drove back through Corfe Castle and parked in the large layby at the north end of Ulwell at SZ020810. We crossed to road and took the narrow tree lined path along a fence before heading more steeply up Round Down. It was still misty, but we got good hazy views over Swanage Bay from the top, as well as of our target ahead. We then dropped back down to pick up the Purbeck Way path for a while. We then left it for an attractive grassy path heading up the spur, which gave more good views. However, we then had a rather awkward route over rough ground round the edge of the access area to drop back down to the Purbeck Way. We followed this as it made its way up to the summit, passing an antenna compound on our right, and the fallen trig point lying slightly down the hill on our left. The path over the summit was down a wide grassy path with fences either side.

There were quite a few people on the path, including some horse riders so we needed to find somewhere to set up not in the way. Caroline set up the VHF antenna using a fence post on the north side of the path, while Martyn set up the HF antenna by supporting the pole by lashing it to a fence post on the south side, running the antenna along the fence line. We had hoped that the mist might clear, but in practice the fog started to return soon after we got to the summit. Caroline had barely got set up when she heard Angel M0HDF calling from G/WD-009 Worcestershire Beacon, who was with Eva M0HJV, and we soon had two S2Ses each in the log. Caroline only managed another two 2m FM contacts before it went quiet, while Martyn got 13 contacts on 5MHz. The usual station swap produced just two 2m SSB contacts for Martyn, including Don G0RQL for the 5th time on this SOTA short break. 7MHz was again fruitful for Caroline – 29 contacts including a second S2S with Lutz DL3SBA and an S2S with MW0YCC on GW/MW-040 Carn Gafallt. We swapped stations again for Martyn to have a final run of 13 14MHz contacts including an S2S with LB1DH. 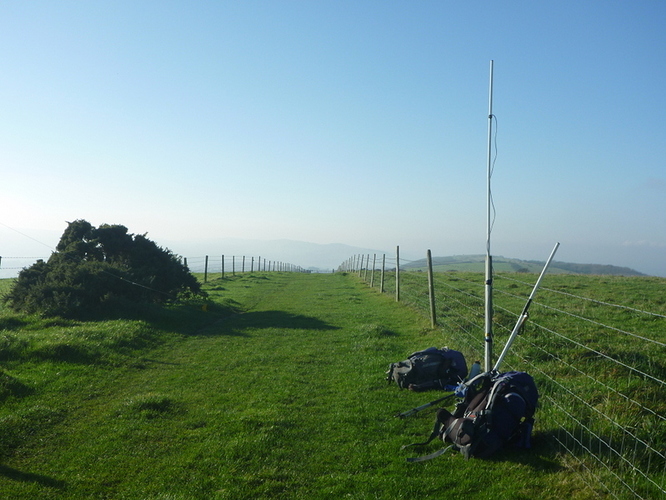 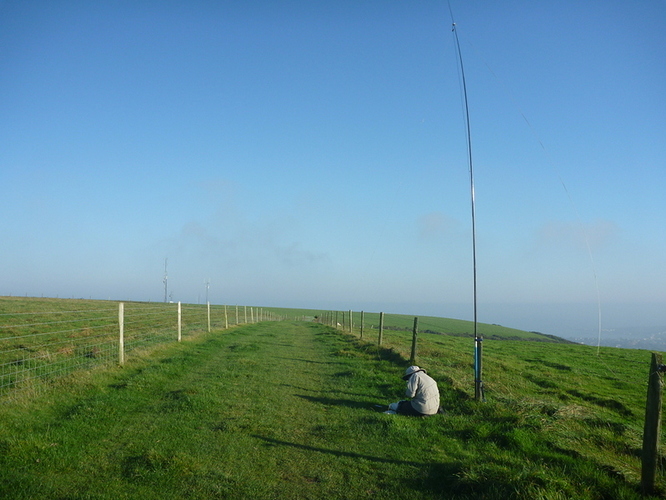 The fog was coming in again and we had lost sight of the coast, with fog in the valley to the south. Caroline heard a steam train running on the Swanage Railway, but the only visible sign of it was puffs of steam billowing through the fog. Dusk was falling as we packed up, but we were confident that we could return down the main Purbeck Way path to the road and then the short distance back down the road to the layby by head torch if needed. We made sufficient speed that we didn’t need the head torches, but had made the most of the daylight.