IMG_32204000×952 790 KB
with lots of blue sky and despite having lots of warm gear walked to the summit in a shirt. Walked possibly implies a path rather than pools of water, on the way up managed one boot full of water, on the way back both boots. I’m usually quite good at reading the vegetation to judge if it is floating, but these holes were more cunning than usual.

There are three walls to cross and I’ve mostly got stiles covered with the dog. I go first, get to the far side and call him over, however these had little gates at the top making it a bit more difficult. Anyway the result was that as the dog jumped off, the hand holding is lead and my walking poles accelerated sharply causing me to hit myself in the head with the walking poles.
The third stile was nearer a climb over the wall being both higher and with much smaller steps, and with a gate at the top. This involved lifting Woody to the top and then lowering using his harness.

I noticed an alert for Scafell Pike, and started the activation with a great S2S on 2m.

Having read other reports I had a go at setting up a tarp for a shelter. After 10 mins gave up, I need a bit more shock cord and practise. It did provide a bit of shelter but the noise of the flapping tarp made any communication impossible.

Set up on 80m. I’m afraid my report isn’t as detailled as John’s but i use an FT817Nd, set at 2.5w feeding an MX-P50M amplifier to produce about 30w ish into a full length linked dipole for 80/60/40. Power supply is a 4AH 4S1P LiPo with a buck converter to get to 12v. (I found one that doesn’t generate too much noise) I also have a speech compressor which can be switched in.

Called CQ and failed to spot and had a couple of QSO’s with stations getting excellent reports, and then put a spot out. Woody by this stage had settled down, got a coat on, eaten dog biscuits and was apparently content, this changed as soon as the pile up started, and the barking started. He normally does not bark, at home, at the postman, walking, sitting in the office / shack when I work, have a QSO, indeed the only way of getting him to bark seems to be to climb a hill with a radio. I put up with it for a bit and then deployed plan B, a filled bone. I did hear one station comment “His Antenna must have fallen down” but I was actually looking for dog treats. Woody is also my passport for hillwalking - no dog - no pass… lesson 1 - find the dog toys before spotting. A huge pile up then appeared - I didn’t realise that a pile up on 80m was “a thing” but it was. Lesson 2 do NOT start by asking for stations with a zero in the call. Almost everyone has a zero in the call…,. start at nine and work down!

After a bit more barking which was solved with a sausage roll… MY sausage roll I worked the pile up and then after a quick try on 2m headed down this time managing to go knee deep in hidden swamps with both feet.

Having carefully read the activation reports got back to the car to heat up a can of soup - which apparently is a key part of Tom’s activations before driving home. Woody was of course silent at this point.

Have decided to start a blog for the NP hills, as hopefully should complete them shortly, as I always find other peoples reports most useful… this might be an activity for Lockdown 2 - the sequel…

PS Woody is on a lead during the walk

PPS Only saw one other walker all day, but the A684 was full of Motorbikes.

PPPS Was thinking of SOTA summits within easy driving distance of Barnard Castle for Lockdown 2. Nine Standards Rigg particularly good as it is possible to test eyesight by counting Standards…

Thanks to all the chasers who put up with the erratic operating. 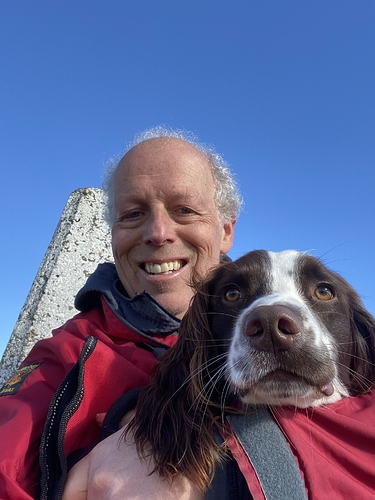 Nice one Paul . Was nice to speak to you and the doggy.
Best 73

When I did Aye Gill Pike it was on the way back from staying with Geoff G6MZX after the Blackpool Rally. He said “it’s a never ending walk” and he’s right. It does seem to go on and on. It was also very squishy. I didn’t get wet feet but it was a non-stop splish-splash-splosh.

Doesn’t look to bad in this photo… it was the tracks that were most bog-like! 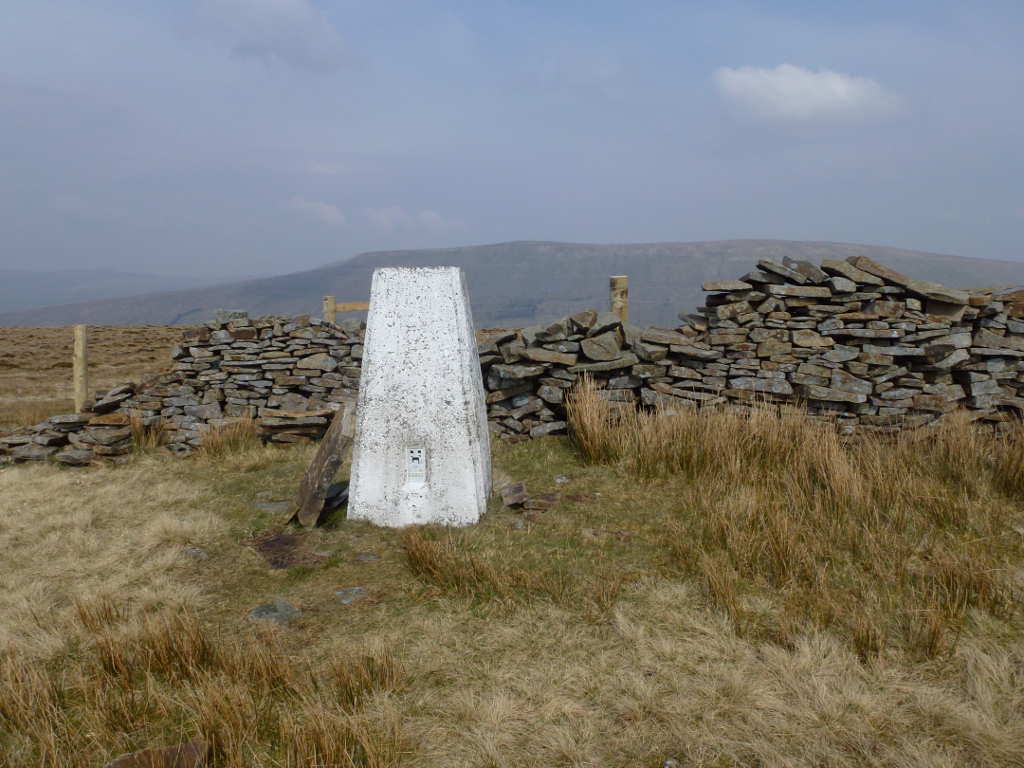 Many thanks for the report - it brought back some good memories. I well recall the floating vegetation - only surpassed by that on a route to Aran Fawddwy that John GW4BVE took me on which had even better disguised liquid ground. That was in the days when my boots were a cheap £30 pair bought locally which had zero resistance to damp conditions. Now I have at least two pairs that I can stand in streams in if the depth is not greater than the height of my boots.

As for the blog, I’m sure that it will be most welcome. I have written up all my activations and have them squirreled away in 10 large lever arch files ready for when I hang up my boots… whenever that may be.

Thanks for the report Paul and the complete.

Hi Paul,
Thanks for that. I needed a lift what with the potential of covid lockdown-2 and dealing with the consequences of a hacked email AGAIN! (I will be changing email addresses soon. Apologies to those who got the phishing spam).

Like Andy’s reports there was a lot of humour in yours. Human humour and doggy humour, though I’m certain Woody wouldn’t get it. Your experience was very similar to mine on Whernside last month. It’s very frustrating when you’re interrupted but haven’t time to tell the chasers why because you’re getting interrupted again. It’s especially true with CW. At least your dog was explaining himself over your microphone.

As for giving away your lunch item. Reward for bad behaviour. That’s definitely not criticism. I have done the same when it’s the last resort to save the activation or to stop having your mast ripped down. I am in a similar position. I feel that I should take the dog even though I know there could be trouble but they are such good company.

I think Tom’s post-SOTA soup-sessions have featured mulligatawny in the past and I finally got around to buying a tin last Sunday. Yes, Tom is right, it’s great stuff.

The comment ‘his antenna has fallen down.’ In this case not but it’s happened to me a handful of times and on one occasion I noted that the signal didn’t reduce by very much at all. Made me wonder why I carry a mast!

Rise Hill (Aye Gill Pike). If I remember right I was the first and after I read reports like yours and what Andy added, I’m not surprised it was unactivated for so long. I did it in the dark, fog and pouring rain by begging a mate who has land on that fell, to let me go from his house. Didn’t save that much but made me feel better. You will have gone up from the Langston Fell car park on the A684 no doubt.

Great photo of Dad and Mountain Mutt. Well done you two. You won’t have to do that one again! Let’s hope you (we all) won’t be curtailed but it’s worth planning what to do if you are.
73, John. 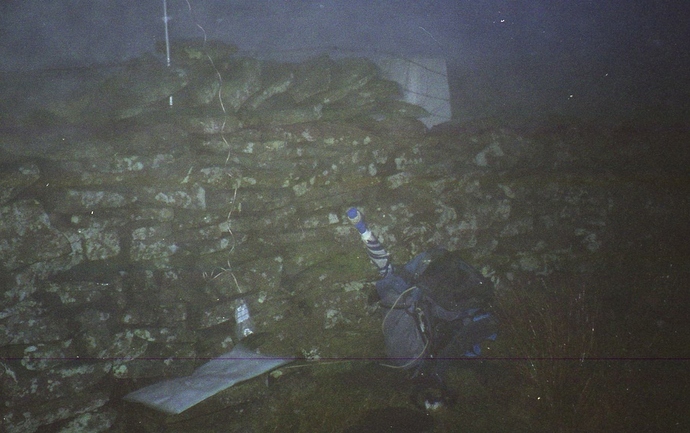 I think Tom’s post-SOTA soup-sessions have featured mulligatawny in the past and I finally got around to buying a tin last Sunday. Yes, Tom is right, it’s great stuff.

My favourite soup John - although I never take soup up summits these days, I only have it at home, unlike Tom and Paul…

Batten down the hatches and no socialising… here we go again…

Batten down the hatches

I had a unique for 2pts and another trek for a repeat 4pt summit lined up for last Sunday but there is a request from our glorious leader not to leave your health board’s area at present unless it is essential. (Applies to 5 worst affected health boards in the Central Belt) Now there is no way I can say that walking up hills and playing on the radio is essential, enjoyable nonsense but not essential. So instead of driving up towards Loch Tay, I stayed local. I probably met more people but TBH, it’s not the end of the world having to stay local. I’ve already done Tinto twice this Summer just for 13cms S2S QSOs and completes and if necessary, I’ll keep doing the local hills if that is what I am limited to doing and to hell with points etc. At least I can get out and play.

At least I can get out and play.

I’m pleased that my car has a Scottish registration. Now all I need is to perfect the accent and hopefully I won’t get the Scottish Inquisition when I next travel north. Me, I know nothing…