Having read Johns carefully and scientifically written report of perfect executions I have become aware that mine reads more like a lost episode of Hancocks half hour with a litany of forgotten lost or broken bits, impossible deadlines and children who believe thier father should be treated for this “SOTA” illness…

Well today it went surprisingly to plan, other than a late start. For once it seemed to work out well with the rest of the family indulging in retail therapy whilst I was in charge of dog minding, with some SOTA for good measure.

I downloaded and followed Phil, G4OBK’s route, and for the first time downloaded the route to my newish watch (Suunto Ambit Peak3) . I also had a map and compass… but found it surprisingly easy to follow the track by using the watch, although the constant tracking of distance remaining and altitude still to climb was a bit depressing at times. Underfoot it was quite damp, but I still had dry feet at the end so not a swamp.

Most of the climb was spent following Woody who seemed to stay remarkably well on the track. I have found that our Springer is the 4PD ( 4 Paw Drive) model with traction control, and a fully enabled GSM (Grouse Surveillance Mode) on by default. The combination of these propelled me up the hill with the occasional detour off the path as something interesting 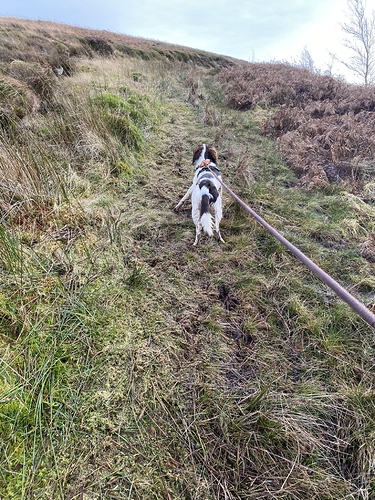 The Summit of Cold Fell 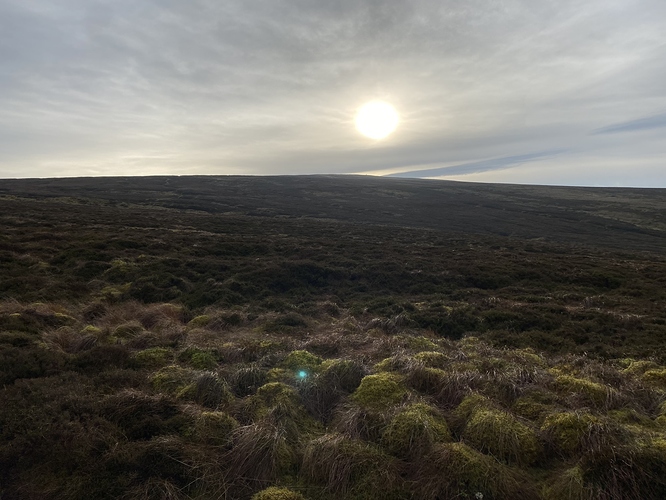 The summit was deserted so we took full advantage of the shelter. After feeding the dog (last of the turkey) and putting on his coat I set about assembling the station. 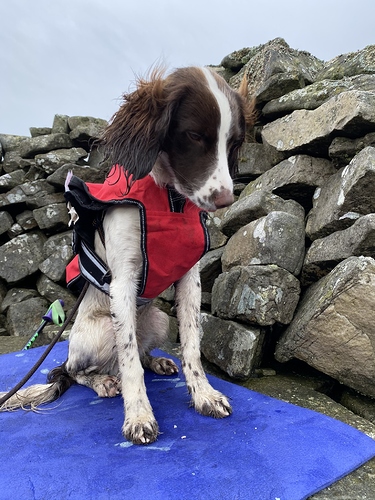 IMG_2368.JPEG1536×2048 988 KB
The antenna went up quite quickly (40/60/80 linked dipole but just stayed on 80 today) and after a quick check of the SWR with the FT 817’s meter ( 1:1) I turned the amplifier on (MX P50m) and driving it with 2.5 w which gives about 30 out I was off. Self spotting was a bit hit and miss - In the past I have always used Sota Goat but I know it is being updated so used Outd log instead - apologies for the accidental, repeated VLFspots - I will blame summit brain… Also did the logging using a portable keyboard, iphone and outd log which seemed to work reasonably well - possibly more of a faff on the summit but much easier back in the shack. 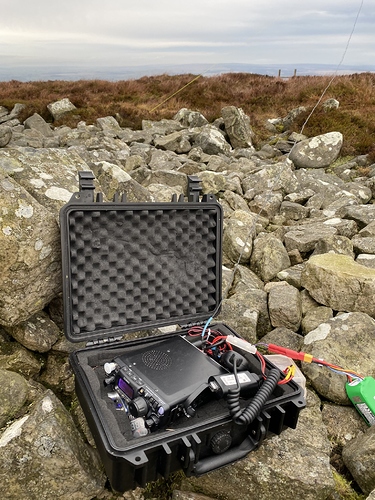 After two or three calls I found myself in the middle of a huge pile up - I did try to work everyone. there was almost no noise on the summit and almost all the calls were 59+

Just as I was finishing on 80m Woody decided that he needed a good bark, and other walker appeared. As I was starting to get a bit cold this seemed like a good opportunity to have a natter, a tidy up and descend.

The WX had been good, slightly windy at the start but not too bad at the top, and the view over the Solway Firth was quite good. 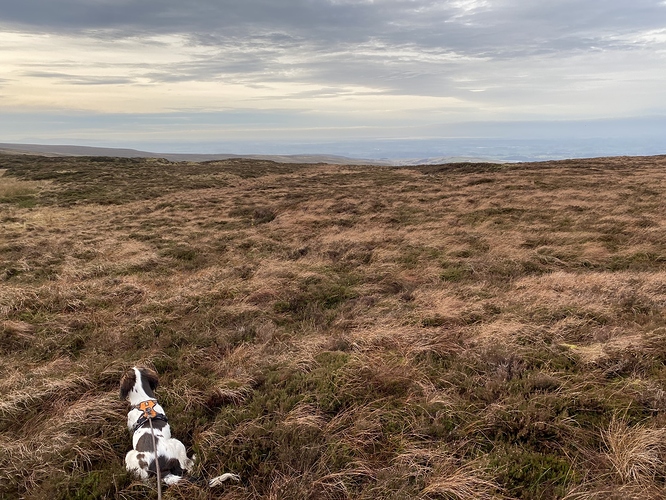 The drive from home was about an hour, about 1hr 30 up and an hour back down again with an hour on the summit in the middle.

I have a couple of 4Ah batterys (Turnigy Multi Star - according to the blurb lower weight but reduced max discharge rate) but only carried one up the fell which still had capacity at the end of the activation.

Finally the new boots - Altberg Kisdons continue to be warm, dry and comfortable, so unusually at the end of the activation as far as I know nothing broken, no tears or tantrums and a “Grand Day Out”, although if anyone has any advice on how to get the Springer out of traction mode into walking steadily I would love to know…

Paul … out to walk the dog!

Well done Paul. I’ve completely failed to activate any summits this Christmas period, and that dry spell looks to continue. Hopefully I’ll get one in before the end of the year, or maybe on New Year’s Day.

Paul, I think the dog will get less “pully” with age. However, if you get a dog as daft as a Spaniel, then you will always have a battle of wills to some extent!

I popped out for a quick 2m chase of Paul G(M)4MD and Gerald G(M)4OIG. Didn’t expect them to be too strong on 2m as a lot of summits in between us. But Gerald was 519 on 2m CW but vanished before I could call. I texted Paul but he had no reception till they were on the descent so didn’t get the message. I worked 6 QSOs, 5 on 2m FM and Robin GM7PKT/P on 2m SSB for a complete. So whilst I missed my complete with Paul&Gerald, I collected an unexpected complete with Robin and was his 4th QSO too. And… I also got a Brucie Bonus of a single activation point because I thought I’d done some complete chasing from my hill, Cairnpapple GM/SS-254, this year but it was actually last year.

You WX looks infinitely better than mine. Dry but very windy and murky for me. Off out tomorrow for another bash at complete chasing Paul & Gerald but I’ll have some HF with me and will be within ground wave range at about 15-20km from them.

Hi Paul,
Seeing Cold Fell again makes me want to activate it. It has one of the best summit shelters going. I know someone summit camped Cold Fell a few years ago.

I like the look of Woody and it’s a good name too. Tom Hanks would approve. Good to see a coat on him despite his long hair.

I see you use the same rig and amp as me. I like that combi and there’s a saving in weight of around half a kilo on my IC706-2G which is lightened. Neither are those two half as ‘juicy’ as a 100W rig, especially on receive and the lower settings of TX power (an 100W rig sucks in 5 or 6 Amps to produce 2 to 5W), so you save on battery weight too.

The 4xPaw problem. Yes as Andy states, Spaniel’s can be bad for this; great on the ascent however. My walking mate Will had one called Jess and they came with me on quite a few SOTA’s. Jess was the smaller version of Spaniel but she was still strong. I remember him being just about pulled over on a descent of Robinson, a steep grass section on the way back to Little Town.

One day we were doing LD6; LD14 and LD5 from Honister. I went ahead to get Pillar on the air, when we’d got along the Boat Hows path before Black Sail Pass. Will never turned up at Pillar. When I got back to Black Sail about 2 hours later, Jess had been missing most of that time. She’d pulled away and run off with an extender lead trailing. I eventually found her about 50m from the summit of Kirk Fell after a tip-off. As luck would have it a lone walker was leading her off towards me. She’s been up there with the lead caught in rocks and was missing for at least three hours! What luck to get her back! Will was talking of staying the night if we hadn’t found her.

Apart from your report i like the picture of Woody. My new SOTA dog Jack, has insisted on a similar coat as he shivers when laying down at the tops in winter. I’m now in the process of finding/making him a harness/dog rucksack as I’m afraid he’s going to have to carry his own equipment. Unless a dog lives outside most of the time many find summits in cold weather too cold. (I certainly do!).

he’s going to have to carry his own equipment.

Make sure you carry all the food and treats including his. Or he’ll go nuts trying to get his pack off and get the food. If he knows you have the food, he’ll stay close!