Started in thick fog in the valley on Fountains Fell, but popped out into lovely clear sunshine.

Unfortunately when setting up at the summit my linked dipole decided to break where one of the elements terminates at the centre. So 2M only it had to be… even that was a struggle for some reason. I got two great S2S with GW4VPX to GW/SW-001 Pen y Fan and Martin M7BIA/P to G/SP-004 Shining Tor, one more with GW4BML and then a mega struggle to get the 4th contact. Weird, as it is normally easy to qualify (and then some) those hills on 2m FM.

Descended back into the fog (seeing a fairly rare “fogbow”) and moved on to G/SP-006 White Fell. It’s a bit of a “bog trot”. Got to the summit with one wet foot and just an hour of daylight left. Decided to go straight to 40m SSB on the spare dipole I’d collected from the car. Well, I couldn’t empty the pile up after 50 minutes and I VERY reluctantly had to stop due to cold and advancing darkness! I’d got 69 contacts in that time!

Managed to snap some atmospheric shots as the sun went down.

More wet feet on the way back to the car… just made the car before I was forced to switch on the head torch. 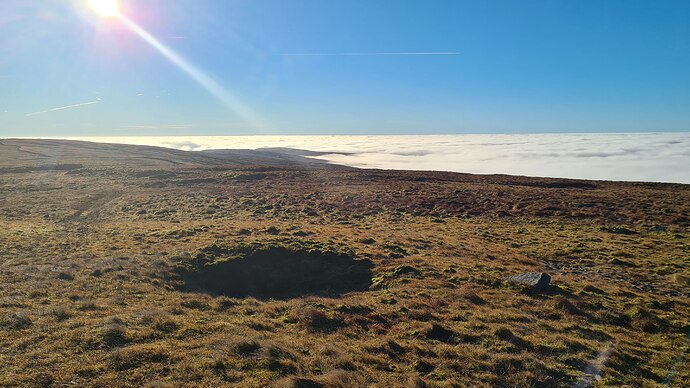 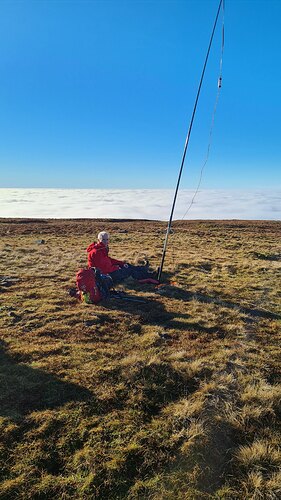 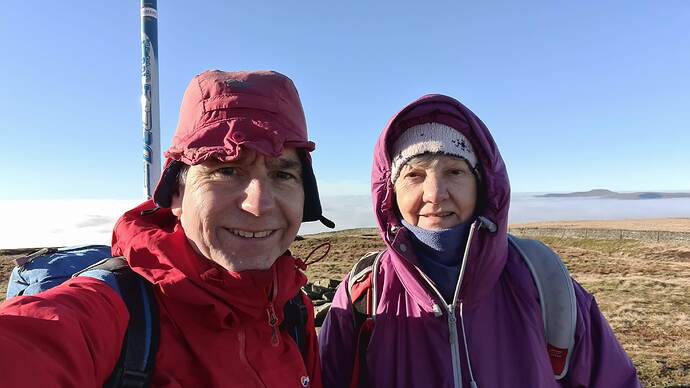 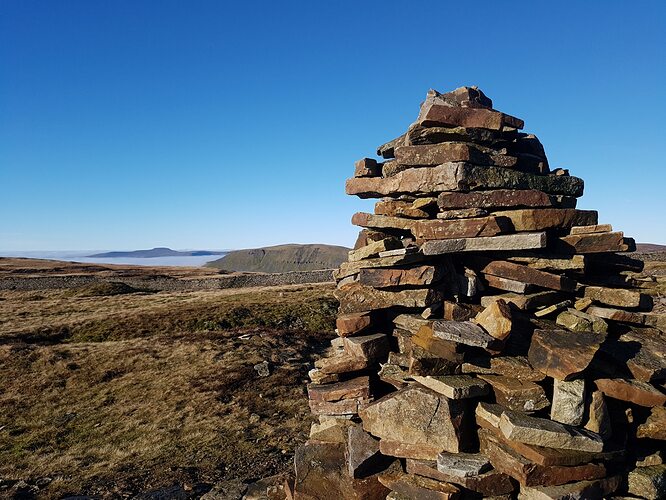 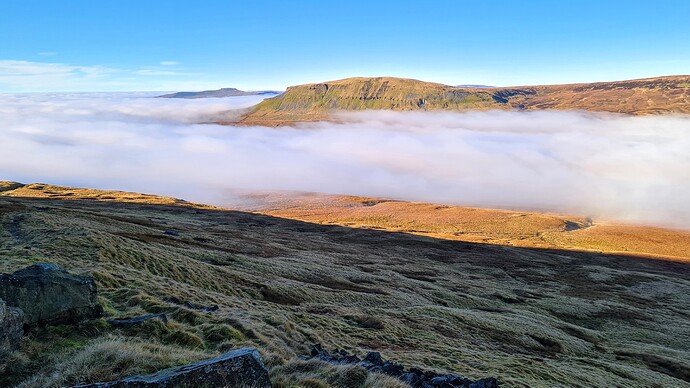 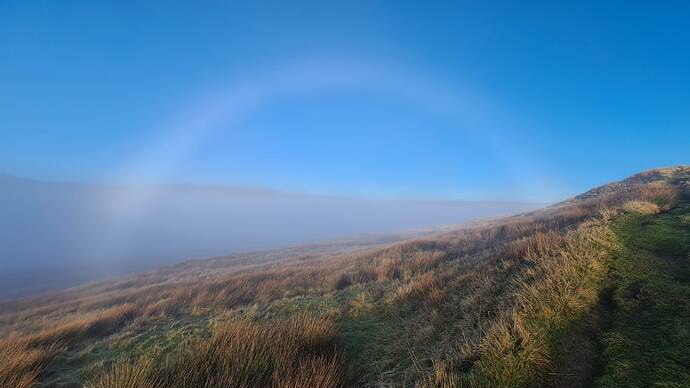 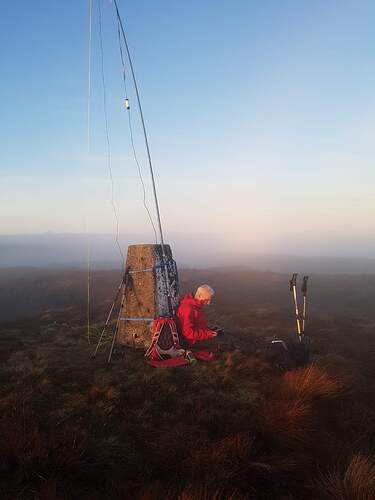 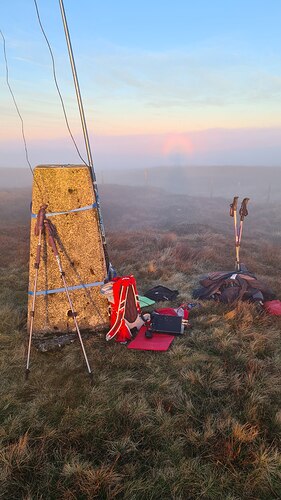 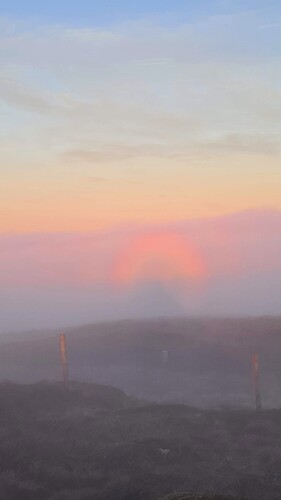 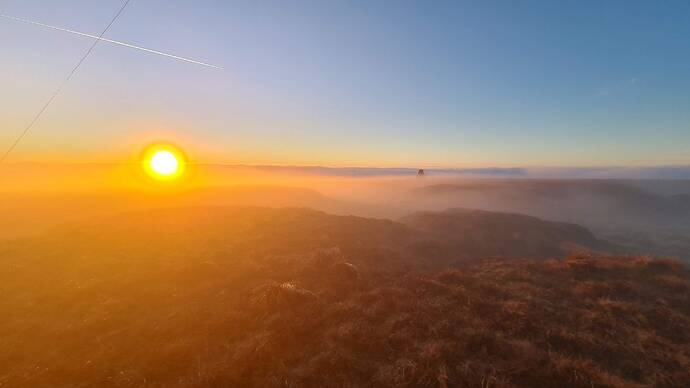 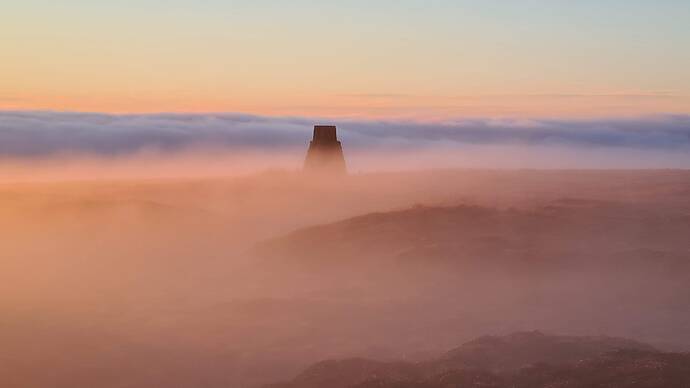 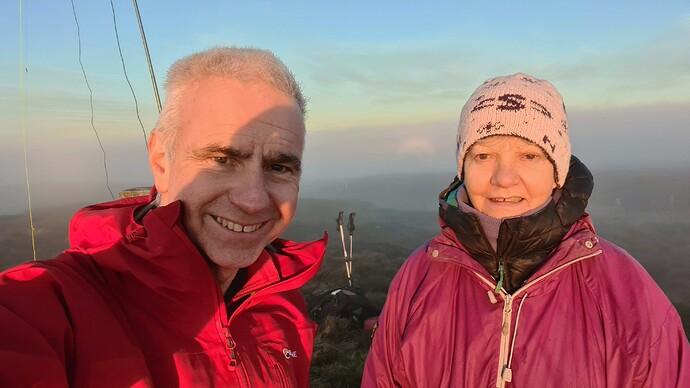 nice photo of you both.

Least I can do is take a pic of Sue… she puts up with a lot!

…but she does look a bit cold in that last picture! Hope you got down to somewhere warm (and found something warming!) as quick as possible. Lovely cloud pictures - especially at sunset. Look forward to the next instalment.
73 to you both. Viki M6BWA

When I saw SP-006 I wondered whether you’d risk taking Sue with you over such a bogfest. I’m sure it is best done in Wellies.

Many thanks for the great photos. Seeing a fog bow and a broken spectre on consecutive summits must be an exceptionally rare event.

Glad I could help out yesterday with an s2s. I hadn’t set up and was just using my handheld (164 miles) so a great contact although I was on a nice high summit😁. Nice photos of the views and of the both of you.

Great pictures!
I’m surprised you struggled on 2m. I was on Buckden Pike G/NP-009 and when I got to the top I switched on the handheld to listen out for you but perhaps you had finished by then. I went on 40m and 20m first and set up 2m FM at about 1300 and found propagation was well up thanks to the temperature inversion. I worked stations in Northern Ireland, Wales and southern England.
73 Richard

but she does look a bit cold in that last picture!

Hi Viki, we were both freezing at that point, the mist had settled and the last of the suns heat had gone. I was thinking of a quick 40m SSB, then 2m FM activation. After 50mins of working a continuous pile up on 40m I had to stop as my hands had stopped working properly and I’d given Sue my spare warm layer!

When I saw SP-006 I wondered whether you’d risk taking Sue with you over such a bogfest. I’m sure it is best done in Wellies.

Ha… I did warn her. Actually it could have been much worse. There were only a few really boggy patches. Unfortunately Sue did find a proper deep hole on the way down in the gloom… cue full foot immersion!
It’s a relatively short hill thankfully.
The sunset mist “views” made up for what is a pretty dull hill. I doubt I’ll be back!

I’m surprised you struggled on 2m.

It was very very odd. I was using the FT857 and a SlimG with 10W. I easily spoke to Martin on Shining Tor and I managed a 5/1 conversation with Allan to his hand held down on Pen y Fan. I then spoke to Ben in Mid Wales at his home QTH. I got one local contacts but it was a struggle. Then… nothing… I called for 10 mins and no one came back.
The chap I spoke to locally suggested it might be a problem with the inversion, with my signal failing to get “down” below the layer to the local stations… I don’t know if that effect is strong enough to block me out completely. Anyway, interesting idea.

I think I spoke to most of the regular local chasers in Skipton, Leeds, Barnoldswick in between contacts to Wales, Shropshire, Leicester so I don’t think the inversion was blocking signals. Signal reports on the local stations were sometimes a bit higher than they were the day before (although most are usually 59 both ways). Did you scan round the band to see if you could hear stations? I found lots of QSOs, both SOTA and rag chews.

Did you scan round the band to see if you could hear stations?

Yeah, I did find several stations in conversation. I did think of breaking in and asking for a report to see if something was broken. Anyway, I’ll do a bit of testing before I take that radio combination out again.
What made me think it must be OK was the 3 distant QSOs I had managed initially, Odd… but that’s the joy of the hobby, you never quite know what you will get.
Like thinking I’ll do a quick 40M SSB activation on White Hill and then getting battered with an undrainable 50 minute pile up which needed huge concentration to pick out partial call signs. I don’t know what was going on with that. I seemed to be getting loads of German and Swiss Club call signs coming back. Maybe I unwittingly ended up part of some sort of event??

If you hadn’t said you’d worked into Wales I would have assumed that the lift didn’t start until after you finished. The valley fog certainly increased during the day. As you say the joy of radio.

I had this problem with my linked dipole on a recent activation only it was one of the croc clips on the links that had broken off. I used my teeth as a wire stripper and was able to hand-wrap the link. If only I wasn’t so lazy and preemptively checked and re soldered the connections periodically.

it was one of the croc clips on the links that had broken off.

Yeah, they are a bit easier to temp fix as they don’t have any tension on them.

I did think of fiddling with it on the summit, but hands were cold, I’d forgotten my reading glasses and I was on a “schedule” to get White Hill in before dark as well.

Job for tomorrow when I’m going to be at home most of the day.

That’s game over for me now. I carry a very old pair of varifocals always in the radio bag. They do lack some “gain” for reading but at least the close up stuff is in focus with them even if is a wee bit small!

Fantastic photos, looks like a few folk have had the benefit of inversions in the UK recently, certainly makes for some amazing photo opportunities. Congrats on the pileup, doubt if it felt like 50 mins!

Unfortunately when setting up at the summit my linked dipole decided to break where one of the elements terminates at the centre.

I have had this problem several times so have a spare in the car (along with batteries etc) when more than one hill is planned. After some recent trouble I began the activation of GW/SW-002 with a quick check - and found that the centre connector of the BNC socket was loose in the “chocolate block” dipole centre. I was relieved to find my small screwdriver in a side-pocket and so was able to tighten the connection. The other three screws were all found to be loose

and got the same treatment. How does this come about in only a few weeks since the last thorough check in the shack? I have not got around to checking it again so hope all is well for 16th.
I am now considering the practicalities of a drop of Loctite on the threads.
73,
Rod

How does this come about in only a few weeks

Have you got the ends of the wires going into the chocolate block tinned? That can exacerbate the loosening as the solder can deform under stress.

Thanks for the thoughts, Andy. I did wonder about vibration - it has had a bit of a bashing from the wind recently. I will try to remember to check again today.
73,
Rod