Great Shunner Fell was my first activation - well sort of but as I only managed 3 contacts I was so dejected that I didn’t submit the log. On that occasion I think I moaned about not getting any contacts on 2m. Since then I have never not qualified a summit - but I have got the hang of spotting.
Knowing what HF has been like for the last couple of days I started on 2m, and the band seemed to be in a time warp, so much so that it was quite hard to find an empty frequency. I presume conditions were good but for 11AM on a Tuesday morning I was very impressed and easily qualified the summit.
The same could not be said about my attempts on HF, indeed I was wondering if I had an antenna fault as all that there seemed to be across 40m and 20m was noise with the odd QRO station emerging from the noise, occasionally. A couple of CQ calls later, and an attempt to get a S2S ended with failure. Looking at Solar Ham I notice that the Kp index is 5 which I think is a minor geomagnetic storm explaining my relative failure on HF.
(VHF equipment FT-270 into a Jpole at about 5m. HF Equipment a KX2 (Yes I’m keeping it) into a 40m EFHW)

Once again thanks to the chasers, apologies for my barking sidekick (Woody) 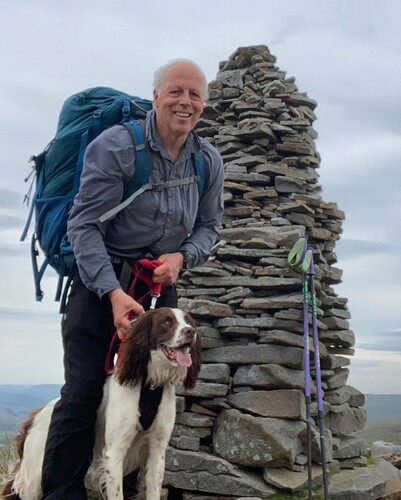 I was so dejected that I didn’t submit the log

My first two activations had one contact each so no points. The first was my local summit Rombalds Moor G/NP-028 so it wasn’t a big deal but the second was Scafell Pike G/LD-001 so that was 10 points I didn’t get. Both were with a handheld so not that surprising. But I still uploaded them so they counted as activations.

Since then I have never not qualified a summit

I was out recently in similar conditions but still managed plenty of HF contacts. There was clearly sporadic E about, even on 20m, which may not be affected by geomagnetic conditions (?). The higher bands can work here too. This was all on CW which probably helped a lot compared to SSB.

Sorry I missed you for a S2S today, I arrived at Holyhead Mountain (GW/NW-069) at about 11 but the weather was awful (thick fog, rain and humid) and the paths so overgrowm I really should have brought a machete rather than walking poles (one which I managed to break hacking at the bracken).

2m is a very fine first string to the bow in England.

. This was all on CW

CW has a big advantage in iffy conditions - I still don’t enjoy using it but perhaps in the future needs must!

I notice that the Kp index is 5 which I think is a minor geomagnetic storm explaining my relative failure on HF.

I’m not a propagation expert but I believe a mid-to-high K value mainly affects the lower HF bands like 40m. The SFI was okay this morning (~160) so I wonder if you would have been better off on 20m or higher frequency.