Rob, just out of interest, could you plot a profile with earth curvature between the following two locations please?

According to the Solwise tool this is line of sight but I’ve never been able to chase someone on Snowdon on 2m from that location (it is 5 mins from my QTH and the highest spot I can get to quickly). I suspect your tool will show something very different. 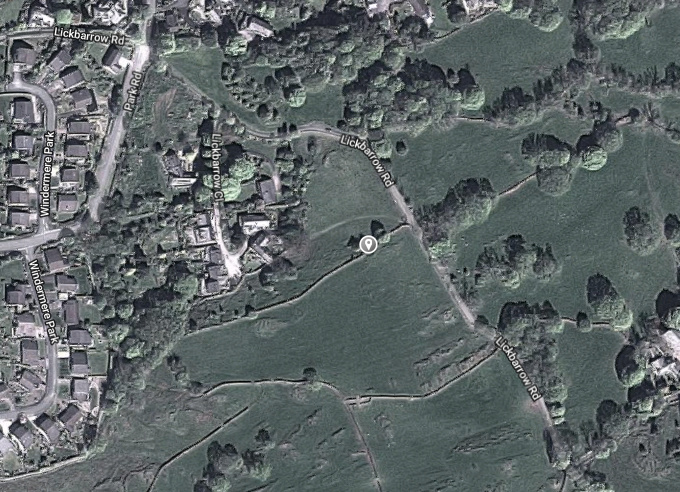 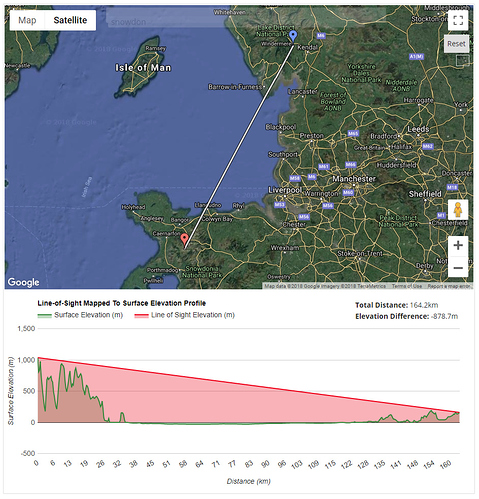 OK, it’s the other way round, since I took your address first, but no matter: as near as I could get it, here’s the flat earth version: 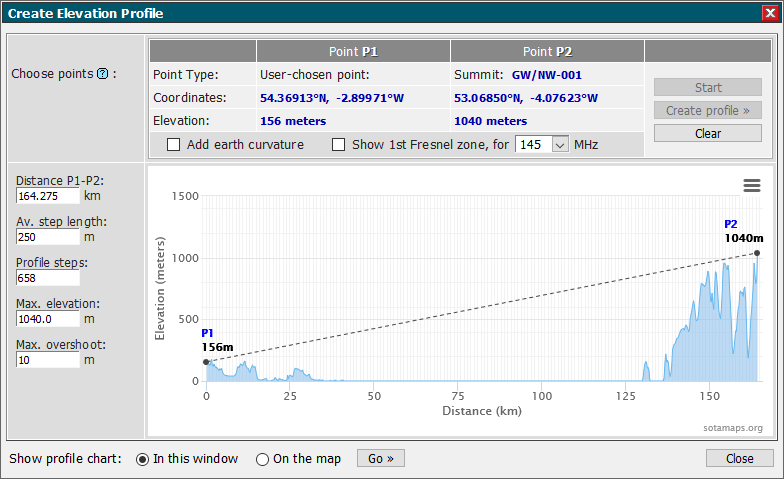 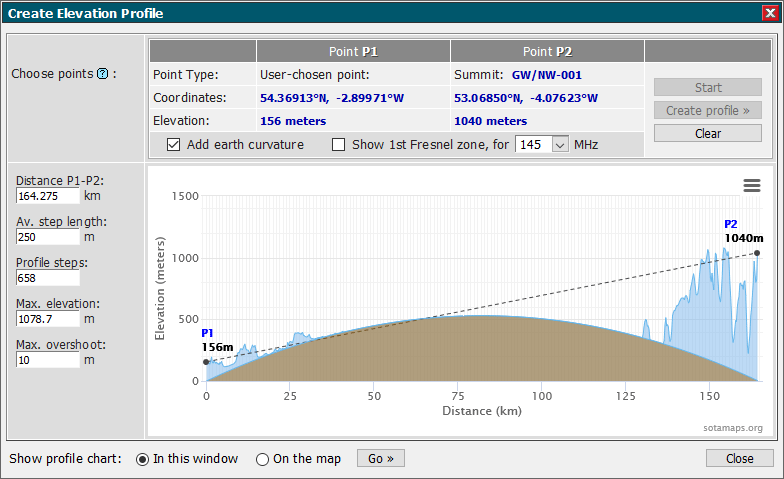 …and with 1st Fresnel zone for 2 meters: 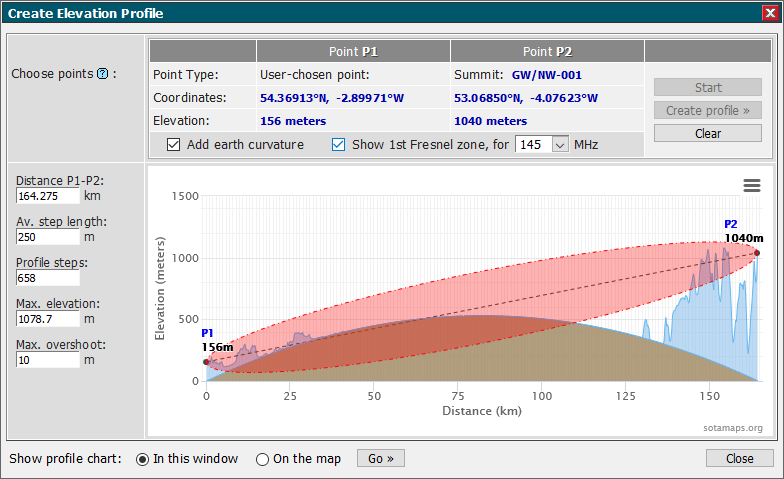 So, as I understand it,

The first zone must be kept largely free from obstructions to avoid interfering with the radio reception. However, some obstruction of the Fresnel zones can often be tolerated. As a rule of thumb, the maximum obstruction allowable is 40%, but the recommended obstruction is 20% or less. (Wikipedia)

So, you’re in for a bit of a struggle there… EDIT - BUT, see below…

I believe his name was Duncan…

That path should be fairly easy to work via normal troposcatter on 2m SSB with smallish Yagis at both ends. But simple verticals and FM may make it really difficult. You would need to get the antennas clear of the ground, say 3-4m. Positioning the Snowdown end on the edge of any sharp drops would help. Mark’s QTH looks rubbish with lots of vegetation and no obvious ground gain to be had. Getting the antenna well clear should produce a big improvement.

Should be (for various definitions of should be) possible with a bit of antenna choice and planning. Very dodgy for someone running up to the local high spot with a handy though.

That path should be fairly easy to work via normal troposcatter on 2m SSB with smallish Yagis at both ends.

Right - this is some of the stuff I’m largely unaware/ignorant of, so it’s good to hear from somebody with experience in these matters.

(Hopefully not teaching you to suck eggs here Rob)

Troposcatter is available nearly all the time at VHF and is the normally mode used for paths beyond LOS. Typically there will be a volume of troposphere a few km above ground that both stations can see and dirt/moisture/stuff in that volume of atmosphere will scatter some RF. You need a directional antenna, some watts and a decent sensitivity which can discount FM and rubber ducks in many cases and makes SSB a better choice.

Tropoducting is when you get layers of air at a different temperature trapped between other layers. This is when you get significant long range propagation at VHF and up. Typically as a result of prolonged periods of high pressure starting to decline. To benefit, antennas needs to see the duct opening at both ends and can result in 1000’s of km of propagation. Moving height only a small amount or position a few kms can result in the duct not being visible. ISTR reading the duct depth needs to be 10-20 wavelengths high to work. So quite deep for 2m and that requires more extreme conditions that for higher bands where small ducts form more easily and ducting on 6m is much less common. Ducts form all the time over long water paths and cause havoc to commercial links, they normally need to have multiple antennas and different heights (maybe one antenna 50m higher than the other) and use automatic antenna diversity to maintain comms as the ducts form and break up.

So, I guess you measure this with a duct tape?

Well, your image is amazing Rob and quite succinctly explains why I never had a hope of getting a contact!

So now we have hills at both ends and a bit of ocean to get through. I do have a delta quad antenna that works well which does a good job of sucking a signal in but I’m guessing that the average activator of Snowdon is going to be either on a handheld of a vertical roll-up of some description.

I’m quite staggered that the curvature is that much mind. Well, I’m really looking forward to the tool being available, it’ll be great to have a play and work away from my QTH to find somewhere suitable.

I’m quite staggered that the curvature is that much mind.

Well, let’s not forget that the vertical scale on those diagrams is much exaggerated. The actuall bulge/curvature is just under 530 meters over the distance of 160-odd kilometers. Here’s another view of that:

where the vertical scale is less exaggerated.

So, you’re going to have to factor in this tropo stuff as Andy suggests, and with a couple of decent antennas at both ends, and a bit of extra height (try some Gary Glitter platforms - I’m sure Tom @M1EYP could loan you a pair), you should manage the link OK.

Oh I love the baiting there

As it happens, to go full circle, I heard Tom when coming down from Red Screes - a small world eh? He even returned my callsign, but was mobile on the M6/M55 and couldn’t hear me again.

Your images remind me of the Father Ted Cow sketch… where I am doing a great Dougal impression!

I think the solution is obvious - pick one big hill round here and get a S2S instead. I’ll bet there are no issues once I’m up Coniston Old Man. Maybe I can borrow his shoes as well…

Looks like the model needs a bit of work. k should be 4/3, not 1. http://www.mike-willis.com/Tutorial/PF6.htm

I’m showing the real bulge/curvature of the earth over the distance, and an absolutely straight line (i.e. a Euclidean straight line, not a GR geodesic) between points - no refraction taken into account. It may not be as relevant to radio as the example you give, but it is what it is, and the thing is still in development as I scribble.

With just a little work, I could also include any number of k factors (Special K only for those with accounts and deep pockets)…

Ah, I think I see what you mean by your masterfully concise sentence - is it that the Fresnel zone ellipsoid should be arranged around a curved path, with curvature determined by the factor k, rather than along my straight line? That would seem sensible. Time to build in a k-factor dropdown just like how them pro’s do.

OK, so the program now includes various k factors, including 1.333, as options in a dropdown. Thanks for pointing out that this has to be taken into consideration. Here’s how that path between Windermere and Snowdon GW/NW-001 looks now: 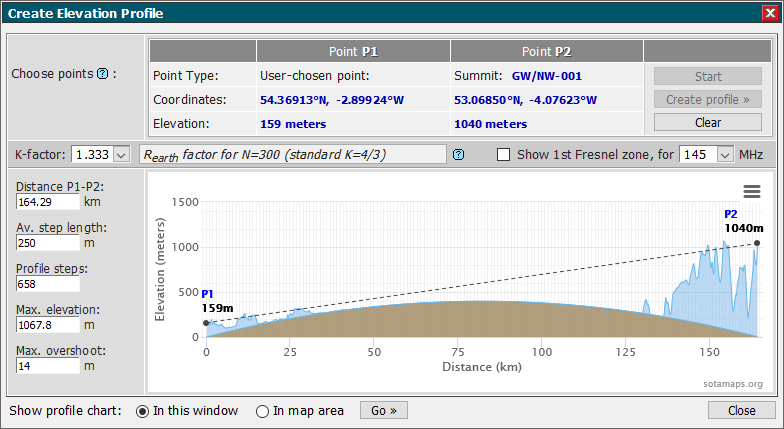 I read the article that G3CWI linked to yesterday, but didn’t pick up on the K factor until I read it again today.

If I understand correctly the K factor allows you to draw straight line propagation paths between points, rather than the actual curved path due to refraction, by fudging the Earth’s radius a bit so it is flatter than reality? I think I understand that K won’t change other than where you are on the Earth’s surface, presumably because the Earth isn’t quite round?

It also means we are back to the possibility that there does exist a path between here and Snowdon. I need to start looking at the Welsh alerts again, clearly

If I understand correctly the K factor allows you to draw straight line propagation paths between points, rather than the actual curved path due to refraction, by fudging the Earth’s radius a bit so it is flatter than reality?

That’s about the long and the short of it: RF engineering firms use these factors when considering things like microwave paths between stations. There’s quite a lot of references and literature on the subject, some going into quite a lot of technical detail.

Basically, these k-factors are used in order to simplify the graphical representation of a signal as it propagates through regions of the atmosphere having slightly different refractive indexes. These refractive indexes depend variously on atmospheric pressure, CO2 and water-vapour content, and hence on elevation and weather conditions. So, it turns out that most RF engineers tend to use just two or three standard K-factors when designing microwave systems, instead of analyzing the atmospheric conditions on the day and making complex calculations.

So, it’s rather more than the “tinker’s fudge” I thought it was when I retired last night, but I think we’ve got it covered now…

Did you not read the bit about troposcatter a few posts back? The answer to your question is yes but you’ll not do it without directional antennas.

The answer to [the] question is yes but you’ll not do it without directional antennas.

I’m OK on the troposcatter as you explained it earlier - what about Es, sporadic E? Which of those is most important in getting a 2-meter signal from GB to Spain, for instance?

what about Es, sporadic E? Which of those is most important in getting a 2-meter signal from GB to Spain, for instance?

When there is an Es opening to Spain (perhaps several or more times a year) signals can be phenomenally strong. I’ve never heard a strong tropo signal from Spain though others have been more fortunate.