I’m still putting every possible effort into attaining Mountain Goat. Yesterday was all about cashing in on some Winter Bonus points.

We had snow on Friday at home, so I thought that my chances for an activation was low, however looking at the forecasts, it was to appear that 6th March would be a fine day. Weather reports from Helvellyn G/LD-003 suggested that the snow could be dealt with.

I left home a bit before 6am, I stopped off for a quick breakfast before arriving at Kirkstone Pass car park at around 8am. I had thought long and hard about the sequence to do the summits in, I wanted to do High Street G/LD-011 first really as that summit is the furthest distance from the car park. I also thought it would all too easy to get back to the car after High Street G/LD-011 and Stony Cove Pike G/LD-018 and think, nah, I can’t be bothered to do another hill!

So, I made the decision to do Red Screes LD-017 first, the car park is literally right at the base of the hill and it’s a straightforward, steep and short climb. Doing this hill first gave me a chance to assess the conditions underfoot in order for me to decide whether to continue to High Street after Stony Cove Pike.

The snow was quite deep in places but mostly firm so I summited without much trouble. I had taken my 2 band MTR and lightweight dipole designed for a 4m pole. I had obtained a new 2S 460mAh LiPo to power my rig weighing 33g, I did as much weight saving as I could as I knew it would be a long, hard day.

I worked more chasers than I expected on 20m. My time was short so I just concentrated on getting calls in the log without too many pleasantries. I struggled to find a clear frequency on 30m, there must have been a rare station working split as there were callers spread out over a few kHz. I made the decision to not bother with 30m, the activation points had already been earned.

After packing up, I realised I had a good 4G phone signal so I tried a video call with my wife. The call worked very well and my wife was amazed by the scenery!

On my way back down, I went through the snow at one point ending up knee deep in a bog, thankfully, I had packed spare boots, spare socks and spare walking trousers into the car for suvh an event.

Upon reaching the car, I changed into my spare gear and headed off towards Stony Cove Pike G/LD-018. The route to High Street is a long walk that involves lots of ups and downs and takes in Stony Cove Pike on the way. I reached Stony Cove Pike by 1200, I was hungry and tired so I decided to take a lunch break. I felt much better after the food and rest and as I was actually at the summit, I thought I may as well do the activation then, rather than on the way back as I had originally intended. I hadn’t set any SOTAwatch alert, so there wasn’t a timings issue. I put up the 20m/30m dipole and again using the MTR and new 2S LiPo, I called on 14.061. I was shortly spotted by Lars, SA4BLM who took great care to confirm my SOTA ref - bravo Lars, great operating! Again, I dispensed with pleasantries as time was short, trying to get the calls in the log as quickly as I could.

High Street G/LD-011 looks deceptively close to Stony Cove Pike G/LD-018 but there is a substantial hill in between which must be tackled, going past Thornthwaite Beacon.

The walk to High Street seemed to take an age! Again using the MTR but this time with my spare 3S LiPo (35g), I called on 14.061. Business was slow at first but again, I was carefully spotted by Lars SA4BLM at 1509. I was feeling tired and my brain was fried by the CW but I muddled through as best as I could. I was very surprised to be called by Fred KT5X in New Mexico and in the excitement I managed to mangle his call - I knew what I meant! Working NM with a dipole at 12ft - how does that work?

The long walk back to the car took the best part of 2½ hours, getting to the car park at dead on 1800. I arrived home after the 70 mile drive at 2000, shattered, aching but happy to have 29 activator points in the bag bringing my total to 910pts. 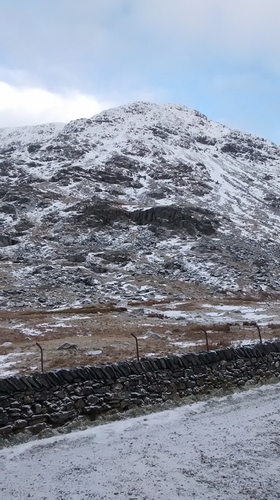 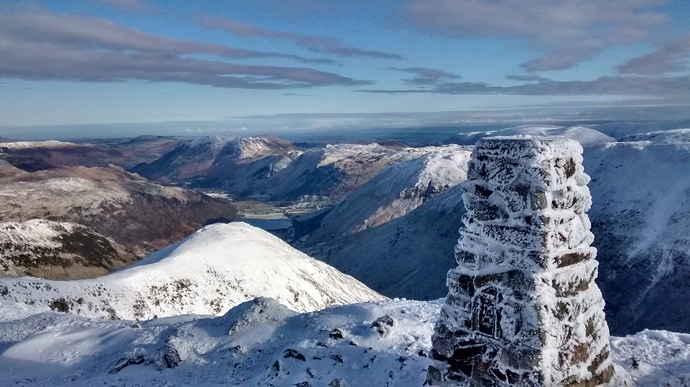 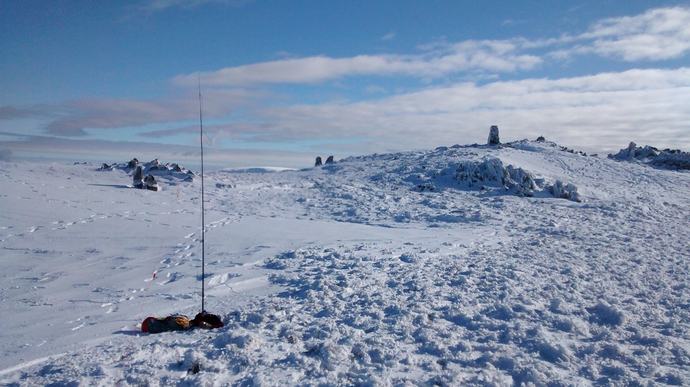 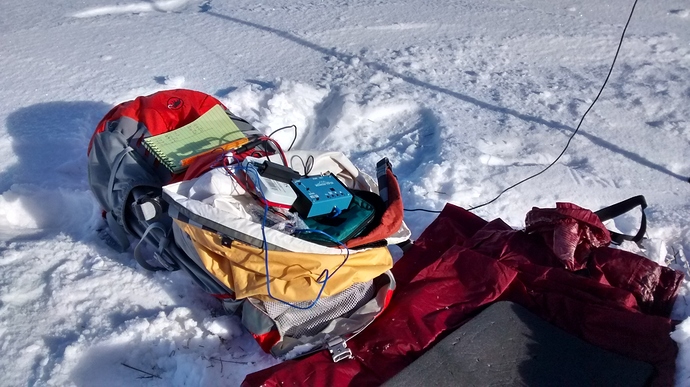 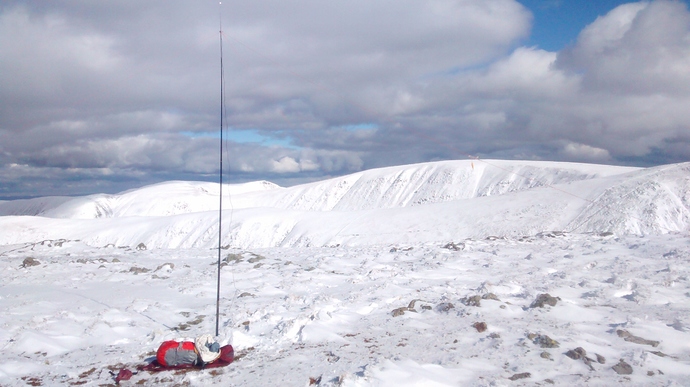 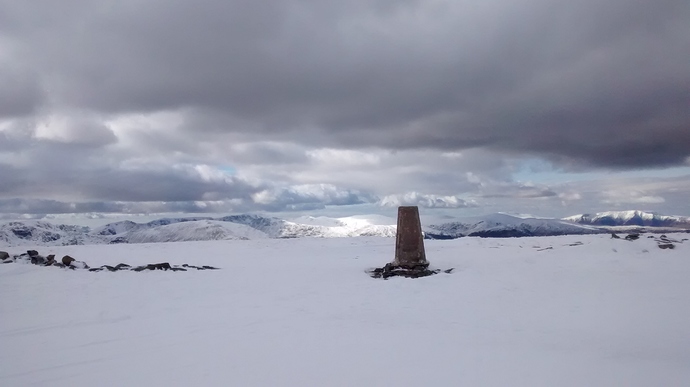 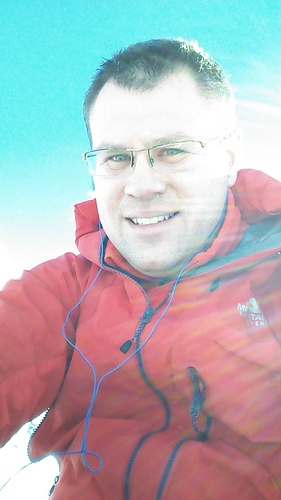 Sun starting to go down 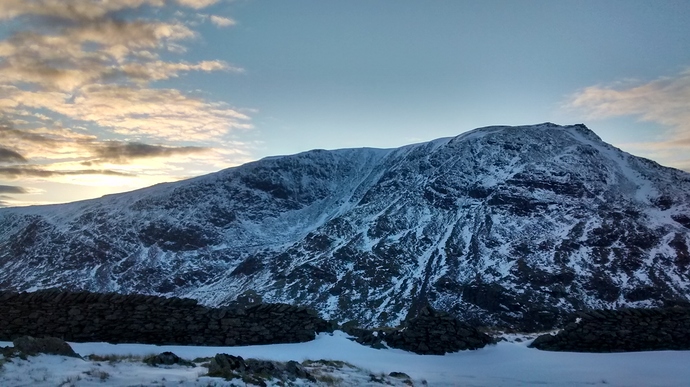 Light fading as I approach the car park. 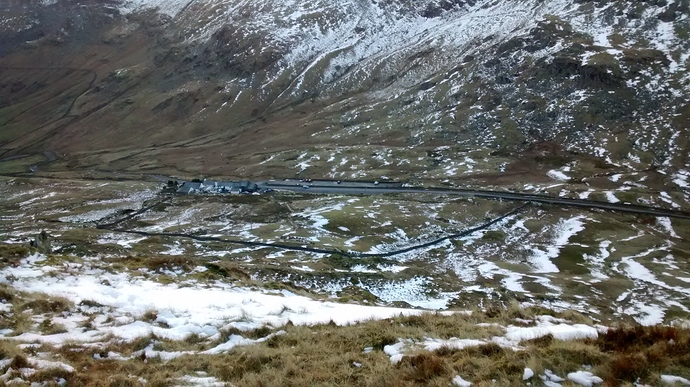 excellent pics and good wx by the looks of it.

Some great views of Lakeland!

GL in your quest for MG.

congratulation on your succesful multiple activation. The path towards MG is not long now and certificate is at sight…!
I am glad the weather was fine for you, impressive pictures.

I’m happy I could work you on the first two summits, and surprised to see you used the 2S Lipos. Good signals here out of your nice MTR running abt 2-3 watts, I guess. Excellent and efficient system you settled indeed.

The pile up in your freq was such a big I was afraid you wouldn’t hear me but your operating was great. Thanks for nice report and take care on hills.
72 de Ignacio.

Thanks Nick, my aim is to achieve Mountain Goat this year. I still have quite a few of my favourite summits on my ‘to do’ list so hopefully it’s all down hill from here!

Ignacio, the weather was perfect! I chose to wear a long sleeve base layer and I was too hot! I woke up with a tanned face this morning, the snow had obviously reflected the sun.

The temperature fell quite quickly towards the end of the day so my hat and gloves came out of my pockets but my feather vest remained in it’s stuff sack all day.

Yes, I nearly always run my MTRs from a 2S battery. I find 2 to 3 watts is plenty for what I want to achieve. I do carry a 3S battery at all times as I do see a difference in reports. If propagation is particularly awful, the 3S might just be the difference between qualifying and not qualifying the summit.

Signals from Spain were excellent yesterday, was nice to work you. I do find myself wishing that I could have a proper conversation with people but my CW isn’t up to that standard. I’ll have to take out an SSB rig at some point and spend some time on a sunny summit rag chewing to chaser friends.

Great pics Colin the one of your operating position on Red Screes took me right back to when Gerald and I did it - even operated from virtually the same position with my pole pushed into the snowdrift! Thanks for sharing