Another late and lazy morning on Monday 10th December, with the blue skies and warm sunshine promising a lovely day ahead and for a while the most important thing on our minds was what to have for breakfast.

The summit planned for today was Gairia (EA8/FU-023) one of the best unspoiled small caldera (extinct volcano) on the whole island and was without doubt worth a visit. On maps, and even on satellite views, there were several trails leading to the top with one main route working its way to the centre of the caldera. These all promised a relative easy assent in contrast with the previous day’s excursion into the unknown.

Gairia is situated towards the centre of the island and is the most southerly caldera-like SOTA, the hills changing more to long ridges to the south and west. Gairia is recognised as a national park so is walked more than most. The caldera itself has dropped to the south leaving a slightly lower rim that side and two arms and a valley between running south towards a flat plain.

We turned off the road to Tiscamanita up a residential road and ended up parking in front of the entrance to a restaurant. From here we continued up the road before turning left onto an obvious track that led to one side of the volcano’s valley. The assent was easy enough at the beginning, with the path working its way around the south side of the main summit to a ridge on the west side of the valley. Here we decided to take the path that takes you towards the centre of the valley and eventually the centre of the caldera. This trail climbs steeply to the collapsed rim where, if you wish to explore, it then drops into the centre of the extinct volcano. From this point the summit was less than 100 metres above us but with no obvious route up the very steep edge of the western rim on terrain which looked, at first glance, quite imposing. There was, however, a faint trail leading across the valley towards its western edge which we had originally crossed some distance below. 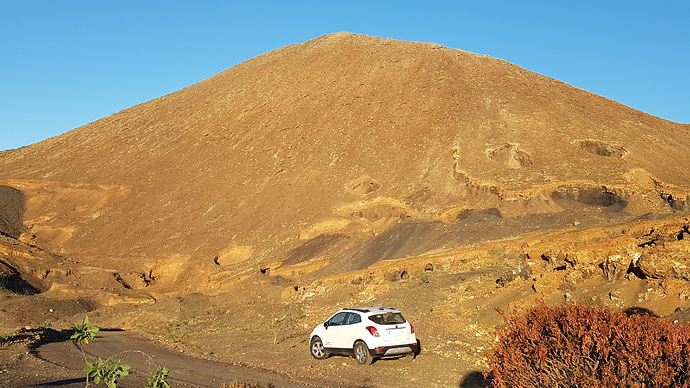 For a short while we chatted about either taking this very narrow and uncertain trail or try to find another way up. But while Helen was looking the other way I started climbing and was quickly a few metres above her on the loose surface up the main ridge. With care it was possible to find good secure ground but the terrain was, by far, more challenging than the day before and without a head for heights could have been very intimidating. As I was leading Helen could follow my route and if I could see a better course looking back than the one I had taken I could direct her. Cautiously we worked our way up the unstable surface. Just below the summit the rocks became steeper and we were onto a proper scramble on scree covered sloping shelves. With gentle encouragement Helen worked her way to where I sat just below one final small climb. We happily topped out right by the summit marker. 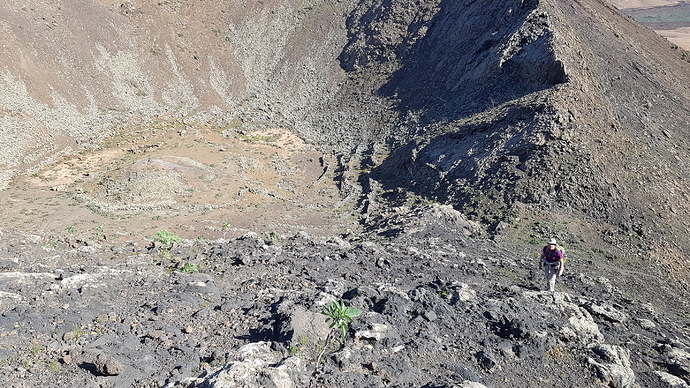 The summits on all the hills are barren and rocky making it impossible to penetrate with any form of guy-pegs. Generally it was easier to find some movable rocks or a protrusion from a rocky outcrop and tie the guy-lines with a larks-head knot; the antenna, being a simple vertical supported by a 5 metre travel fibreglass fishing pole, did not need any substantial fixing points even in a wind. 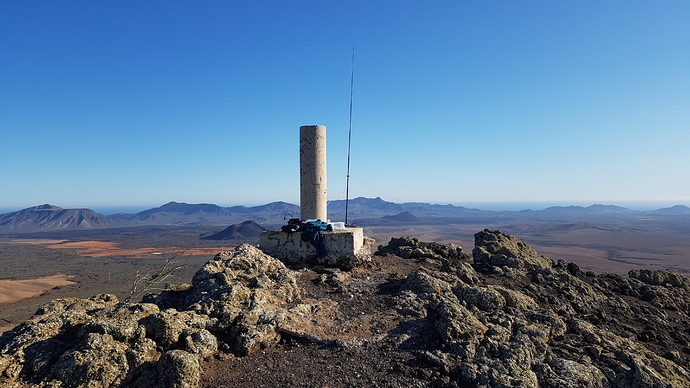 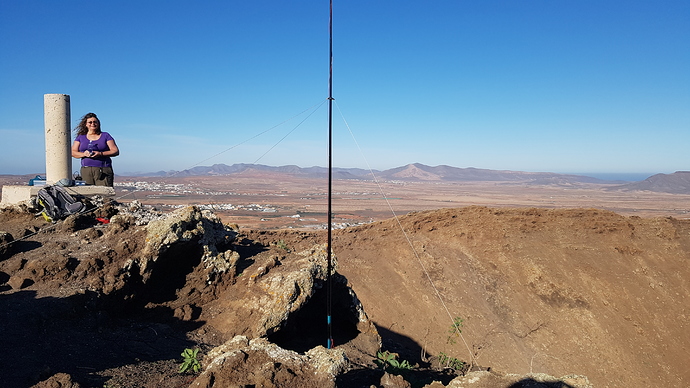 I stared the activation on 20 metres getting 30 contacts in a leisurely 45 minutes before handing over to Helen so she could qualify the summit. She made 10 contacts including one into Brazil. We reconfigured the antenna for 18 metres and I added another 14 to my final count and ended the activation when my calls were unanswered. Again the bands were not in the best of condition with plenty of QSB but most contacts were fairly easy with good signal reports given both ways. We had spent an hour and a quarter operating and it was now 4pm and time to leave. 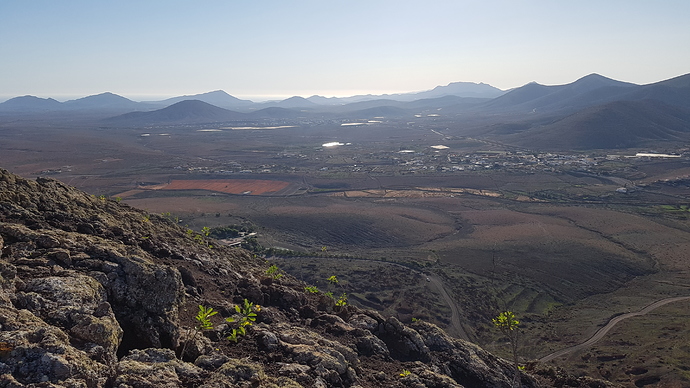 As is usual, the best way up is seen from above where the trails and tracks become obvious. We realised that if we had chosen to stay on the first edge we came to, instead of going to the centre of the caldera, the climb up would have been fairly steep but on a relatively easy surface; there was plenty of volcanic rock to provide grip, allowing one to avoid the more slippery grit covered surfaces. This was turning out to be a “where not to climb for ease” set of adventures. We should have followed the first rule of climbing calderas that we learnt on Lanzarote – follow the collapsed edges of the rims around to the summit! 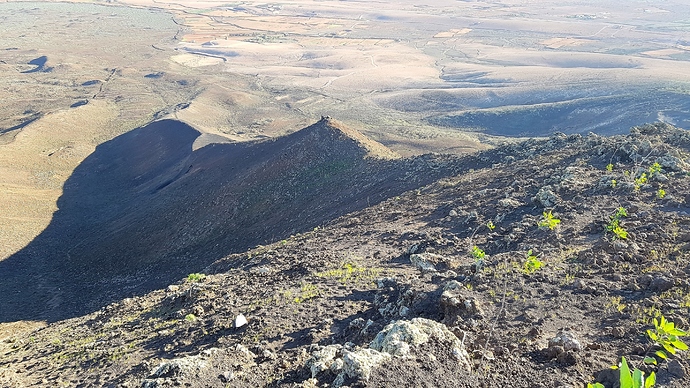 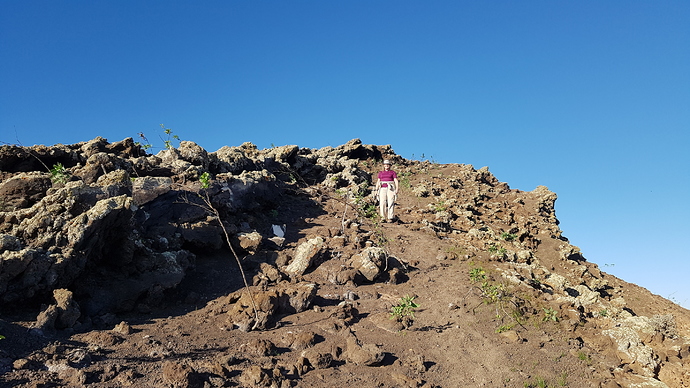 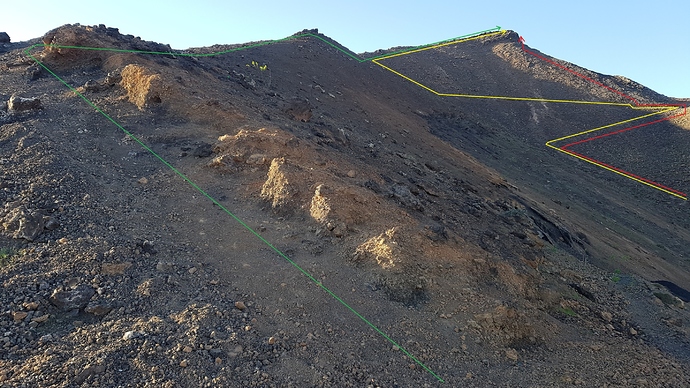 The following day, Tuesday, was a geocaching day and we visited the west of the island. We explored Playa de Garcey, a quiet secluded beach where the ocean liner SS American Star run aground in 1992 while being towed from Greece to Thailand (with only a couple of small parts now visible at low tide). From there we travelled slightly north to the beach and caves (reached by various coastal paths) at the small village of Ajuy. We then crossed the Betancuria mountain range (via a single track mountain road travelled by some large coaches) with its various miradors, providing spectacular views across the island and over the agricultural terracing and silted reservoirs. All these are well worth a visit if you come to the island. 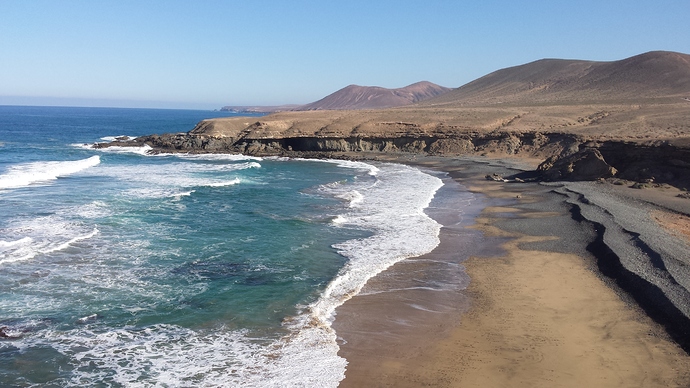 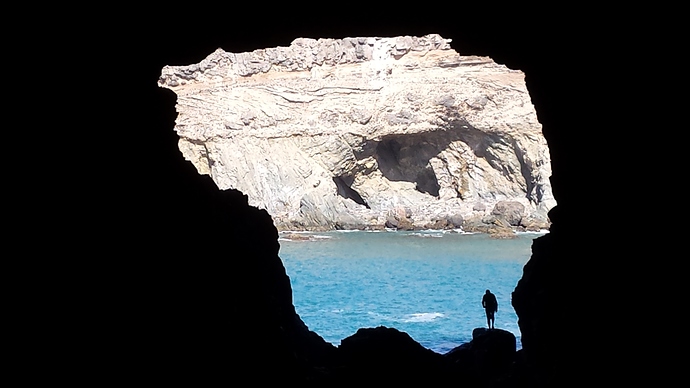 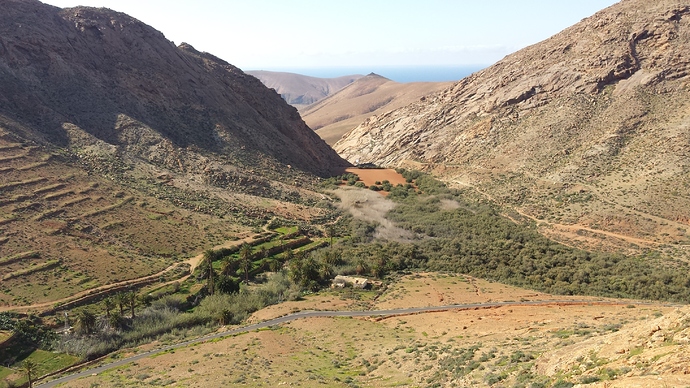 At the end of the day we took a detour to look at a possible parking spot for the unactivated summit, Morro Tabaiba (EA8/FU-018) which looked like it could be another challenging climb… or was it? A plan was hatched for this to be our next activation.

Now I have red all your activation reports from Fuerteventura. Great pictures and interesting and detailed reports. Inspiring…
73 de Jaan

Hi Jaan, pleased you enjoyed reading them. Its always nice to have someone comment.