Both Helen and I have been very busy throughout the year and needed some down time. With leave needed to be used before Christmas and some soon to expire holiday vouchers, we decided to take a late break in the sunshine. Fuerteventura was one of the Canary Islands neither of us had visited before and with it being off-season we could get a reasonably price self-catering holiday for 11 days. As usual we would hire car (a cross-over Opal Mokka X in this instance since we knew there would be some dirt tracks to travel) and try to explore as much of the island as possible in the time we had. Our base would be Caleta de Fuste, a purpose built resort with a beach, marina and plenty of places to eat, situated in the middle of the island just south of the capital (Puerto del Rosario) and airport.

The break was not intended to be a pure SOTA activating holiday but somewhere to escape and wind-down a little. Very little planning and preparation was done and we did not have time anyway, not even to have a dry run activation with the equipment. Planning would happen while we were there. There were a few objectives we had in mind: explore; climb to the highest point on the island; activate a unique; and activate a summit I had previously chased.

First thing we did on arrival on Saturday 8th December was a rough sift of the possible summits based on distance to walk, elevation, potential paths and available geocaches but as we quickly found this was not adequate. Compared to Lanzarote, on which every caldera is walked leaving an obvious trail whether there is a path marked on a map or not, Fuerteventura is much more unspoilt with only the largest mountains and those close to towns having obvious routes to the summits and then only if you look from the right direction! This may be in part due to the fact that Fuerteventura is the least visited of the big Canary Islands and the last to add tourist attractions whether they be museums, miradors (viewpoints) or walking routes.

Add to this the terrain which was uneven and potentially ankle-straining. We quickly found out that the dry desert conditions and the grain size of the sand or scree meant that at a certain gradient gravity would win over friction; we were going up and down steep slopes so progress was slow. Generally this meant looking for large rocks fixed in the ground, the igneous rocks never failing to provide a good surface to find grip, but after a time we got used to the ground. Good job we had our walking boots.

Our first full day on the island was Sunday 9th December and we chose an unactivated summit, Montana del Ecanfraga (EA8/FU-016), at 534 metres (but only 1 point) the largest caldera in the north of the island. There were a number of geocaches around the rim but we chose to follow the route suggested on the oldest cache page which involved a steep direct attack up to the tallest part of the rim; a baptism of fire as it turned out. The climb itself would start at 180 metres so only 350 metres of elevation!

We woke early but did not leave until late morning. The weather was pretty much consistently 22-24°C during the day every day we were there and it being near the winter solstice the sun was not as strong as it could be in the summer. In fact it felt like a nice summer’s day in the UK without the humidity. We did not realise it when we set out that today was going to be a bit different. The sea mist blew in from the east filling the valleys and leaving the mountains like islands. 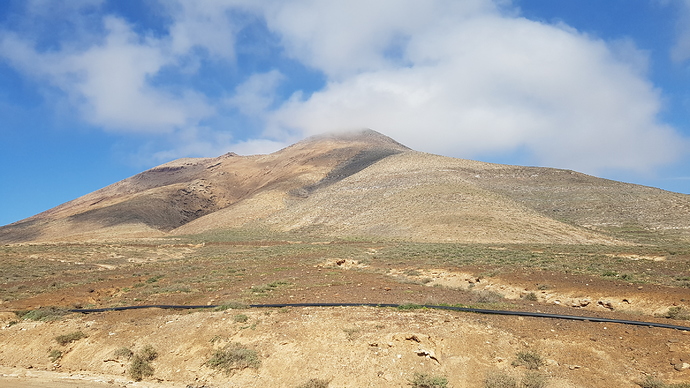 Parking was to the south of the caldera down a dirt track from the town of La Olivia and we arrived just after midday. Initially it was a flattish walk over rough ground towards the mountain. We hoped to see a track upwards but none materialised so we used the tried and tested method of following the least steep route upwards to the ridge above us, one of many fingers reaching down from this side of the summit. As we climbed the slope got ever steeper with the final part a proper hands on scramble, albeit fairly easy. After 2 hours of slipping, sliding and scrambling, we finally topped out to be met by the view over the caldera and the realisation that maybe it would have been easier to come from the north and around the rim. Never mind, we had made it. It was now that we could appreciate the fabulous view of the mountains in the mist, it having reached it furthest travels into the island. 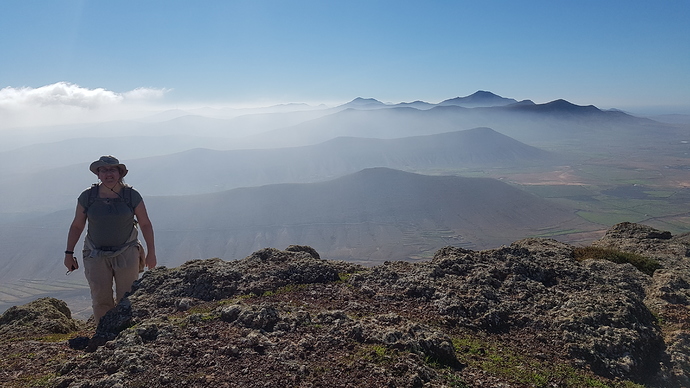 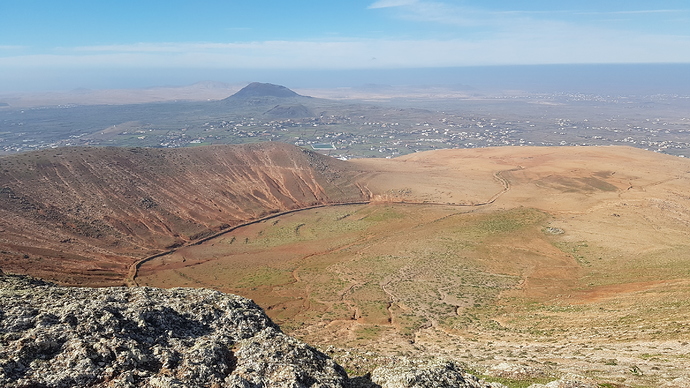 We set up for 20 metres and were about to start when a French couple appeared having walked in from the town and around the rim. We chatted and they enjoyed the view as we started. Straight away was a summit to summit with CT2HOV/P on Serra do Alvão (CT/TM-003). With the activation started I settled in for another 14 contacts before handing the mike to Helen for another 13 and then back to me for a further 17. The band fell quiet so we changed bands to 17 metres and Helen went off on a jaunt down the eastern rim to unsuccessfully look for a geocache. Another 30 contacts in 45 minutes during which time Helen had returned and mentioned about a couple of mountain bikers that had been riding up and down the western rim while I had been operating. Both bands were not very busy and many commented on how quiet they were. 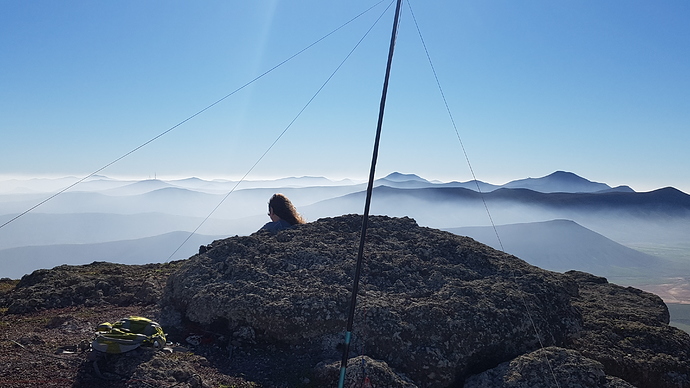 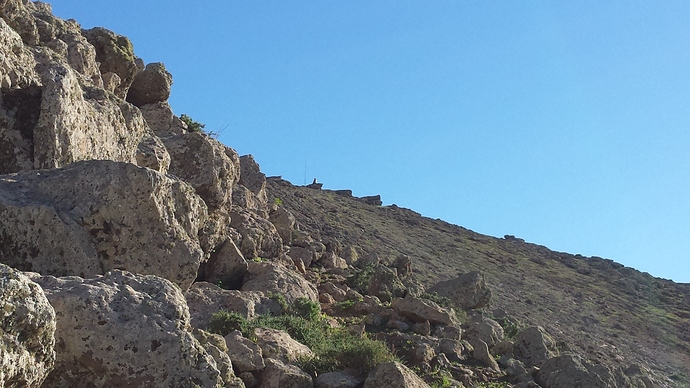 We had been on the summit for two hours, activating and taking in the views, and it was now 4pm. We had checked the night before that sunset was a bit after 6pm so we had plenty of time to get off the hill. The terrain meant that it took almost as long to go down as up, neither of us at our peak walking capacity. 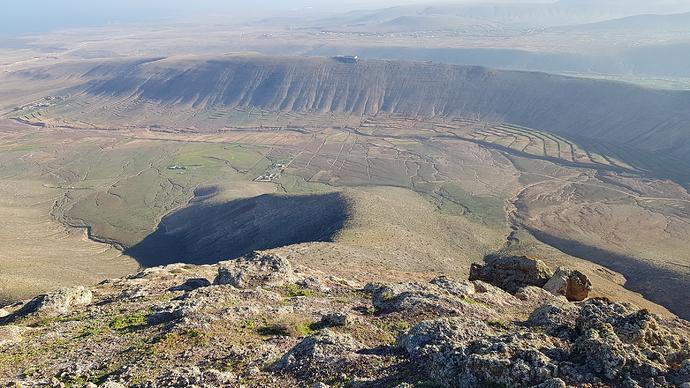 Our first summit on Fuerteventura successfully completed and a first to activate for me. This gave us a taste of the terrain so we decided that maybe we would climb a smaller caldera with marked trails for our next activation… how difficult could it be?