I bought an MH-67 mic to try and improve the talk power of the FT-817 as I had been getting quite a lot of complaints about lack of Punch in my audio.

Since using the mic, I kept finding that the tuning mode goes into fast tune (the running man symbol). With no FST button on this microphone, I could not get the radio out of this mode, which was being a pain. A couple of times my mate Chris M0KPW was with me and he plugged in his mic to restore the tuning speed,

Just by chance I found the switching into FST mode happened when the metal stud on the back of the microphone touched a metal part, touching again normal tuning was selected.
I’ve not seen this “Feature” mentioned on here, so if it happens to you, you know how to cure it.

BTW I made a major improvement to the talk power from the FT-817 by adjusting the CIO value in the engineering menu on the radio . I cant remember what the value needed to be changed to, but it was by a lot.

Nick, I’m having good luck with the DF4ZS speech clipper, which goes inside the MH-31 mic. The mic element is removed and replaced with an electret mic to make room for the CB. The original two-position slide switch is used to bypass the clipper, if desired. He has a similar one for the MH-36, and a stand-alone one in a case.

Yes, I have one of these too, they are very good. They were originally designed and sold by Joachim Münch, DF4ZS who is now SK. However the business and the call seem to have been taken over by Harry Goedde who I believe was one of his friends or employees.

I couldn’t find anywhere actually selling them though.

I recommend the exchange board from box73.de for the Yaesu MH31.
Here’s a comparison of the audio through the Ft-817 on the band in the noise (only audio).
https://youtu.be/lhVYkX5AkHw 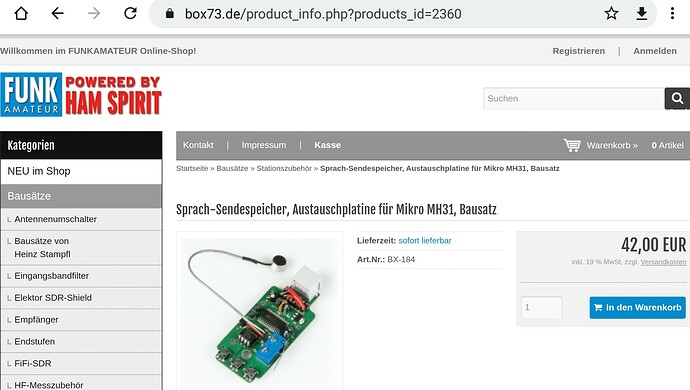 I’m sure the add-on and exchange units are pretty good, I’ve listened to You Tube video’s.

But I’m happy with the 817 now I’ve adjusted the CIO, for £ Zero and I dont keep getting told about my poor audio.

As you know the carrier is suppressed in SSB modes.
Using the menu you can effectively adjust the filter that balances out the carrier to leave the just sidebands.
If you had a two tone test input, I think you adjust for equal power in both carriers.
But if you monitor your voice on a scope, I used the one built into the IC-705, you can optimise for your voice characteristics.

Using the menu you can effectively adjust the filter that balances out the carrier to leave the just sidebands.

Err… No, you are tuning the passband of the filter for the selected side-band. I can see how that would help if you had an unusually high or low pitched voice, but it won’t increase the amplitude of the actual voice signal the way a speech compressor/clipper does. All you are doing is ensuring that the filter isn’t blocking any of the wanted signal.

The speech compressor effectively changes the Mic audio gain in real-time to give the most modulation without excessive distortion. This actually increases the wanted signal.