On Wednesday 27 February we were promised the last beautiful day so I donned my gardening shoes (my ‘nearly best’ boots having trashed both heels on the walk in to GW/SW 006/7 on Sunday) and got ready for the last 3 of the Shropshire horseshoe. This time starting with the easiest (G/WB-005 Pole Bank) which is a flattish doddle from the car park with the only challenge being remembering to veer left into the heather before the final ‘ascent’ so you are operating from non National Trust land (we’re not popular with the NT up there.) Three immediate S2S were very welcome (thank you GW4CQZ, GW4AZS and GW4TQE on GW/NW-051, GW/NW-046 and GW/NW-007 respectively) before the dipole was up and 14 2m and 70cm contacts were soon in the log.

Back to the car and, 15 mins later, Stiperstones car park with a £1.50 voluntary (pay by phone) charge apparently. The walk to G/WB-003 is short but very rocky so progress was careful but rewarded by immediate S2S with GW4TQE and GW4CQZ on GW/NW-015 and GW/NW-044 who were being somewhat more energetic than us! 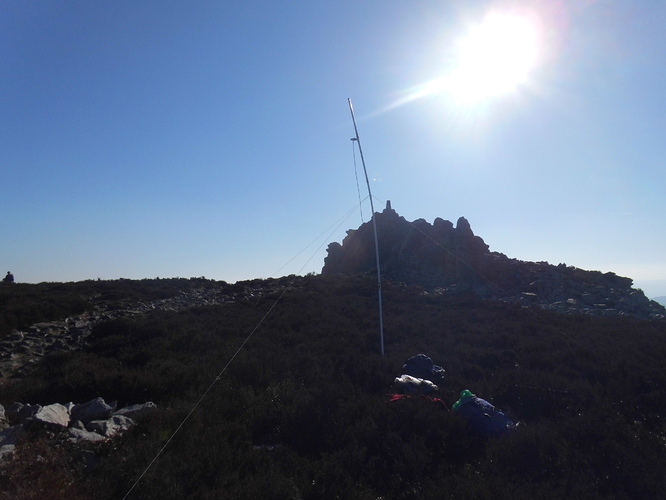 Into the car and in 20 mins were beside the ‘water works’ and ready for the only climb of the day - Corndon hill GW/MW-013. This hill has to be treated with respect as it is quite steep with short grass and it had been responsible for one sprained SOTA ankle already this year. After a walk along the approach track I gingerly started the ascent (with the help of the wire fence in a few places…) and found that some of the ‘footprints’ (aka ‘troeds’ to some activators!!) were very useful to keep pressure off my battered heels. I eventually got to the top and sat thankfully on the seat (specially positioned for exhausted activators) after 6 attempts to put up a dipole were thwarted by the breeze until I had the bright idea of lashing the pole to the seat BEFORE pegging out the guys (oxygen deprivation at high altitude kicking in??)

It was 1600 by now which is getting a bit late for getting contacts but the take off is rather good so Manchester, Rugelely, Nantwich, Cheltenham, Cardigan, Leominster were quickly in the 2m/70cm log. 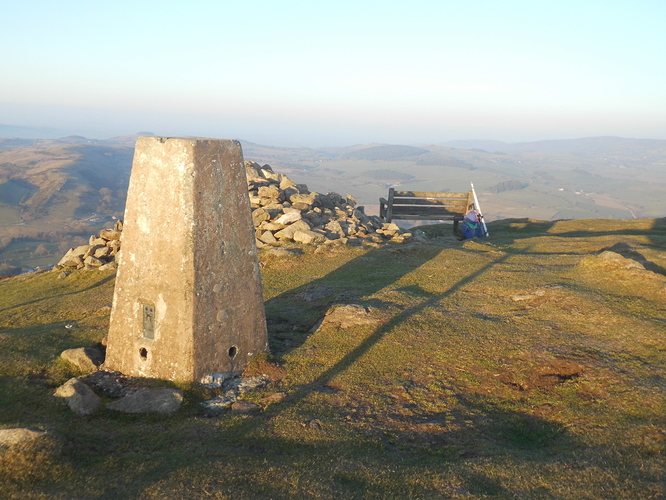 DSCI2780.JPG2592×1944 1.92 MB
As the sun started to set and the cold creep in a voice was heard ‘from the South-East…’. The call came from Ian G7HFS/M with his car on Beachy Head! Reports of 54 and 53 were exchanged as I checked that he really was near Eastbourne running 40w on a quarter-wave on a magmount on the car. This was no aircraft bounce as we spent some time discussing where I was and the audio was perfect. The last contact was to Mike 2W0WMW in Rhydymain which is on the A494 Bala to Dolgelllau road and tucked into the valley behind the Aran range so was almost as unlikely but not quite as far. Back home again (after a careful descent), the South coast contact seemed about 290 km which wasn’t bad with a vertical dipole and 5w. Was this ducting? 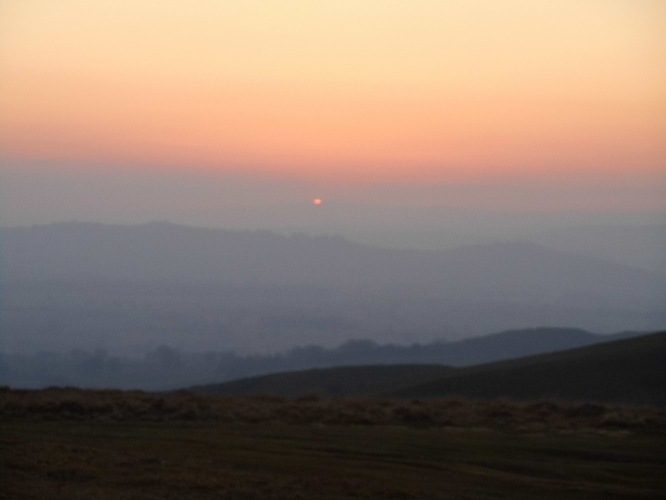 Thanks for the report and the pics. Very envious of your day out but as you know I was rather tied up with drainage pipes and paddling around in the water…all done now so back on the hills next week. Glad to hear that the gardening boots held up but no doubt a visit to some well known store is on your agenda

(aka ‘troeds’ to some activators!!)

Aha, it seems that you have to be careful what you are saying. Big Brother is obviously alive and well.

Many thanks for the excellent report and photos Viki. No chance of working you from here with rising ground to the west of me, but I was very pleased to grab a brief QSO with Rod on 5MHz on a day when 7MHz CW was the mainstay of my chasing activity.

Thank you for the S2S and the report / photos. I hope the heels are recovering well.

It was indeed a lovely day to be out on the hills. During my activation there was a very noticeable heat shimmer rising from the dark heather, under bright sun and gentle breeze.
Reaching down through the heather and underlying moss to pull my aluminium pegs, though, I found that they were icy cold - a reminder that February was still with us!

we’re not popular with the NT up there

The vast majority of activations there have been trouble-free. I think so long as activations can be described as “low impact” (a phrase coined by NT themselves when in conversation with SOTA MT back in 2003), then there is no problem.

I see NT often on The Cloud G/SP-015 (they have ongoing groundworks up there), and have many cheerful conversations with them. They are fully award of my activity and are totally fine with it.