I would have a humble request to follow the example given by Manuel @HB9DQM on his sotl.as summit info pages and acknowledge summit first activations that were done in a team effort.

For example on sotl.as it is clear that two activators were doing this activation:

On the summit info page this is basically not reflected at all: 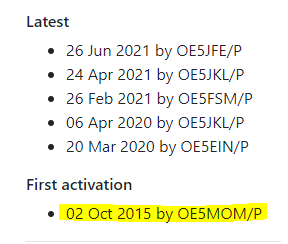 Or for even bigger groups on very challenging summits:

I don’t know the sql-query that Manuel is using but I imagine it is based on the same day - or the timespan of some of hours past the first DB entry - to fill the list of first activation callsigns.

If the reflector is the wrong place for this request I will also submit it by contact form.
Thanks
73 de Joe

Well, I guess strictly speaking, the first activator is the one who makes the first QSO, and it seems that the summit info page correctly reflects that.

The first activator could be retrieved from the database API (not sure if this was already the case when I built that part of SOTLAS), but it is a separate HTTPS request. So if there are multiple activators on the first day, SOTLAS simply lists them all, sorted alphabetically. I kinda like it that way – no hard feelings about who in a group makes the first QSO on a special summit

Thanks Manuel for the insight. That is the correct mindset. The team effort is what counts.
Of course there is technically only one very first QSO in the database per summit.

Which bit of “first” as opposed to “second” or “third” is not clear? 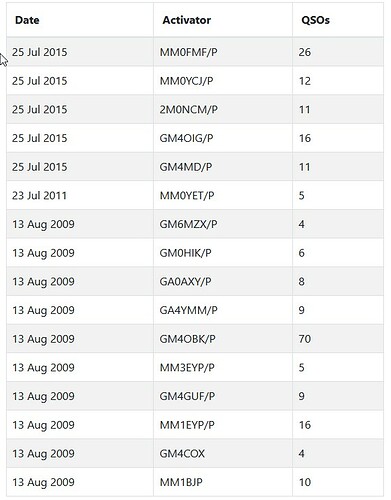 Also a nice example of a team effort. I guess everyone was equally important for the success/fun of activation=

the first activator is the one who makes the first QSO

First or simultaneous depends on your time resolution.

I think for SOTA purposes it’s a UTC minute and if as Jamie (@N6JFD) and I did last Saturday on Emma W6/ND-395 we shared a station and Emma’s first two contacts were at 16:09 UTC ( one by me and one by Jamie) making us both first.

This was entirely contrived as we wanted to share the FA accolade as we invested equal energy getting to the peak, setting up etc.

We even had our last contacts at the same minute.

This written it does appear the official SOTA system is using a different algorithm to determine first as in our contrived situation, I’m listed as first on Emma which clearly wasn’t our intent!!

Only one thing can be first because that’s what first means., it’s an ordinal number and infers order.

SOTL.as is listing the first day’s activations not the first activator. Changing the description to that with the data it shows makes it logically and syntactically correct: it shows on the first day the summit was activated by several people. That’s the correct use of an ordinal term and I think is a perfectly acceptable way of showing the data.

If you use ordinal terms and numbers then get them correct or don’t use ordinals.

Thanks for the clarification Andy (@MM0FMF).

How do you determine the order if not from time?

Humpty Dumpty smiled contemptuously. “Of course you don’t—till I tell you. I meant ‘there’s a nice knock-down argument for you!’”

“When I use a word,” Humpty Dumpty said, in rather a scornful tone, “it means just what I choose it to mean—neither more nor less.”

“The question is,” said Alice, “whether you can make words mean so many different things.”

“The question is,” said Humpty Dumpty, “which is to be master—that’s all.”

Alice was too much puzzled to say anything, so after a minute Humpty Dumpty began again:

“They’ve a temper, some of them—particularly verbs, they’re the proudest—adjectives you can do anything with, but not verbs—however, I can manage the whole lot! Impenetrability! That’s what I say!”

How do you determine the order if not from time?

The time is used to infer the order. In your case you have both with the same time and at that point the order of the returned data is, I believe, implementation specific. i.e. ordering the same by time where all the times are the same may well give different ordering on Oracle than MariaDB than MS-SQL.

It may well be that when sorted by time and they are all the same time the order depends on how they were recovered from the disk. Or maybe order by some other PK field on the various tables joined.

It’s best said to be “implementation specific” and you shouldn’t depend on anything specific happening in this case.

The team effort is what counts.

Err… For the ascent maybe. But SOTA is an individual sport not a team one so the first activation must go to a single person.

I am not questioning that there is only one first QSO that can only be done by one person. 100% clear

The general rules in:
3.7.1 Criteria for a valid Expedition
Point 5 even mention the activation team
5. All equipment must be carried to the site by the Activation team

So to follow statement of Andy: It is the “first day’s activations” team that I think could be documented on the summit page.

But if it is too complicated never mind. The teams anyway know what they accomplished and that is the main part.

Also a nice example of a team effort. I guess everyone was equally important for the success/fun of activation=

Yes, very true - nice one Joe - Thanks. The organisers did a great job and were were Jimmy (Son) and Tom (Dad) The EYPs.

PS Could a name for Tom’s latest band LOL…

But SOTA is an individual sport not a team one

Not entirely as you do need chasers to make an activation.

While not wishing to appear pedantic it is also not a sport as sport by definition are competitive which SOTA isn’t supposed to be.

Best solution is for the team to embark on a trip to activate a series of virgin peaks and take turns being first. What happens if there are three operators and four peaks? Rock paper scissors on the last peak. What happens if nature terminates the trip after the first two? Fisticuffs.

SOTL.as is listing the first day’s activations not the first activator. Changing the description to that with the data it shows makes it logically and syntactically correct: it shows on the first day the summit was activated by several people. That’s the correct use of an ordinal term and I think is a perfectly acceptable way of showing the data.

Fixed. I hope everybody is happy now and I can move on to more important things in life

Use correct terminology for first activations

I hope everybody is happy now

This is the internet. No one is happy.