It didn’t go quite like I’d planned, but I got my first summit activated yesterday.

My wife and I traveled to her family’s home down in Arkansas for Christmas, and we planned on doing activations along the way in both directions. I had several 6pt peaks with winter bonuses picked out. Alas, the weather didn’t cooperate either trip. On the way down it was pouring rain and in the upper 30s as we passed through the hilly area. We’re fine with hiking in that weather, but we didn’t have shelter to set up the radio for the activation. It snowed the night before our drive home and we weren’t feeling the drive into the mountains in a 2wd car.

Instead, we settled for a 1pt drive-up summit about half way home – Bald Knob, W9/IL-002. Ironically, before moving to Chicago, we lived in a town ~5mi away and we’d been to the top many times. Unlike most hilltops in the area, Bald Knob lives up to its name, and the views are really spectacular (particularly for IL). It has no winter bonus, but we felt like we might have earned one: it was about 25F and the wind was whistling steadily at 15-20mph.

The activation went very smoothly. We set up in 5 min, spotted ourselves, and had our first contact a minute later. We got our 14th contact 18 min later. After two qrz?-s with no response, we packed up and headed down the hill (and to a winery 10mi down the road!)

We’ve done a number of WWFF activations, but we both agreed that there is something uniquely compelling about mountaintop radio. Looking down from a summit on the land sprawled all around you and hearing someone’s voice crackle on the radio from the other side of the country (or world!) is pretty damned cool. In the end, I’m glad we started with Bald Knob. It wasn’t much physical work getting there, but it did feel like a proper summit.

We’re already planning the next expedition. 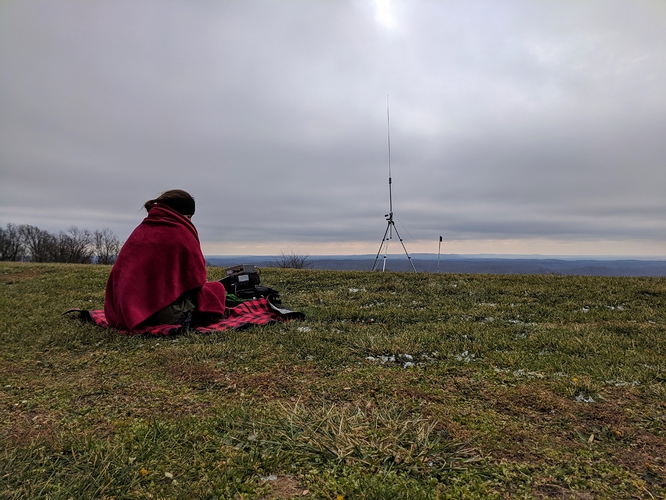 Glad I got to work you! Great signal! Wishing you and yours a HNY!

Great to hear! You were also loud and clear. HNY!

We’re fine with hiking in that weather, but we didn’t have shelter to set up the radio for the activation.

You will develop the kit as you go along Joe. The activation that you did carry out in 25F and 15-20mph is no mean feat in itself for a first outing. Excellent stuff!

…there is something uniquely compelling about mountaintop radio.

I wholeheartedly agree. I particularly like activating summits that overlook the sea. That adds a whole new perspective to the view.

73 and HNY. Hopefully catch you on a summit one day.