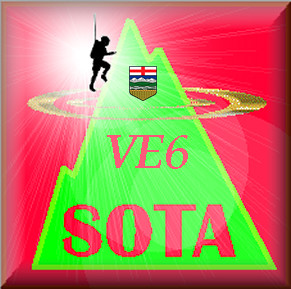 Stoney Squaw Mountain is an easy 45 minute walk, 185m ascent from the Noquay Ski Area Car Park near Banff, Alberta Canada. At this time of year the trail is usually covered in snow, so proper foot wear and hiking poles are recommended. Due to its infrequent use in the winter (compared to Tunnel Mountain) the snow is nicely compacted, no icy scramble and no thigh deep snow flailing.

This peak is significantly lower than the surrounding ranges (1868 m 6129 ft), so 2m handheld are of limited use (repeaters VE6WRO [D-Star], VE6RMT [soon to have linking with Calgary] are both easily accessed), unless you might catch someone on simplex in Banff. I did however use DSTAR to beacon my position on APRS.fi

Since its only a short walk, my original plan was to set up my GFRP pole and use my MFJ 1778 G5RV, sit on 7.285 for 30 minutes then switch to 14.340 until I rustled up the requisite QSOs. Unfortunately I forgot that I had used nylon tie-wraps to neatly coil my dipole and did not have a tool to cut the nylon (Oops!). Fortunately I had a plan B and setup my 5m vertical, the KX3 ATU easily tuned to 40m but after 30min my weak signal did not elicit any QSOs. Switching to 20 m quickly brought N4EX who was kind enough to SOTA spot me (VA2SG also spotted txs), quickly followed a further 10 QSOs.

I was using an Elecraft KX3 with a 1/4 wave 5m vertical, 24x counterpoise mounted 1.5m approximately above ground. SWR = 1.8:1 flat peak with snow cover and trees.

Many thanks to everybody’s patience with my weak SSB signal:

Nice job Walker! You are blessed to live in such a beautiful area. Thanks for my second VE6 QSO and new association.

Your 10 watts sounded gud on my Moxon. Congrats Walker, it was a pleasure.

I saw you use a bunch of radials. Maybe 8 would be sufficient?

I think the gain over 8 radials is rather small.

Just throwing ideas. 73 Walker, and you bet I am jalous of your sceneries…

In reply to VA2SG:
Thanks JP, I really appreciate your QSO and advice. I was actually only 5 watts mostly today (I have been having battery charging issues).

I am definitely a Newbie HAM so any advice is greatly appreciated, whether SOTA, operation technique or equipment advice. The story around my counterpoise radials has come from a number of iterations, research and experiments. It has been hard to control all variables. My best summarized research comes from 2012 ARRL Manual page 21.27 . To optimize SWR and a feed-point 50 Ohm impedance for a 1/4 wave radiating element suggests something between 16 and 24 radials (2-3 dB loss). I use elevated radials to improve takeoff angle and it conveniently works with my guyed 1/4 wave vertical.

That’s the theory… In practice I have achieved better than 1.3:1 and 50 Ohm feed impedance for parts of 20m SSB, but that was on flat wet grass not rocky peaks strewn with shale (typical Canadian Rockies). My current compromise has my radials crimped in bunches of x4 that allows me in ideal circumstances to make x6 journeys out from my feed-point using fingers and arms to separate the radials. However deep snow leads to a struggle to deploying radials and start transmitting in under 40 minutes.

Please jump in with advice.

I am almost sure the difference between 8 and 16 radials doesnt worth it. 8 radials IMHO would be the best compromise.

When I had my Buddipole vert on CW QRP, I used to spread 2 radials on 20 and one on 40 and it worked very well, but this is in CW.

In reply to VA6MCB:
Congrats again Walker…you’re on a roll! Too bad I work out of town during the week and only get near my rig on weekends so no qportunity to work you. Glad to see J.P. made a QSO with you from QC!
Thanks for giving 40M a try…perhaps if you try it again in the future start on 20M first till you are spotted and have gotten your required number of QSO’s …then ask someone on 20M to spot you for your move to 40M so chasers know where to listen. 20M is definitly the “bread and butter” band for Canadian SOTA Activations!