He would most definately pointed out that understanding relativity as key to SAT work. Its as a near a perfect example, time dialation for GPS, Not to mention a moon bounce.

To see and play with things like this make me happy, which is why I got a radio licence.

The “8W” WiFi amplifier uses two YP242034 devices which are rated for 34dBm each (P1dB). The pair is good for 5W+, but people have been reporting getting from less than 2W to over 6W from them. I think the internal DC-DC converter should be investigated if the output is low; nominal is 6V but some people have reported it dropping down to 5.6V or less under load.

Re filtering, I built a simple transverter and pulled two SAW filters out of a very old 80211b wifi access point. They roll off beautifully below 2.4GHz and get rid of the LO (an ADF4351 module) and image. I’m driving it with the FT-817 at 435MHz. 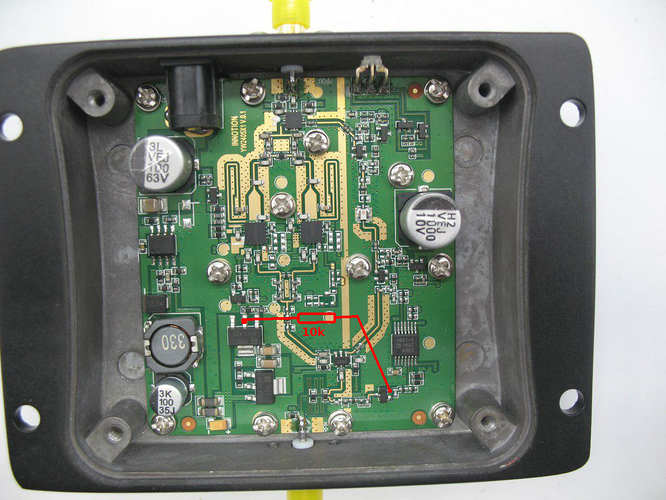 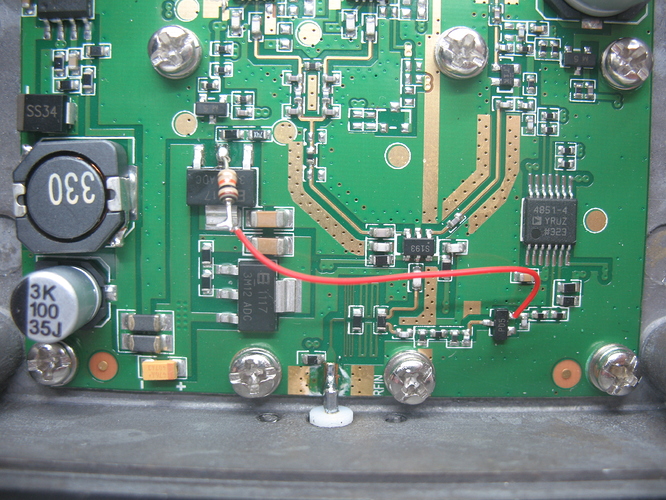 P.S. As I’ve mentioned elsewhere, The LED is Red for Rx, Green for TX!!
Also, the output connector is RPSMA, but easily swapped for a ‘proper’ SMA.

I have just modded my amp to feed the RF directly into the PA fets (alleged to give 4dB more gain). It was far from easy even with a fancy 150W JBC iron as the ground areas are very well connected (thermally) to the heatsink. EVAL-CN0417-EBZ on order to boost the output from the Pluto.

Glad to know I’m getting out!

Do you have a link to the input mod (or photo) please Richard? Sounds interesting.

Which implies that with a very much smaller antenna and as little as 1W, JT-65 and even FT-8 should work.

3dB polarisation loss in there too. The photos and lots more besides, are on Twitter #Eshail2

I have written a few notes on dish feeds here.

Yes, indeed. Just shows how sensitive the sat is.

I decided to conduct some real-world tests here after getting very poor results with the dual-band feed on my offset TV dish I use for the downlink, compared with the 2.4GHz wifi dish I was already using.

To my surprise, I found that placing a 2.4GHz feed just above the LNB is only marginally worse (1-2dB) than placing it in the focus.

Tested feeds were a single band LHCP patch, a bi-quad and a can (sorry, circular waveguide) with 1/4 wave probe.

The LNB was left in place and the 2.4GHz antenna held above it while transmitting a carrier and measuring the strength of the return signal on the downlink. The signal was also peaked by moving the feed towards or away from the dish.

The single band 2.4GHz patch came out best of course, slightly better than the wifi dish, but even the can was only a few dB down.

It’s very easy to try. It helps that the wavelength at 2.4GHz is more than 4 times the wavelength at 10GHz, so everything is at least 4 times less critical. Placing the 2.4GHz feed at the side of the LNB wasn’t so effective, so it is obviously a property of offset dishes.

The patch is getting waterproofed and mounted on the downlink dish when the weather permits.

Inspired by your success with low power I will have a go tonight. I only have about 50 mW at the moment but it might just work.

G3CWI returning from an activation - 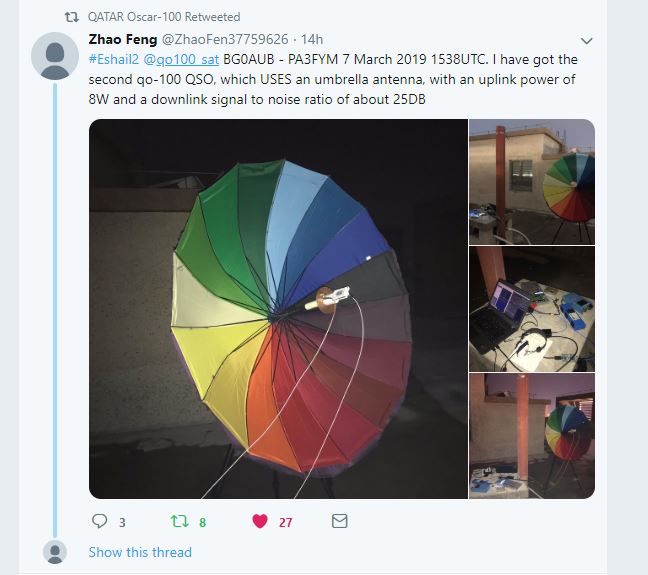 In case anyone wants to homebrew their PA, this is a relatively simple project from DB4UM using SKY66292-11 (about 34dBm out for 2dBm in). PCB available from OSHpark.

Good spot. Those QFN packages are hard to solder by hand but it looks like he has extended the pads to make it possible.

[Edit: looking at the device data sheet I note that it has a large ground area underneath (not surprising really - needed for thermal reasons). That makes solder paste, in an oven or on a hotplate, the only viable construction technique. The device is also only rated at 630 mW o/p (maximum) so 2 W is well over-the-top. ]

Yes, these are designed for ultralinear LTE operation, +28dbm is probably the sweet spot for that. They also specify +36.1dBm for 3dB compression (which is probably achievable for CW). These are the test results from Felix:

Here are the S-Parameter of the PA including the SMA connectors. The gain is really close to the expected 34 dB and the input matching is also reasonable. #QO100 #Eshail2 #hamR
1 Like