As a visitor to Ireland, I have always noticed the Wicklow mountains appearing as I make the return journey to Dublin, but have never found time to explore.
On this trip, I factored in a few days based in Newtown Mt Kennedy, on the western edge of the National Park.
Arriving ahead of schedule on Monday, I headed for Djouce EI/IE007. This proved to be a good place to start, as most of the route follows the Wicklow Way long distance walk, and much of it is in the form of a board walk.
Great views from the top over Dublin bay and round to the mountains. Plenty of room for antennas on the peaty summit. 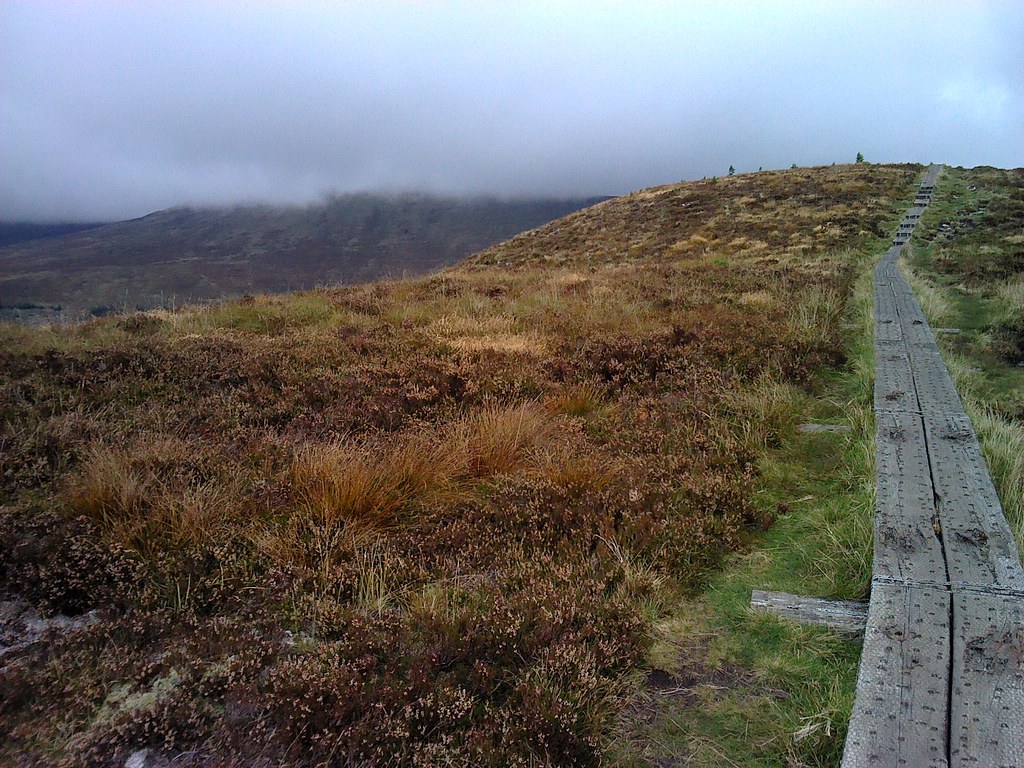 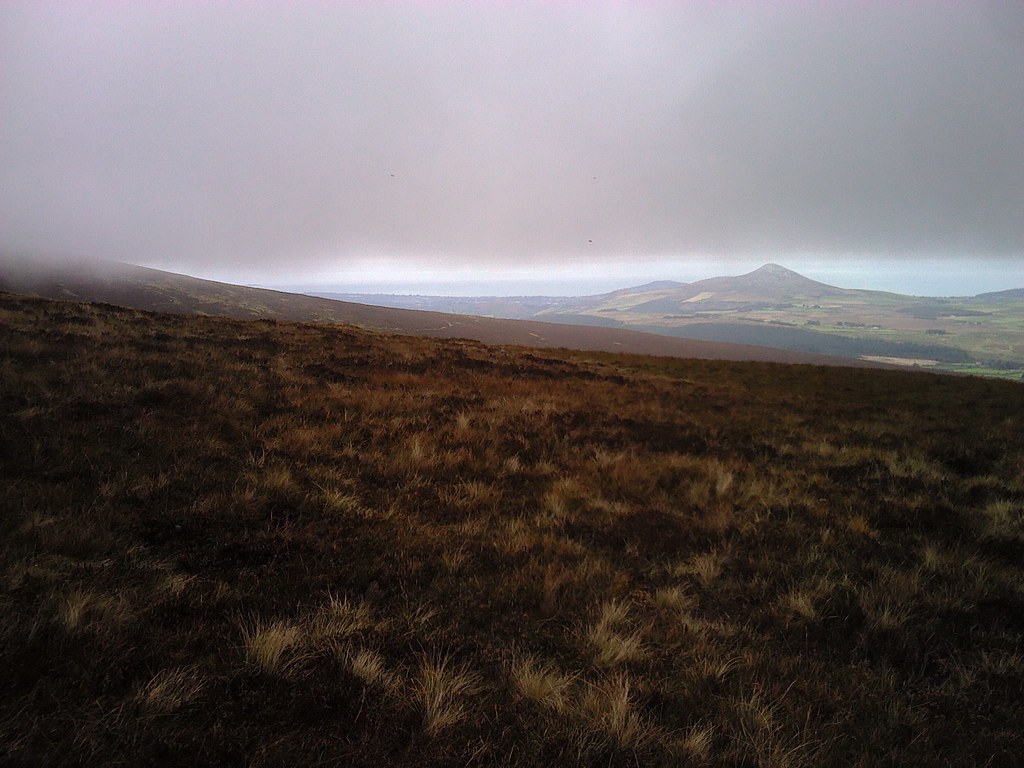 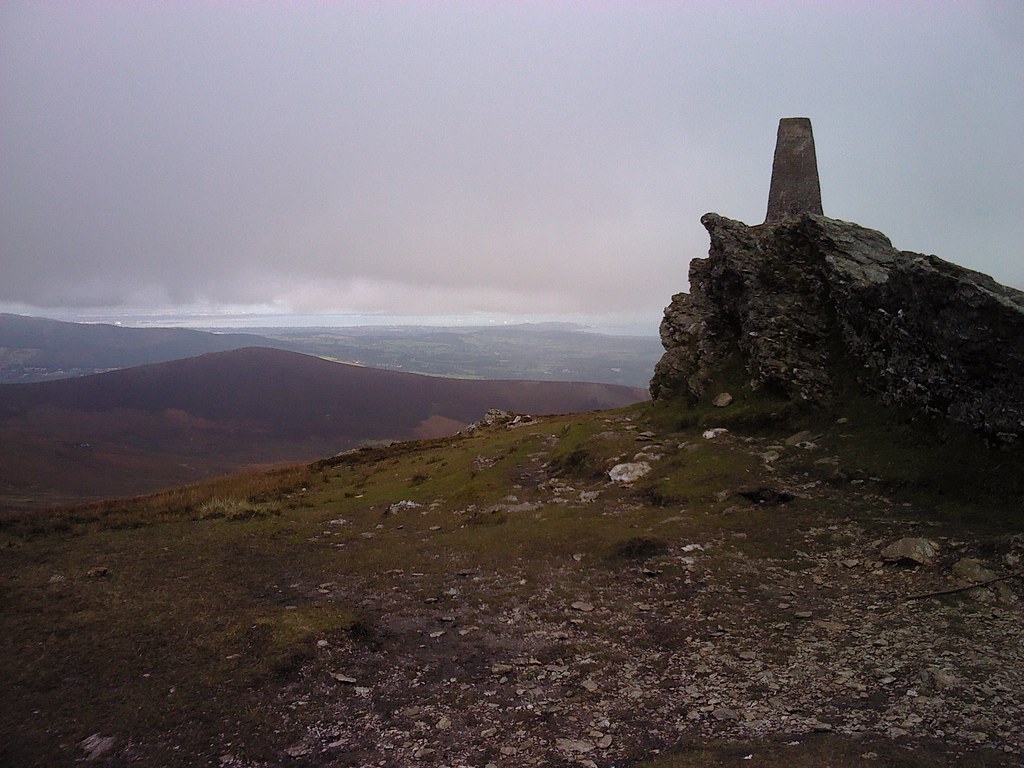 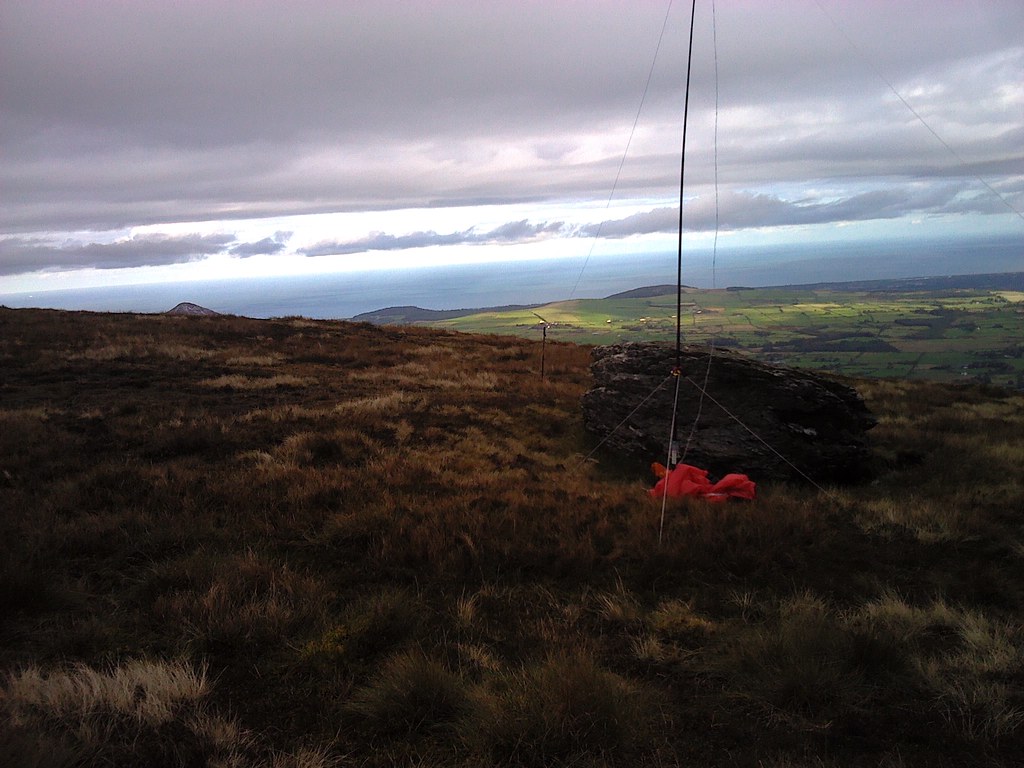 JB Malone memorial on walk down: 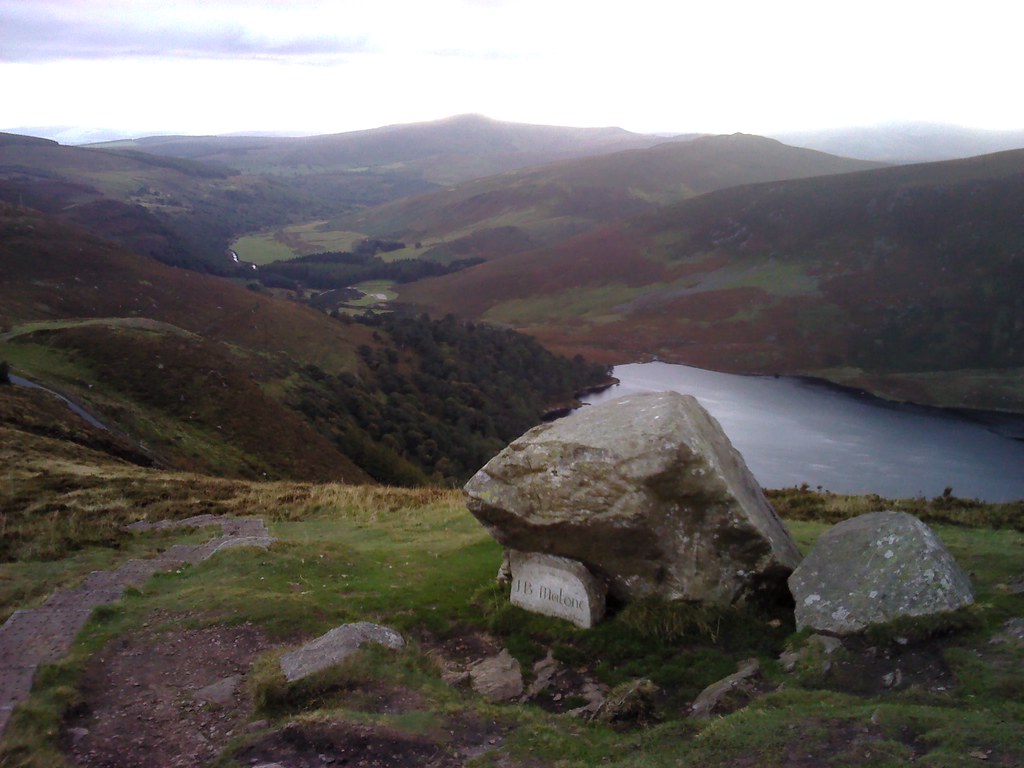 On Tuesday, headed over to Tonelagee EI/IE003.
This was also a fairly straightforward walk up, but without the formal path. Much of the ascent was in low cloud, so an eye was kept on the compass to aid the return journey. Again there was plenty of room for antennas at the summit, and a convenient rock formation to provide shelter from the stiff breeze. 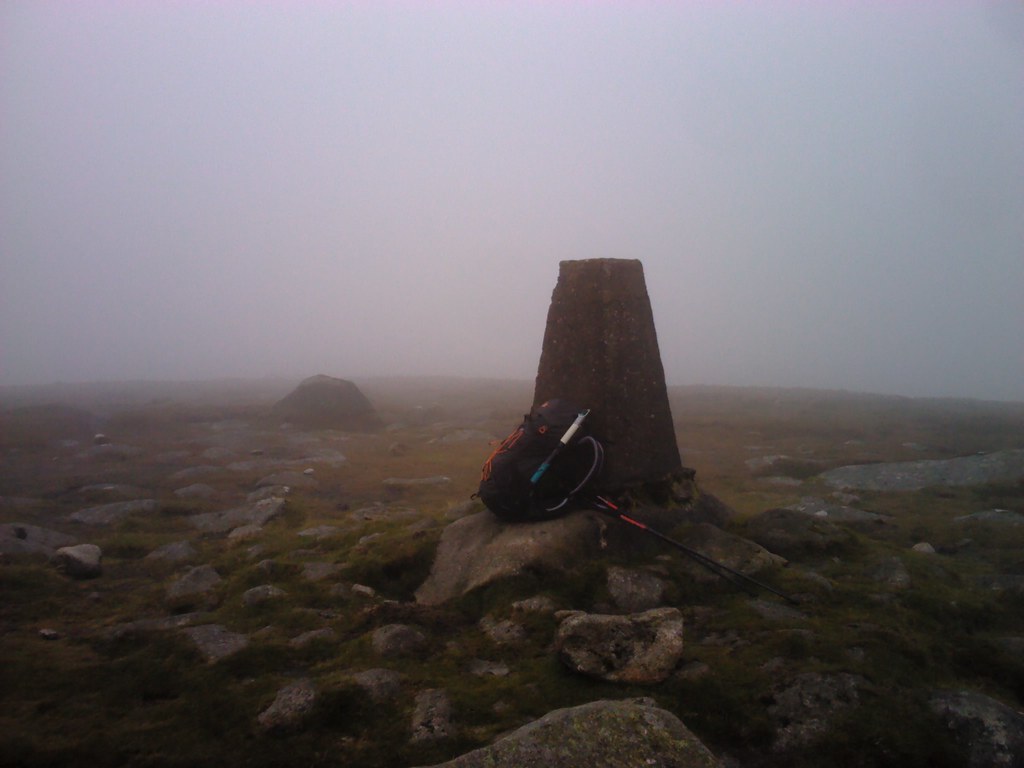 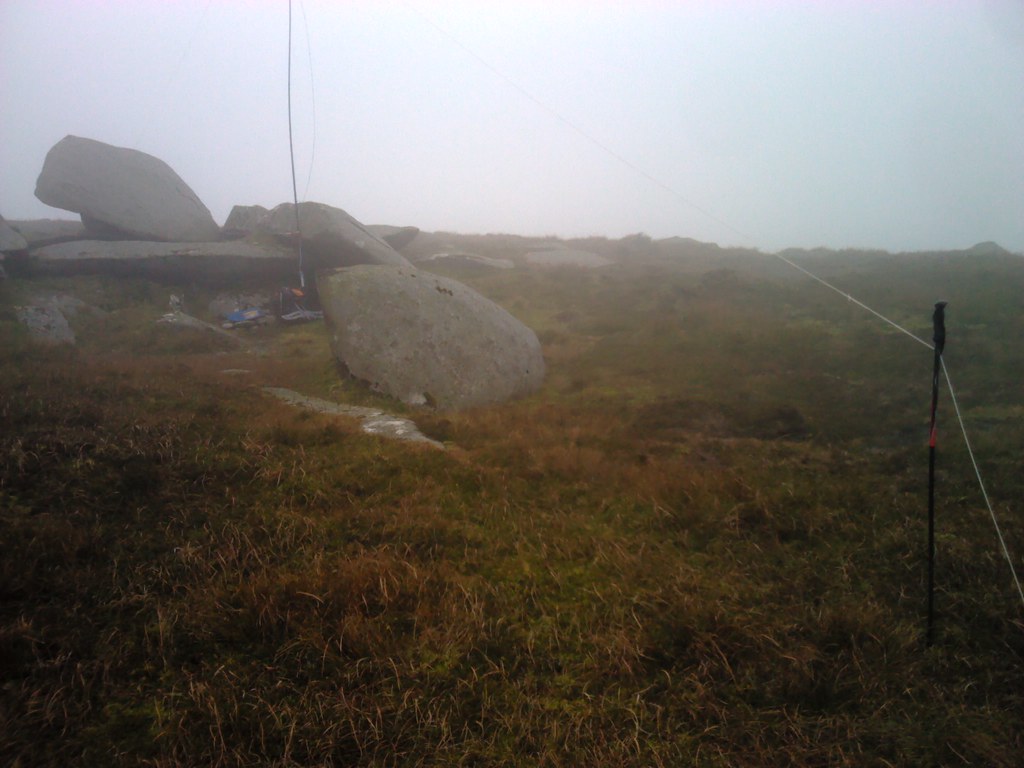 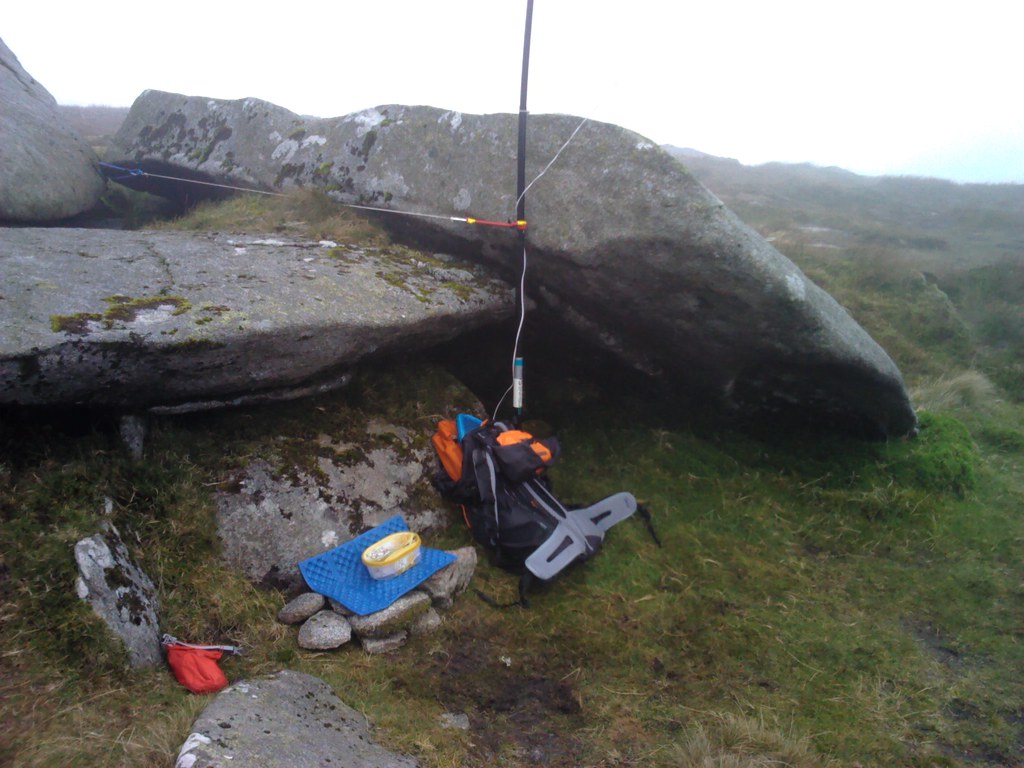 The cloud had lifted by the time I got back to the car, it looks much easier now! : 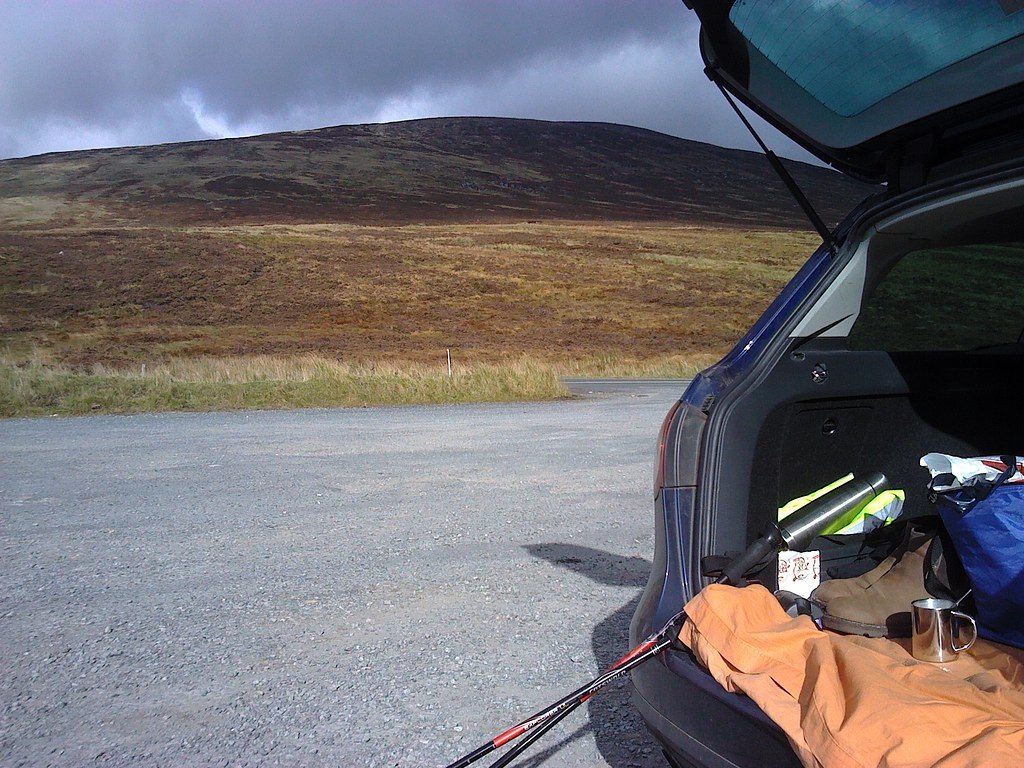 I left my last target until Wednesday, as the weather was set to change. Kippure EI/IE005 hosts a TV mast, and so has a tarmac track to follow. This proved to be useful, as the walk up was entirely in low cloud. The gradient is relatively gentle, and made for a very pleasant hour long walk. I set up just outside the round stone gateposts with the “no entry beyond this point” notice, from where the mast was invisible through the cloud, though I did spot one of the guy line anchor points. Just as I arrived, it started raining. A bothy bag activation followed, but the rain obligingly stopped just in time to pack up and walk off.

Operating position - not often that a SOTA antenna is attached to a crash barrier, I guess: 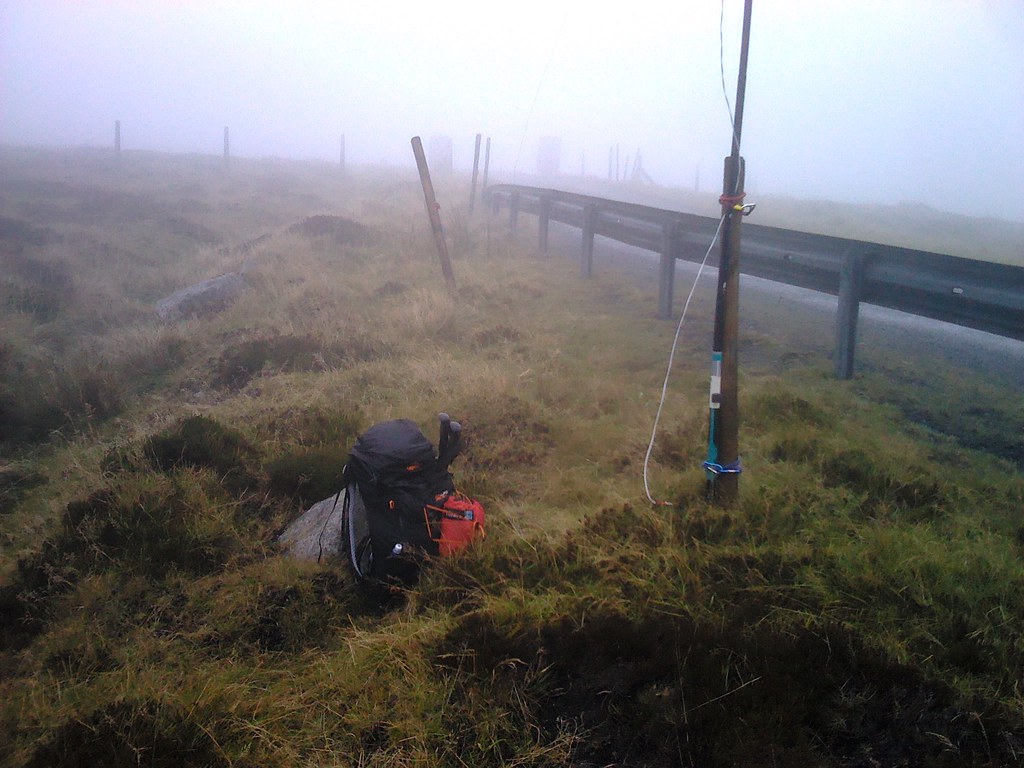 Here is the notice, it is attached to one of the gateposts by a generous length of chain, and tells of considerable wind battering: 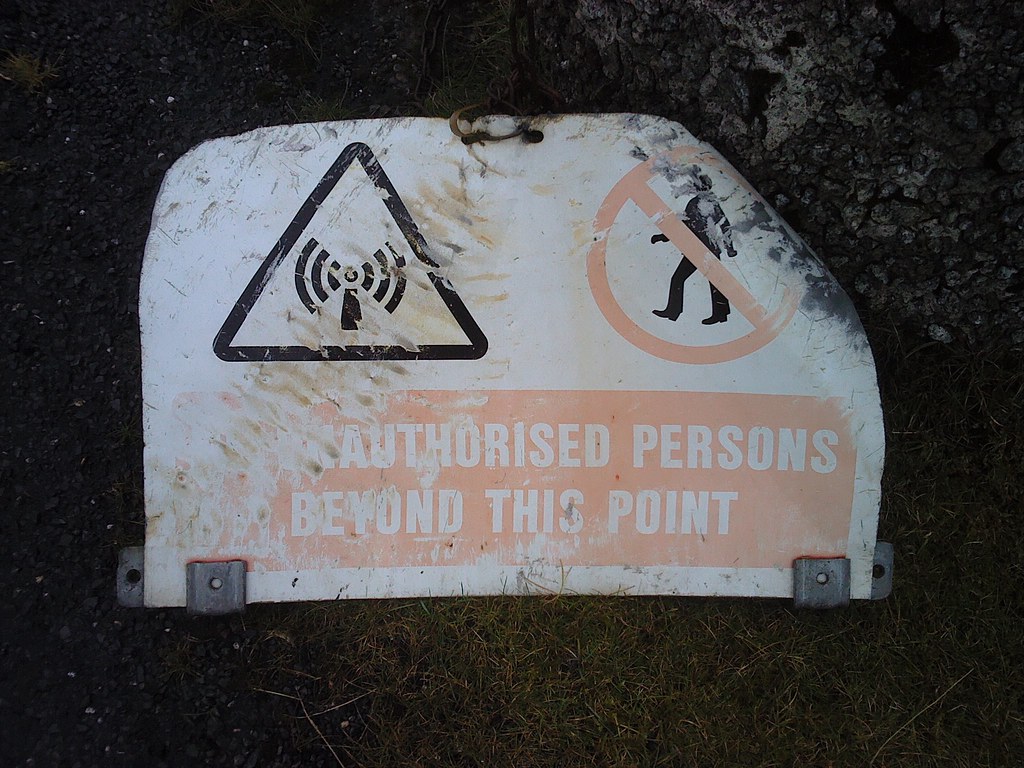 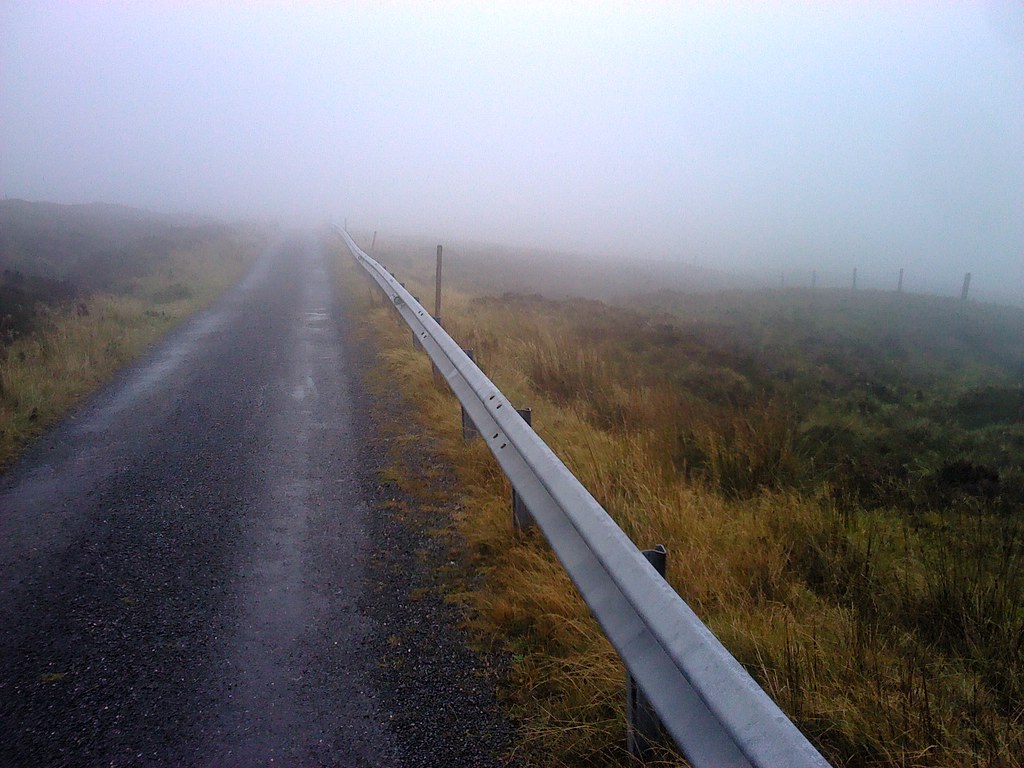 A break in the cloud, nearly there: 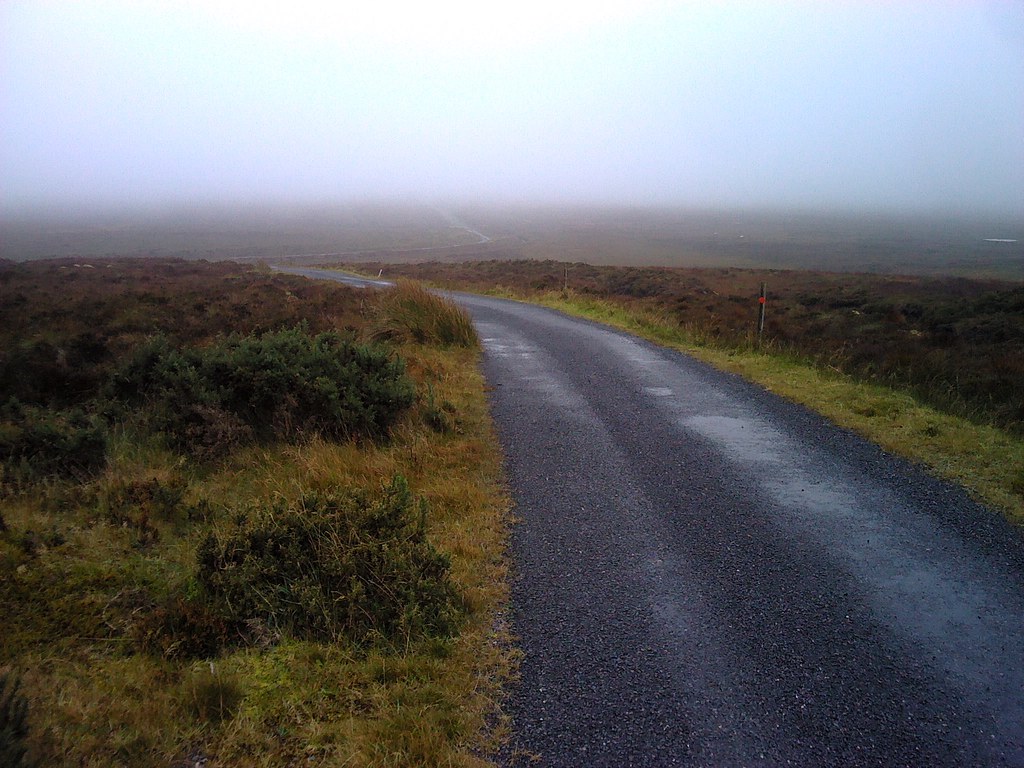 After Kippure, I drove a few miles back over the Sally gap to Sorrel Hill EI/IE014. By now the sky had lightened, and the walk up through the heather was untroubled by cloud or rain. Again, plenty of room for antennas. 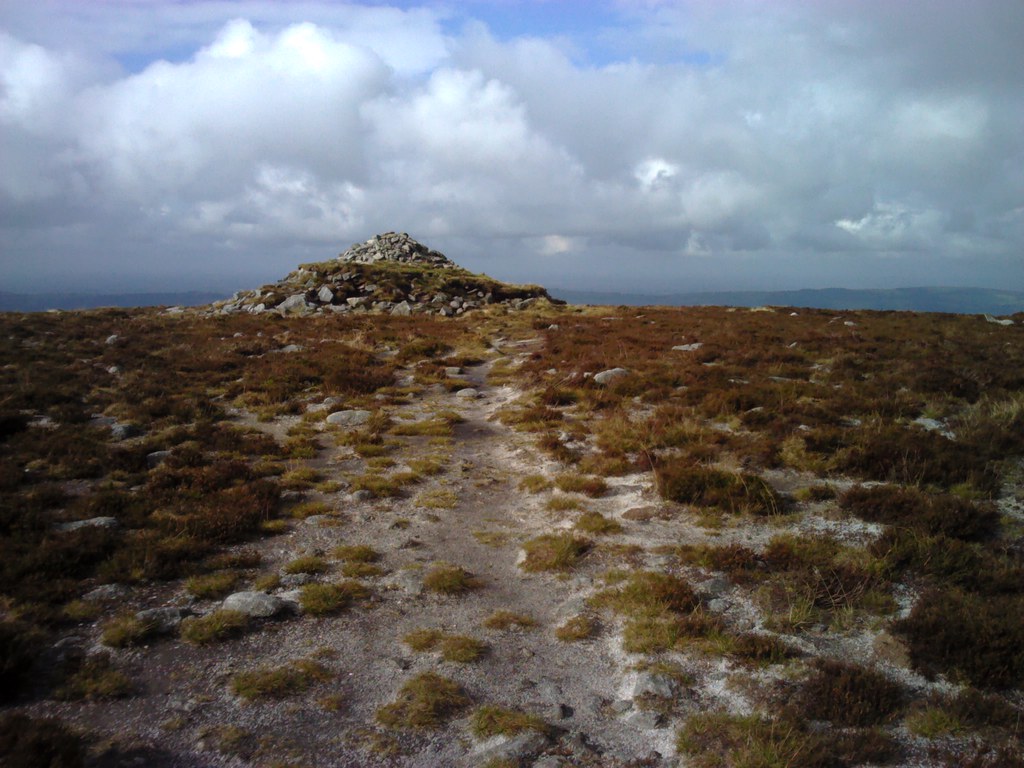 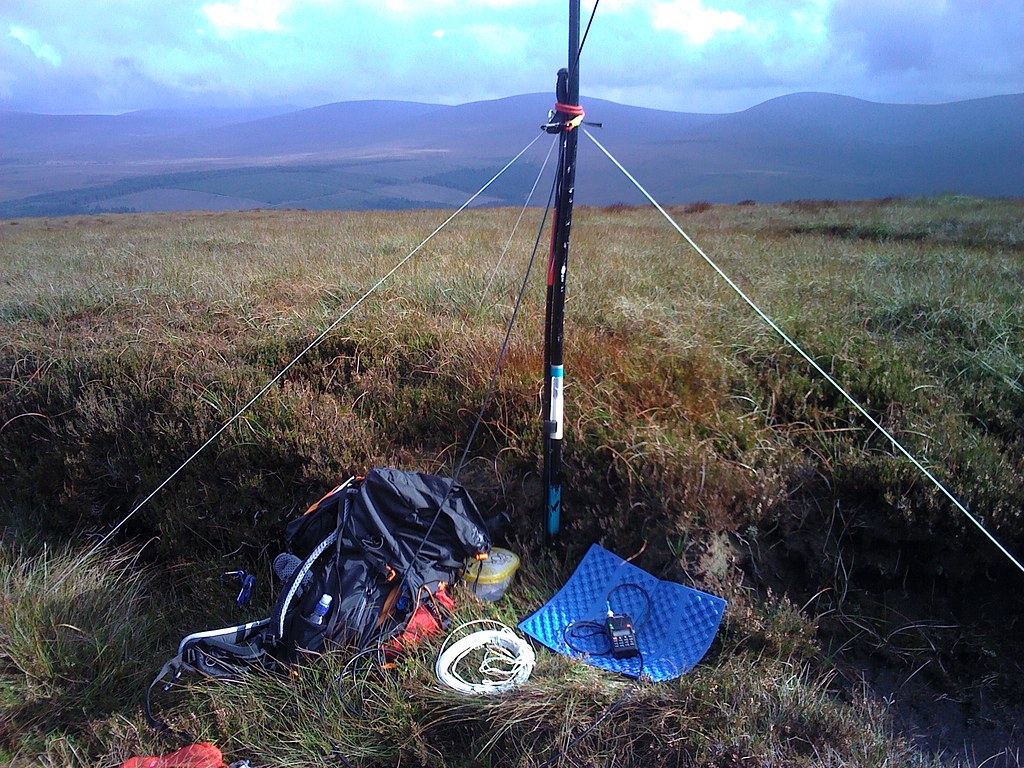 A look back to Kippure (centre), now bathed in sunlight, where the 1000ft mast can just be seen: 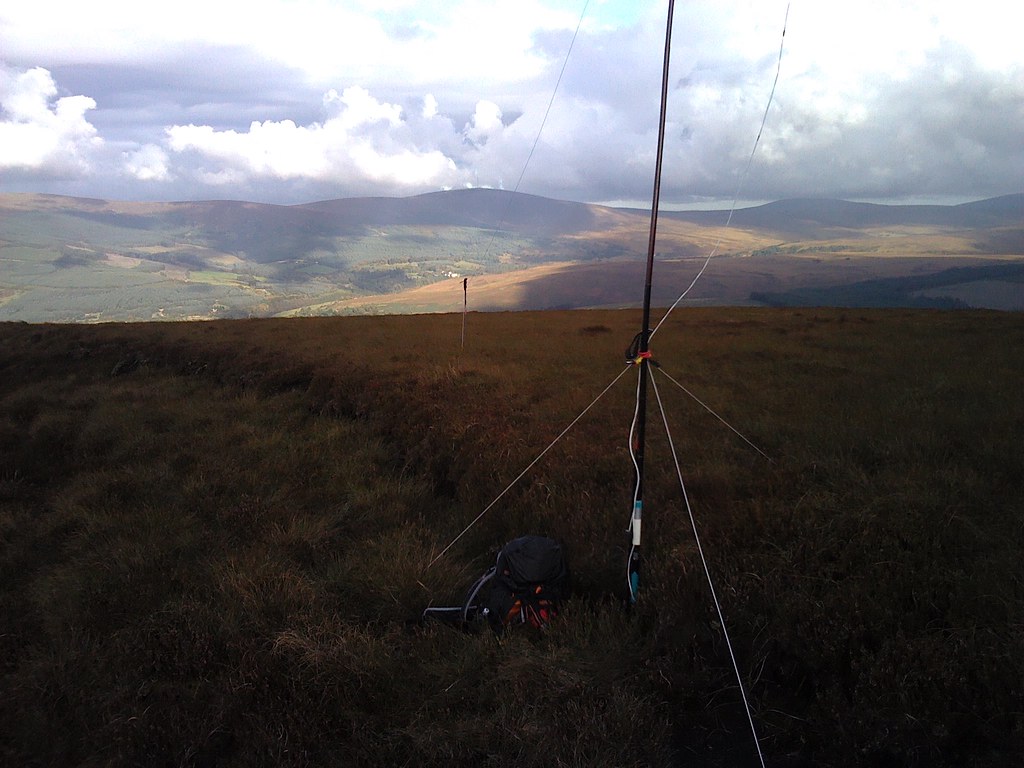 A look back from the car park. When I researched this summit, I was sure that there would be a route up from here, and indeed there was. No path visible on Google Earth, but a well trodden route easily followed on the ground. 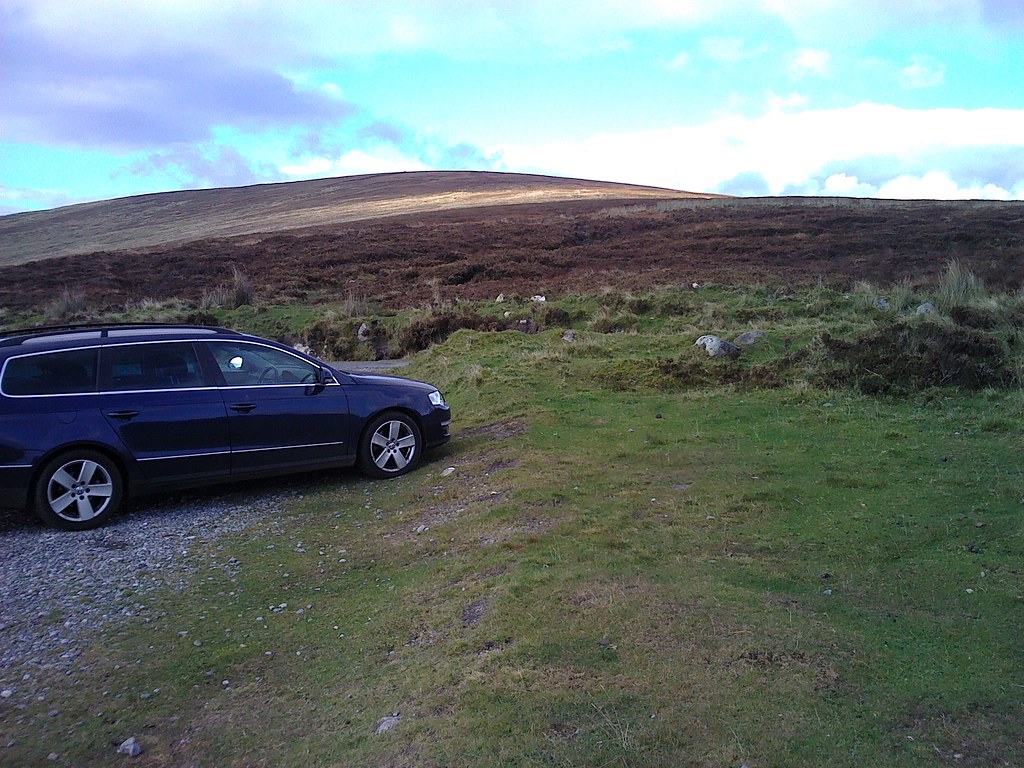 So, that was it. On each activation I used a Wouxun handy running 4 Watts on 2m, to a ladder line Jpole on 5m pole.
This proved to be worthwhile, contacts were made on each occasion, and no interference experienced even beneath the mast on Kippure.
For HF, I used the FT817 on 40m SSB, using just the internal battery, and keeping to the 2.5 Watt setting. I was pleasantly surprised by how effective this proved to be, and although higher capacity batteries and higher output power would no doubt increase the number of contacts, it is an entirely practical setup if qualifying the summit is the main objective. Number of 40m contacts per summit in chronological order: 8, 13, 30, 15.
The antenna was a doublet cut rather long for 40m, and tuned with an Elecraft AATU. Supported on 5m pole at centre, and ends held up by walking pole one end, and local feature at the other!

I intend to visit this beautiful area again some time, as there are many more walks and summits to investigate.
Access to land is a current issue in EI, but within the National Park area, I found no problems.
On the more general issue, I was talking to a friend up country, who’s brother owns a small farm which includes a popular hill (not a SOTA summit). On the entrance gate is a number to phone for access. She explained that her brother was very happy to allow access, but currently, if people go on his land without permission, he can be held liable for accidents. If they get his permission first, then he has some indemnity from Bord Failte (the Irish Tourist Board).
I don’t know how common this arrangement is, but if you see such a notice, please ring the number!

Many thanks to everyone who called me, spotted me, advised me of opportunities for S2S etc, all very much appreciated.

Thanks very much for waiting for us to get to the top of GW/NW-030 Moel Cynghorion for the S2S contacts. It made our day!

Hi Adrian,
Thanks for all the points and the time and effort with your activations in EI it was great to work you on 2mtr FM a few times.