Following a family wedding in Ireland, I took the opportunity to stay on for a few days walking and SOTAing in the Wicklow mountains, just south of Dublin. 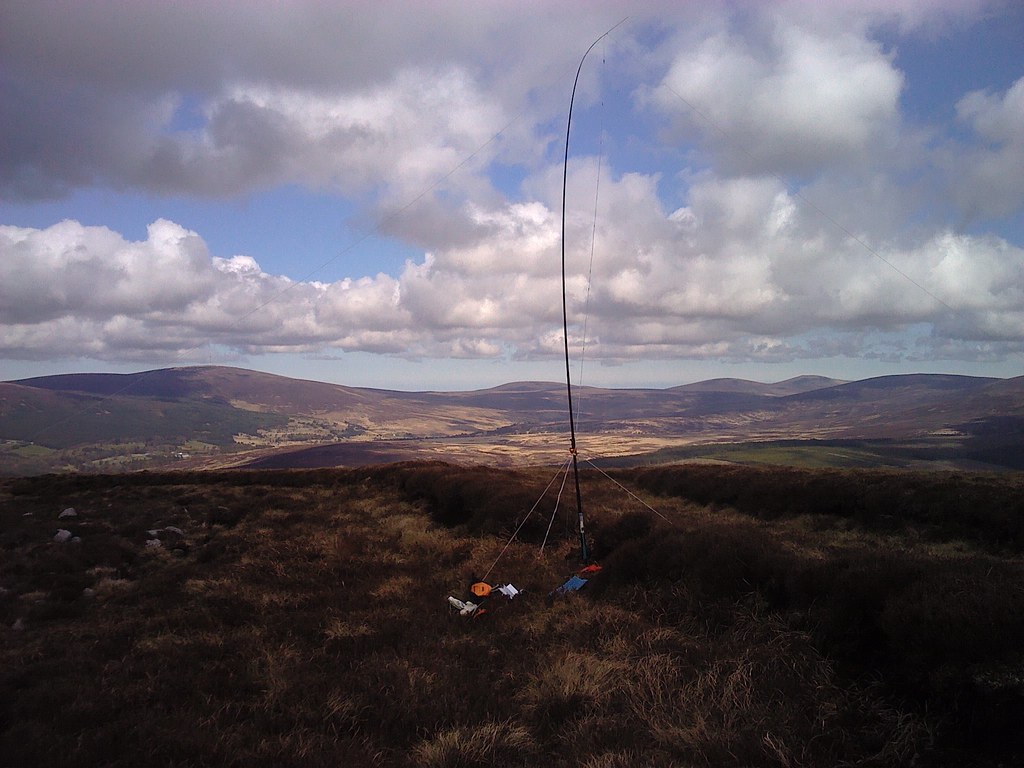 The mountain weather forecast suggested that Monday 30/04/18 was going to be the best day to attempt my primary objective, Lugnaquilla EI/IE-001, and so it proved to be.

The “zig-zag” track leads up out of the valley, and onto the open mountain. The walk is about 7Km, with 800m of ascent most of which is in the first 3Km. A mixture of rough rocky ground and bog, it was quite hard going for much of the way. 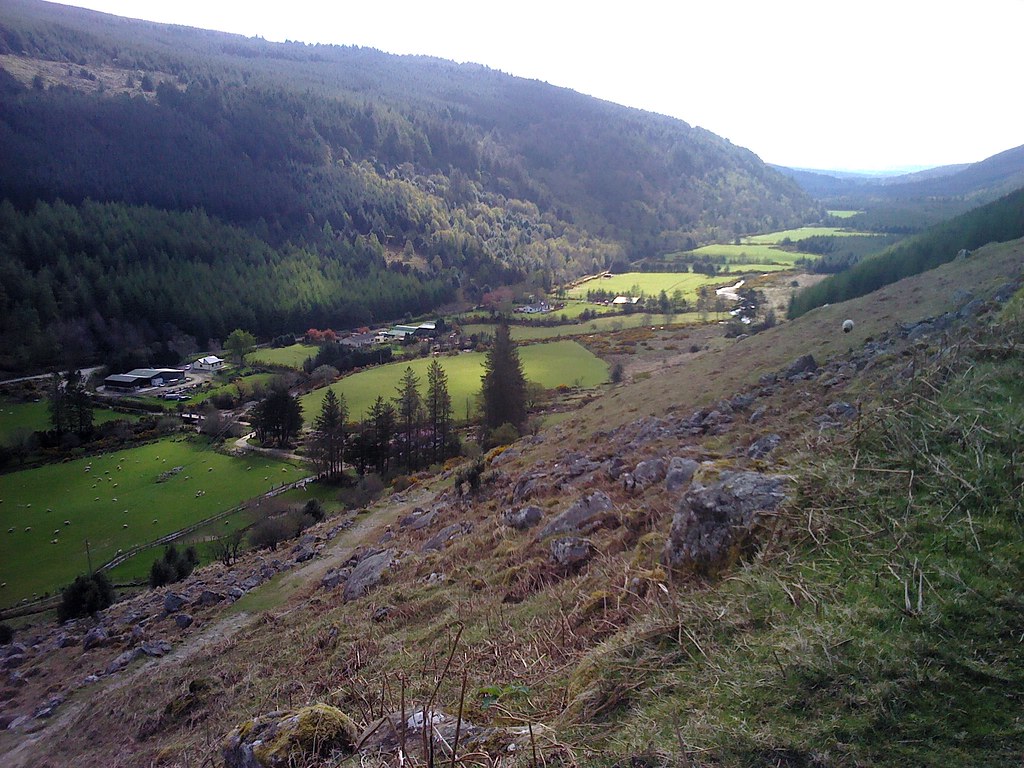 Nearly half way, with most of the ascent completed. The summit visible in the distance: 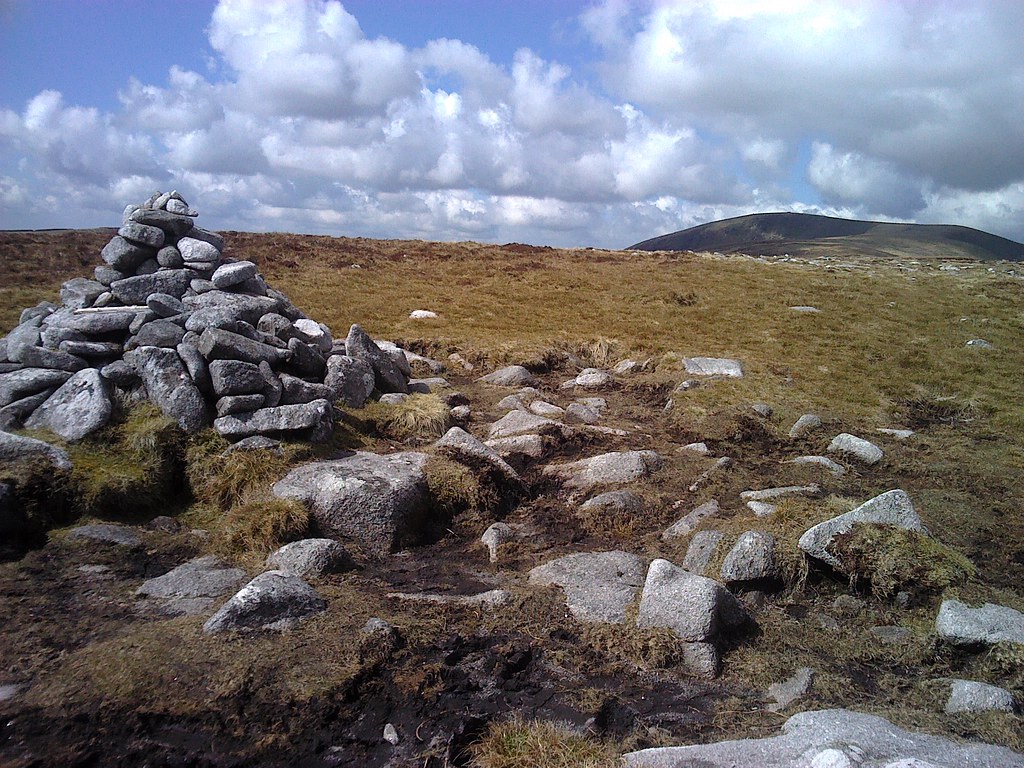 It took me 3 hours up, and 2.5 hours down, including a couple of short drink stops each way.

There is plenty of room for antennas on the large domed summit, but little shelter other than the large cairn. 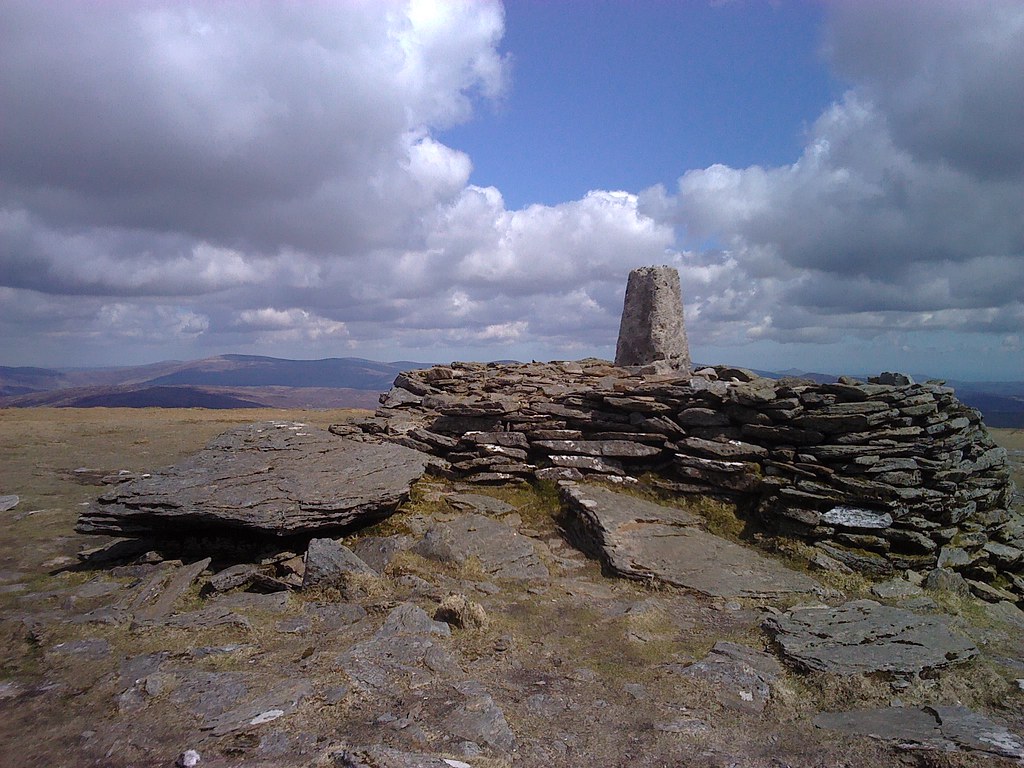 There are suberb views over the Wicklow mountains, the Irish sea, and inland, though it was a little hazy during my visit. 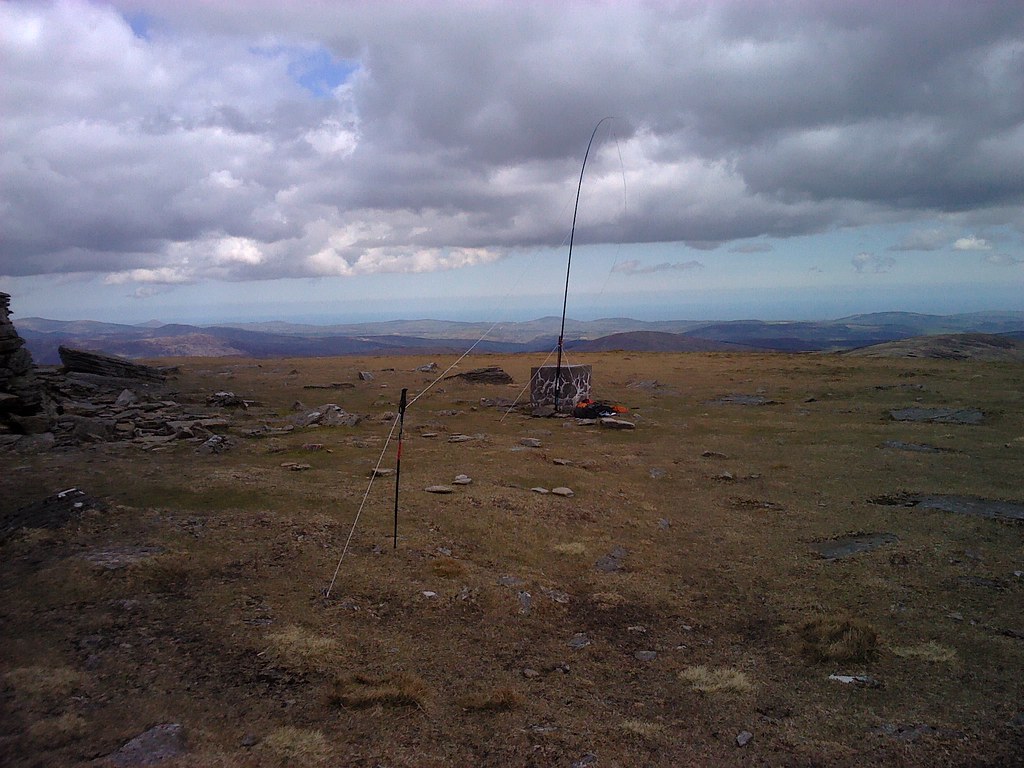 The mountain forecast for Tuesday 01/05/18 was gale force winds building up through the day, so I decided on a morning activation of Djouce EI/IE-007. This was a return visit for me, and is a relatively simple walk up a waymarked section of the Wicklow Way.
Djouce summit: 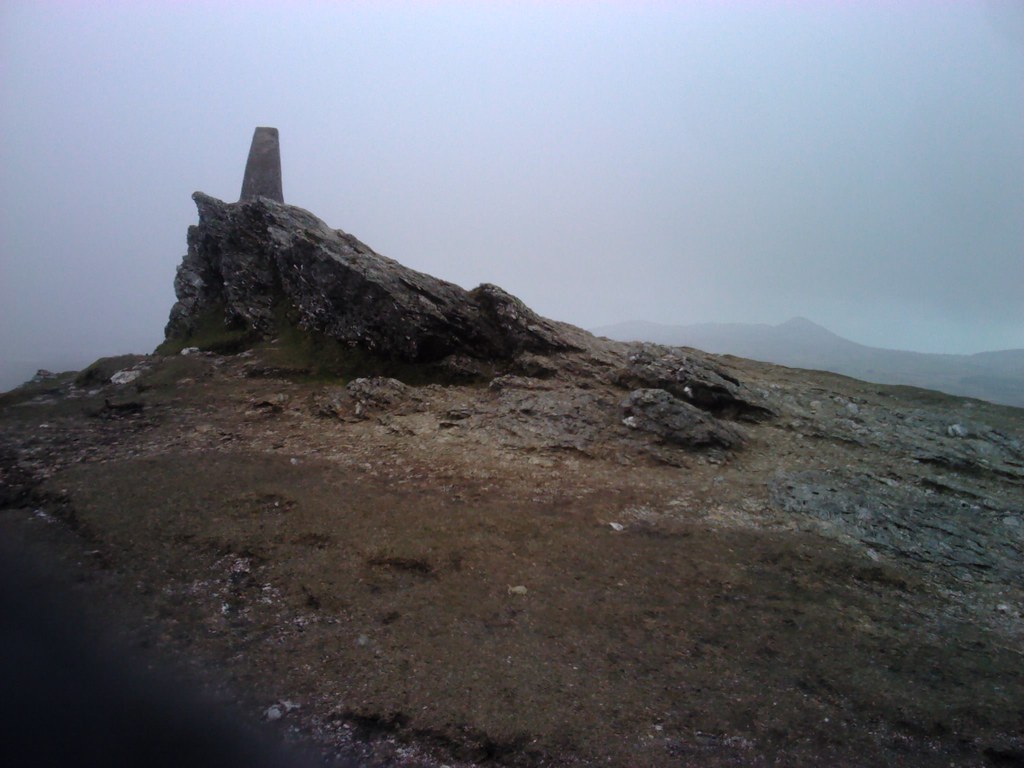 It was windy enough to make walking in a straight line difficult, and a short VHF activation seemed the most practical option. Raising the ladder-line Jpole just above the summit rocks, I managed 6 contacts on 2m FM in 20 minutes. Much appreciated.
Only practical guying option: 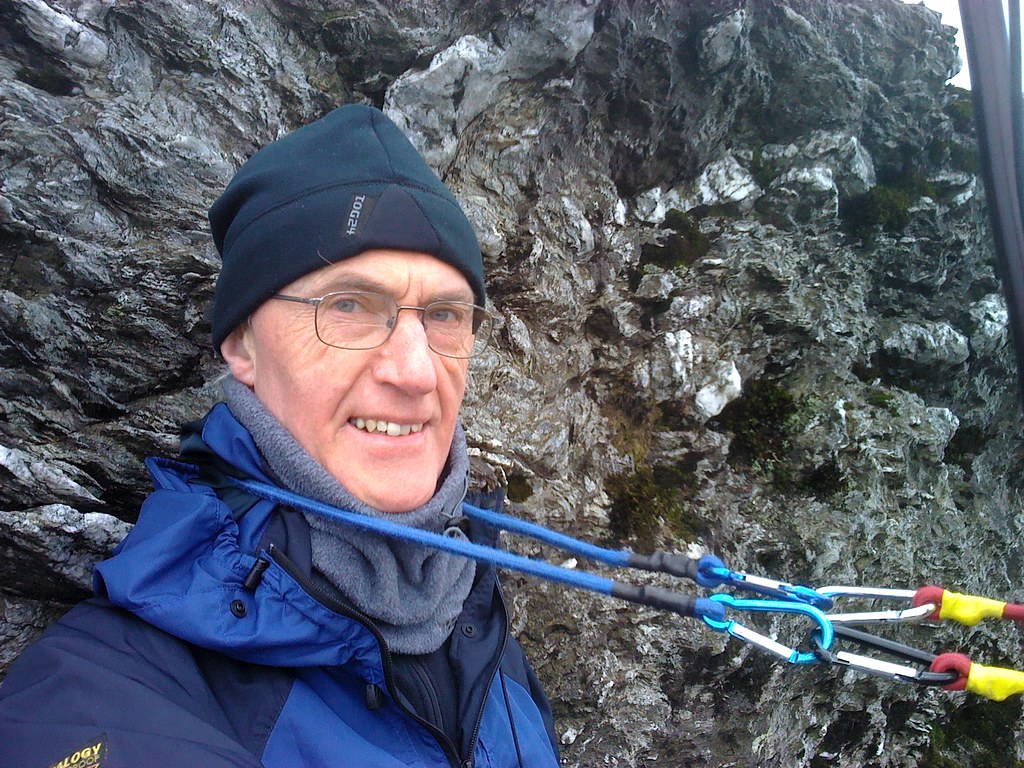 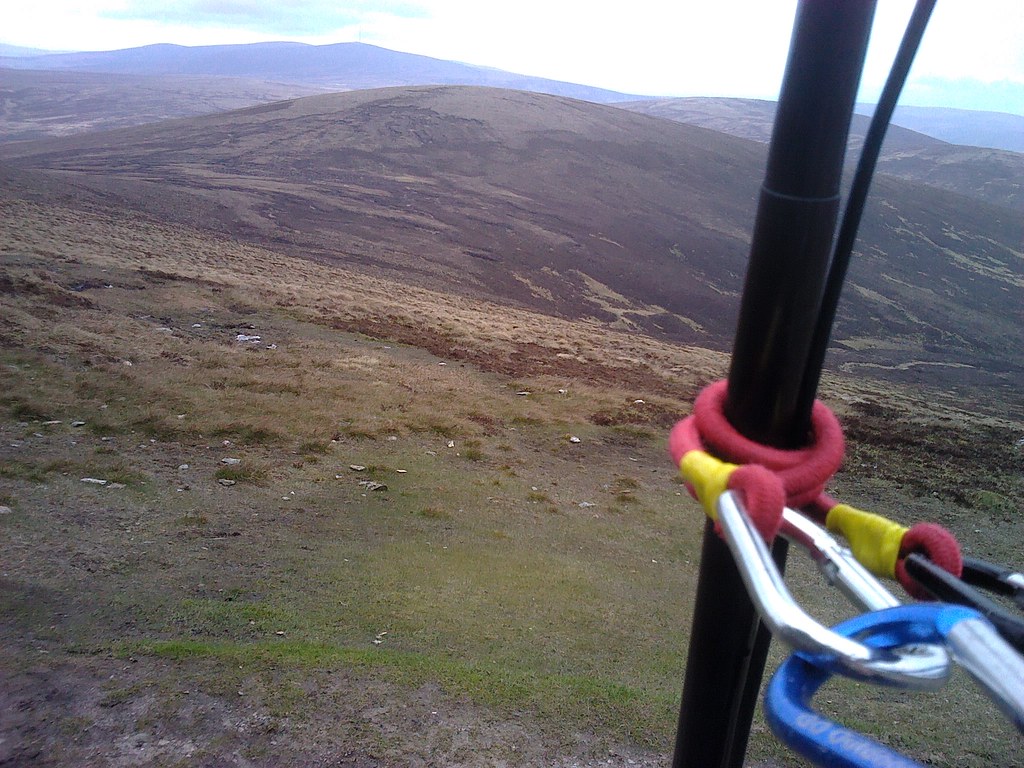 The boggy sections have been provided with a dual railway sleeper walkway, but the crosswind on the way down made this feel like walking a tightrope!

This was a very pleasant walk with a total ascent / descent of 550m. 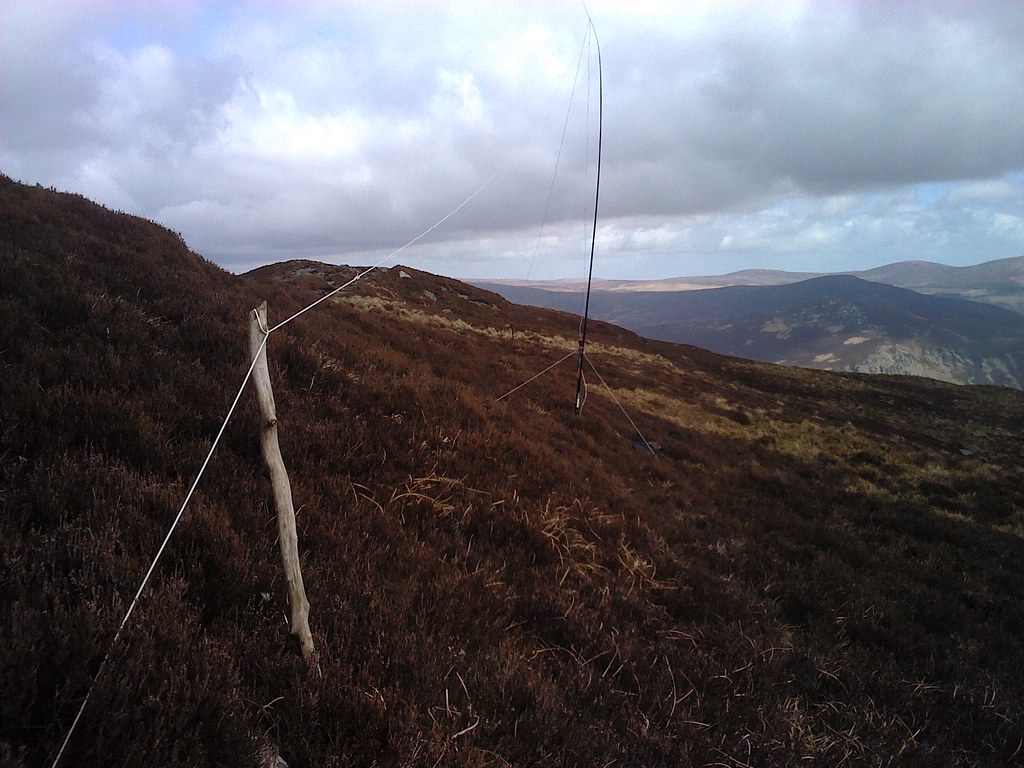 I made 9 contacts on 40m SSB and 8 on 30m CW in about 1 hour. Conditions didn’t seem too good, so I tried 80m.
The antenna I use is a doublet of random length, resonant somewhere between 60m and 40m. The Elecraft T1 tuner matches it easily on 40m and 60m, but not so well on 80m. I spotted and called, but made no contacts. Don G0RQL popped up briefly to say he was listening, which was appreciated - it told me that my self spot had been published, and that I wasn’t getting out! Thanks for trying, Don.

It made me ponder that especially during poor conditions, an efficient antenna is more important than ever, and I may get around to making a linked dipole and dispensing with the ATU on occasions.
Looking back at Scarr summit on the way down, left of centre: 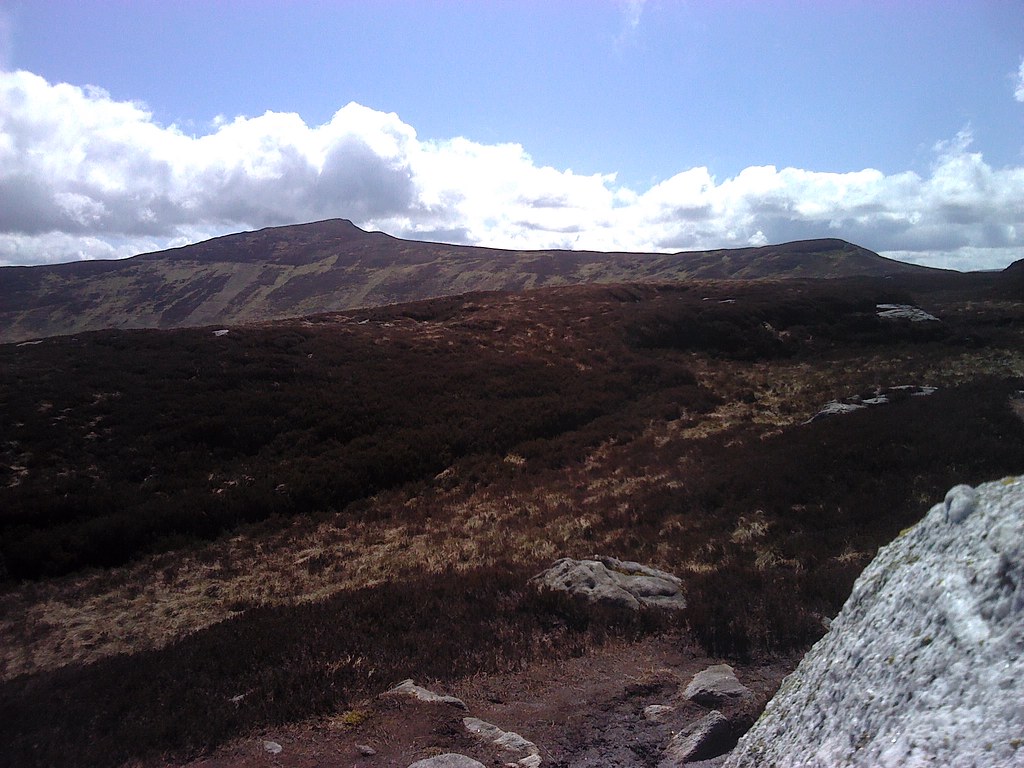 One of the high points for me was seeing my first ever red squirrel, which hopped across in front of me as I was sheltering under a pine tree in the later stages of the walk. Magic, but of course no camera to hand at the time

Except in warm weather, and with somewhere comfortable to sit, I find that an hour is about as much time as I can spend on a summit. Beyond that and my joints stiffen up, and I end up stumbling about awkwardly on the way down, which is not ideal. So, appologies for not attempting more bands, and thanks to all those who took the trouble to call me, much appreciated.

I had monitored the mountain weather forecast leading up to this trip, and it had been predicting gale force winds and snow on the Wicklow peaks. This lead me to consider cancelling, and heading straight back from the wedding to visit the Norbrec Rally. In the end though, the ferry options rendered this impractical, which was just as well, as the forecast improved over time. Sorry to have missed it though.

It wasn’t to be… Despite being on summits at the same time I never heard you from LD…I called on your spotted frequencies quite a few times but nothing heard.

I was hoping that we would make S2S, but I heard nothing of you either. Propagation on 40m seemed very long, and I worked few UK stations.

Thank you for trying, l look forward to the next opportunity…

Well done OM - UNIQUE technique! I know Djouce, but took the easy option of 2m FM as I recall.