Yes Gerald your right there, but its raining heavy now so IB-007 is postponed. I’ll review the sky later for a possible afternoon activation and amend the alert.

Forgot to comment to comment on your post. I had a really high noise level on IB-009 last Sunday on all 3 bands tried and that probably contributed to me not hearing you calling. In the past I have had no problem hearing de G4ISJ coming through on CW.

Weather is still looking uncertain here for today from the hotel looking out to sea - there is a strong wind and frequent showers. If it does not settle later this afternoon I may venture out in the car to IB-010 instead, near St Eularia and about a 30 minute drive. Activating this summit would mean a shorter walk from the car. My map shows properties near to the summit, so there may be more shelter there. I did buy a fold up umbrella in Decathlon yesterday! We’ll see…

Two successful activations this afternoon. The first EA6/IB-011 (unique) was excellent, a 35 minute walk on a rough track and path to the summit of Puig de se Terrets. 39 QSOs completed including an S2S QRP 2 way SSB QSO with Rod M0JLA of Hereford, who was on Winter Hill, a summit I have an affinity with as it is close to the place in Lancashire where I lived until I was in my late 30’s.

Does anyone know what this rusting machine is? It was sat by the track half way up to IB-011, possibly connected with forestry or quarrying maybe: 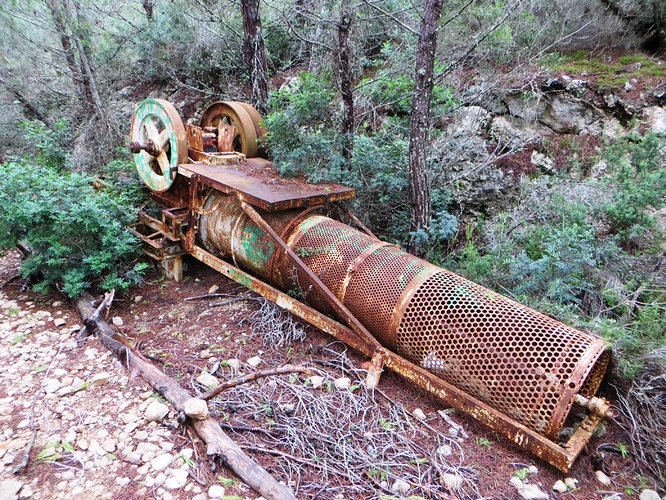 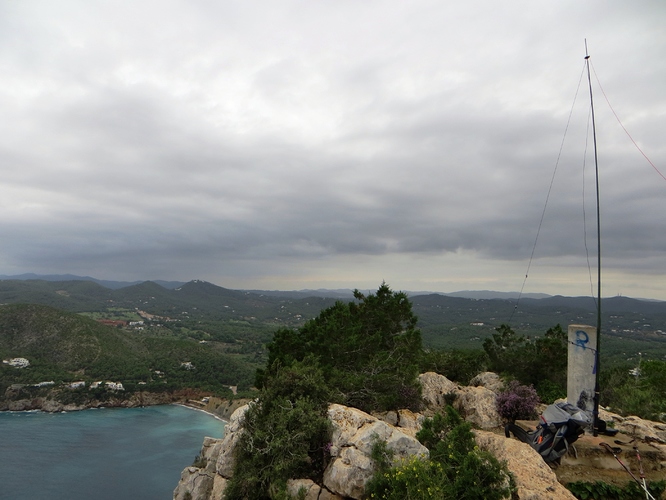 After this super experience we went to what I thought would be a “drive on” summit EA6/IB-010 Puig d’en Pep. It turned out to be far from it, and was quite an adventure, hence I was very short on my QSO chat, names etc, please accept that I had to make the activation as quick as I could in the shortest time possible . It was approaching dusk when we arrived at the villa gates on the summit after a hair-raising frightening ascent (XYL that is) in the Renault hire car. Yes, someone had built a villa on the top, what a bugger… You can see it on Goggle Earth. After seeing the gates to the villa and the owner going out in the Range Rover, as I blocked the road, wondering where to go next, I almost gave up, but I then drove back down the hill to the next hairpin where I could park. The villa owner passed by… From there we walked up some scrub land for about 500m, past an abandoned Open Vectra and I climbed up to a point well within the activation zone to set my antenna pole against the back security fence to the villa, where I set up the QRP station. Headphones were in use ( I don’t usually bother with them on activations, only in the home shack usually, but as you could have heard a pin drop and I did not want to arouse interest from the villa dwellers of my presence I thought this was wise… 25 QSOs were completed on 30m and 20m where I perched myself against the fence on a loose earth bank. It was going dark after the 20m CW work had passed, and the XYL had certainly had enough, I had also had enough, especially when I tried to self spot 14285 using RRT and the mobile link went kaput, I called CQ twice in a low voice, and no one responded, so I decided that was that and I pulled the plug, N4EX was worked from this summit for ODX at around 559 on my side. Both summits - Yaesu FT-817 and link dipole - 5 watts. 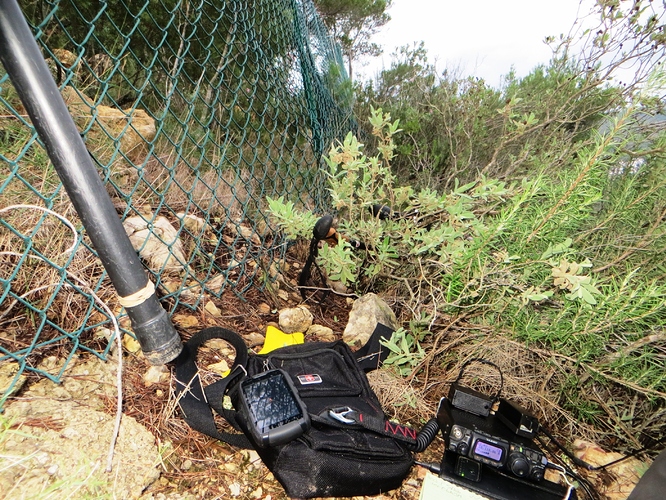 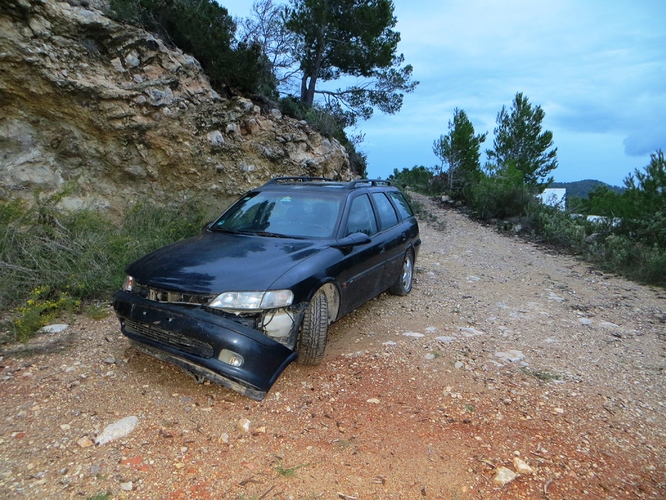 I hope to do one summit tomorrow, WX forecast says morning dryand PM wet so we’ll see how it looks when we draw the curtains in the morning…AM is likely. Watch the alert list please.

Thank you for the report. Hope Wx will be better tomorrow!

The machine should be an old rotating sieve to select limestone (gravel) in order to mix with cement to produce some sort of concrete. Also usable to make paved roads (macadam roads).

Thank you for the information on the machine. I imagine where it was the workers used it to produce gravel which was then transported down to Cala Llonga, about 1 Km down the hill where there are roads and houses where the concrete and tarmac would be needed.

Weather is not good in Ibiza at present - rain and winds again today. I’m considering doing an activation once I’ve had breakfast and looked at the latest weather forecast to confirm it is good to go out.

The activation on Formentera EA6/FO-001 will be either Thursday or Friday depending on the weather.

We will leave the hotel at 0900z and head for EA6/IB-007 Talaia de Sant Joan. If the showers hold off we will set off from the parking place and attempt the activation. 14.062 MHz first, sometime around 1030z.

For those watching here - Phil just posted the following:

Looks like you’ve been very unlucky with the weather - perhaps you can find another nice cafe until the weather gets better.

I bet you it’s not raining but Phil was out till 6am dancing to some bangin’ beats at a foam party with a couple of light sticks in his hands. This WX is an excuse to chill out, the beat has stopped banging but Phil’s head hasn’t

Whatever the reason, it gives me a better shot as of 1015utc, I’ve finished work for the week

It would be nice to get Ibiza in the log, I will be eyeing the spots carefully today and tomorrow.

The things you can get away with in a foam party, glad I am still young.

Only parties I went to when I was younger involved Jelly and Ice Cream.

Yes Gerald, I think we have about the same weather as you did in Menorca last week.

Ed - yes, a local cafe in San Vicenc did us a nice Pizza to share.

So here is the revised plan…provisional and subject to change or cancellation if the weather forecast is wrong… No operation today as it is still coming down like stair rods on and off.

We decided we are too old for foam parties and it’s too cold, so tonight its “Back to the 80s” with a Frankie goes to Hollywood tribute act (Live guitars and keyboards!) in our hotel. The final live artist performance of the year we are told. We are two of only 4 English guests in the hotel now and the rest are German.

We change hotel for one night and go to Santa Eulalia before heading home. An activation is unlikely that day. Home Sunday, looking forward to greeting our dog again… 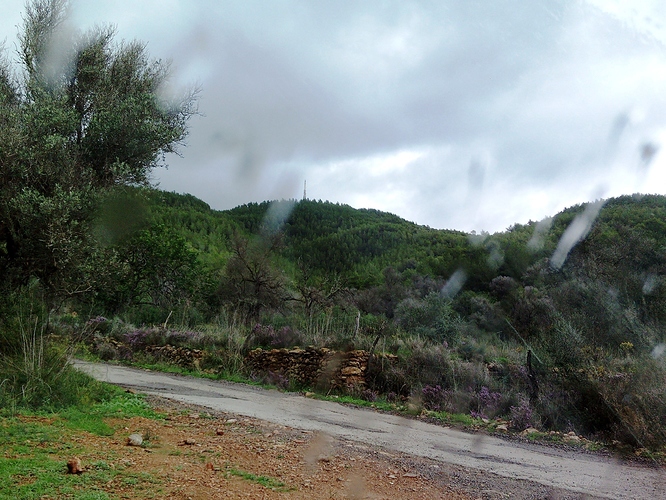 Thanks for highlighting my non-spot Ed - I will delete it now. When I sent that from the car I took this picture of EA6/IB-007 through the side window, when I decided setting out was a none starter - then the rain got much worse and we drove back to Cala San Vicenc on flooded roads. I reckon the summit of Talaia Sant Jorge is where the mast is. I should be there tomorrow morning…

Thanks for the update Phil.
Will listen out.
I am too old to know what a foam party is so did not comment

Will try to look out for you tomorrow Phil. I put the dipole up as soon as I can then just keep an eye on the spots.

Thanks for highlighting my non-spot Ed

No worries Phil, a good example of where THE ACTIVATOR can let the chasers know when plans change.
Glad to hear you found somewhere to share a nice Pizza.

By the way, regards to the (long suffering) XYL and condolences on the weather not working out.

I’ll try and catch you tomorrow afternoon (If the weather is better with you) as I won’t be near the shack for most of the morning.

Phil’s FT 817 has developed a fault and is refusing to transmit on SSB.

(Nick G4OOE - if you are reading this can you post the procedure here for a hard re-start on an FT-817pse?)

In order to attempt work the Non-CW chasers, once the callers have ceased, Phil will then move to 14.285Mhz and send CQ SOTA at a slow 12 wpm IN CW AND LISTEN FOR A REPLY IN SSB (USB).
If a callsign is heard he will send RRR and your callsign and Report in CW

So all you have to do is recognise your own callsign sent slowly and reply in SSB with a report.

P.S. Unfortunately it could be the microphone insert that has failed and if so, a master reset wont help.

Oh what a shame must been right frustrating for him, let alone us.
Putting in good signal too here. mind you so were others in C/W.

Just sorted out me better version of me Inverted L 40m 1/2w portable antenna too.
Seems to be working well reaching couple QRP’s in OE including a Sota on 20m.

Oh well luck of the draw

may be next time