This sequence of hills is a popular outing within the seasonal bonus period. Reasonably accessible hills, walks all either easy or at least straightforward, and the bonus amounting to a massive 150%, magnifying the ten points to a bumper 25.

I loaded the postcodes into the car satnav the previous night, so I was ready to go first thing. I was away by 0520 UTC, and less than half-an-hour later, having breakfast at McDonald’s in Congleton. But that wasn’t the dreadful start to the day, as uninspiring as it was.

No, that came on the A442 at Halesfield, near Telford. I was in a queue at a roundabout when BANG - I got smacked in the rear by a white Ford Mondeo. I was gutted - my Dacia Duster is barely 18 months old, and thus far unblemished. Anyway, it looks like only the rear panel of the bodywork was cracked, so no seriously mechanical damage. Plus, I wasn’t injured. Better still, the other driver admitted liability fully and immediately and got straight onto her insurance company, who started making arrangements for my vehicle repair and courtesy car there and then. So it really could have been a whole lot worse - something I kept reminding myself of throughout the day. 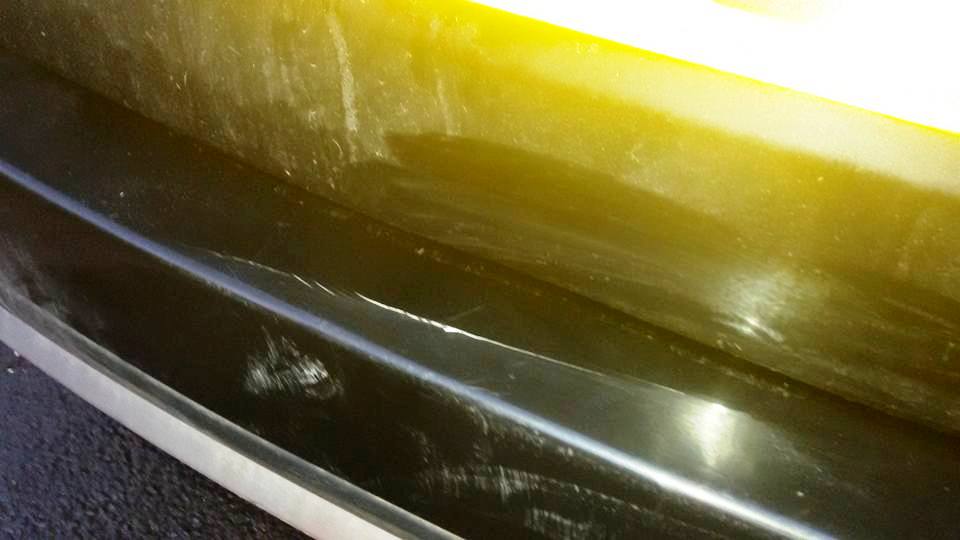 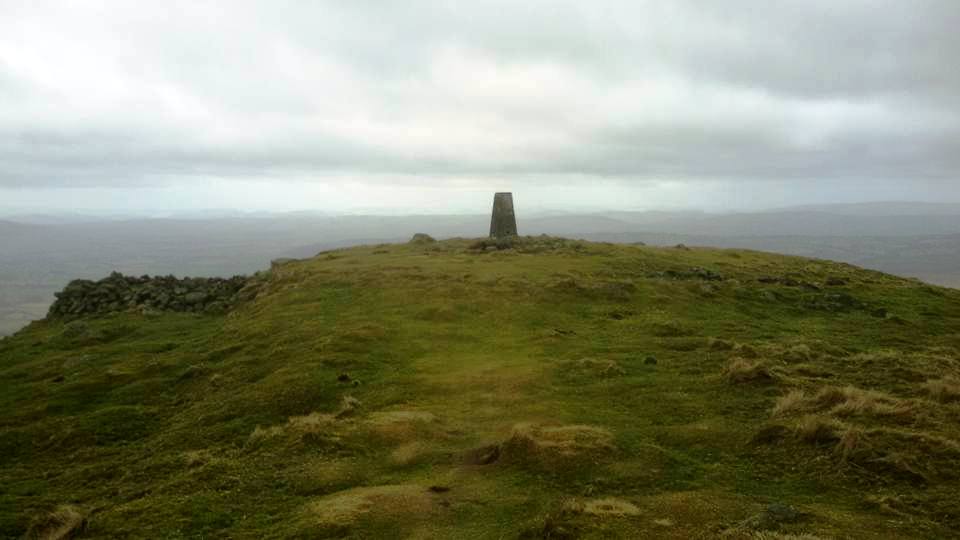 Back on the road, I made my way to Titterstone Clee Hill G/WB-004. For this one, I’d put an extra postcode into the satnav route, in order to ensure that I approached from the A4117 to the south, and not the more direct but heavily potholed lane from the west. For as much as I could, I’d intended not carrying a rucksack for the day’s activations, just taking handheld in pocket. I figured that there would be plenty of breaks and opportunities to eat and drink. 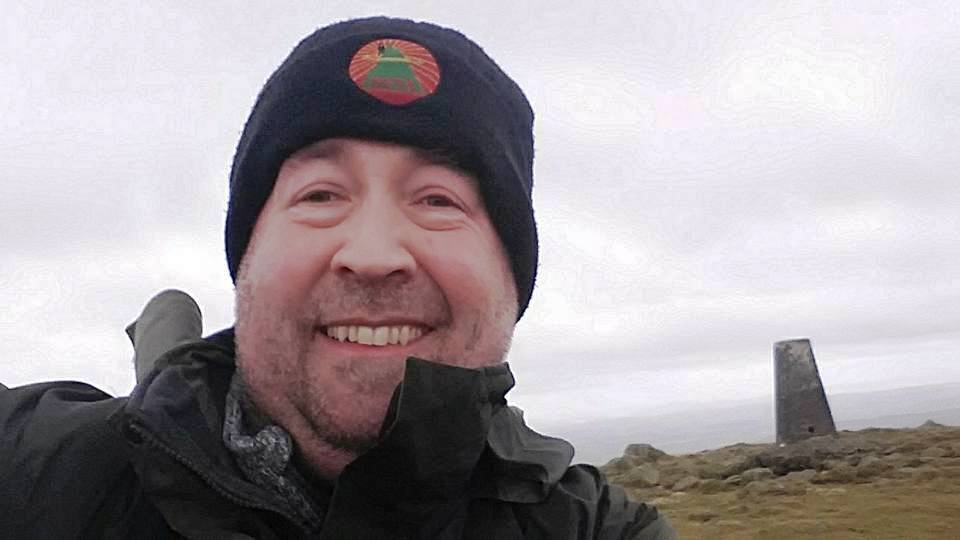 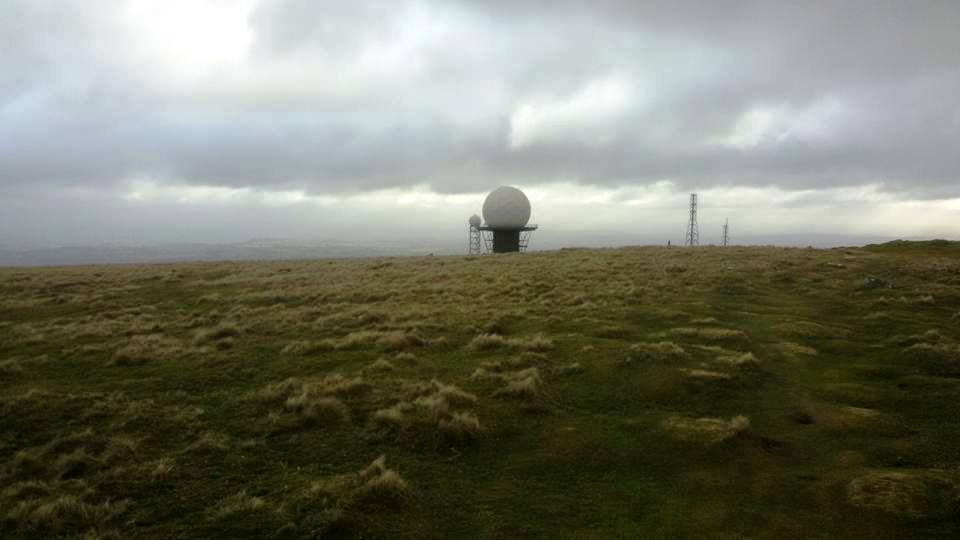 The handheld-only strategy was fine for this first summit - as indeed it was for the rest through the day - and I made six QSOs - four on 2m FM and two on 2m C4FM. I wasn’t bothered about hanging around too long anyway - for reasons of the five summit schedule, the charge level in the handheld (even though it would be recharging in the car between each summit), but moreover the icy wind, which added a genuinely bitter quality to the cold.

Next up was Brown Clee Hill G/WB-002. I parked by the grit bin at the bottom of the steep, straight Shropshire Way approach to the summit. 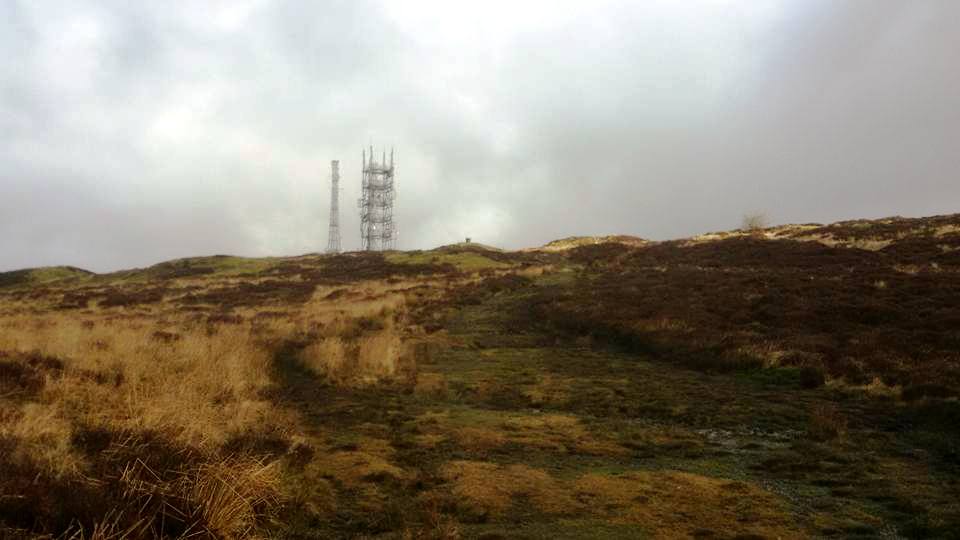 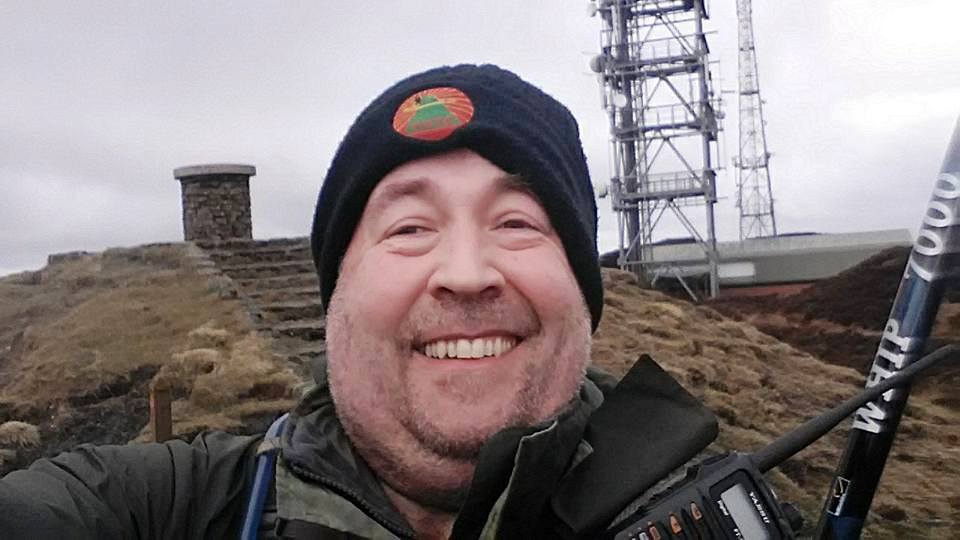 For this one, I did chuck on the rucksack. I wanted to have FT-817 and HF antenna in case the recently reported commercial mast QRM proved as disruptive as described. It would be the only summit of the day for which I wore a pack. 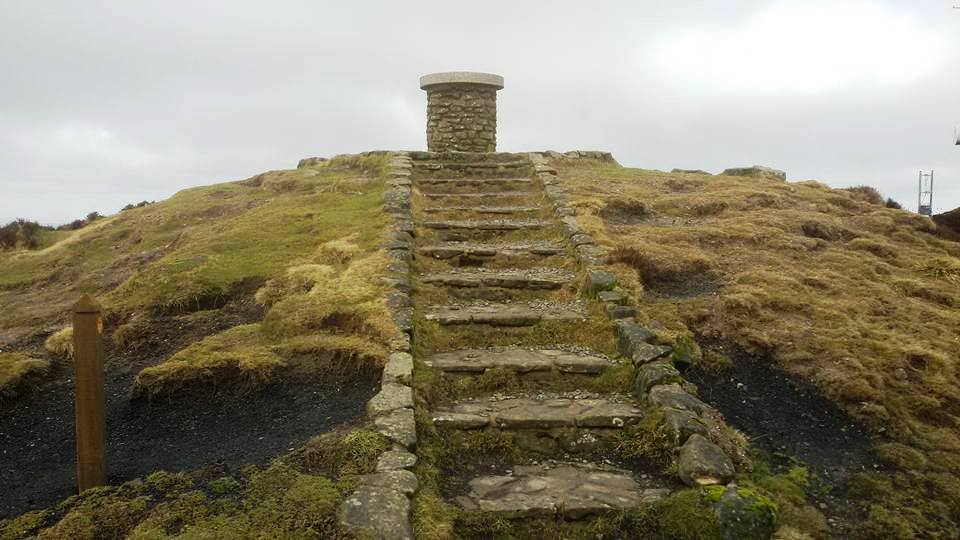 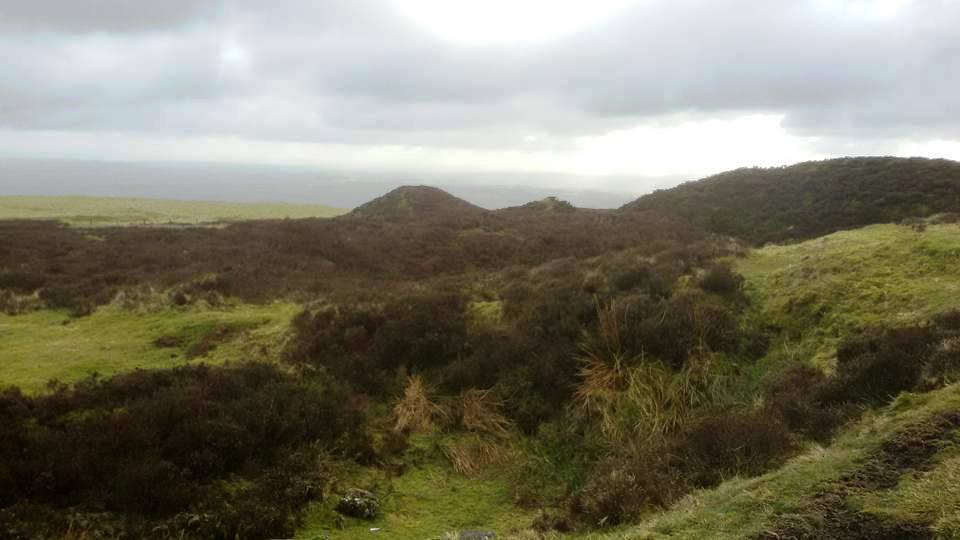 The next summit was Long Mynd-Pole Bank G/WB-005. The easiest walk of the day, but the drive that I don’t much care for. Driving up the Burway is a proper white-knuckle ride of car journeys! I parked just west of the summit and used the easy approach up the wide track. 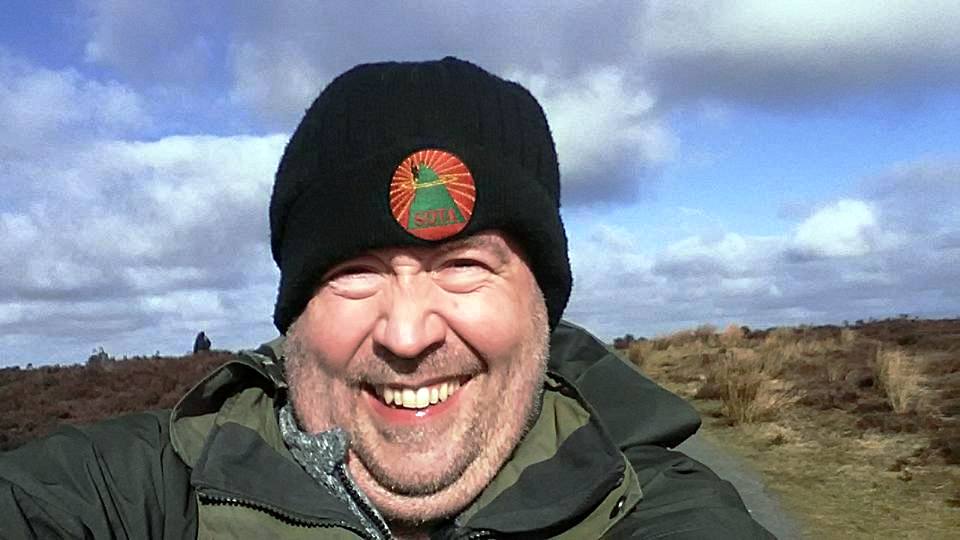 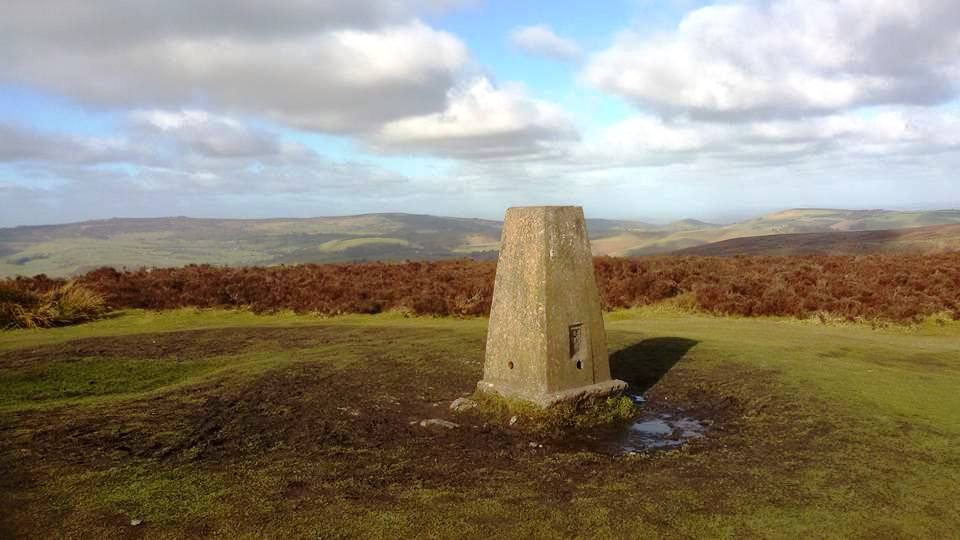 Just four QSOs from this one, three on 2m C4FM and one on 2m FM. The drive down to Bridges from here is the least traumatising of the three roads on/off the Mynd, but still demands proper concentration in a couple of places. 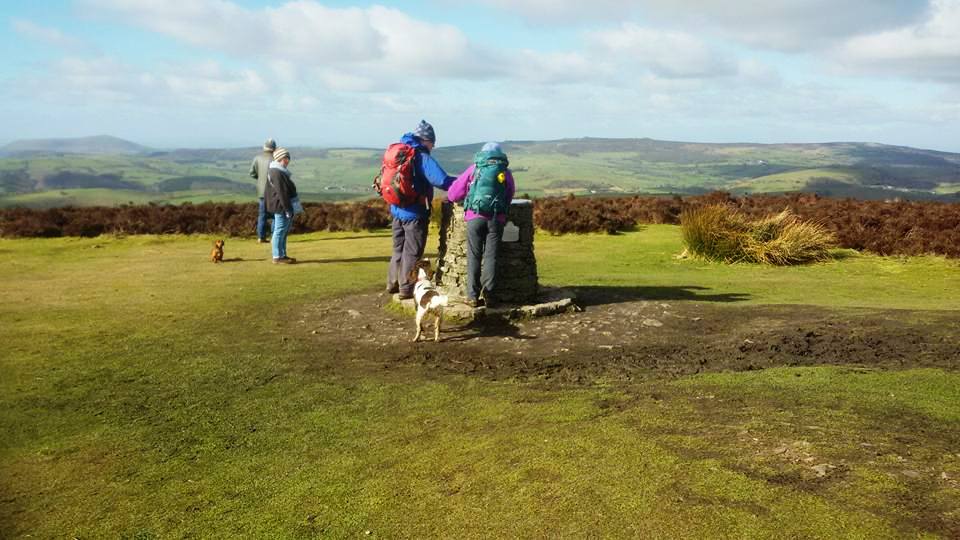 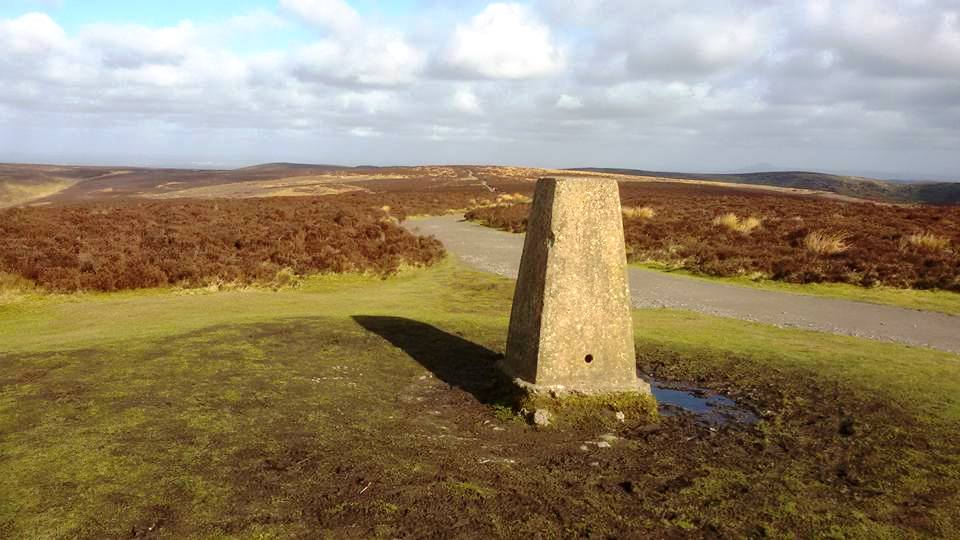 So next was Stiperstones G/WB-003 from the main car park. This one always seems to be a bit more demanding than expected, possibly linked to being the fourth summit of a day. 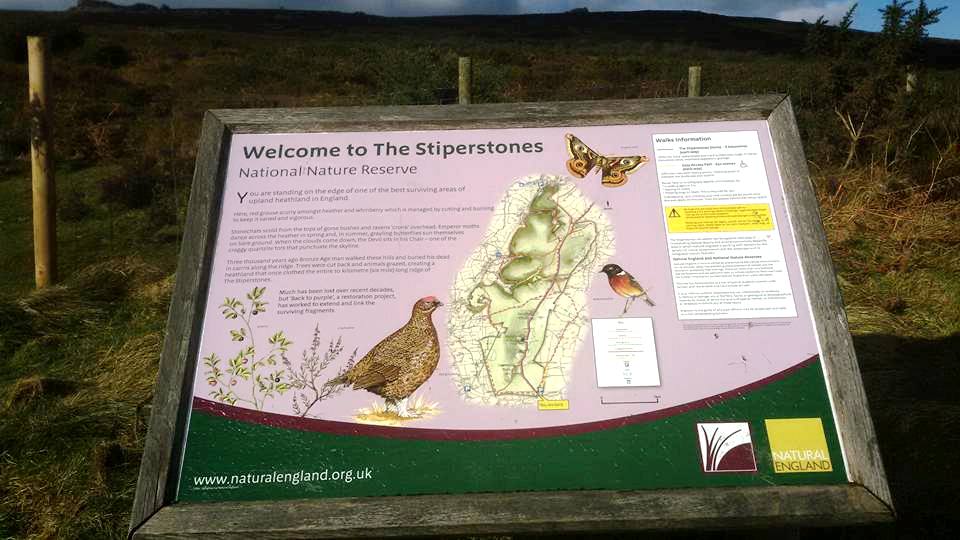 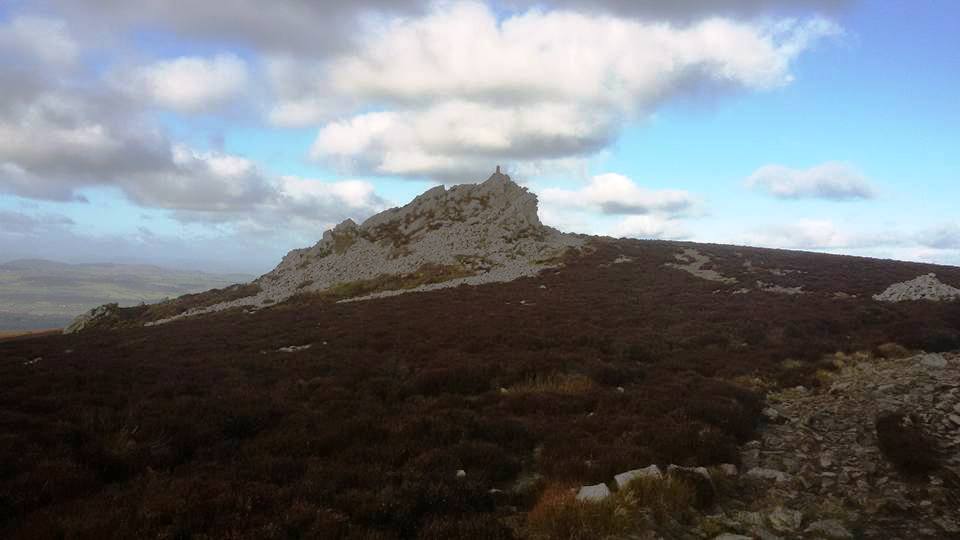 As usual, I didn’t climb to the trig point, but used the rocks beneath it to shelter me (and my microphone) from the prevailing wind. 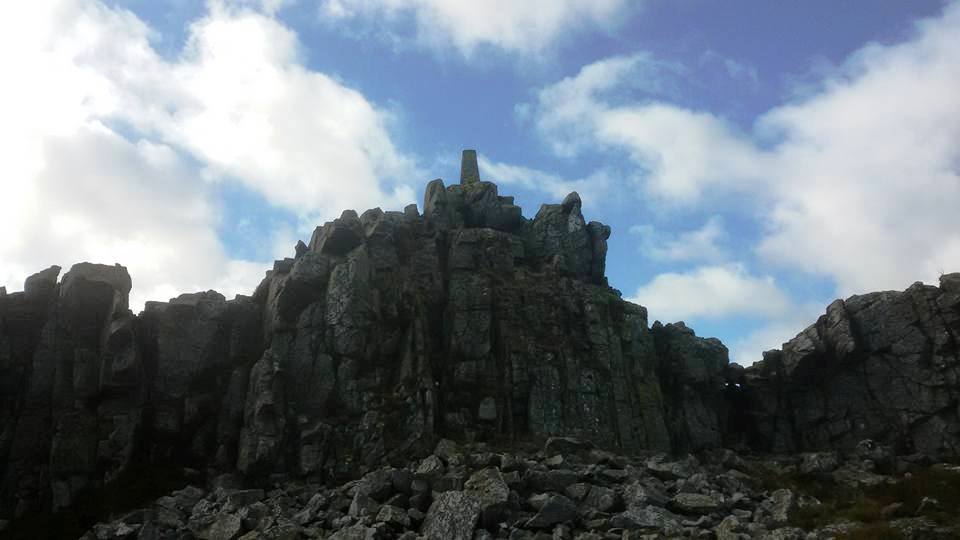 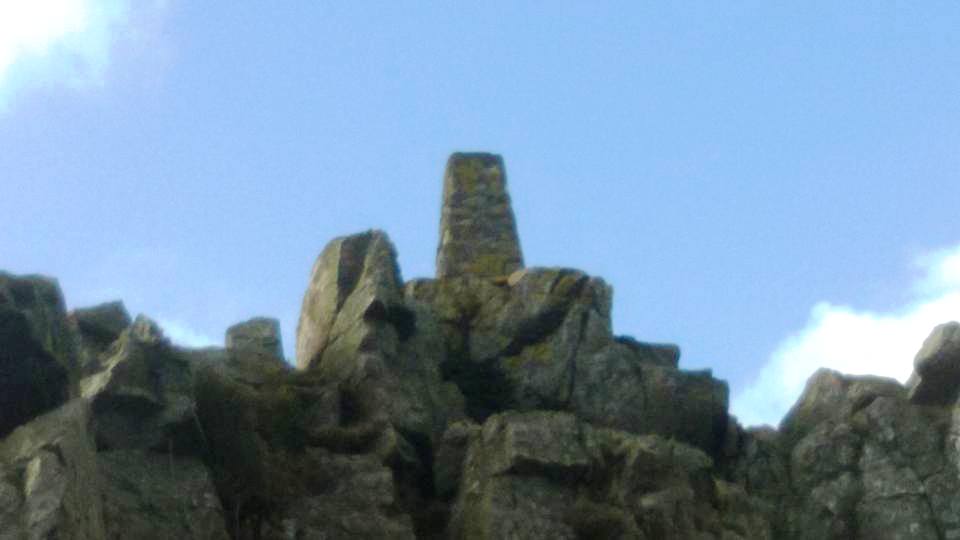 QSOs on this one were: 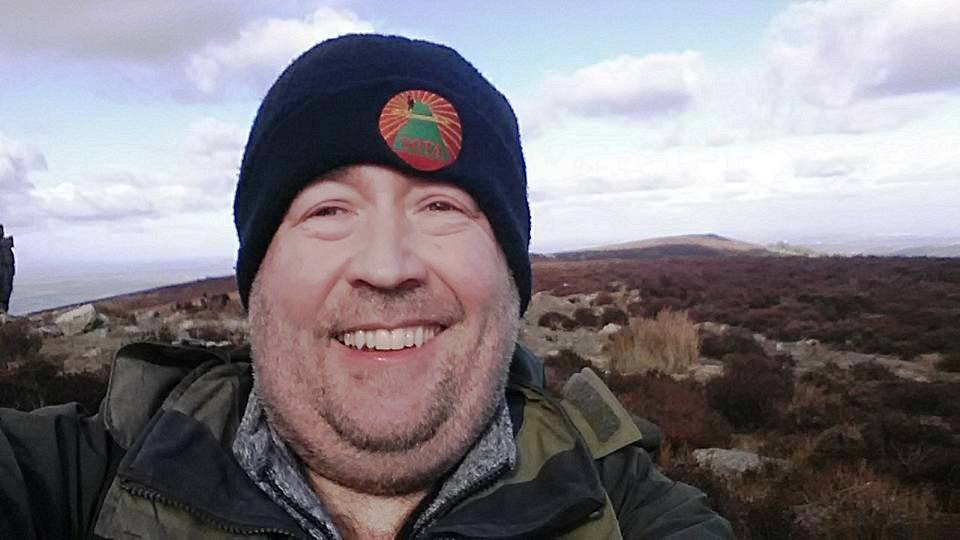 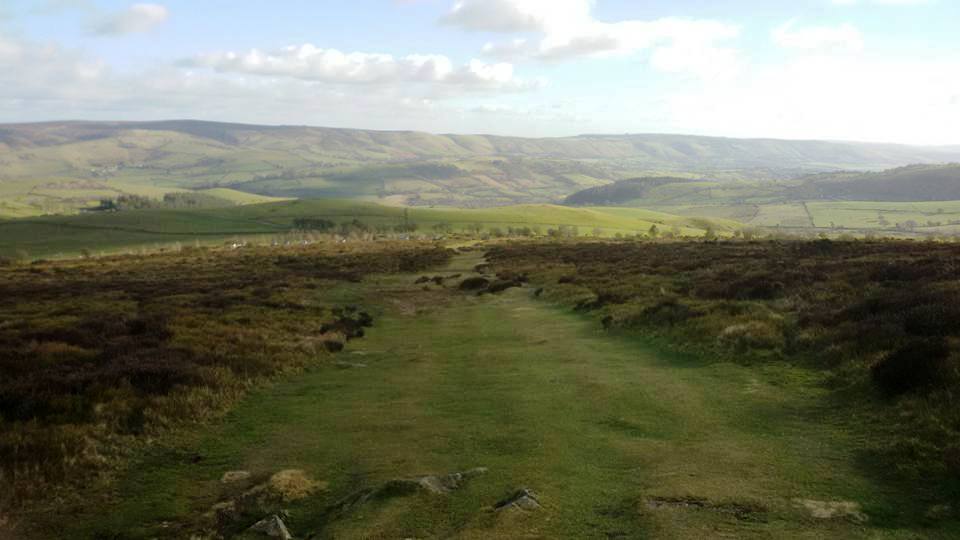 Finally, it was over the border into Wales, and Corndon Hill GW/MW-013. The trekking poles were utilised for the first time today as I anticipated the steep slog up Corndon. Views were magnificent from the summit, and it was a visually beautiful afternoon. Annoyingly, I had left my phone in the car, so was unable to take summit photos! 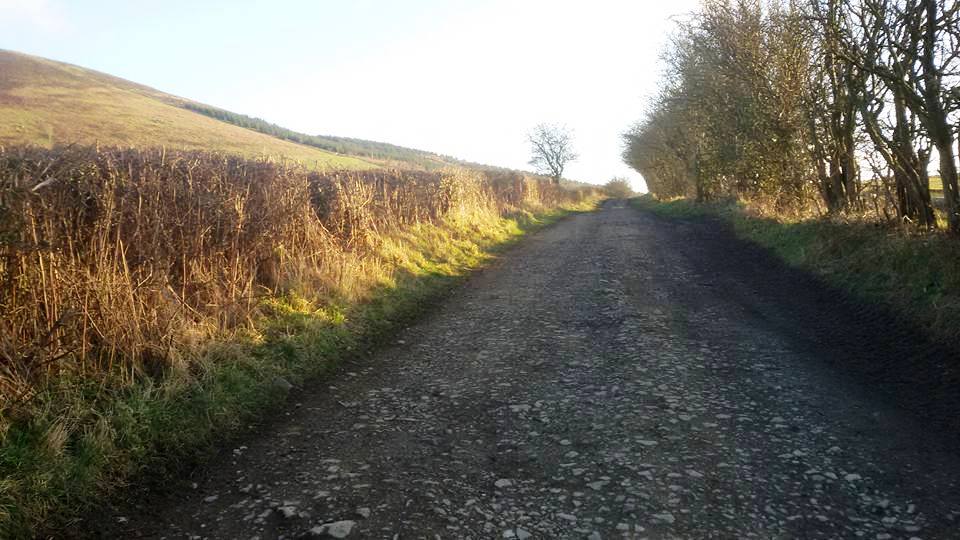 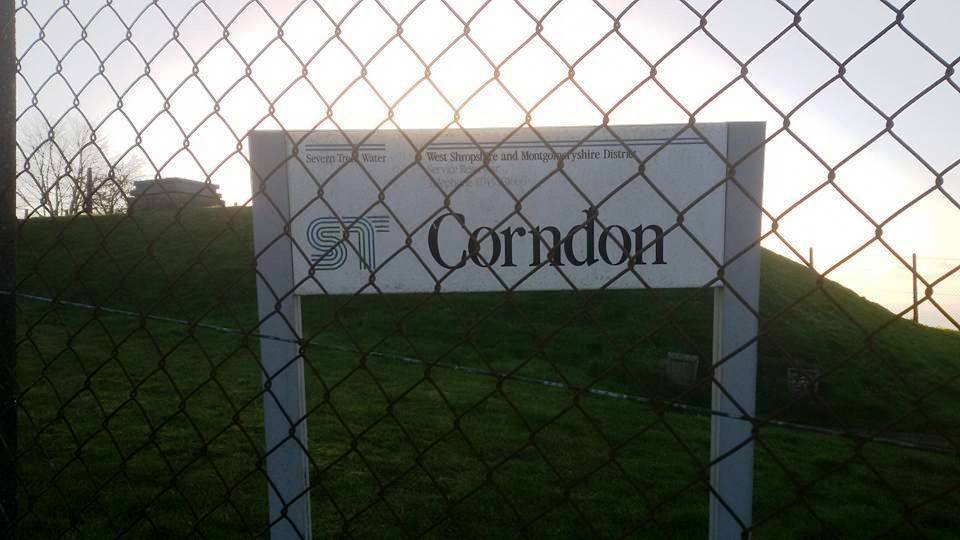 Two QSOs on C4FM meant that I had made Fusion contacts from every one of the five summits on the day. These were joined by four QSOs on 2m analogue FM. 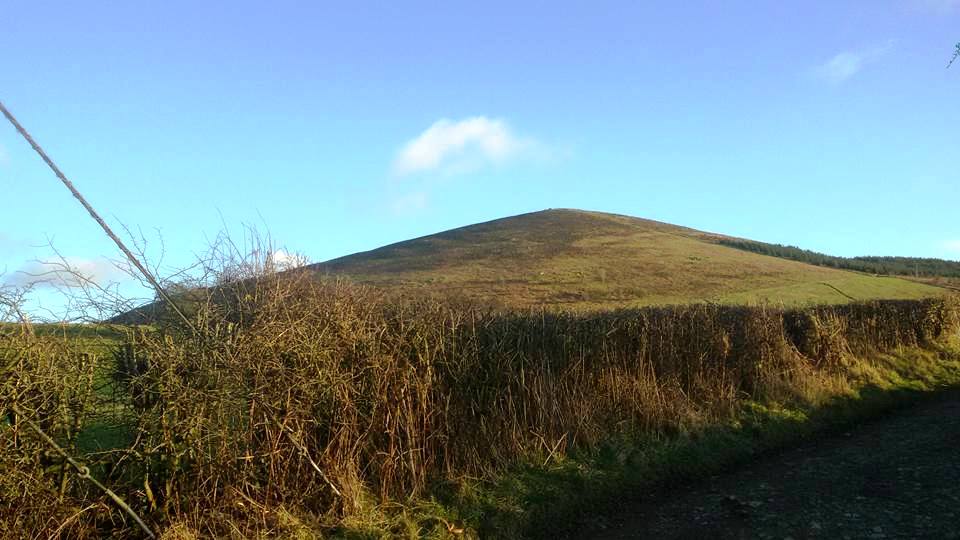 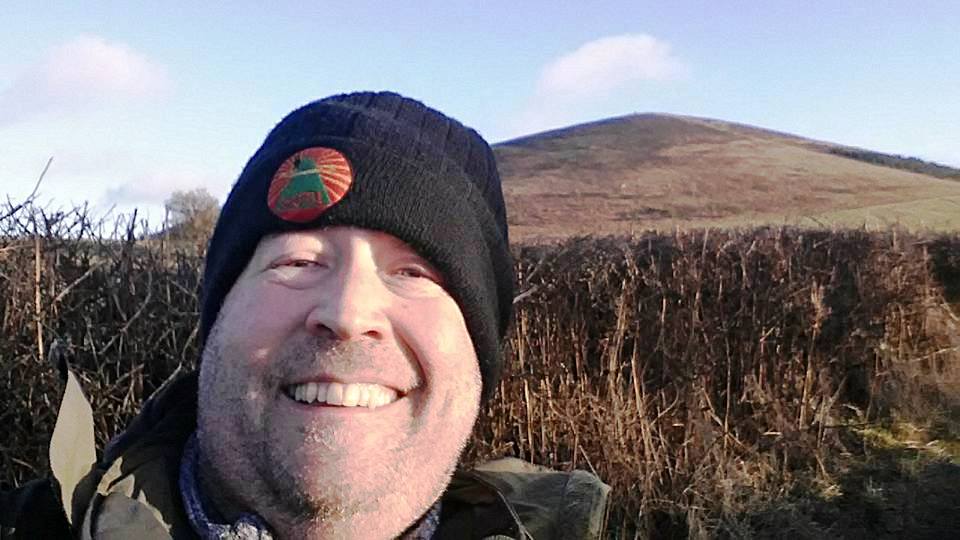 I was back at the car around 5pm, and in perfect time to get up the A483 and M53 to Birkenhead for that night’s top-of-the-table football fixture with Tranmere Rovers hosting my team, Macclesfield Town. It was a brilliant match, with Macc running out 4-1 winners to extend the lead in the race for the title. 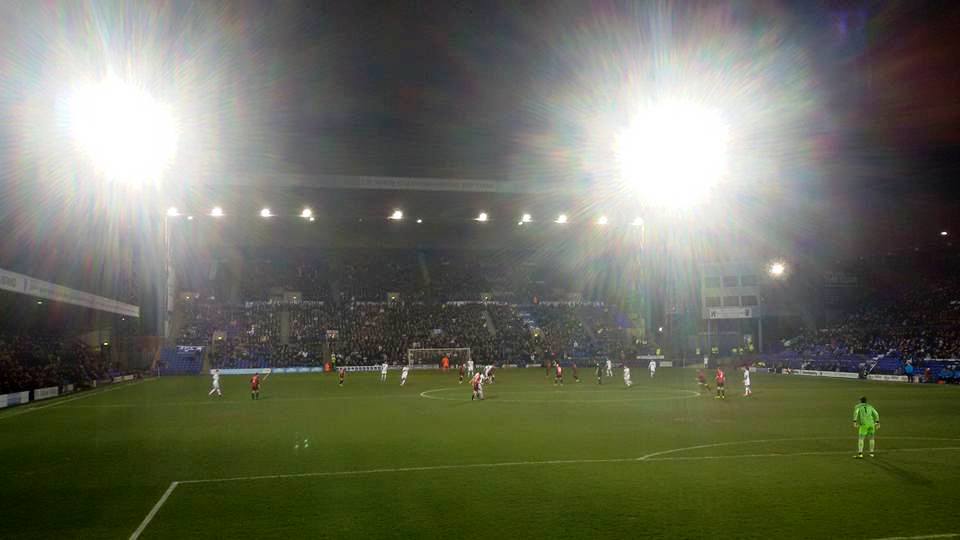 So an excellent end to a largely good day, that had started off rather unfortunately.

you don’t seem to have enough selfies

Disagree. One per activation is more than enough.

Some might say one per year is more than sufficient

Hi Tom,
Sorry to hear about the small crash with you fairly new car. that can be a gutting feeling - much, much worse if it happens in a car park and the culprit simply leaves. I hope it all gets fixed without too much hassle.

Great to hear the rest of the day worked out. Looks like you got some nice sun. we could do with some of that over here, it looks like were heading back into deepest winter, at least for a few days!

I saw you said you programmed the post codes into the Navi-GPS for the summits. What I’ve done (and re-do when there are updates) - is download the associations from SMP and load that KML file into my Navi-GPS in the car and then I can select by the SOTA code - the advantage being it also lists them in distance away from where I am - so I can see when there’s another summit not too far away and consider activating that as well if I have time.

Nice pictures as always - now if you could only get rid of the guy who keeps standing in front of the camera blocking the view … Only joking!

Well done mate, I’ve told the North West Fusion Group that there is another SOTA activator using C4FM, looks like it is working out well for you.

Sorry to hear about the car, hope it’s all sorted without any hassle - which is pretty much the best you can ask for now!

What we need to know is the whether the signal /is the same, worse, or better for DV vs. FM for the same QSO partner. i.e. Can you work someone on the handy when in DV and you cannot work them when you both switch to FM? (for the same power and antenna etc.)

I’m attempting to gather some hard statistics about this through the coming year. At the moment the signal strength is the same for each QSO I’ve had but they’ve not been marginal yet.

When I’ve had a few marginal contacts we should have a better indication as to whether C4FM can reach further than FM.

Folks I’ve talked to in the US, especially WRT mobile operation, have told me that C4FM holds signal better above squelch whilst mobile but that is a different property to out-and-out distance.

Sorry I missed you Tom, I wasn’t around all day, but couldn’t hear you from the Clee hills. My noise level at home on 2m has settled at S9 + recently, and I have failed to copy a number of local activations using handies with the standard antenna.
I doubt whether C4FM would help me with that…

White noise doesn’t open the squelch, so I was blissfully unaware until I tried to participate in the 2m UKAC recently using SSB and a temporary antenna, and found it quite impossible!
Manually opening the squelch on the FM rig displays S9 + on the bar graph

I have yet to investigate the source…

(Sorry to hear about the bump, glad it wasn’t on the Burway!)