I had my eyes for many months on a nice 4 summit combination in SP/BZ (Polish Beskids), easily achievable in 3 days; I had even identified ideal spots to spend the night. The week-end preceding the trip, I saw a possible good weather opening. I alerted my (non-ham) friends; they were in!

We left early on Saturday the 24th of April. We had heavy backpacks, as we expected cold, but not snowy weather and carried food and shelter for three full days. For SOTA, I carried a FT2D and a Diamond RH-205 antenna. I also decided to take a CW TRX, the SW-3B with a lightweight and short EFHW for 40m and 20m. 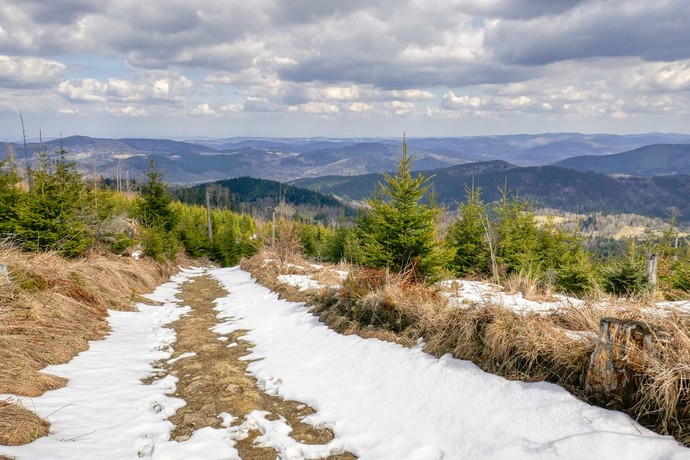 We met at around 10am on Saturday morning in the village of Zawoja. We started to the climb towards the first summit of the day, Polica SP/BZ-002. We encountered snow very quickly, only after about 1h of climbing… It became clear this was going to be more of a winter trip than spring trip! It wasn’t really a problem as we were equipped for harsh conditions! 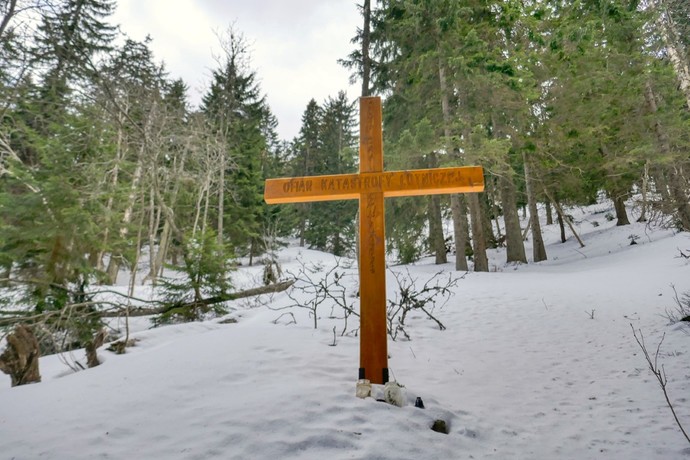 As we walked along the northern slopes of Polica, we passed by the monument reminding us of the crash of LOT Polish Airlines Flight 165 back in 1969. https://pl.wikipedia.org/wiki/Katastrofa_lotnicza_na_Policy 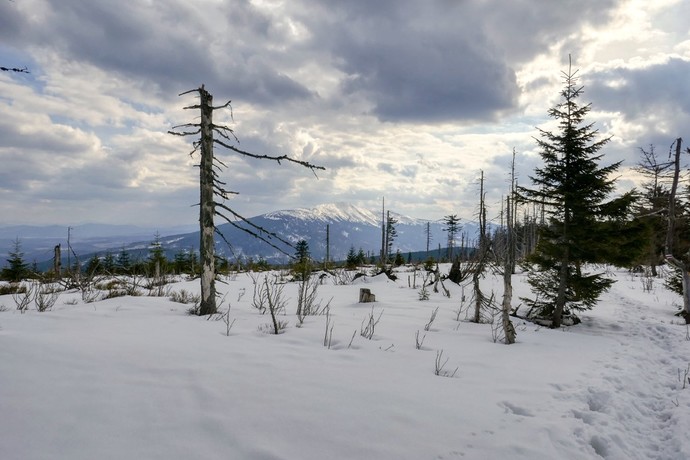 The target of our 2nd day was already in sight: Babia Góra (the “Witches’ Mountain”) SP/BZ-001, the highest mountain in Beskids and the highest in Poland outside Tatra mountains. An impressive view and daunting challenge ahead of us! 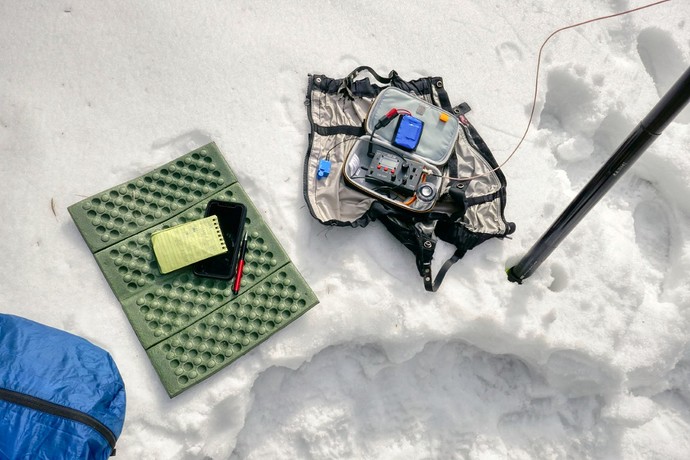 Near the top, my friends decided to take a detour to the nearby mountain shelter (closed at the moment due to Covid-19 restrictions but still offering take away food). I proposed to split and meet at the top; this would give me extra time of the SOTA activation! Food or SOTA, the choice is always easy

I found a spot near the top of Polica, deployed my antenna in deep snow, and started the activation. I relied on RBNHole to spot me. It worked well, but spotted me off frequency… It bothered me and I thought my SW-3B would have to be realigned. I also thought the TRX sounded differently than usual and had trouble to find a clear frequency. After processing the pileup on 40m, my mistake hit me in the face: the SW-3B was in SSB mode! The contacts on 20m were much more peaceful. I made 13 CW contacts, including 2 S2S (thanks F5LKW & SO9TA!). My friends still not in sight, I called on the traditional SOTA FM frequency in Poland (145.550) and made a further 7 contacts until my friends joined me. 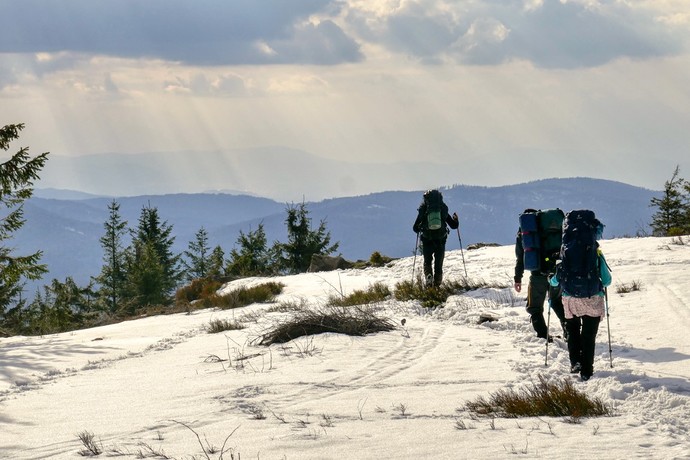 We started the descent towards out bivouac place - a clearing with a viewpoint, a few hundred meters from the marked path, and only about one hour from the first activated summit. 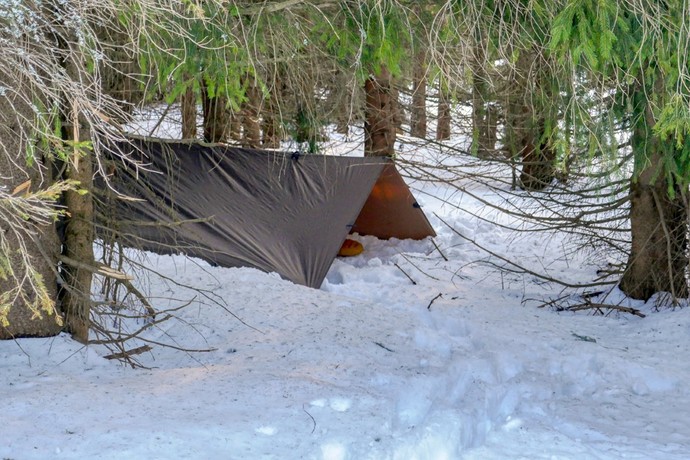 At the bivouac, we set-up our tents and had something to eat. Short after sunset and the usual get-together, we rushed to our sleeping bags. 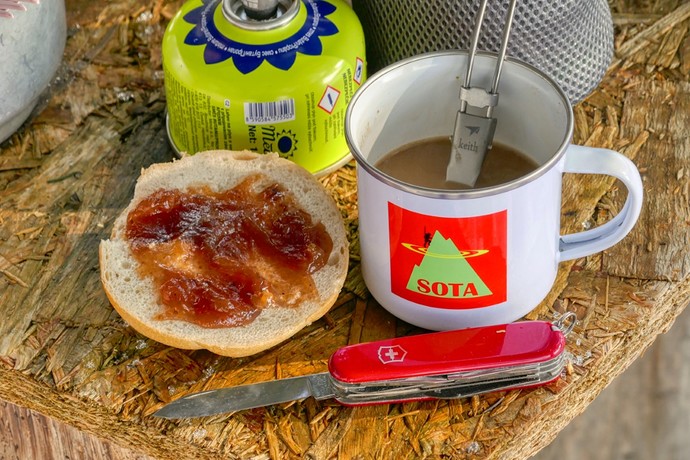 The weather in the morning was glorious. As we were emerging from under our tarps and tents, we heard some voices! After a few minutes, a couple appeared. The following conversation ensued:
Man > Good morning! How did you sleep? How do you know 7about this place?
Us > We noticed a clearing with a viewpoint on an internet map and thought it would be a great place for bivouacking. What about you? (in other words, what the hell are you doing early morning in the middle of nowhere?)
Man> Oh, we are the landowners!
Ensued a cordial exchange on the history of this clearing, which used to be a farmland!
The French breakfast was quickly digested! 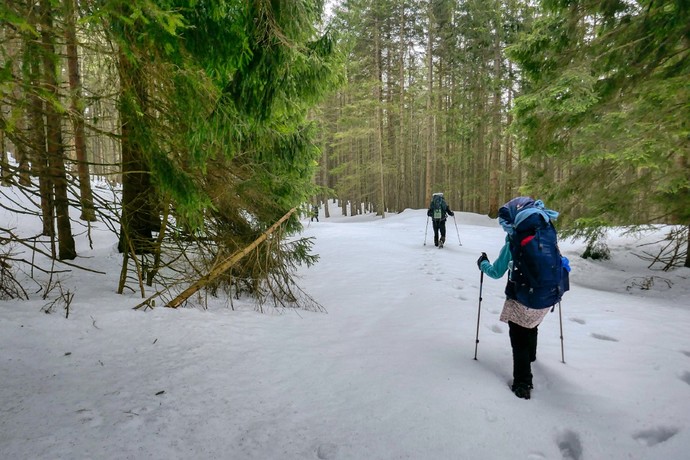 We left the clearing through deep snow, and reached the main marked trail. 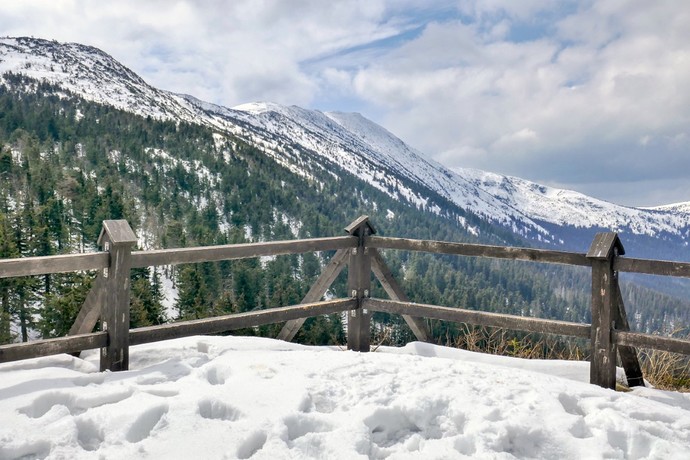 Ensued a short descent to the mountain pass, followed by a very, very long ascent towards Babia Góra. The views were magnificent. 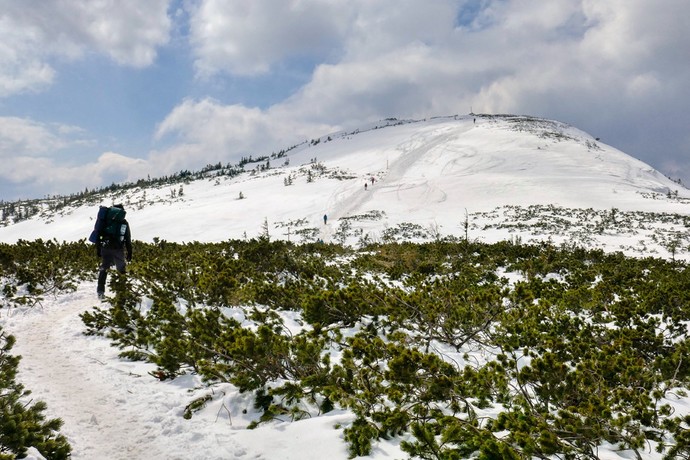 Every step was bringing us closer to the high point of our long week-end, and it was quite clear that this day was going to be a tough one! I regretted not taking my crampons; at last, I had walking sticks. Without either, the climb would have been a lot more precarious. 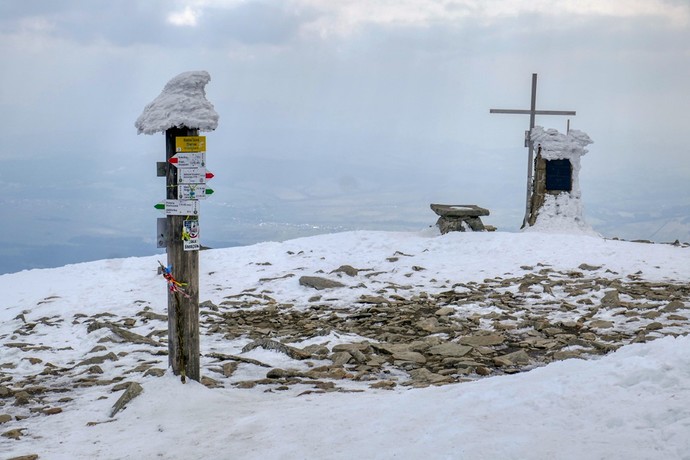 We finally reached the top. Hurra! 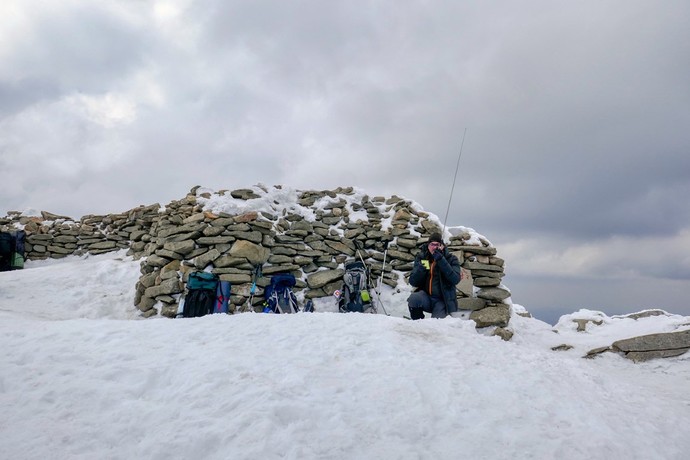 I had not planned to operate CW, and didn’t change my mind at 1725m of altitude! The stone wall protected me from the strong wind coming from the noth; a big relief. I took out my FT2D, attached the RH-205 antenna, and bagged 16 contacts in a short amount of time. 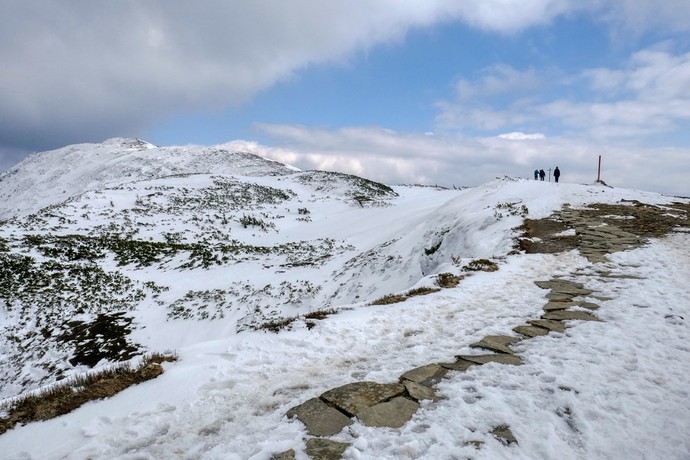 My friends were patiently waiting for me… once a CQ got unanswered, I quickly packed and we started the descent. 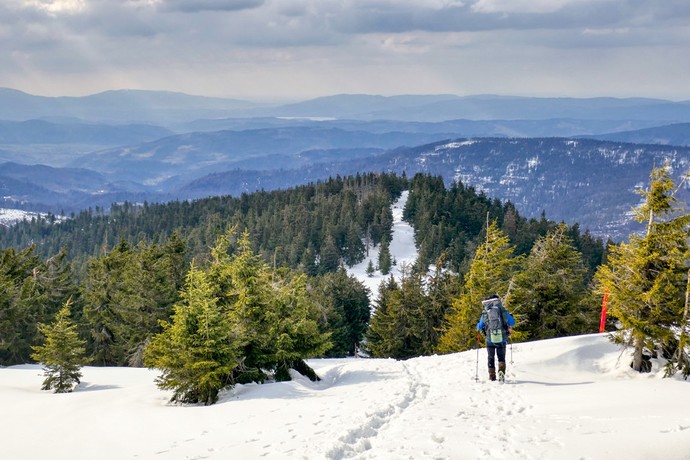 As the evening approached, the colours got warmer and the views even more stunning. 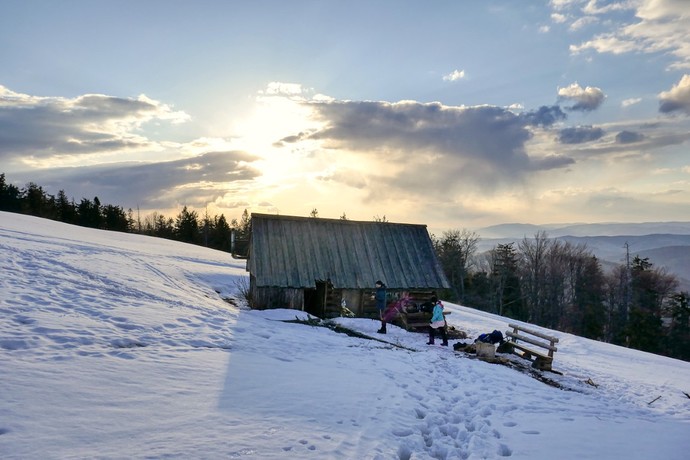 We finally reached our shelter for the night, an old shepherd’s hut, in the AZ of Beskidek SP/BZ-015! Comfort was minimum, but in cold and snowy conditions, even the smallest roof is an improvement to a tarp or tent of any size. 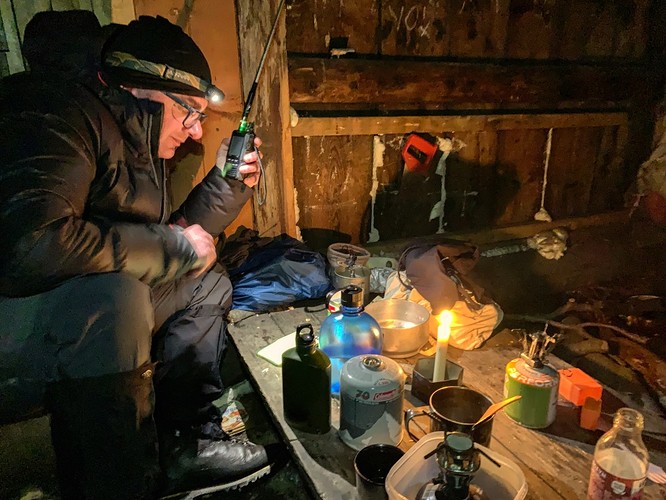 As planned, I made a short VHF activation in the evening from inside the hut for a total of 11 contacts. This is something really unique that I do not think many SOTA summits offer! I was thrilled and my friends got to hear first hand what an VHF activation sounds like! 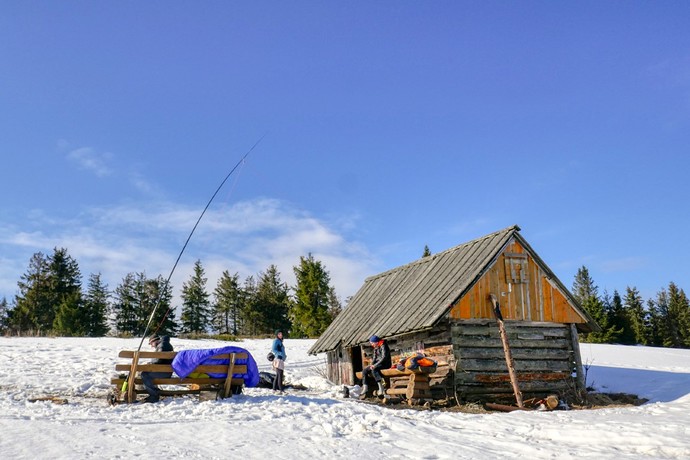 The night went well. In the morning, according to my original plan, I woke up early and made a short CW activation as well. This was a big success; the weather was fantastic and I bagged another 7 contacts in an stunning setting! I gained no points for this but it was an unforgettable activation! 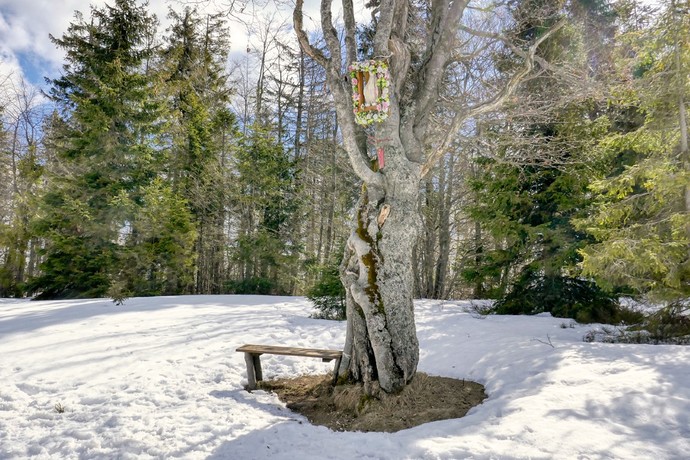 The clock was ticking. We were soon on our way to the 4th and final summit of the trip, Jałowiec SP/BZ-022. We passed a few shrines, a very common in Polish mountains and villages. 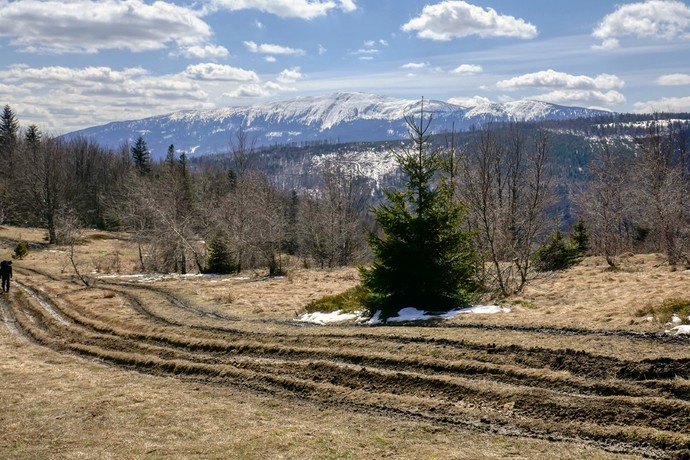 Babia Góra was often in sight when we turned around. It was hard to believe that we had walked all the way down from this huge mountain down to where we were today! 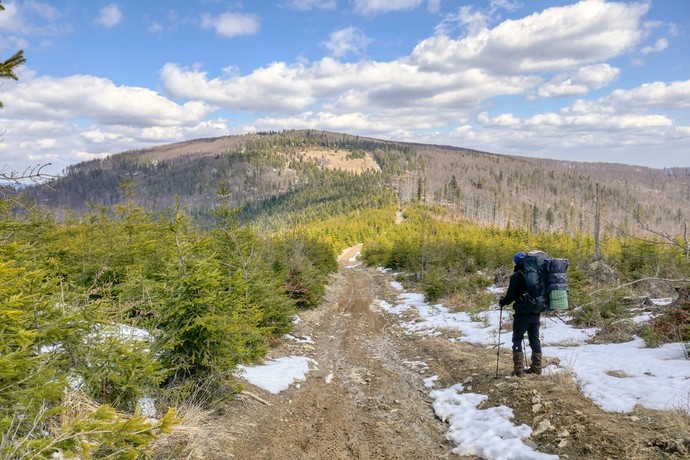 The approach to Jałowiec was long but pleasant. Less snow, and more views! 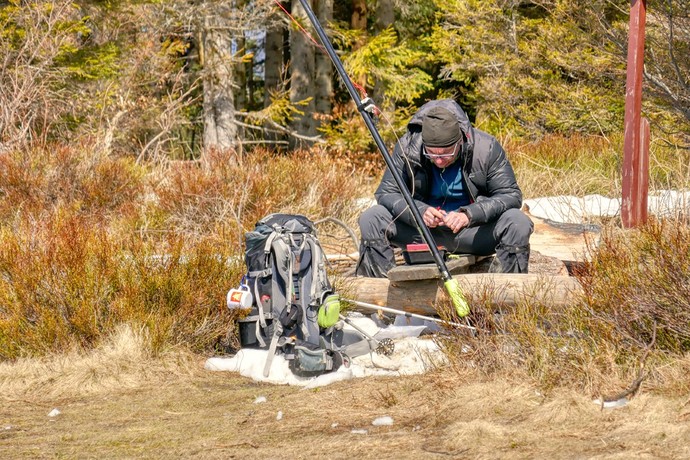 At the summit, I operated CW only. The sun was shining, and my friends enjoyed the short break. I was able to operate 40m and 20m and made a reasonable 14 contacts. It didn’t go without a hitch… Despite multiple repeats, I could not comprehend Arthur’s callign, HB9CEV, who was calling me for an S2S. I was stuck on the last letter of his callsign, V. As I was about to write down “…-” in my logbook, I regained control and was finally able to decode it as a V! 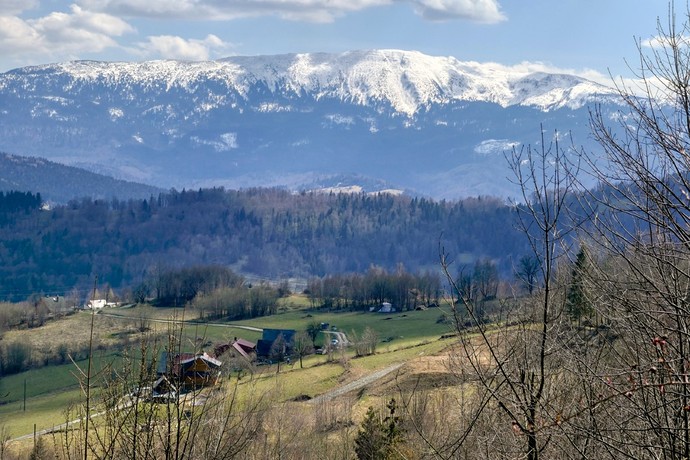 As reached civilization, we had a last look at Babia Góra. And after a short break in the village, we reluctantly drove back home… 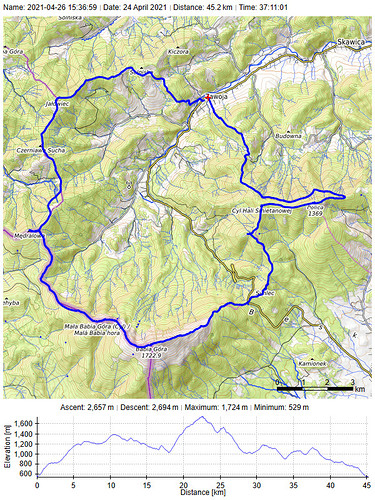 All in all, we hiked 45kms, with 2,600m of vertical ascent. I activated 4 summits, 3 in CW and 3 in VHF FM. The trip was a complete success. Thanks to all the chasers and to the next one!

Thanks a lot for the long report.

It was a great trip, same as your previous ones, but one thing was better here: finally I managed to hear you on frequencies & log QSO - four times !
Thank you for a great story and even more wonderful short QSOs on FM & CW as well

I will wait for your next interesting reports.
Chapeau bas for giving us unique possibilities and SOTA experience !

Thanks Romain!
For a really outstanding trip and photo report.

Hello Romain, thanks for your fine report and great photos

What a fascinating story Romain! I’ve never done an overnight activation myself and you did a whole series

Thanks for the nice CW S2S contact! For me it’s always a pleasure to work on the bands someone I also know in other dimensions, either physical or virtual.

A fantastic expedition and a fantastic report and photographs Romain. You have inspired me to plan a SOTA backpacking circuit in the next few weeks. My route will be 55km, with 3 SOTA summits and 1 or 2 overnight camps.

Brilliant report! Inspirational. I wish we had mountain huts on summits in Scotland!

Epic, brother! That’s the stuff that makes others aspire to do SOTA.