Chaser points available before and after the midnight UTC threshold.

And just under 90 minutes and two SOTA activations later, I’m back in the house.

Pleasant crisp, clear, but very cold night. I thoroughly enjoyed the ascent, and my fitness continues to improve.

Total of 8 QSOs made. Not bad for around local midnight with 5w from a VHF handheld with rubber duck. Probably impossible in most other parts of the world!

Hmm, stuff to do - work, chores, errands, family things and all other things of inconvenience to the self-respecting obsessive SOTA activator.

At some point in-between those things, you might just hear me on 2m FM from G/SP-015 in the next couple of hours.

It was desperately cold up there this evening - brrr! What made it worse was each and every one of my seven contacts describing their in-shack heating arrangements. I hadn’t even asked. Why, just why?

But every cloud (excuse the pun) and all that. The good aspect of the bitter cold was that the increasingly treacherous swampy “path” on the middle section, between the top of the concrete staircase and the National Trust land, was frozen solid. I could walk right over it without fear of dirty shoes, wet socks or slipping over and hitting the deck. So that cheered me up. A bit.

Good stuff, as always - I didn’t go out this evening although the clear skies in the Lake District were very magical. Somewhere between me saying ‘anyone fancy looking at the moon through the telescope’ and looking at a list of things to pack for my next SOTA activation of Snaefell on Sunday on the Isle of Man I forgot about the night and the telescope.

I did retest my backpack FT-8900R based pedestrian mobile setup at lunchtime today with very brisk conditions on a local WOTA summit School Knott to my good friend Nigel 2E0TUE. Interestingly the power settings of 5w, 10w, 20w and 50w were all one S point apart on his meter. Suffice to say I only lasted about 10 mins - couldn’t seem to find a quiet spot out of the wind.

I’m doing it again tonight - if only for a much needed constitutional after a family take-away tea from the Weston Balti Raj.

So if you’re a keen chaser in the Midlands / North Wales / North West, make sure you’re monitoring 2m FM after 11.30pm tonight. And if you’re really keen, stick around until after midnight, and grab yourself a second point for tomorrow … well you know what I mean…

Weather: a little chilly breeze on the summit, some ice down on parts of the track, but seemed overall milder than the recent activations. Bright moonlight, and clear far-reaching views.

Saturday 2nd December 2017. No gig, no football match to go to, so an activation then. However I had already activated The Cloud G/SP-015 this day - even if it was one sleep ago! 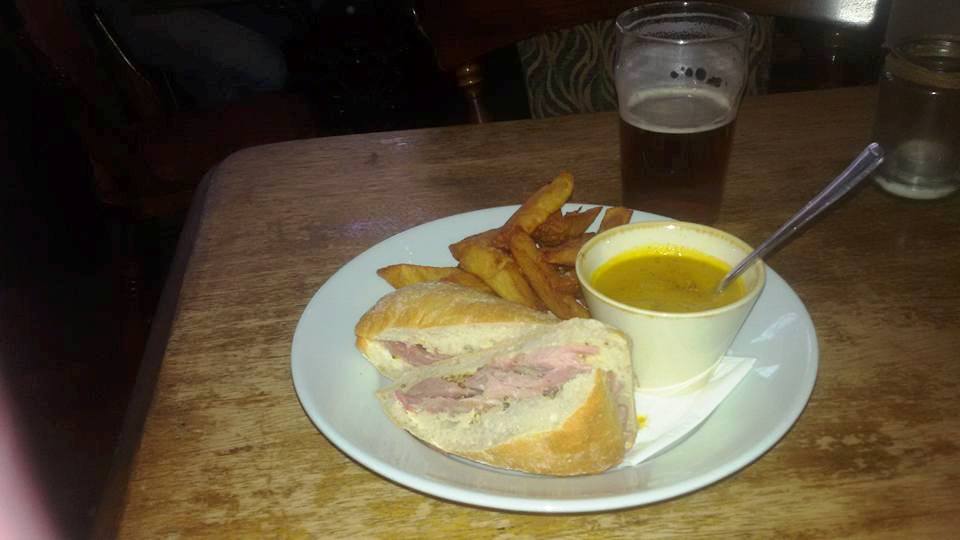 So an uninspiring run out to Gun G/SP-013 it was. As I reached the parking spot it was raining heavily. So I continued on down to Meerbrook and popped into the Lazy Trout for lunch. The combo of roast ham sandwich, double cooked chips and carrot & coriander soup appealed, as did the Wincle ale. 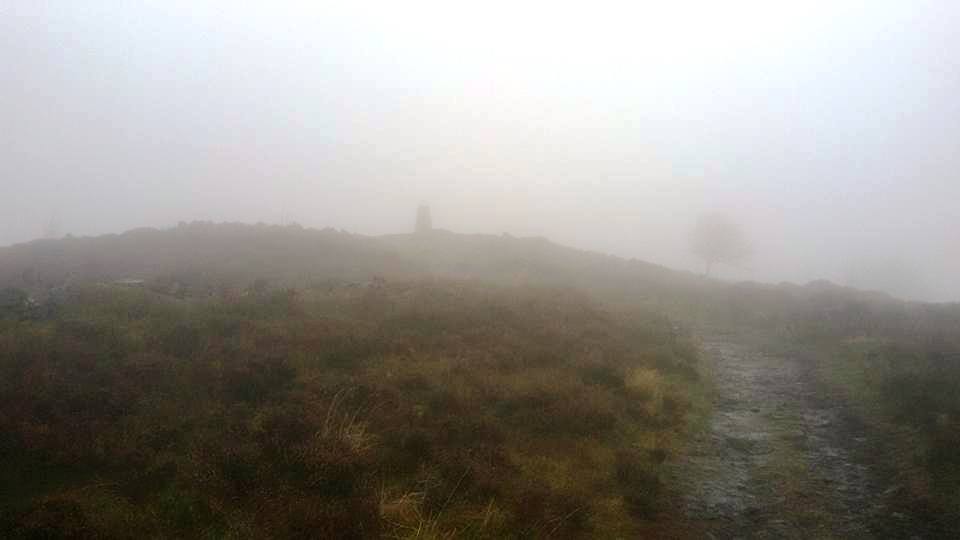 The rain had now been replaced by fog and I now went for my walk. The temperature was milder than a few days ago, but this meant the path was wet and boggy. 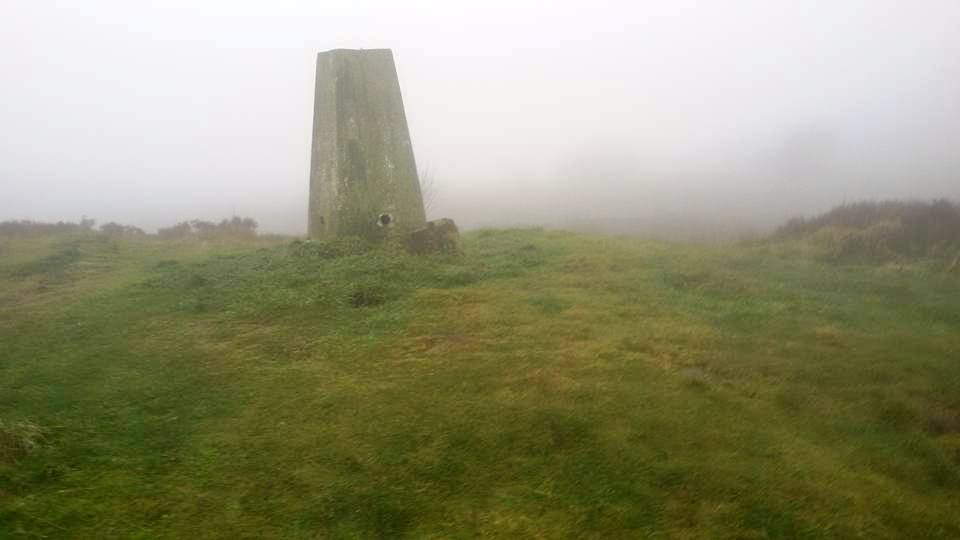 Not a memorable activation. Very few takers on 20m CW (9), less on PSK31 (1), none on SSB or JT65 (though I did try). One S2S on 2m FM with Jordan MW3TMX/P on Corndon Hill GW/MW-013, the last of his “Shropshire Five” round today (even though the last one is a few yards outside Shropshire!)

11 QSOs, 5 of which were into North America.

The cabaret was provided mid activation by a dog whose party trick was jumping onto the top of the trig point!

The ‘chief whip’ of our contest group had been ‘encouraging’ members to get on air in the 2m AFS event. A Sunday night gig in Blackpool ruled a full effort out of the question, but I got on for the first couple of hours from The Cloud G/SP-015.

I was fully set up in good time, so began with some ‘normal’ SOTAing ahead of the AFS period. It was nice to catch SOTA stalwart of previous years Tony G1JPV as a result.

Around 1000z, some pretty persistent rain started, so I got inside the bothy bag. It was amusing for the next half hour, eavesdropping on families walking by: “What is it?”, “That’s new since last time” and “I think there’s someone in there” among the remarks heard.

I write this over a late lunch at Rivington Poke Services M61, nestling underneath G/SP-010. 6" sub + coffee = £3 - bargain - for a motorway services! Now onto Blackpool to play some nice minims.

I gave my youngest son Liam lifts to the Job Centre and Remploy for his appointments, but before going home, I decided that I wanted some fresh air - and he needed some!

Knowing the mudbath on the middle section of the route, I changed into my walking boots at the parking spot. Liam pointed out that he only had his normal shoes with him. I offered him the option of taking the track right up to the farm for the longer, wider route to the summit, which I suggested wouldn’t be as mucky. Indeed it wasn’t; it was worse.

Still it was a nice change. How I’d love to live in that farmhouse at the top of that track there. Or even just acquire some of the land behind it and convert the old barn/bothy that stands there!

Three contacts on 2m FM with the handheld, then a unanimous agreement to descend via the normal direct route - which turned out to be nowhere near as muddy as anticipated anyway.

VHF is alive and well

…is there anybody there…? 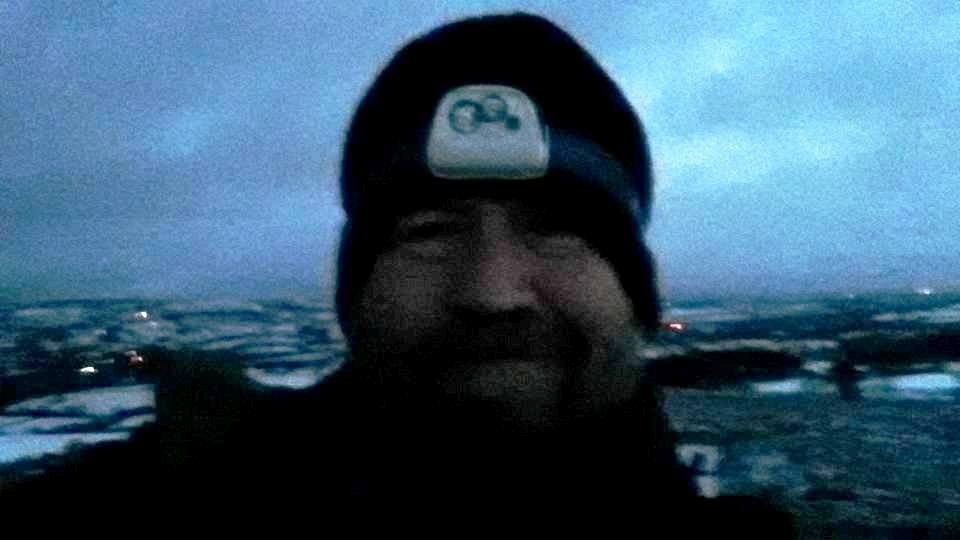 Quick activation on my day off before hitting the road again tomorrow. Considerably colder than yesterday - my hands were hurting less than two minutes after taking my gloves off at the summit.
Just two contacts on 2m FM. I’m sure a S2S called in as well, but they didn’t materialise on the QSY channel, and I never heard them again. 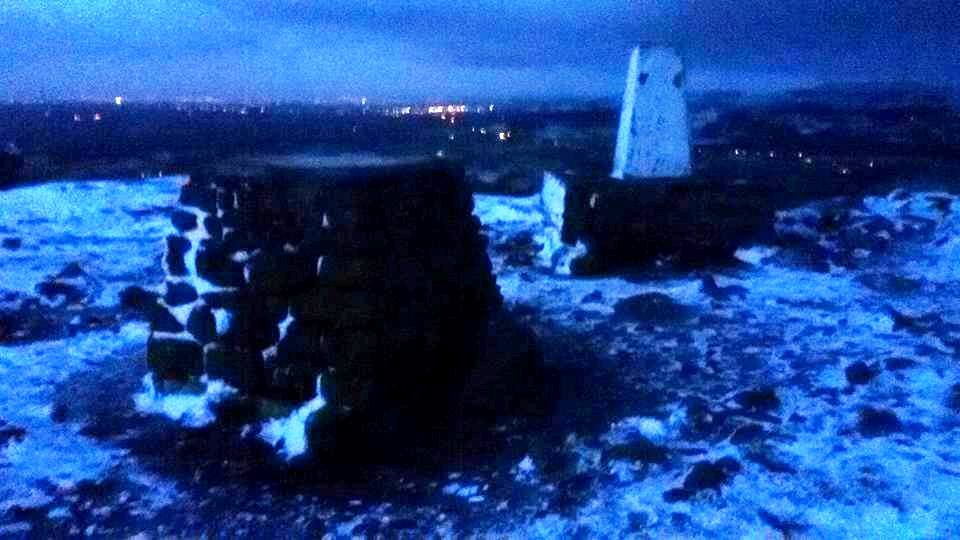 Double bubble tonight - just before and just after midnight - for any keen local 2m chasers.

Operation Double Bubble is about to commence … but will be abandoned if the ice is too bad on the roads. I’ll update from the parking spot … if I make it that far…

Well, I’ve made it to the parking spot. Roads icy but drivable with care. I’ll operate on 2m FM as M1EYP/M from the car until around 2325z, then I’ll begin the ascent.

So join me on 2m FM now if you please.

The ice on virtually all sections of the path was really problematic. Each step of the ascent needed time and care; a painstaking process!

VHF clearly alive and well. Again with just the hand-portable, I worked seven stations this time, all between 0000 and 0012z. So 13 QSOs around midnight (8 unique stations).

Now came the most important challenge - descending the treacherously icy path. This was twice as painstaking as the ascent, and what is normally a five minute descent took nearly half an hour. But, importantly, I got back to the car without any mishaps.

Now to observe similar vigilance for the drive home on some very icy lanes!

Another day already >75% over, and I’ve not done a SOTA activation. Looks like I’ll be heading out late again, so hoping for some night owl chasers!

7 QSOs. Seems it’s easier to get activity around midnight than around midday round here at present!

Of course, Sod’s Law states that the moment I buy a new HT, all the problems with the old one vanish into thin air. The charging procedure progressed and completed as it should, the battery behaved and performed as it should, and the intermittent on the antenna connection did not rear its head at all.

Still, the VX7R probably does need replacing, and it really doesn’t owe me anything.

Double bubble again very shortly. I’ll be activating Winter Hill G/SP-010 on 2m FM, and will hang around and call after midnight, allowing keen night owl chasers to work me for a second point.

QRV within the hour.