Winter-SOTA can be so nice – especially when there is sun on the summit!

In my QTH area the weather is foggy and cloudy since weeks. It was time to try to escape, I hoped to see some sun on Hirschenstein, DM/BM-006, a very nice summit in the Bavarian Forest. So, my YL and me packed the snowshoes and drove to Grandsberg.
It is a one hour ascent from there to Hirschenstein, gaining 250 m height, not too exhaustive. We started in the fog, it got brighter and brighter, and indeed, about 50 m height below the top sun came through. What a feeling! 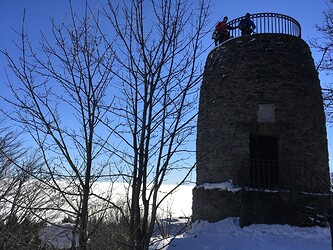 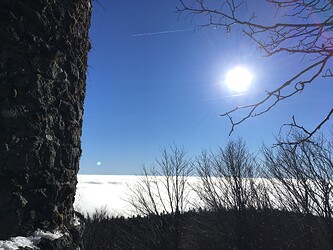 After some beverages and snacks it was time for activation. Temperature was around zero degree Celsius, no wind, it was just lovely.

This summit is very popular, when I unpacked my equipment, tossed the red throwline in the tree and positioning the counterpoise I got some astonished questions: “what are you going to do here?” It was fun to let people guess what this is all about, hi. Later, after my activation a guy stepped telling me: “… when I was in the Bundeswehr (German Army) we as well worked like that, with dipols in the trees, but we used 250 Watts not 10 Watts….” 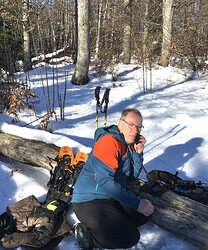 I used my KX2 and the short 7.6 m vertical wire antenna. Usually using one counterpoise on snow does not provide a stable and very good SWR, but on 20 m it was OK this time, SWR from 1.0 to 1.5. The band condition on 20 m were good, nearly no noise, good signal quality. I logged 17 QSO´s including three S2S in 12 minutes, then searched and pounced another S2S.

I changed to the 40m band, the SWR was about 2.0, not too stable, but still ok. The band was more occupied, a contest had started, but I could get again 23 QSO´s in 20 min and again five S2S.

Lastly I returned to 20 m again, had another five QSO´s, one DX to Brian, @N2BTD and finally via Groundwave to DK1ZX/P, Alex, a local SOTA colleague. He activated DM/BM-047, just 25 km away. 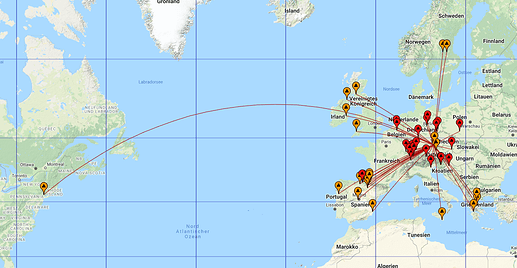 After one hour activiation and nearly two hours in total on the summit, it was time to start the decent. 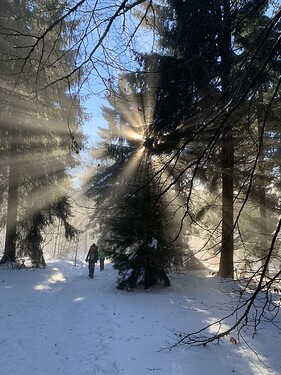 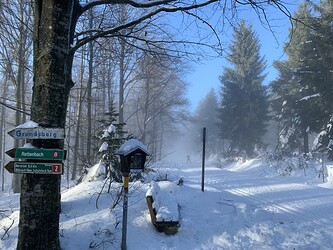 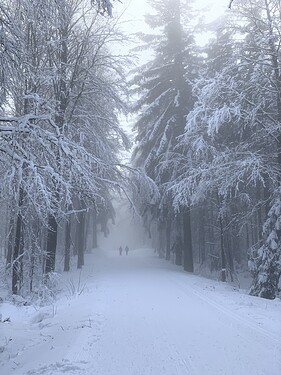 This activation showed me again, how different the conditions in winter time are. One week before I activated DM/BM-002, it had snowed so heavily that my smartphone stopped working and I had t abort the activation after 10 min, hoping not to damage my KX2 in the heavy snow storm. In December, on OK/PL-088 it was stormy (see Activation Report).
The differences are much bigger than in summer time, weather conditions play a much bigger role. But dealing with the available conditions, try to make the best out of it, finally this is part of the charm and fascination of SOTA activations.

Thanks to all chasers, I enjoyed the nice QSO´s, all the best (especially to Guru, @EA2IF)
CU on the next summit 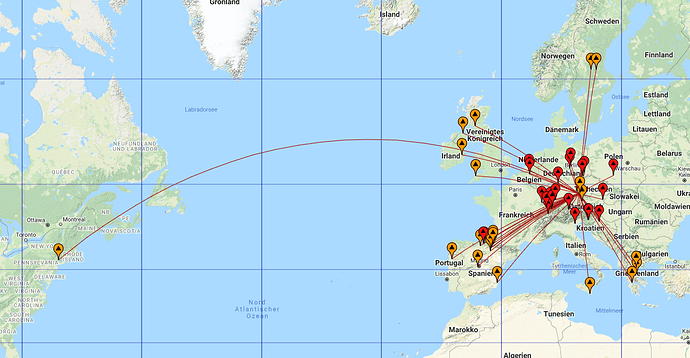 Hi Paul,
Thx. Looking forward to the next S2S

Wonderful photos - thanks for sharing your summit and report!

Thanks for sharing a very nice write up of your activation Klaus. Really enjoyed seeing the photos. Honored to be the only one in North America in your log. I am only using a 124 foot end fed with 100 watts. Hope to have a hexbeam up in the Spring. Hope to work you on your next adventure.

I find it amazing what is possible even with some Watts. I am QRV since about three years now, it is my first solar cycle and I enjoy every DX as it is still new to me
Looking forward to our next contact