I wouldn’t go as far as to say “enemy” as regards FT8. I have occasionally used it, but being (IMHO) more an automatic contest-type-mode rather than conversational, it lacks the “reward” of working to make a low level SSB contact. You click on the required contact and you either make it or you don’t. It has it’s place but it’s not my favourite mode. I do use FT8 more than other digital modes like PSK or RTTY and I did take part in the testing phase of the software (along with thousands of others). I guess for the same reason that it is harder to make an SSB contact than a CW one (if I could ever learn CW), using SSB remains for me a larger challenge to make a DX contact than either CW or any computer generated digfital mode.

Do we have our first FT8 only Mountain Goat yet I wonder??

Difficult to say. The DB shows that DH7WW is the only goat on data with 2398 points, but how much of that if any is FT8 is not shown on the DB.

I see what you did there

Impossible to say. I’m pretty sure that filter on the DB adds up all the activations that have at least one Data QSO in them - so might not actually reflect all the points achieved using data alone.

Anyway, I’m sat here on G/SP-015 chatting away on the Reflector while WSJT-Z operates away automated-style on my tablet! Good fun for me - but won’t be everyone’s cup of tea! 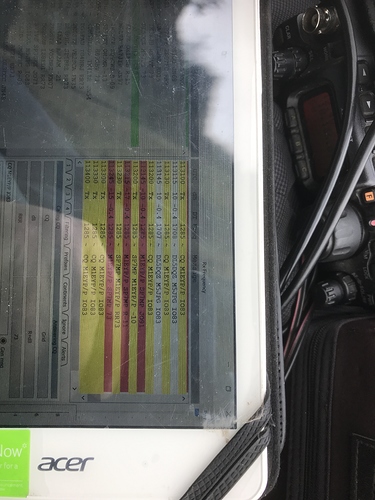 Good fun for me - but won’t be everyone’s cup of tea!

I certainly couldn’t do that, it makes the radio incidental, almost irrelevant, but each to his own!

Once I’d got bored of the Reflector, I checked my tablet and I’d worked seven chasers. Well cool.

I was just thinking the other day about trying to do more SSB while on the summit. I’m really new and just started doing CW activations (sorry to all the CW guys out there for murdering CW) and I’m having a lot of fun, but I figure I should still through my line out for a few SSB contacts since a lot of hams don’t do it.
Cheers.
N1CLC

Yeah go for it. One of my favourite things is activating with a variety of modes. I regularly use FM, SSB, FT8 and CW for activating. In the past I have used PSK31, PSK63, JT65 and AM. In the future I am intending adding FT4 and SSTV.

It keeps things interesting for you as an activator to keep changing it up, and gets you in contact with a wider circle of chasers.

Imagine a video via SSTV!

Hi Christian, try SSB by all means but do it because you want to and not because you think some SSB chasers are missing out. As one of your countrymen [I’ve forgotten who] sagely pointed out on this reflector some months ago, we activators are usually being selective anyway by the choice of band(s), power level, time of day [hence propagation condx] as well as modes used – we can’t hope to satisfy all chasers wanted to bag our SOTA summit.

Having said that, although CW is my preferred mode, until the UK coronavirus lockdown this week, I’ve been having fun in recent months doing some 2m-SSB pedestrian mobile.

I’m well used to your reverse psychology over the years Richard.

Don’t worry, I WILL do it at some point.

Look, the activator is king. He is the guy who made the effort, carried the gear and braved the elements.

That said, what would an activator do if there were no chasers?

For a while i tried to be a high-speed and low-drag activator. I’d get in, run 20m and 40m, and run for the next summit. But one day I was upset with another activator. He was activating a near-by summit that I had already activated. I was hoping to work him for SOTA complete. Well, he was only interested in 20m. Never heard a peep, 150 miles is too close for 20m, but way too far for 5-watts.

But in thinking it over, I realized I was doing the same thing. So I made some changes to how I activate. Now, unless I am chased off the summit for some reason, I will try to work SSB and CW on every band I can hear someone on. I will work a band and a mode until I can’t hear anyone more calling me. I might even run through it twice. I remember how i felt missing out on SOTA-Complete that day, so I try to give every chaser a chance now.

The activator is still king, they made the trip and they can do whatever they want. But if you have the time, don’t be in a hurry. Trust me, the journey to mountain goat is more meaningful than the trophy.

I try to balance the time and expense of activation trips (I live just outside Chicago, so most summits require more than a day trip), winter activations (where wx conditions affect how long you safely can stay out) and maximizing contacts per band. I also enjoy the logistical and physical challenge of trying to activate several summits in a day while still exhausting callers on each band; I don’t call SOTA “Biathlon for Geeks” for nothing ;-). I do almost exclusively use CW (but have a mic with me in case both paddles break!), and also wanted to achieve MG with all CW qualified activations.

Unless safety demands otherwise, I call on each band until nobody comes back to me for several minutes. Whenever possible, I check spots to see if anyone has asked me to return to a band because they missed me on the first pass.

When I learned my 20-30-40 PAR end fed was excluding certain folks, I built an antenna that allows me to operate on enough bands to not miss anyone at any distance. I also made kit changes to keep me warmer during longer winter activations. Those changes generally double my operating time as I now cover more bands.

I understand the regret at missing completes, new summits, etc., especially for those who operate mostly on modes I’m not using. I feel a bit that way when I see an activation that only uses UHF/VHF ;-). But just as the journey to MG is one that should be savored, so is the journey to other SOTA milestones. That said, this thread is a good reminder for me to perhaps crack the mic out more often.

I know a lot of folks who made MG in mixed modes. I know several who did it all CW. I personally only know of one who made MG using only SSB. I’m sure there are more. But it seems to me that would be the greater challenge.

The activator is still KING. Nobody on the ground can know what is happening on the summit. There have been a few times when I stayed too long trying to please all chasers and ended up shivering while packing up.

I left Chicago in 1975. I miss the museums. I miss the lakeshore. But I’m never going back for way too many reasons.

Paula, come out for a visit. We’ll help you get TX and NM in your activator. Mordor Mountain (I imagine you’ve heard of it) is only 6 miles away.

Agreed an all-SSB MG would be tougher. I just wanted to do CW because I prefer it ;-).

An activation trip to TX and NM is on the list, as soon as we get safely past the Covid-19 outbreak.

I don’t see why getting to MG would be harder using SSB rather than CW. After all as an activator I only need 4 contacts to qualify a summit and get the activator points - the same as a CW operator.
I could see one possible scenario where an activation could fail on SSB and work on CW and that’s when there is no cell phone coverage and the RBN networks spots the CW activator but not the SSB one but the contacts don’t have to be generated via a SOTAWatch spot, I can simply search and pounce on 4 random stations to get my needed contacts. They don’t need to log me (and probably wouldn’t) and the activation is still valid and so I would get my points.

I am actually activating only on SSB but I still have a way to go before I get to the magic 1000 points.

SOTA doesn’t discriminate between the modes - so why should we? All modes are equal in SOTA.

Every participant’s experience will be different. As a regular user of all three modes, I would say CW is easiest, data is hardest and phone in the middle. Obviously for someone who hasn’t learned CW or developed a working portable Datamode system, SSB will be easiest. But then some people who can’t do CW or FT8 claim that SSB is hardest. So who knows?

Or more importantly, who cares? All modes have equal validity in SOTA. I enjoy them all and regularly activate with them all. Or rather I did do, before this awful Covid 19 situation we are all suffering. Oh to be in Switzerland right now…

Under marginal band conditions, CW will out-perform SSB. I have been out where no one was heard on SSB, but still made several weak but completed SSB contacts.

That’s my story and I’m sticking to it.