ATCF, my nearest SOTA summit is Shining Tor G/SP-004, 557m ASL, 2 points + 3 winter bonus. I have not actually activated it in 2017. I have just over 2 hours left tonight to collect the winter bonus - or I must wait until December.

Can I request top band ?

Made 4 contacts to qualify - but no more takers yet. I’ll do a few more calls.

Hello Tom. Great that you qualified G/SP-004, last night. Sorry I missed your SOTA Reflector Post. I switched off this computer about 21:00, (just too soon, I think).
Many thanks for the QSO’s yesterday, GW/NW-042, 2Mtr. and 70cm. and GW/NW-043, 2Mtr.
It was only when filling in my chaser log, yesterday afternoon that I realized who your co-activator was. His callsign seemed familiar, (the W confused me).
All the contacts I had yesterday where lower in both Tx. and Rx. than is usual from those locations, from GW/NW, G/WB, G/NP, and G/SP. Did you find this at your locations?
Best Wishes. 73 de Paul M0CQE.

Context is your friend Walt.

Wednesday 15th March 2017 was the last day of the winter bonus period in England - and Wales. Richard and I set off from Macclesfield shortly after 7am and called in at Lymm Truck Stop for a SOTA breakfast. 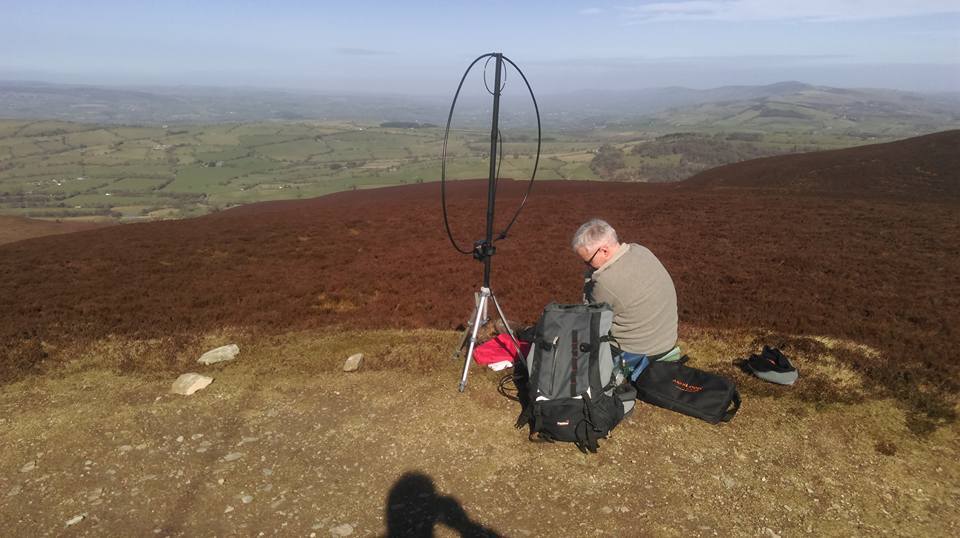 We parked at the Ponderosa Cafe on the A542 Horseshoe Pass and first tackled Moel y Gamelin GW/NW-042 via Moel Faen. Richard was doing various test and things comparing antennas and occasionally calling CQ and working. I set up the 20m GP and worked on CW, and a bit of 2m FM. 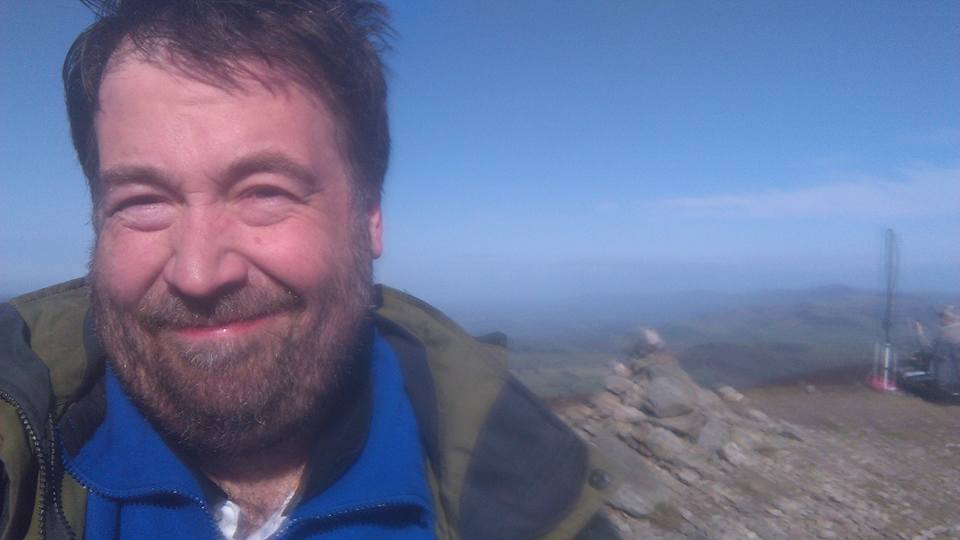 The amusing part of the activation was when Richard worked Mike 2E0YYY/P on Walton Hill G/CE-002 S2S on 2m FM. 59 reports were exchanged, then Richard passed the microphone to me. Suddenly, apparently, Mike lost me in QSB and couldn’t pull my call out of the noise. I should start doing the RSGB propagation forecasts because I’d accurately predicted that exact event. 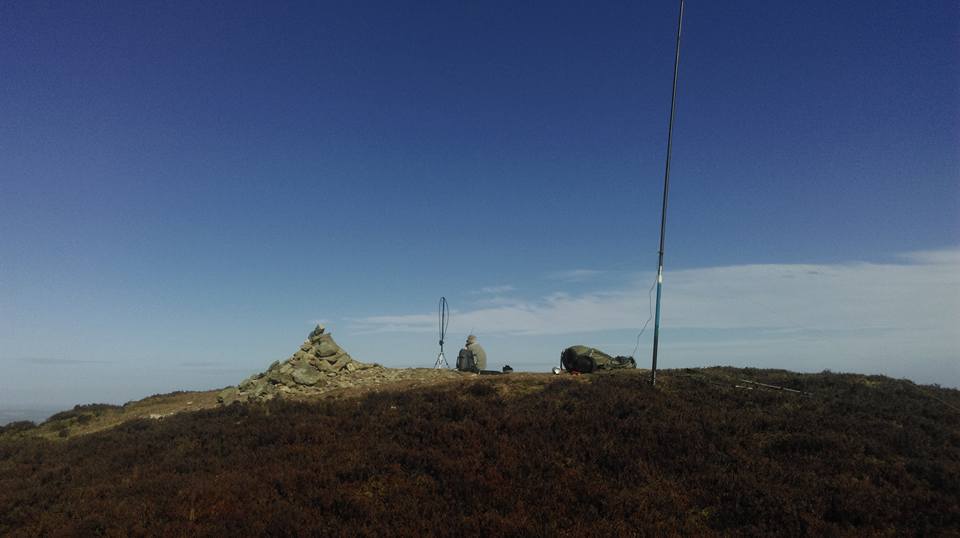 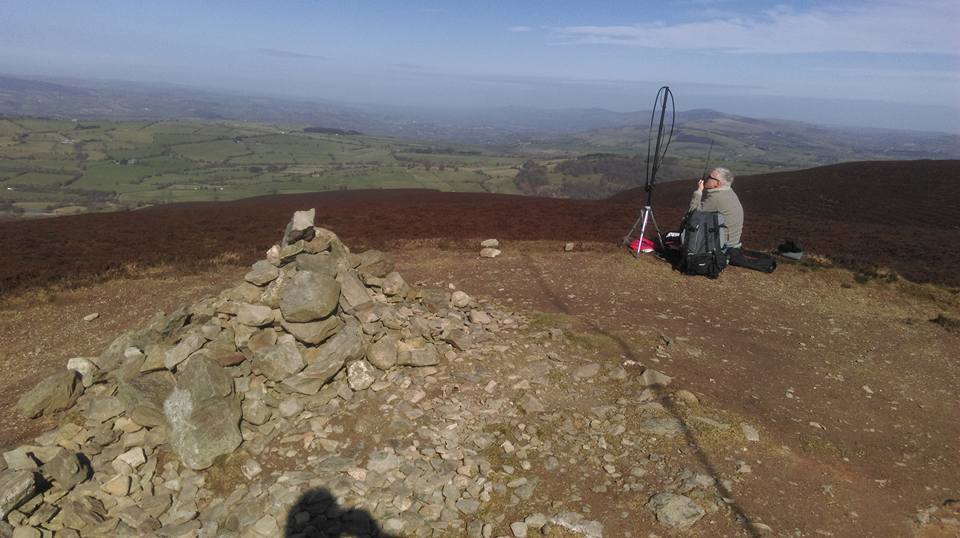 Back down at Ponderosa, it was, naturally, the iconic steak & kidney pie with mash, peas and gravy. A very enjoyable and welcome lunch. 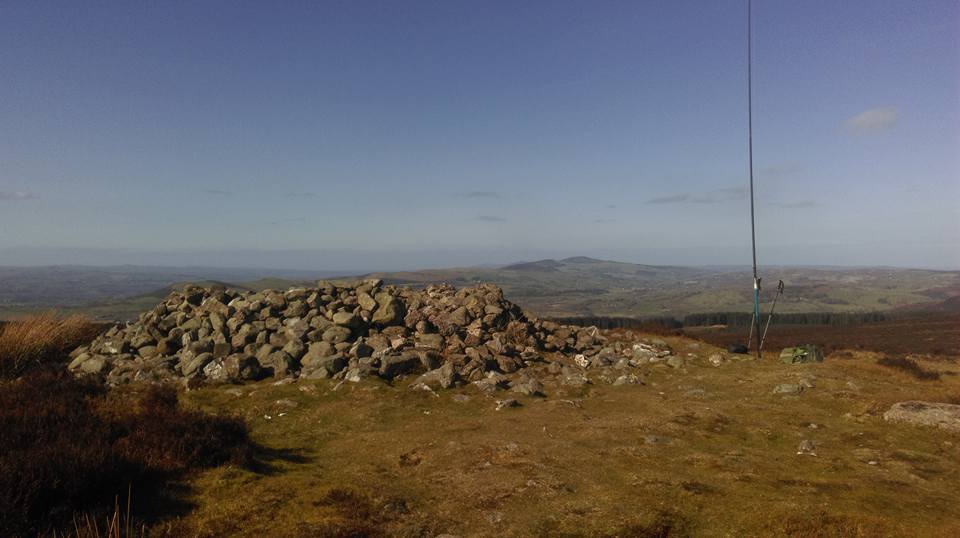 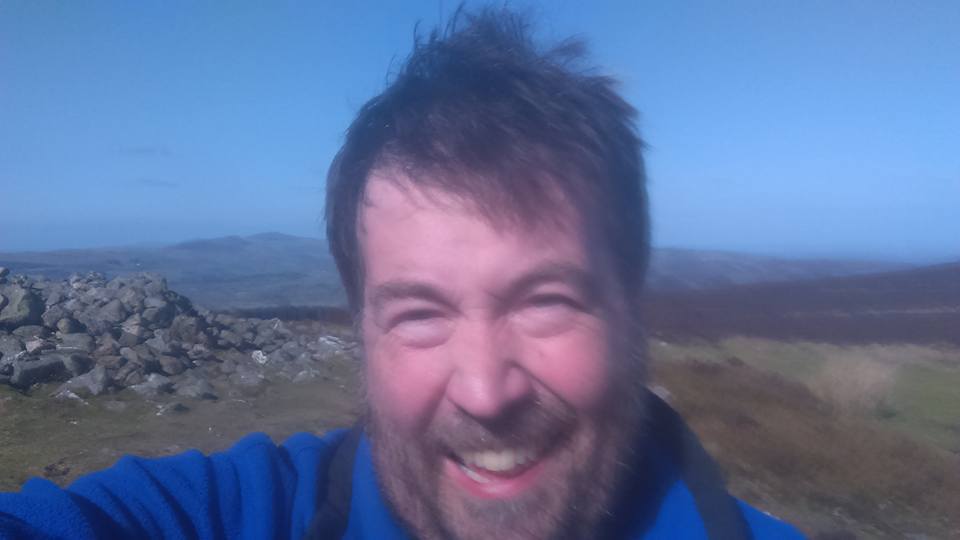 It turned out that Neil GW0WPO/P had also been activating on Cyrn-y-Brain - but across by the trig point. He stopped by for a chat as he walked back past us. 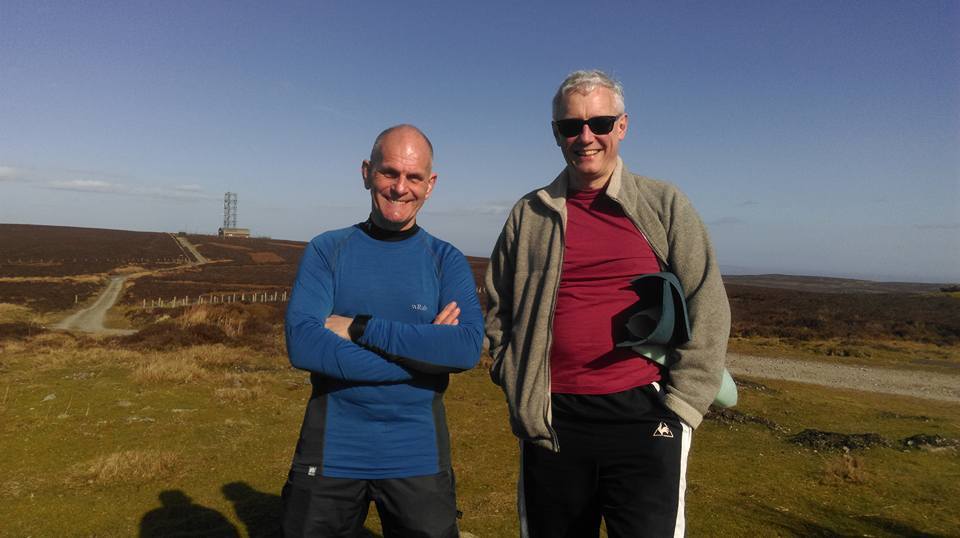 On the way home we eventually found a pub open in one of the Welsh villages, and a couple of pints of Brains ale were enjoyed. I’d often wondered why Welsh real ale tended to be served slightly cooler then English real ale - and indeed if that was actually the case, or just my mind playing tricks on me. I asked the landlord and found that it was in fact correct, and was due to a significantly higher number of pubs in Wales having old-fashioned “real” underground cellars with a cooler temperature! 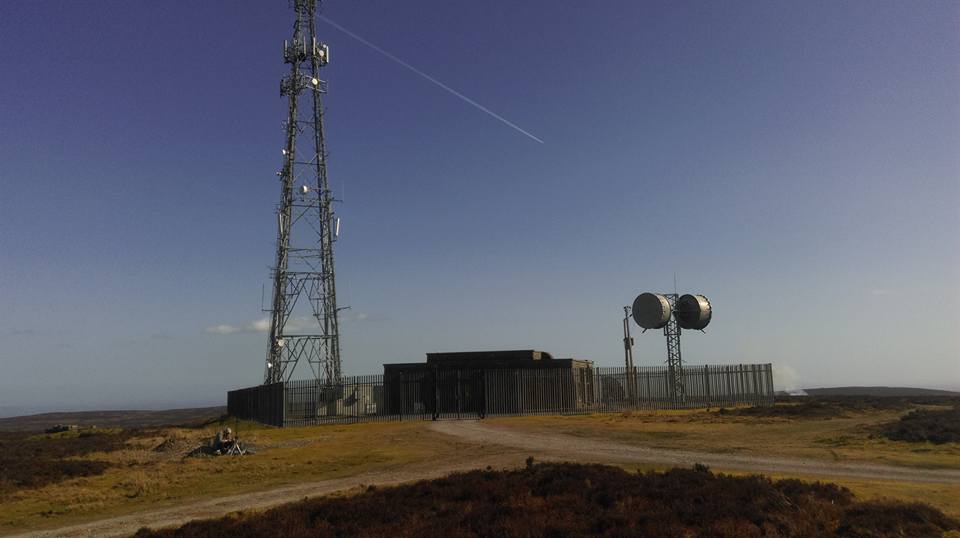 I was tired, but couldn’t help myself from thinking of an evening raid on Shining Tor G/SP-004 - my nearest summit - but not yet activated during the bonus period. Ah, but then I realised it was 80m CC CW contest night - and there was December to go at after all. 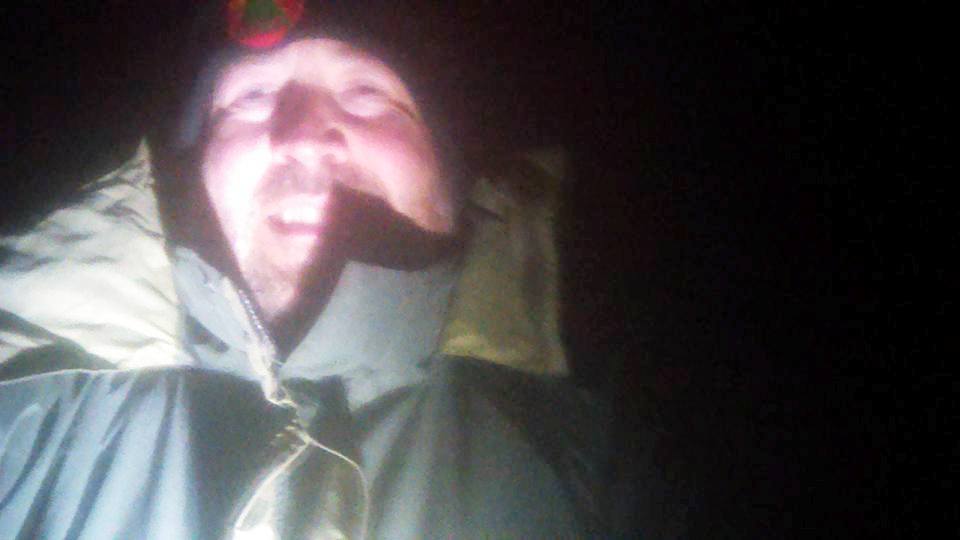 After bashing the Bencher morse key in the hsack for 90 minutes, I decided to go for it. I parked just before the Cat & Fiddle pub (still closed) and was surprised to see another car in the parking spot. The I could see a headlamp coming towards me down the path. I headed in the other direction, and despite my tiredness from the day, found I got into a decent stride. 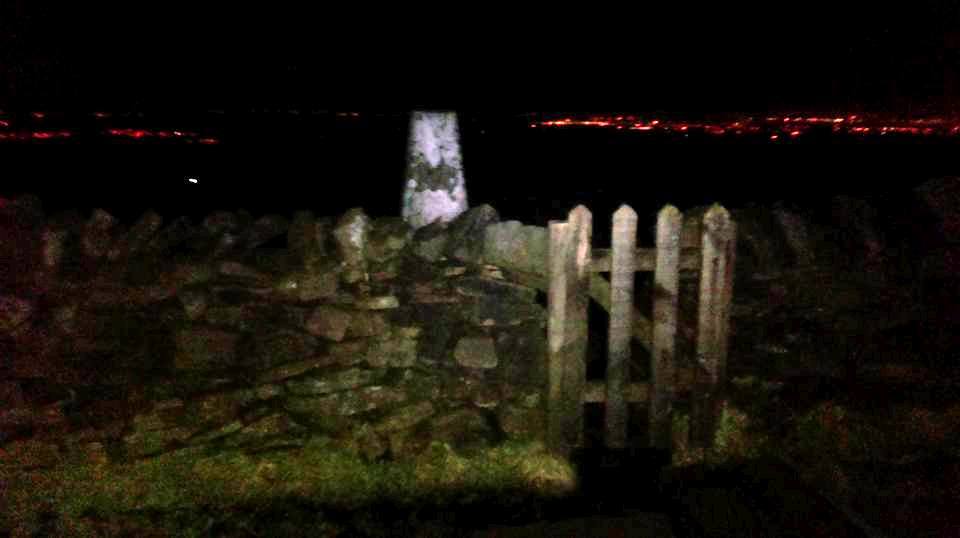 This was very enjoyable nighttime walking under a bright nearly-full moon and starry sky. I was on summit by around 2310 and took a few photos and posted a status update to Facebook. Just 5 stations were worked on 2m FM, but that was sufficient to collect the 5 points. I was kicking myself for assuming that my handheld was pretty much charged up - when it wasn’t. Jimmy M0HGY did call me from home, but the charge did not survive and the contact was not quite completed. Callsigns were exchanged, reports were exchanged, but the final acknowledgement of the received report was only one-sided - so we scrapped that one. 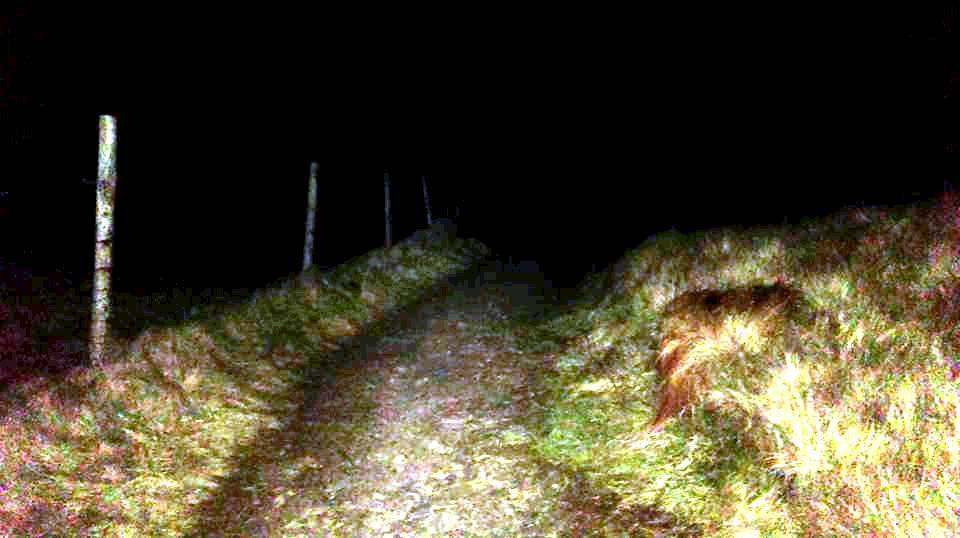 I was starving when I got home about 0115z but couldn’t find any bread or suitable things in the fridge. Fortunately, in a bag in the shack was an unopened chocolate reindeer left over from Christmas. It is now an ex-chocolate reindeer. It has expired. It has ceased to be. 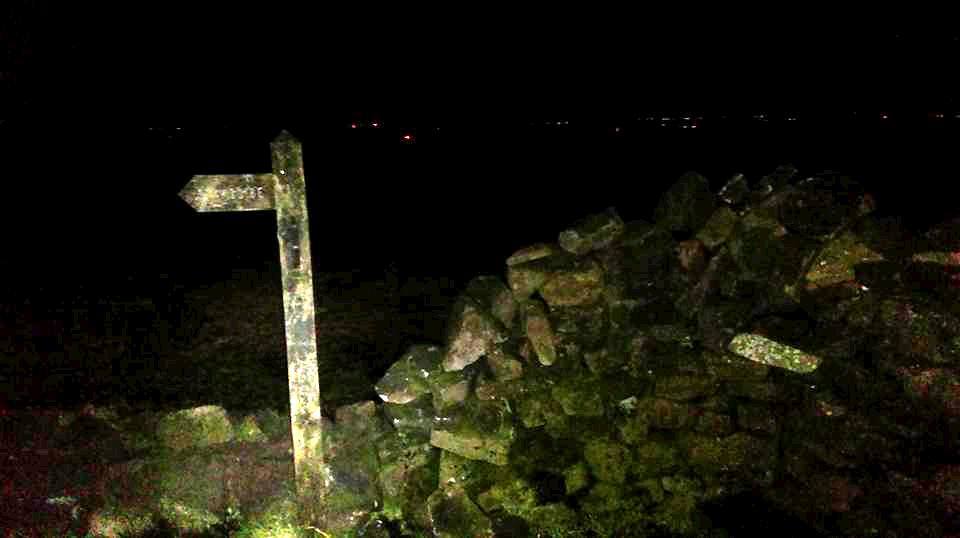 A couple of days earlier, Monday 13th March 2017, I headed out to the Clywdians for some winter bonus point collection. 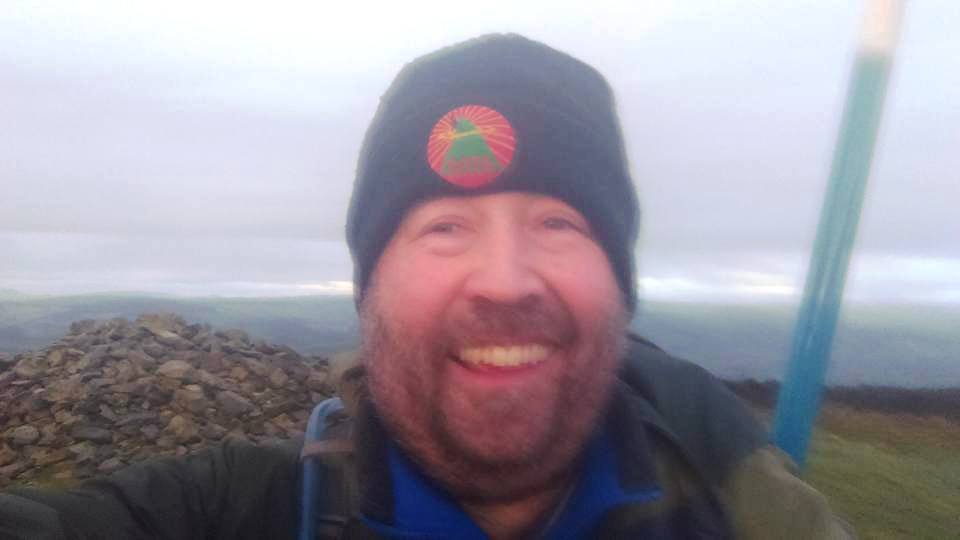 Foel Fenlli GW/NW-051 started well with another contact with ZL1BYZ, but this hill definitely gets steeper every year I get older! In fact the lower zigzag section was so treacherously slippery with slimy mud that I avoid it on the descent and cut across to the Offa’s Dyke Path from the bottom of the step section. 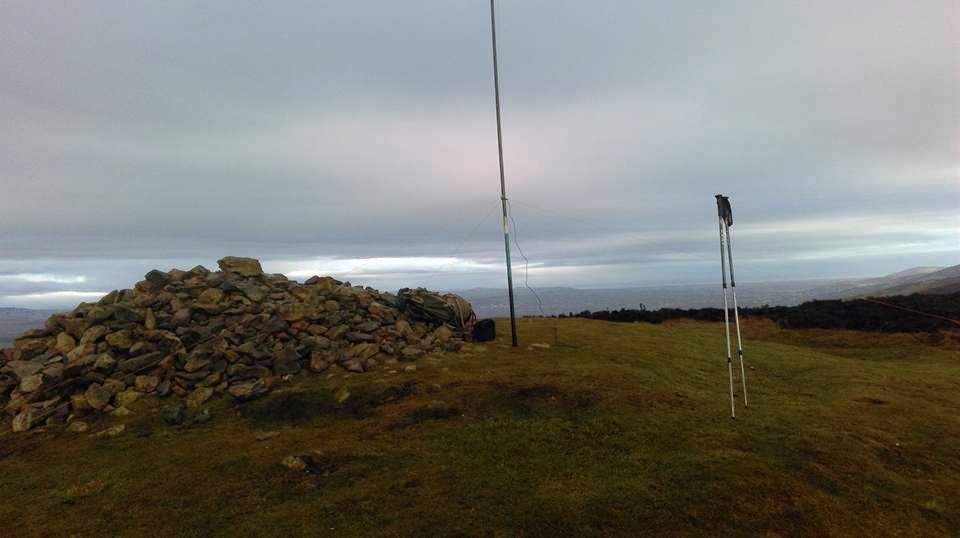 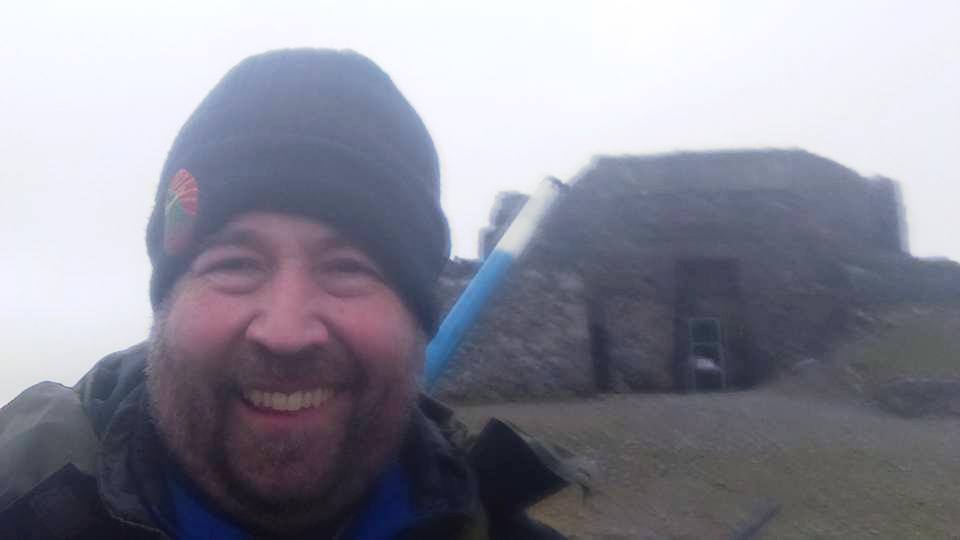 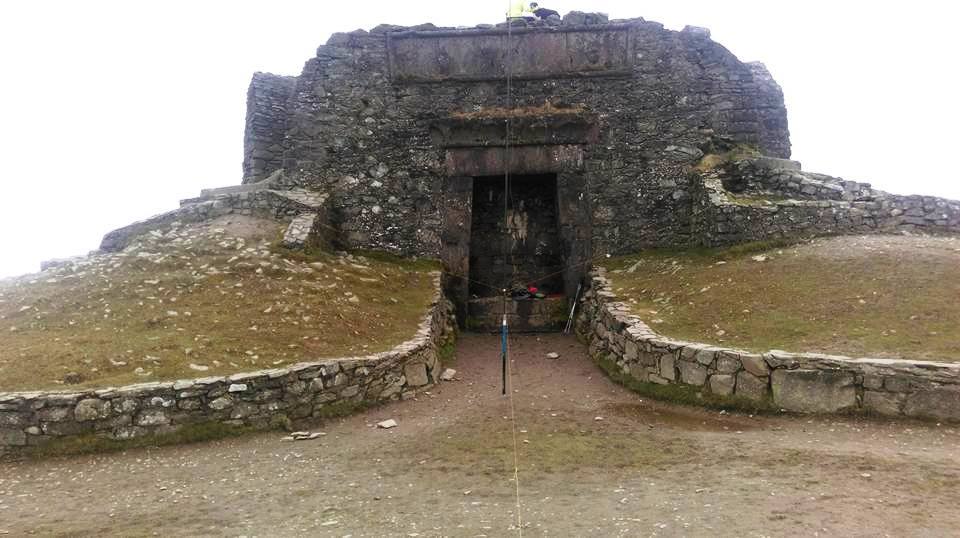 I had time (or so I thought) to squeeze Penycloddiau GW/NW-054 in as well, so that was the next stop. Conditions seemed slightly better now with 10 QSOs on 20m CW including NA and EA8, and a couple on 2m FM, including S2S with John GW0MHF/P on Moel Famau GW/NW-044. I had met John ascending as I was descending Moel Famau earlier. 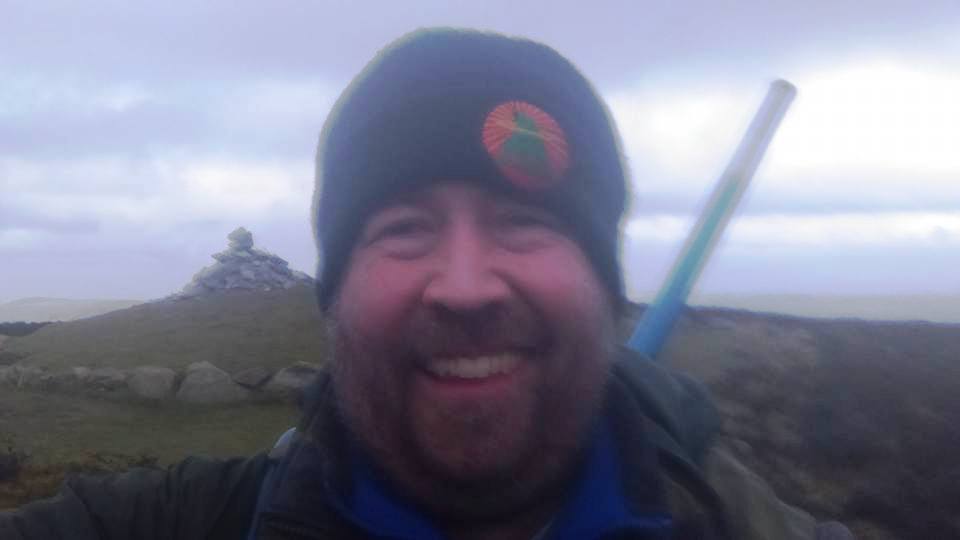 Back at the car, and to the main business of the day - meeting at the Passport Office in Liverpool to sort out mine - which I had put through a wash cycle while on holiday in Tenerife the previous week. I had an hour and a half to the meeting, but it was only an hour’s drive from where I was, so no problem - just put the SatNav on Google Maps on my phone, and off we go. 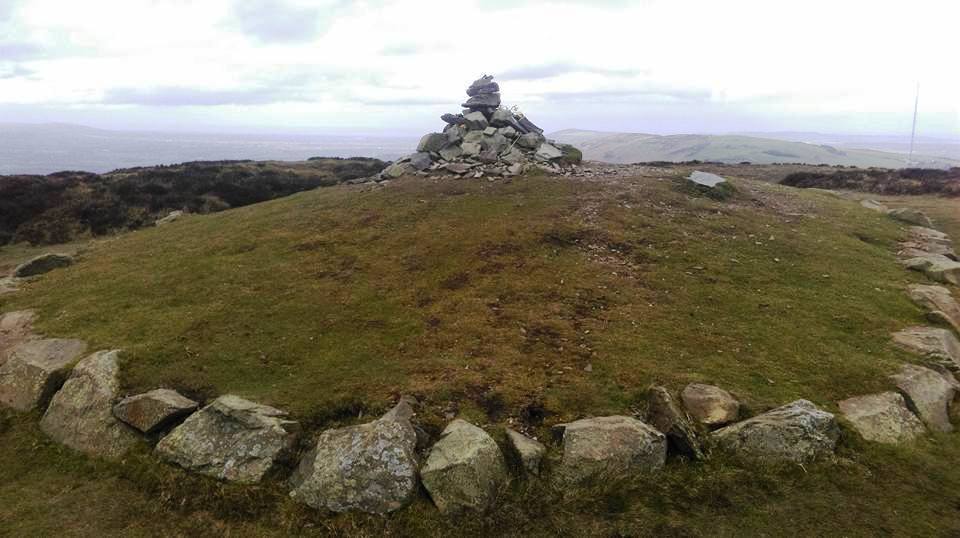 Disaster! Phone was dead. Out of charge, and refusing to accept any new charge. That half-an-hour slack time was now looking wholly inadequate with having to find my way back to the main roads and then to the right part of Liverpool, plus parking etc. Anyway, as it turned out, I made it bang on the minute of my appointment, after some frantic asking of pedestrians for directions and the appalling spectacle of a 20 stone bearded man sprinting along Old Hall Street in Liverpool city centre.

I needed it though, as I have some gigs out of the country in a few weeks. Thankfully, the new one arrived this morning.

Disaster! Phone was dead. Out of charge, and refusing to accept any new charge.

Some contact cleaner and a toothpick usually gets it sorted. SOTA is a regular cause of this issue, well at least for me it is on two different handsets !

Hello Tom. Thanks for the reports, very entertaining. You have a great “turn of phrase”, it is a pleasure to read your descriptive text. Thanks also for allowing me, as a chaser to have played a small part in your activations of 15/03/2017, GW/NW-042 and GW/NW-043, both using 2Mtr. FM.
Best Wishes, 73 de Paul M0CQE.

Another local summit I hadn’t yet activated in 2017 was Gun G/SP-013. I had a couple of hours free on the afternoon of Thursday 16th March 2017, plus I had picked up a Samsung S3 Neo mobile the other day, so there was a possibility of getting SOTA datamode operation going again.

I decided to use the 20m band, but the usual operating position - sat at the base of the SOTA Pole within the radials of the groundplane - caused issues with RF getting into the Wolphilink interface in the past. So I opted for the new 10m Travel Mast to get the feedpoint around 3m higher, and a coax extension cable that would enable me to sit well outside the “footprint” of the radials. 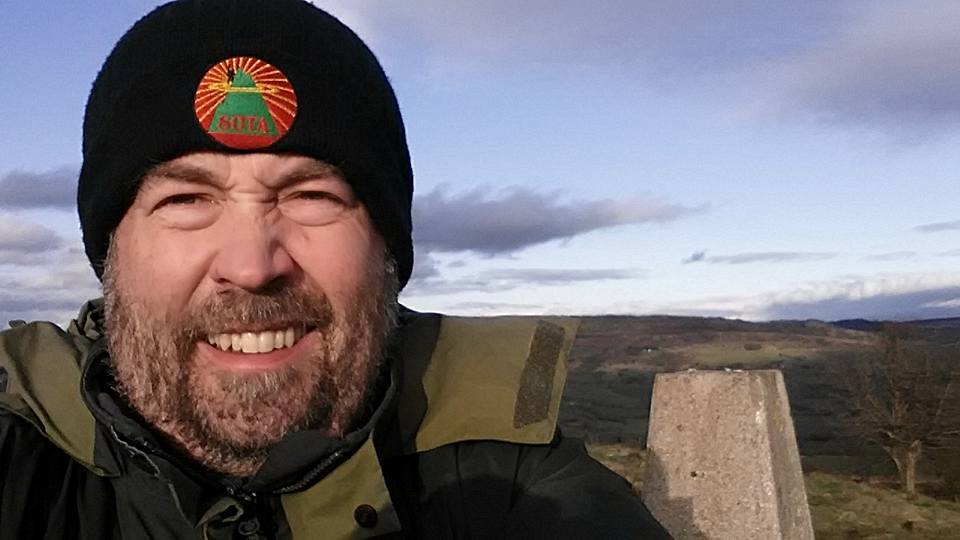 As ever, it was fiddly to get everything up and running after a long period of not doing datamodes with my portable set-up. I was racking my brains to try to remember how to set the various volumes within the phone’s settings, and how to pair the Bluetooth keyboard with the phone. Once I thought I finally had everything set correctly, it still wouldn’t work. Then I spotted that the mode on my FT-817 was still set to “CW” and not “DIG”. I corrected this - and hey presto - my system was receiving AND transmitting.

I found a gap in the waterfall, self spotted and did some considerable periods of calling CQ SOTA. There were no takers though, and I feared the worst - or at least that I still hadn’t managed to get my PSK SOTA system working again. 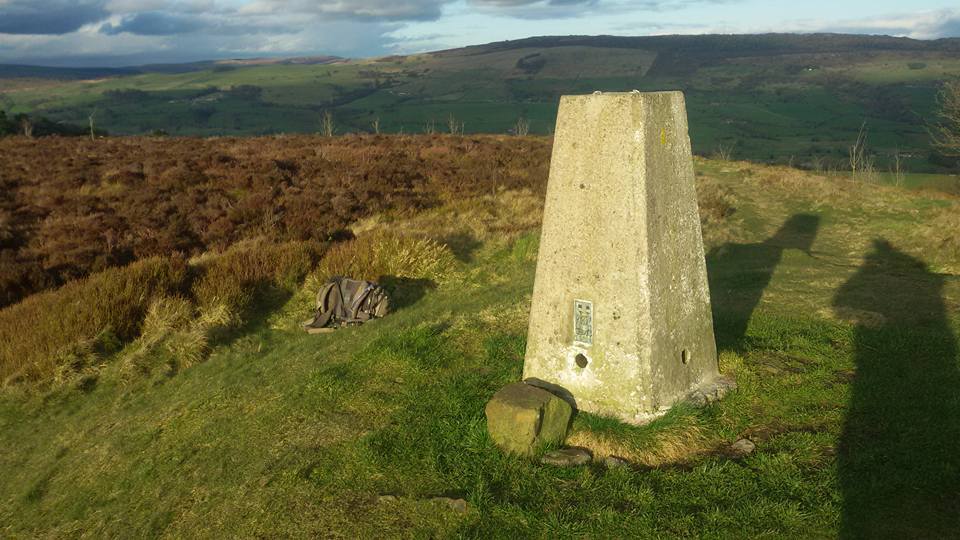 I found a very strong CQ call from IK6CVI and went back to him. Well I tried to. This was when I noticed that my “de” reply macros were not responding. I checked in the code, and to my surprise found there was no or in there. I corrected this and now the buttons were functioning as anticipated.

I tried again - and this time a PSK31 QSO with IK6CVI ensued. Right, good, my system was up and running again. Now the temperature dropped sharply, the wind picked up and it started raining. My initial instinct was to quit now with the data stuff (I had got it functioning, which was the main aim) and go to CW. I then gave my head a small wobble and started packing everything up! Just before walking back to the car, the point was collected courtesy of three QSOs on 2m FM with the VX7R.

By the time I got to the car, it had started to go dark, and even colder and wetter. The heater was cranked up to max as I set off home.