Confessions of a cheater

Yes, you may call me a cheater, a liar, a swindler, a ~whatever you want~ . And the clear response you’ll get from me, will be an euphoric grin from ear to ear

But before you really can accuse me of having cheated, you first have to wait nearly a year. Because the stumbling block, or should I better say stumbling summit

, has right at the moment still a valid SOTA reference.

The Schönbichler Horn (OE/TI-039), a 10 point summit in the Austrian Zillertal Alps, is with its height of 3134m ASL far from being a SOTA bargain. Unfortunately, its prominence of less than 150m will bestow this beautiful summit a short SOTA life

Nevertheless, it would have been a shame to not activate this nice summit.

I started my excursion Sunday morning at abt. 01:30 UTC with a 120km drive by car to the Schlegeisspeicher, a well known artificial lake in the Zillertal Alps. From the car park I continued my tour by bicycle, a couple of kilometers along the beautiful greenish lake. The following photo has been taken on my return back to the car park, because early in the morning it was still too dark for taking photos of the landscape. As soon as the path got too steep, I left my bicycle behind and continued by foot. During the hike scenic impressions from this wonderful landscape caught my attention: The last part up to the summit involved some scrambling, which isn’t something outstanding here in the alpine region. On this day difficulties got a little bit more increased because of the cold night, below zero, and precipitation the surface of the rocks were partly covered with a thin layer of ice. During my stay on the summit, I heard from several people that they slipped on these rocks, fell down and hurt their legs. When I arrived on the summit only two other mountaineers were present. Shivering, because of the low temperature, they soon descended and I had a little bit time to set up my SOTA equipment, before other hikers came up the summit. I was rather early here on the top of the summit, that allowed me to enjoy the great view to the surrounding mountains. All of them pretty well known and all of them don’t have a SOTA reference. Unbelievable! And of course the following SOTA activation was pleasing as well. Despite the not so good HF conditions at the moment, all in all 36 contacts on the 20m and on the 30m band could be logged. This time Roy, G4SSH, has been even faster than the automatic RBN spotting mechanism. Thanks for (manually) spotting! After the SOTA activation and the descent from the summit, I explored the area around the Schlegeisspeicher, with its huge retaining wall with 131m height. Maybe it is worth for a new program DOTA (Dam on the air) I hope that after reading this report and watching the pictures you will understand that I’m far from having a guilty conscience, because this summit doesn’t fulfill the prominence rule. Far from it! I want to congratulate the corresponding SOTA region manager for having a talent for selecting such a summit.

Again thanks for all contacts.

PS: Please do me a favor, enjoy the report and don’t add another discussion about SOTA rules to this topic.

What a nice summit ! Wish I could be there …
Vy nice pictures.
Good luck es cuagn from a summit.
73 Tonnie PA9CW

That’s an impressive piece of concreting Stephan, not a buttress to be seen! A Google search found this impressive picture that puts your pictures of the lake and dam into context. 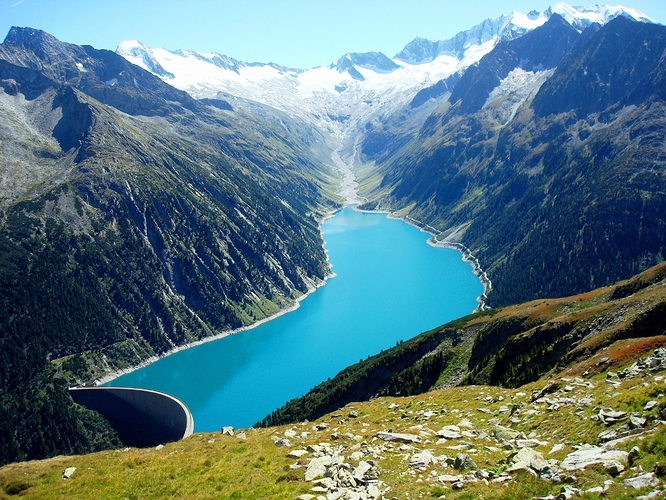 Yes really nice photo, or this one, picture taken during a SOTA activation of a nearby summit in '2013 I love your articles, Stephan, such a nice description and pictures.
Make me do a virtual trip up there.

Thanks for sharing, take care on summits. VY 73
Ignacio

Great title and fantastic photos. Thanks for sharing.
73
Andrew
K1YMI

Rather interesting report there.
And the pictures love them such stunning views.

Y&ou should score bonus points for the photos! Fabulous!