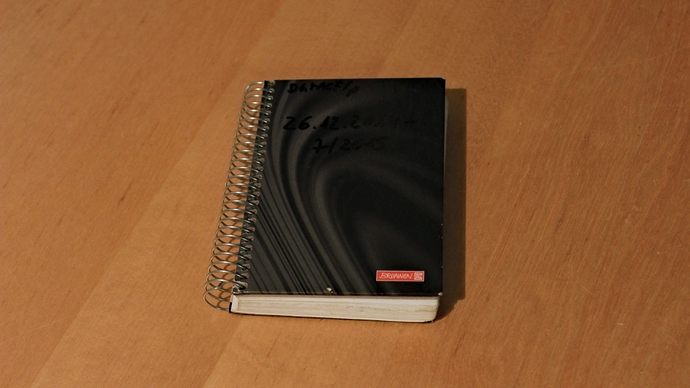 When I started SOTAing way back in 2014 I took this notebook that was lying around in the shack passionately waiting for a purpose. Not that ugly and a rather usual /p logbook, I reckon. To keep privacy, I wrote the dates in black on the dark-grey cover. It served me well but when it came to July 2015 it was full.

I went to the all-is-a-euro-store around the corner hoping to find something similar. What I got was not really what I had in mind before entering the store. There were loads of ugly notebooks each a Euro and I chose the two least-ugly. So the puppy with earplugs became my second logbook followed by two duckies. 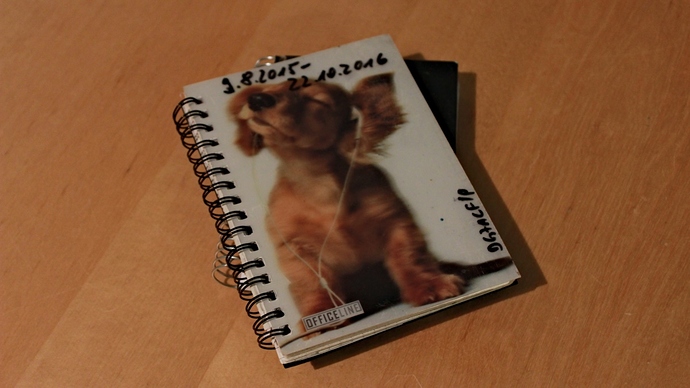 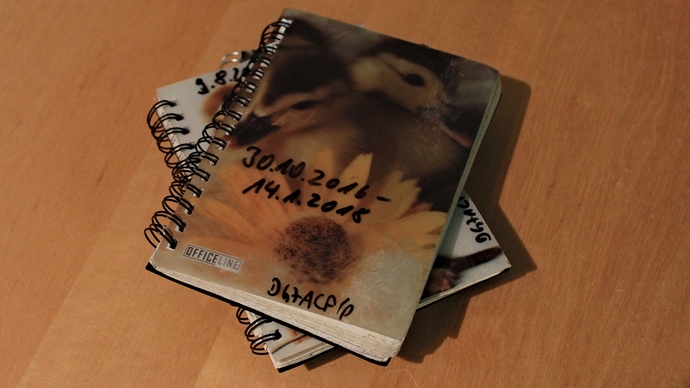 Yes, the pics are sharp. The covers have a fancy 3D effect wich blurs the pictures a bit but it makes the real appearance even more horrible. This applies to my next two logbooks, too. As you can see I’ve recently had to change the logbook and again went to the cheapish store. I thought I was prepared for the bad taste I was to be hit by. Nope! Not like last time, when I had to decide wether ugly or nearly as ugly as the ugly ones. This time, the only way to walk out this store proud and upright and with two new logbooks was to chose the two most appalling ones and declare it satire. And so this became my current logbook: 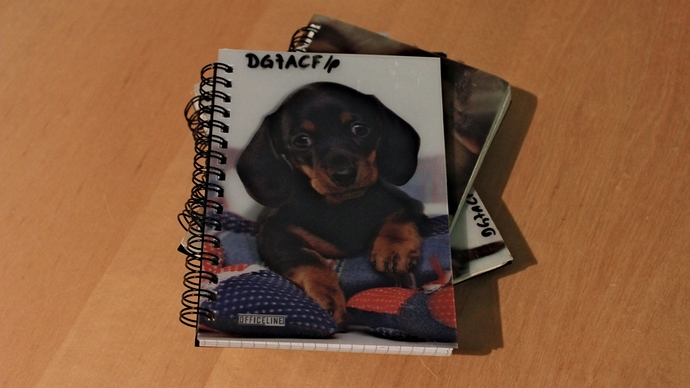 Please don’t make tasteless jokes on this puppy! He obviously suffers from TBE. Glad, you can’t see the 3D cover in real life!
Don’t look at my next logbook if you’re faint-hearted! It raises the TBE-puppy for miles. 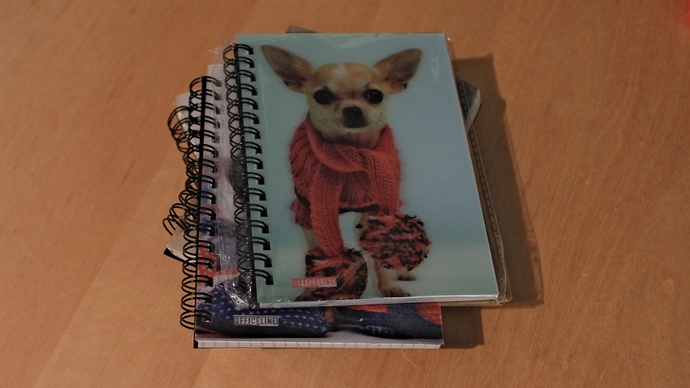 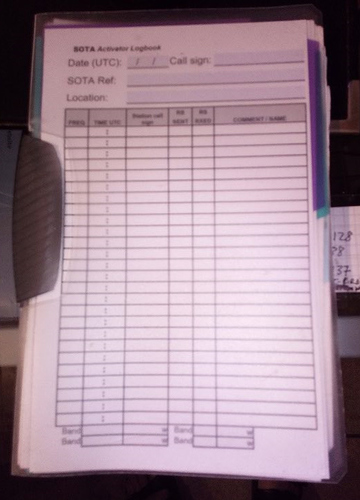 But I got a surprise as one of my birthday presents from my wife, she had got this especially printed: 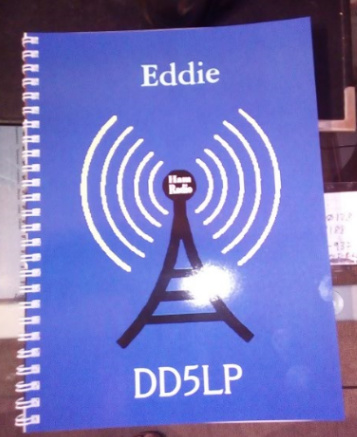 Then again perhaps I should get some of the log books you have Pom, considering my “assistant” on my last activation - Bonnie 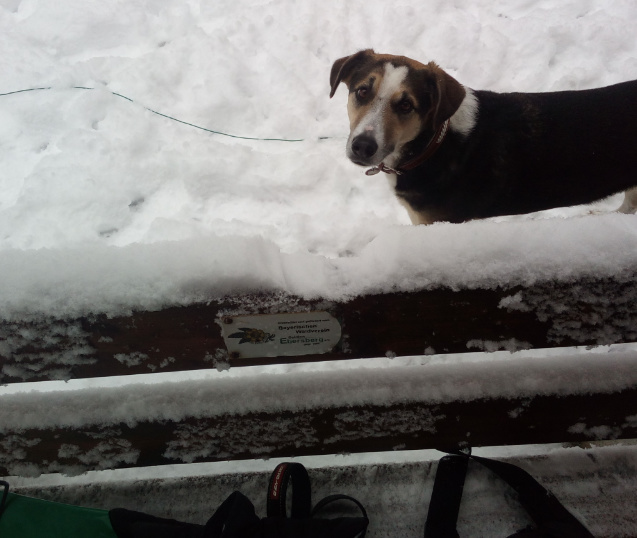 Well, they are bound to get dog-eared in your rucksack

This logbook has served me well for many years! No dogs were humiliated in its production either. 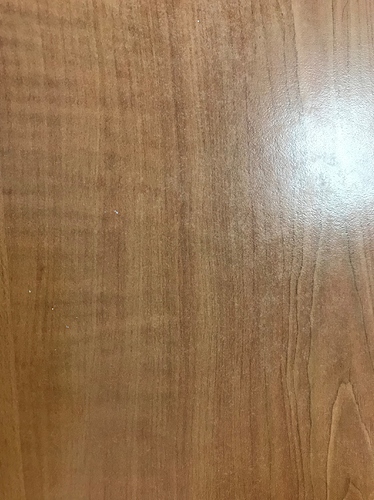 No dogs were humiliated in its production either.

The converse is true - I expect many canine legs were cocked against it, in its formative years…

To my mind writing your log directly onto the tabletop is not practical for activators: Only a small fraction of summits are equipped with tables at all. In the lucky case there is a table on the summit another problem arises. Transfer of the log to the SOTA database typically is later done at home. So you have to take the tabletop with you after activation. This not only significantly reduces the number of available tables for subsequent activators. To my mind this is also a breach of the General Rules “Activators may not cause any damage to the environment. This includes damage … to the mountain itself, walls, fences, livestock, buildings, wildlife, trees, plants etc.”

Of course bringing your own table to the summit would solve this problem. But in the end logbooks are easier to carry than tables.

It would surely be more practicable Michael to bring an axe and chop a piece out of any log you happen to find lying around in the forest as you ascend towards the summit, and save the woodchips for later. Build a fire at the top of the hill using the woodchips - this keeps you warm in the worst of weathers. When you make a QSO, simply dip a pointed branding iron in the flames, and write details of QSOs in the wood with your branding iron. You can then easily transport your mini-log back to the truck for transport home. Job done!

Sure you want to see this? … It’s really disgusting … Here you go …

Yep - that one really takes the biscuit.

I have only used 2 SOTA activator log notebooks so far.
These are: 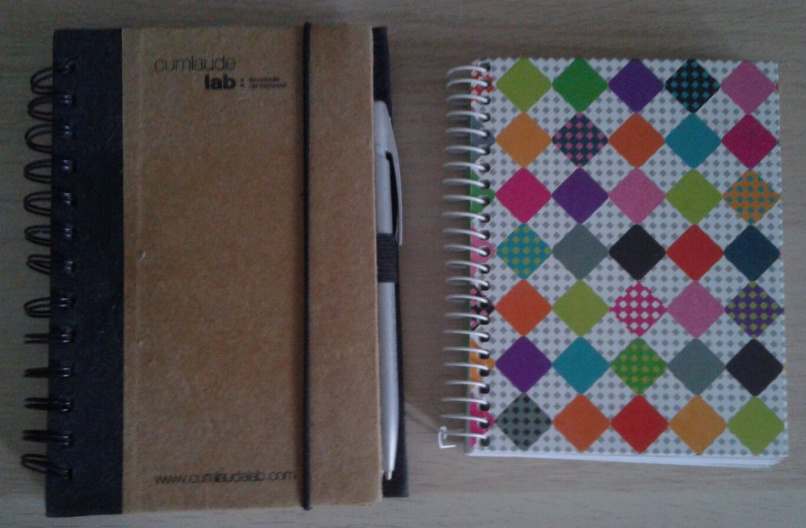 Not nice, not ugly but they serve well for the intended purpose.

I pick up cheap water resistant logbooks via eBay.

My logbooks aren’t ugly though, well, not after they’re modified to colour I’m most associated with! 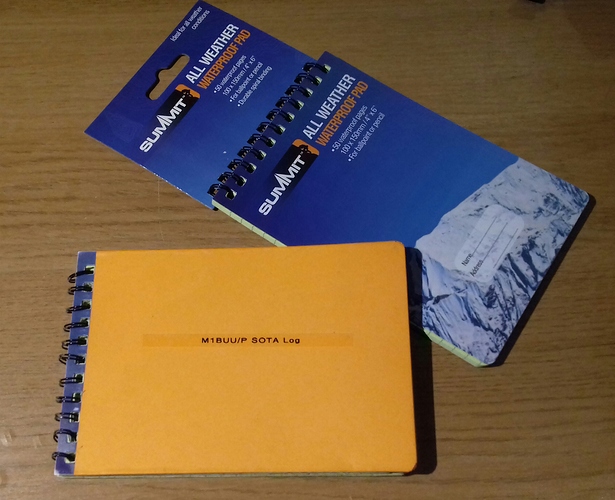