The term cloth-eared is used to describe someone who cannot hear very well. And it perfectly describes my performance on F/MC-184 Signal de Beausoleil today.

But more on that later when I cover the CW…

F/MC-184 is a wooded summit just north of Limoges. It is a drive-on summit and has a parking space just the right size for us. 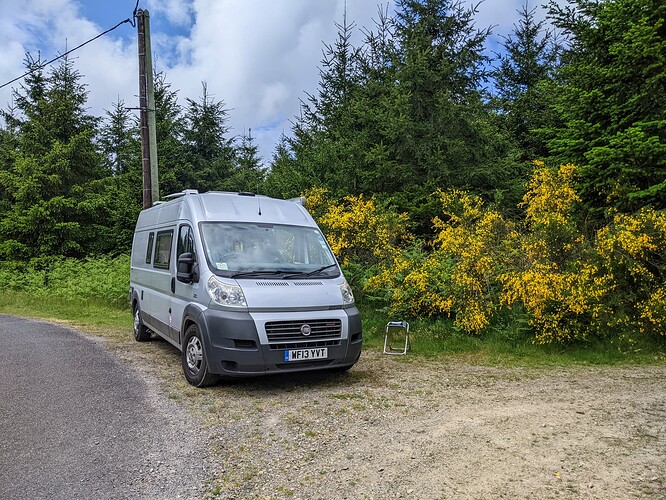 There are two masts on the summit which didn’t appear to generate any QRM or at least not in the HF bands I was using.

A path goes into the forest and I set up along this. Apologies for the legs! 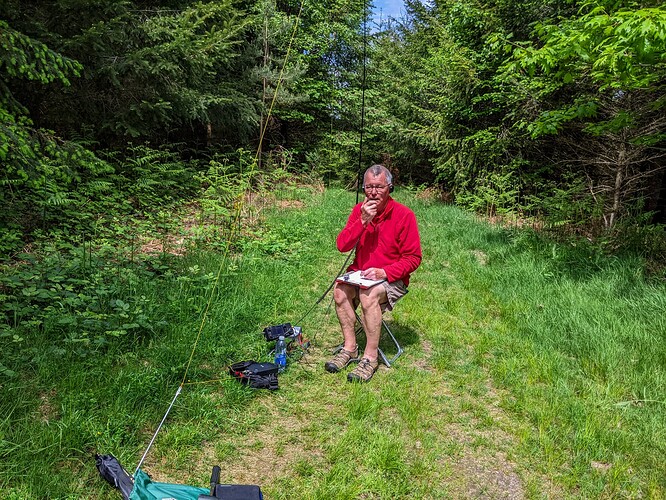 It was cloudy when we arrived but the sun came up just as my wife took the photograph above so I put on my hat and moved into the shade. 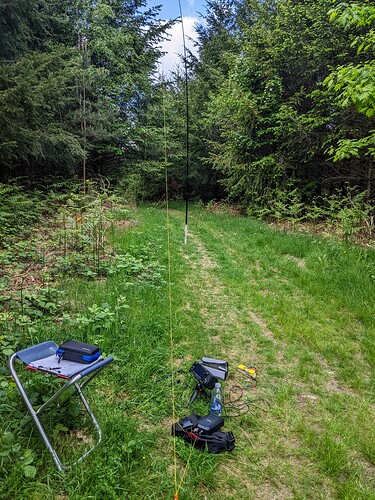 Opening on 40m SSB EA2DT Manuel was first in the log. A S2S with F/HB9EVF/P followed by one more S2S QSO with DL1CR/P. I thought I had managed another with Martin, M7BIA/P on the popular Shining Tor but I see he has not recorded it. I could just hear him give me a signal report but he can’t have heard my replies. I will amend the log to delete this entry.

My signal reports were very low and checking the radio I saw it was only running on its internal battery and putting out 5W. The external battery, which would up the power to 10W was connected but it wasn’t doing anything. On checking the in-line fuse I discovered it had blown. Once replaced we were back on 10W but why it had blown I’m unsure. It may have happened when I connected it. This has not happened before but I think I will add a switch to the lead.

I had finished on 20m SSB and quickly scanned the higher bands of 17m and 15m but I couldn’t hear any activity so I changed to 30m CW and sent out a CQ call. Nothing happened and later I discovered even the RBN network didn’t pick me up.

Changing to 20m CW was an improvement but at this point I put on the cloth ears!

I wrote DEG4OBK in the log, later I compounded the error by adding DE9A2N. Of course these should have been Phil, G4OBK and Dragon 9A2N in Croatia!

Here is a map of the crime scene. I blame the sun giving me a touch of sun-stroke. 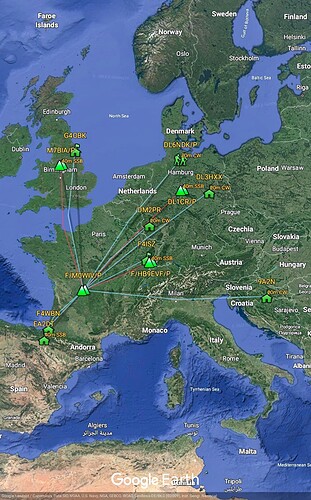 Very many thanks to all chasers and I will try to engage my brain better next time.

This sounds like a nice “stop off en-route activation in France” John. I’ve done a few like that myself on trips, but without the comfort of the motorhome / camper van. Keep bashing away with the CW and it will get better and more enjoyable and try and spend many hours of making QSOs from home if you can, which will make a difference.

Talking about France - good to see Roger F5LKW/P QRV on SOTA recently he has moved “up north” and is operating from some of the rarer FL/NO summits nearer to Paris. Roger has provided me with a few ATNO SOTAs this last week.

The good days are here on the radio on the higher bands. Last night I worked ZD7BG (St. Helena) on the 50 MHz band at 1823z. He worked loads of GM and G stations in a long opening. I guess it was Es coupling into TEP as EA/CT/ZB2 stations were coming in at the time. FT8 mode. The 6 element LFA Yagi I erected last August finally proved its worth.

73 and enjoy the holiday if you are still out there…

Phil, thank you. I’ve been doing a bit of CW chasing over the weekend. This mode has the advantage of being silent so it doesn’t disturb the other campers around us.

Still two weeks left in France and hopefully I can squeeze in another summit or two.