Another beautiful SOTA day weather-wise. I picked Cat Law as it has a good clear take-off to the south and I wanted to try the UKSMG 6m contest as well as SOTA. The latter went well, the former…not so good.
Although less than 30 miles from my home QTH as the crow flies, Cat Law is 1 hour 20m by car. Its a 2 pointer with nice views South over Angus and over to the coast, and great views of the Cairngorms to the North.

Looking South, with Loch Lintrathen in the foreground 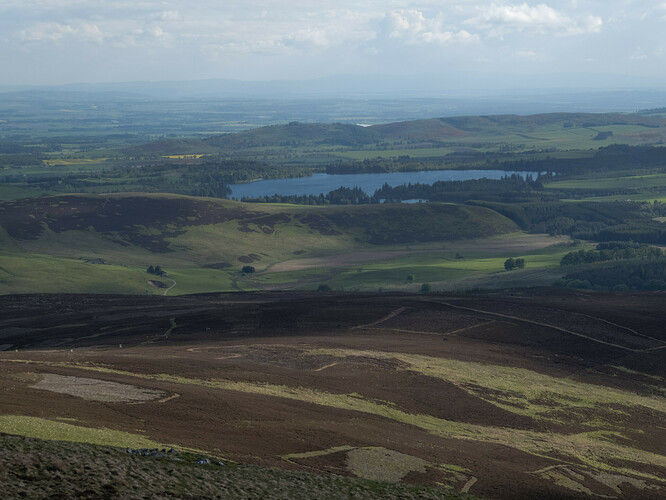 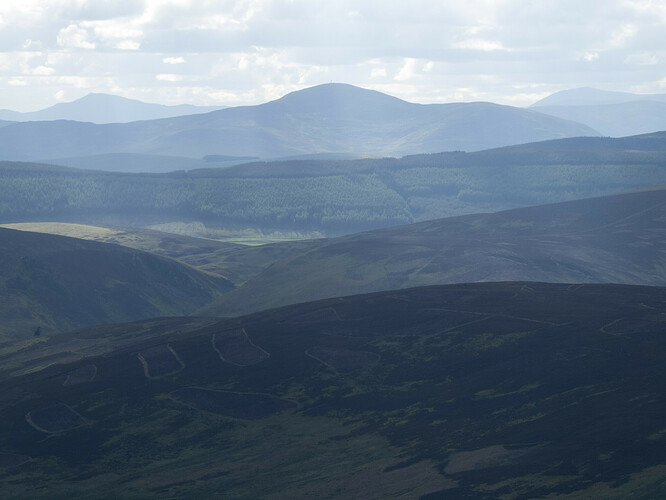 I used the Walkhighlands info, parking at the entrance to Balintore Castle after a drive along single track roads from Kirriemuir. After a brief chat with a guy living opposite who was getting ready to mow his lawn, I walked back up the road to a farm gate opposite Knowehead of Auldallan Farm. The gate needed a good heave to get it open and shut. There is no track in the sheep field and the next gate is not visible until you get over the rise. The proper track starts on the other side of this second gate and shortly after there is a third which is locked, but with a stile. Its a good track all the way to the top, with a series of grouse butts about 1/3 of the way up 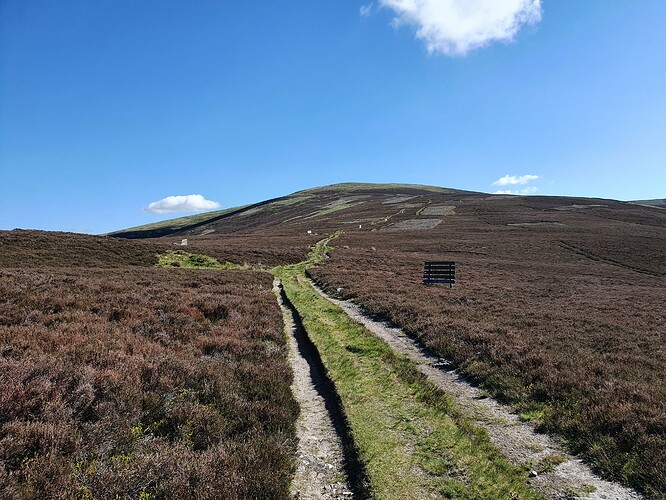 Arrived at the top after about 1 hour 20m and set up in gentle breeze not far from the trig point, pausing to chat with a chap walking his dog who wanted to know what I was doing and whether it was a permanent installation(!). A few other walkers appeared during the day but didn’t speak to me.

Trig point and shelter to the right 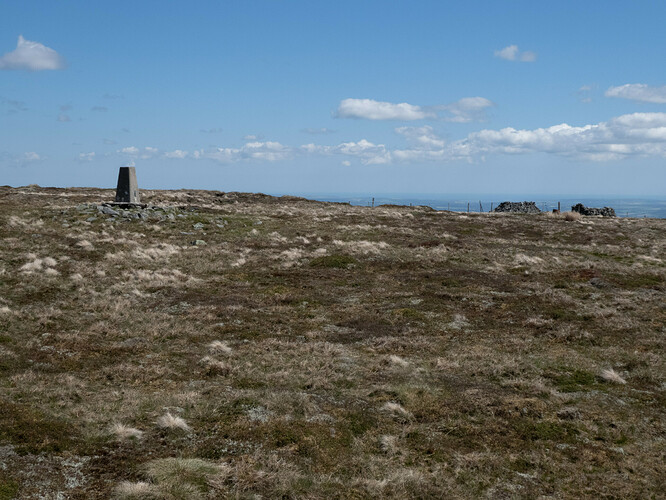 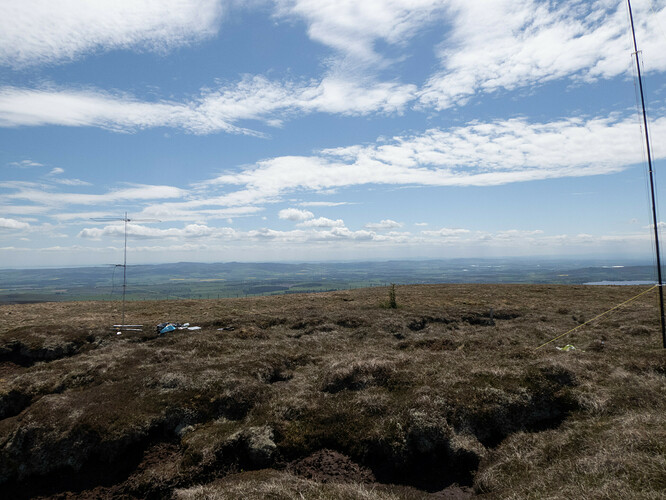 First QSO at 1115 was a S2S with EA2ESE/P on 20m. I took a look at 40m but it was very noisy with continuous static crashes. Went to 20m and had a nice run including 5 S2S. Checked 6m which seemed ominously quiet, but managed a QSO with Paul,G0HEU/P, who was operating from Lindisfarne with the great loc IO95CQ.
10/12 and 15 seemed dead but 17m was in reasonable shape, so I spotted and had a short run which included W3RE, who was my first transatlantic on this band. LA3NGA also called in for a S2S. A couple of Japanese stations were very strong but working heavy EU pile-ups.
I then managed a difficult S2S on 40m with I1WKN/P whom I could barely hear through the static.
Checked 6m - still dead. Went back to 17m and got another 2 S2S and a QSO with CT7ANH/MM who was a lone sailor in the Bay of Lagos off the Algarve.
I then spent an hour on 6m. QSO 001 was with G0H/P who was G0HEU on Lindisfarne and this turned out to be my only QSO of the day on 6m. I heard a few stations and at one point C4I in Cyprus heard me as he queried XP/P before losing me in the QSB. 5B4AAB was also audible working an EU pile-up. Apart from those, I could hear G0H/P calling CQ but I didn’t hear him make a contact. An F4 faded in and out and then I hear 9K2NO down in the intercontinental part of the band; later on I also heard A71VV. However, nobody heard me, I heard no beacons and nothing in the CW part of the band. I gave up and went back to SOTA with another nice run on 17m including best DX of the day with K4DY in NC.
With increasing cloud and wind getting pretty strong, I gave it a final shot on 40m which brought a good run until a final QSO at 1617 local. I then packed up the DX Commander, took a final look at 6m - nothing, packed up the rest and headed down.
73 QSOs for the day and 13 S2S, the best DX of which were SV2OXS/P and SV2NCH/P, both on SV/MC-049 on 17m.
Thanks to all and see you next time - not next weekend, as the XYL is away and I will be on dog-sitting duty

I will be on dog-sitting duty

Can’t you take the dog with you to the mountains?
That’s the perfect plan for my dog… and for me too.
73,

the dog with you to the mountain

…did you not see?

I wish. I have 2 young labradors and they get bored very quickly just sitting around when there could be rabbits and deer to chase ( not to mention sheep…). There is no way I could take them on an activation on my own.

… pausing to chat with a chap walking his dog who wanted to know what I was doing and whether it was a permanent installation(!).

I’ve had this happen to me twice! I just don’t know what goes through some people’s minds - they must be living under a stone or something.

Many thanks for the excellent report Simon. I noted you were out, but I was radio-less down in Cornwall. It looks like a nice summit, through probably impractical for me to activate unless I find a suitable place to stay in that area… and the opportunity to go there of course.

I’ve had this happen to me twice

I’ve had this happen easily over a hundred times. I’m sat there, in the heather, with a fishing rod pointing to the sky, and people say “When did that get put up? It wasn’t here when I walked up last Christmas”. When I reply “About 15 minutes ago” they seem genuinely surprised, as they do when I explain I carry it all up and down in my rucksack!

I have the same, in fact moreso, when I’m in my bothy bag. Despite the bag draping over me in the obvious shape of a sitting human, I hear “That wasn’t here last week”, “It’s a weather monitor”, “I wonder when they’re going to come back up and remove it?”, “I think there’s a body in there” and even people prodding and stroking the bag around my head.

Thanks for the excellent report. Good run of contacts, sounds like you worked for them as well.

I wish. I have 2 young labradors and they get bored very quickly just sitting around when there could be rabbits and deer to chase ( not to mention sheep…). There is no way I could take them on an activation on my own.

I took next doors Springer Spaniel on a trip to Claife Heights. I had a mystery antenna wire breakage. This particular springer was well know for biting through his lead if you turned your back for more than 20 seconds. He was amazing well trained, but a bit like us old age give him the ‘whatever’ attitude. He ran off chasing Pheasants too on this walk, and appeared 20 minutes later after shouting. I’m sure he knew exactly where I was regardless. Thankfully with no Pheasant. He used to lift his head up in the air whilst running if you threw a stick or ball, then track left/right as required. Very clever. Just needed to be kept constantly entertained (or he entertained himself).

I’ve had this happen easily over a hundred times.

You are obviously more approachable Tom.

I do sometimes try to look deliberately miserable and grumpy in order to tacitly dissuade passers-by from interrupting an intense CW or contesting session when portable. However, generally I try to present as friendly and amenable, “doing my bit” to positively promote the profile of amateur radio in general and SOTA in particular. I’m not sure how to go about making myself appear less approachable inside a bothy bag though… 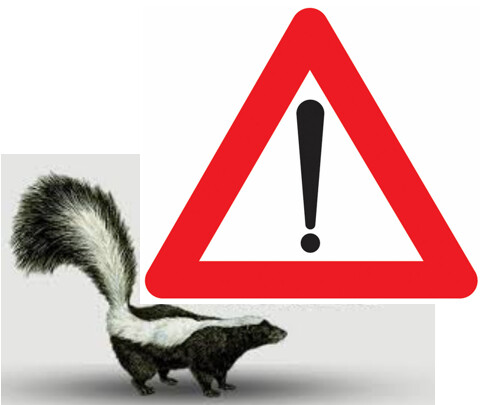 I’m sure it would work a treat.
Cheers,

unless I find a suitable place to stay

I think Kirriemuir would be an obvious location. There seem to be plenty of rooms and cottages - availability might be an issue of course if the staycation trend continues. If you do come up, maybe we could meet for a face-to-face…

So that’s what it’s like. Mist started low down when I was there in Jan 2012. Not much to photo apart from my ugly mug. Not so much grey 9 years back! 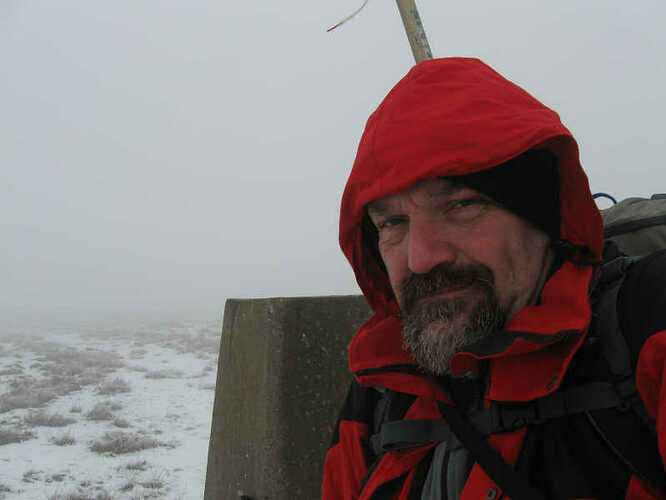 Comes naturally to some of us Tom

My XYL refers to that as my “resting face”

I see you were up there for over an hour in that. I think you earned your winter bonus points.

if you turned your back for more than 20 seconds.

Our youngest lab likes running off with things. If he’s in the garden when I’m working on an antenna I have to watch him like a hawk. A couple of my DX Commander wire elements have teeth marks in them! Luckily the insulation is quite thick.