Another couple of firsts today for our activation of BV/NT-025, Lion’s Head Mountain, a SOTA 2-pointer in Xindian District, New Taipei City. I wrote “our” because my daughter accompanied me for the first time doing SOTA. At 16 years of age she has more experience with mountain hiking than her old man because of the numerous school outings she has had. But today’s goal was to experience doing something together, a time-out from our regular lives, away from all the hustle and bustle. 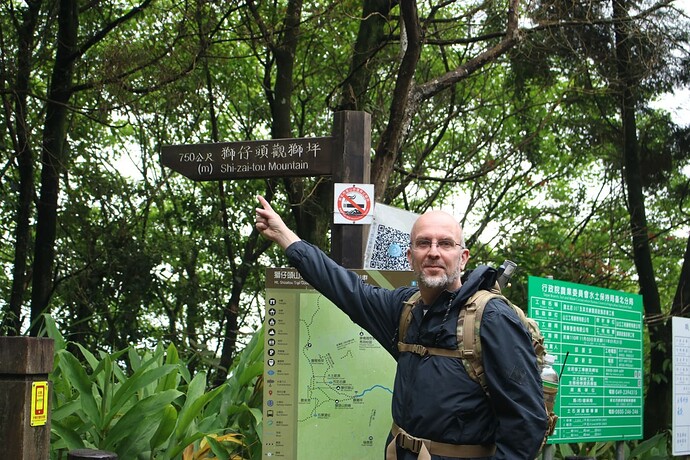 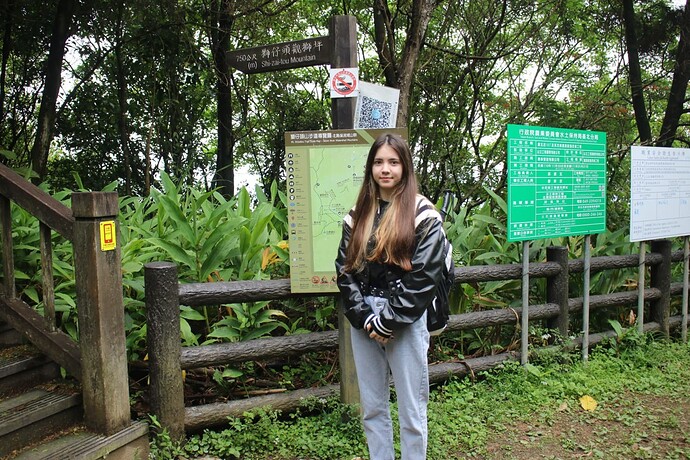 The weather wasn’t great to start with this Sunday and the rain had made the ground soggy, with the many fallen leaves making it slippery as well. Temperature only 17 C and foggy, too. I was hoping that by noon the weather would have improved a bit, but it actually became a somewhat worse and colder, so that was a first as well. BV/NT-025 is actually not the main peak called Lion’s Head, but the one in front, so aptly named “In Front of the Lion’s Head”. If you enter from the south it is really pronounced. 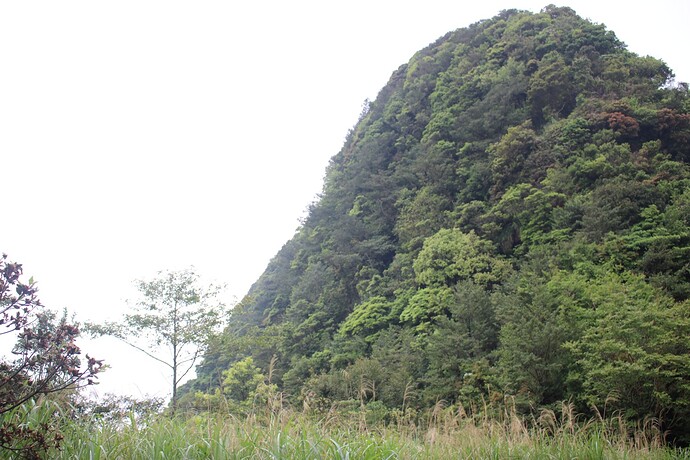 You have to climb a wooden fixed ladder and this is quite steep. 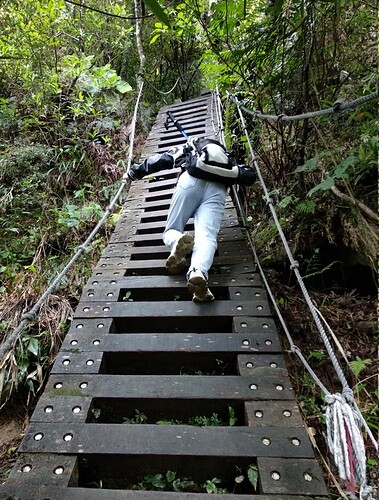 At the top not much there, just the trig point and not much of a view. 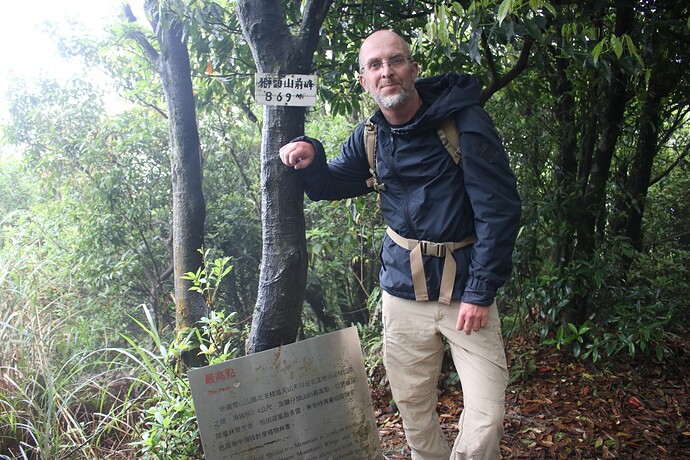 I quickly used a rock and a fallen sign post to set up my station and in 20 minutes I had six QSOs in the log. It could have been even quicker, but cell coverage was mediocre and I couldn’t get a spot out at first. But when I did the Kiwi with the best ears in all of New Zealand came back to my CQ: Andrei, ZL1TM. There were also JA1VRY, JH1MXV (he has chased me 5 out of 6 activations), YB1TIA (first time being chased from Indonesia), JF7RJM and JH7IOT. 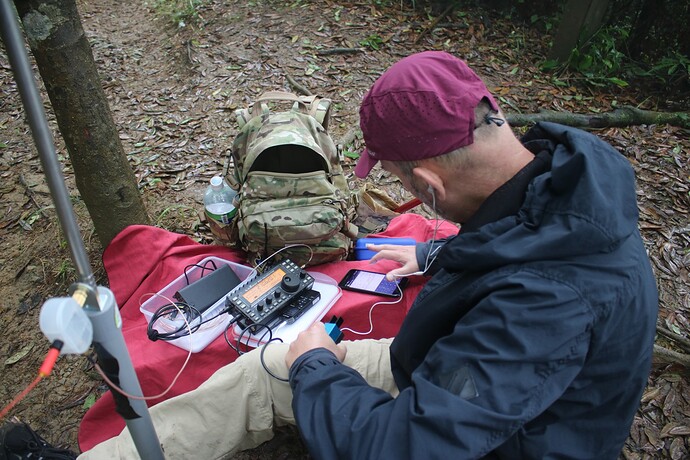 I was getting really cold and we were both covered by fog droplets now, so time to pack up and get warm by hiking. We walked the ridge and got to the trig point of Lion’s Head Mountain. 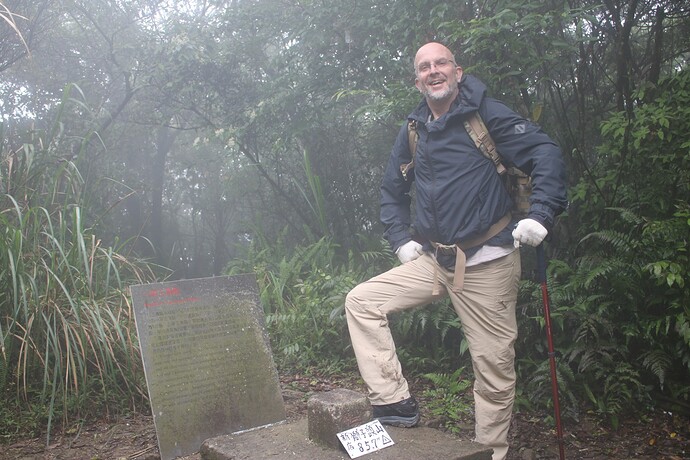 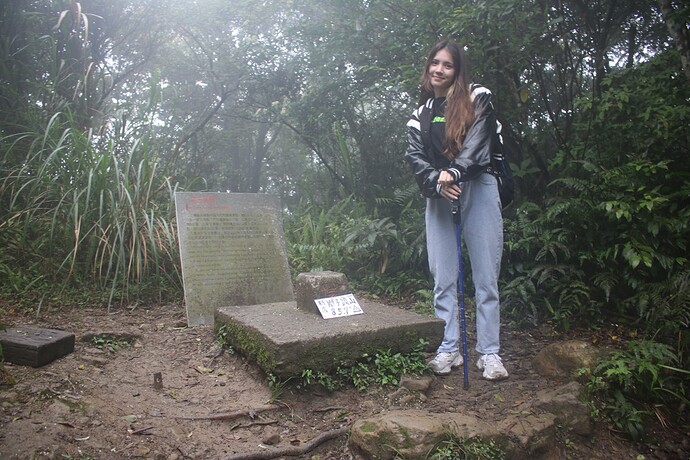 By then we wanted to get back to the car (also a first; my previous activations were all done by riding my scooter), but my daughter didn’t want to climb down the wooden ladder because it was so slippery. Safety first and I agreed with her, but that meant that we had to find an alternative way down. So we walked down all the way to the Lion’s Tail mountain entrance and then took an ancient hiking trail back to the car. 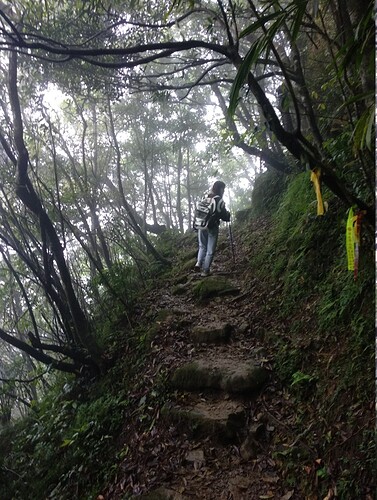 All-in-all we walked three hours without much rest and it was heavy on both of us. We didn’t encounter any picnic or resting place, so we skipped our planned lunch of hot porridge. Instead we drove down the mountain into Xindian to find the first McDonald’s Drive-thru we could find after which we chomped on hot french fries and corn soup in the car.

Not the most fun activation, or climb, but very interesting indeed and another good learning experience. Would I climb it again? Maybe, but only in better weather and going in from the rear, not the front entrance. My new backpack worked really well, although it is not the most comfortable pack to wear I found out. It is narrower than my previous pack, with a stiffer frame. It doesn’t hurt or cut into body parts, but you feel it’s there. For a day hike it’s fine, for a multi-day through hike it’s not. But hey, that’s why they call it tactical backpacks.

But the experience of hiking with my daughter was priceless. I’m really proud of her, because given the choice she would obviously not have gone out with me. But she did, because I told her it would be good for both of us…and it was.

Hi Hans, great report and photos of you and your daughter.

Interesting. I lived near there for a couple years and did a little hiking more than 20 years ago. But the big banana spiders were rather intimidating I thought. I lived in four areas during my time in Taiwan but hsinchu was my favorite. My mandarin is all but gone now. It’s nice to see the photos as that brings back memories of the tree-filled mountains.

Enjoyed the report, Hans, and great to be out with your daughter. I’ve crossed a few dodgy wooden bridges in Scotland but have yet to climb a wooden ladder towards a summit! Excellent stuff. 73. Mike

Hello Geoff, I am happy that you always enjoy my reports. Hope to give a little insight in how another part of the world enjoys SOTA.

Glad my report brought back some memories. Haven’t hiked in Taiwan for over 30 years, so I’m like a kid in a newly found toy store. I too like the Hsinchu area, but who knows once I go down south I might find another favorite. The temps are going up early this year and this weekend I will do another activation in 30C, the first of this year. Stay tuned for the report.

Yes, the ladder was the unique part of this summit, so that’s why I had to try it. Funny that nobody tried it before. Happy you enjoyed the report.